We’ve celebrated Christmas in Australia, the South Pacific, New York and Bethlehem. What could possibly top any of those? Well I heard about one place. A very, very magical place. And like a dog gnawing on a juicy bone, I became fixated on a dreamy Christmas that would top all the others. It could only be in the one-of-a-kind: Rovaniemi, Finland. 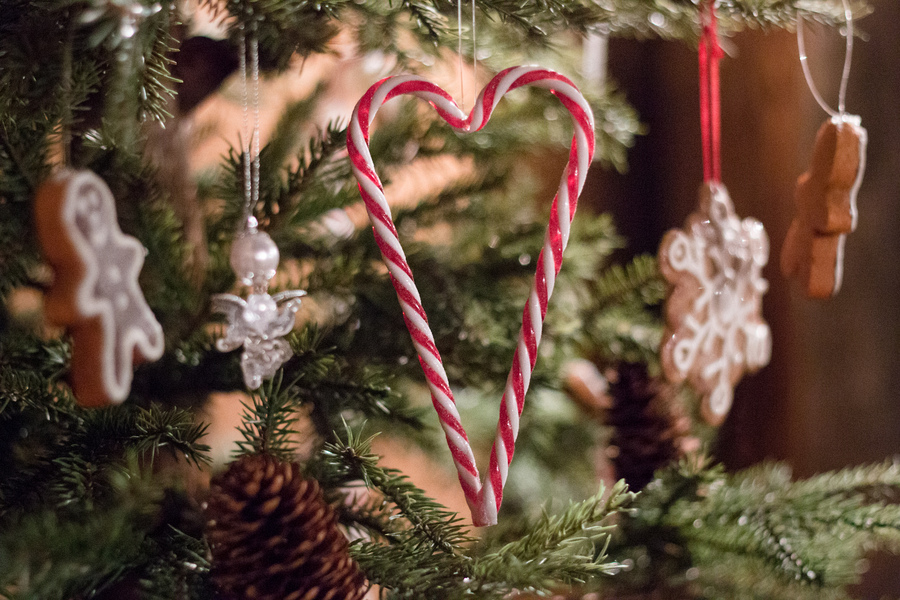 How To Get There

We were arriving from London so the easy option was to fly to Helsinki direct, which only took 2.5 hours. We spent a few fabulous nights in Helsinki before the additional 1-hour flight further north into Finnish Lapland.

Finnair may be Santa’s official airline, but we flew with Norwegian. They offered relatively low prices considering the season, and for a one-hour flight, a budget airline was just fine. In fact, they allowed Josh to select an exit seat at the self-serve check-in booth at Helsinki airport (which is quite rare for a budget airline). Or if you want a more rustic experience, there is an overnight train from Helsinki.

Rovaniemi airport is especially Christmassy. There was decorations all set up and upon leaving the staff were encouraging Christmas cheer by singing loudly.

How To Get Around

For the ultimate Christmas tourist destination, we found the options for making our way around Rovaniemi relatively limited.

Upon arrival, there was the airport shuttle which charged €20 for 2 adults and 2 kids to undertake the 15 minute journey to the city centre. There were taxis, which were €25 for the same journey. There was a local bus, but it ran at the strangest times and in some unusual places, so don’t rely on that to get out of the airport. 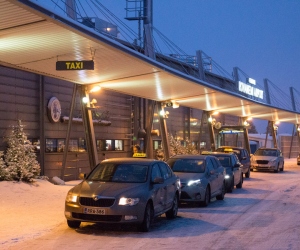 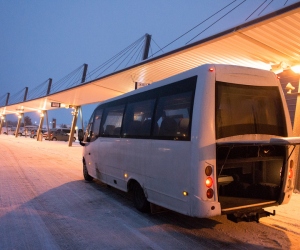 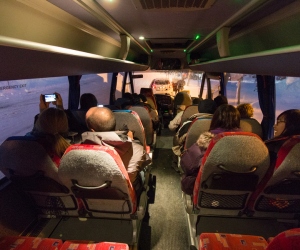 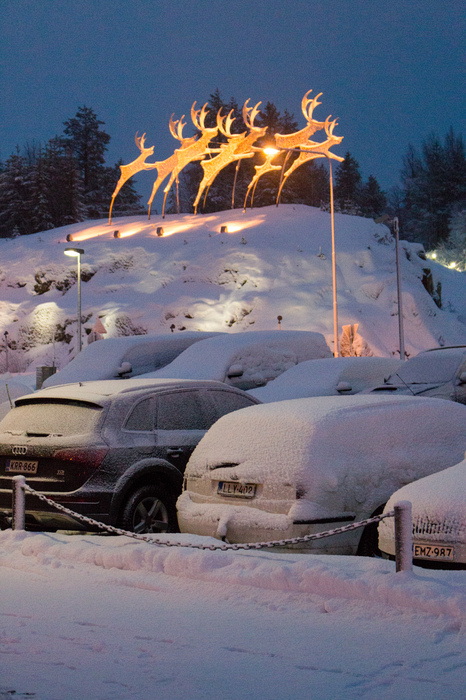 Once we were in the city our choices were limited to taxi or bus. Because of the relatively inconsistent bus schedule, we grabbed a copy of the timetable from our hotel and tried to plan our activities around it. It runs every hour to two-hourly with variations on particular days and seasons. And for some bizarre reason not every loop will stop at all the stops – only some.

A one-way ride from Santa Park to Rovaniemi city centre was €3.90 per adult, €2 per child, Caius (under 5 yrs) was free.

If you miss the bus or it’s just not running then the only other option is a taxi. From city centre to attractions such as Santa’s Holiday Village and Santa Park, a one-way journey cost between €20–25.

We stayed at the Santa Claus Hotel in the city centre. The exciting name was a beacon for the ultimate family Christmas. Unfortunately the hotel was luxury-priced with mid-range facilities. 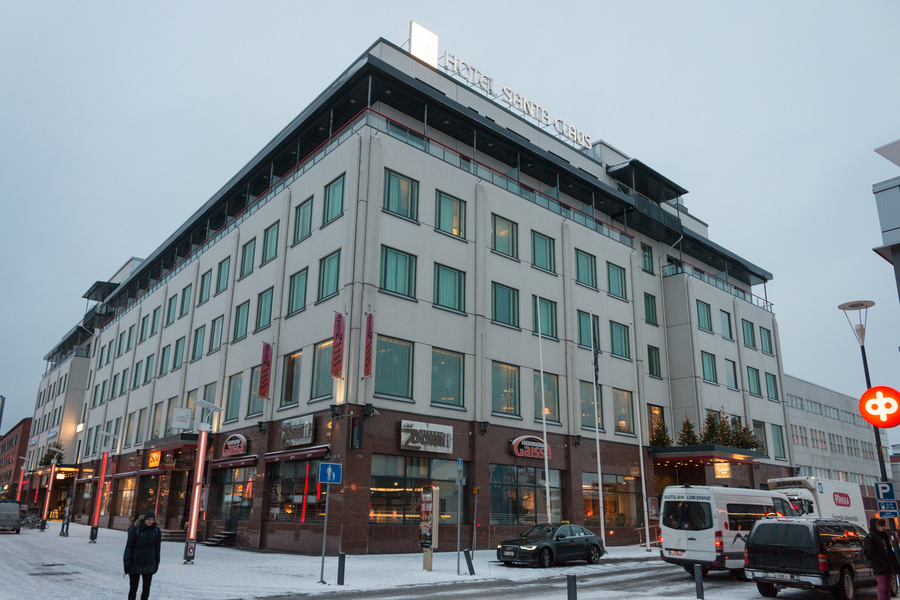 While dressed in anticipated Christmas finery in the lobby, the rooms lacked the same festive spirit. And a room for a family consisted of 2 double beds in one room. Certainly not shabby, it was very comfortable, but not as luxurious as I expected, considering the price.  There were no included bathroom products other than the budget-style combo shampoo/shower gel on the wall. And the Wi-Fi speed was lacklustre, which in the end is fine if you are coming to Rovaniemi to spend Christmas with your family, and not to work. 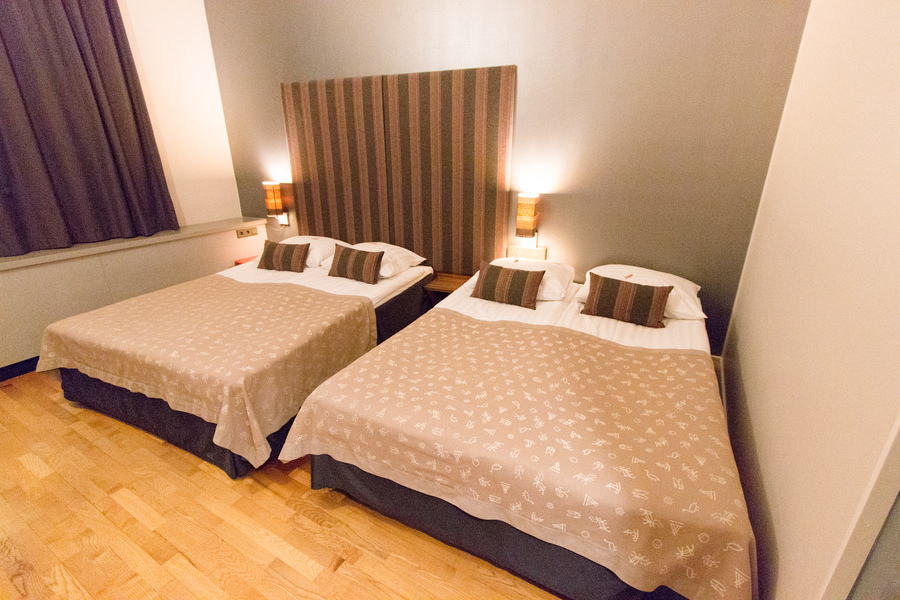 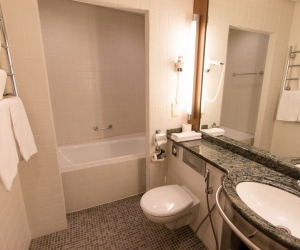 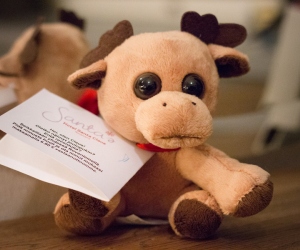 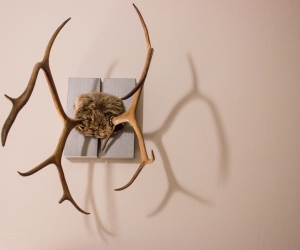 The location, however, was perfect. We were just steps away from restaurants, shopping centres, the museums and Lapland Safaris, which was where the majority of our excursions originated. It would be a bonus if the hotel could provide a shuttle to Santa's Village, something we wrote on the feedback form.

Near the front door, the hotel provided free sleds for children to borrow which was a lovely touch. 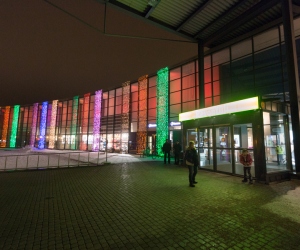 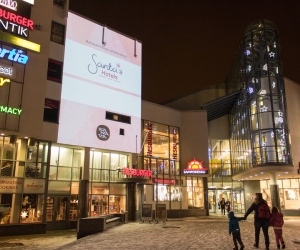 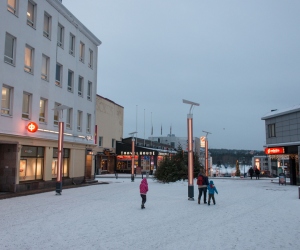 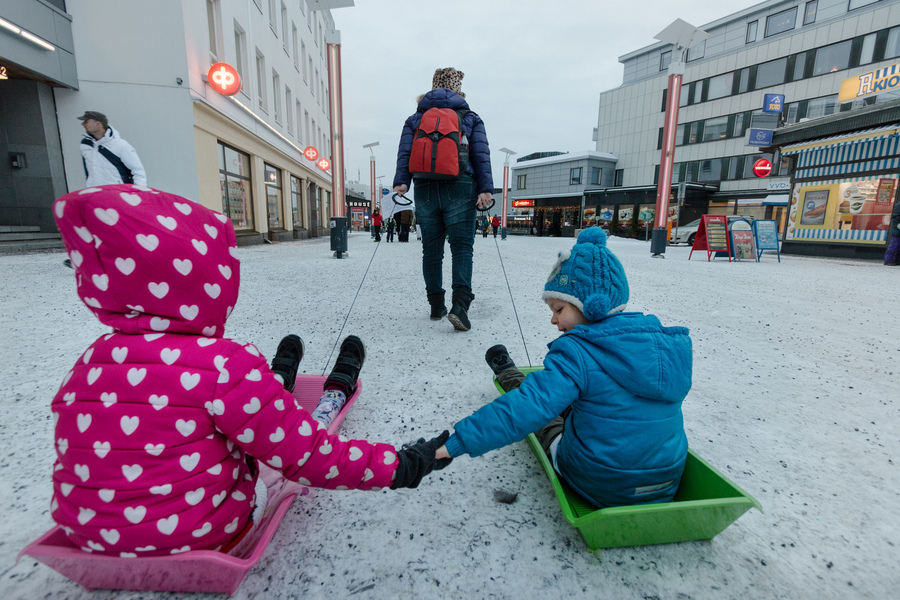 The restaurant where breakfast was located each morning was spacious and adorned with all the Christmas trimmings. But most of the time there was only 1 or 2 staff and each morning we had trouble locating a table - not because the restaurant was full, but because many vacant tables were uncleared and required cleaning. 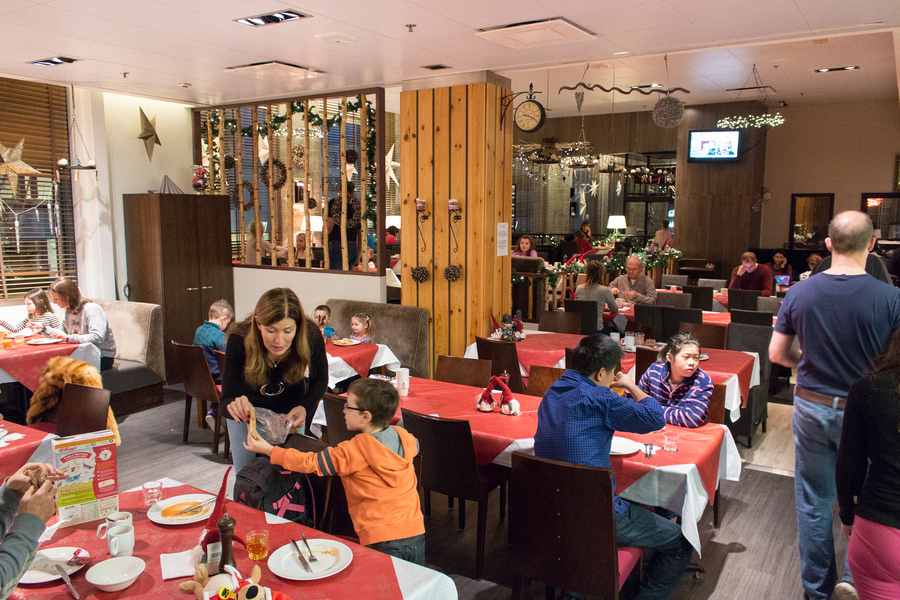 The breakfast options were your standard buffet items - scrambled eggs, bacon, beans, yoghurt, cereals and pastries. They had 2 household waffle machines that were running overtime. They took at least 5 minutes to cook one waffle and were not designed for the demands of a busy seasonal hotel. The commercial waffle irons you can find in any Days Inn in the United States would have worked a treat here, or even better, they could have had someone preparing them in the kitchen. 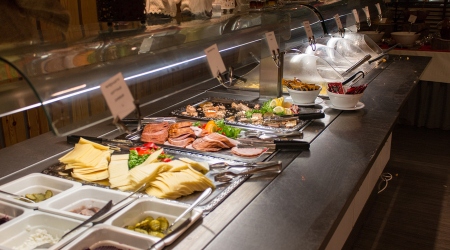 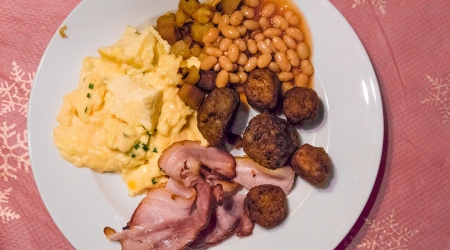 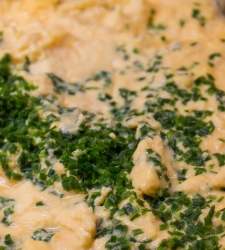 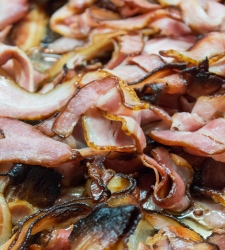 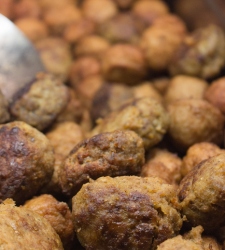 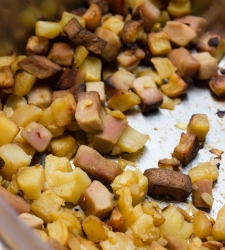 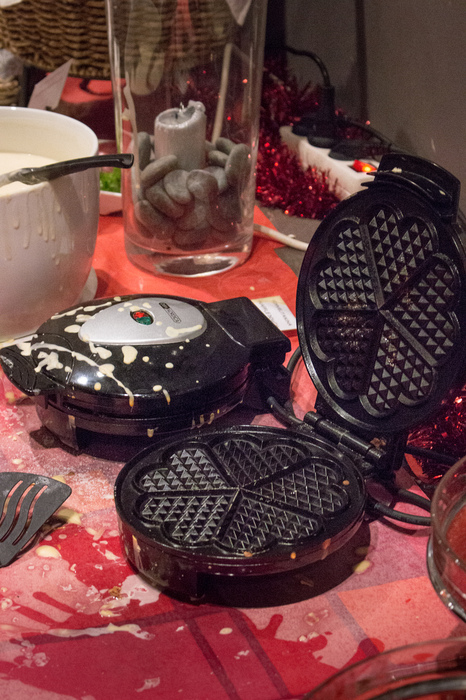 In saying that, the staff that were available were super friendly. I asked for lemon and they were happy to cut up a whole lemon for my hot water and waffles.

The smiling staff at the front reception were equally friendly and cheerful.

Off the side of the lobby was a spacious storage room for luggage, so when we checked out on our final day (which was a convenient 11am) we were able to store our bags before heading out for another day of adventure.

Everything in Rovaniemi is about Christmas, and there’s a wide array of activities available ranging from relaxing to exhilarating. In just 3 days there we managed to squeeze in: a husky sledding ride, a reindeer sleigh ride, elf school (with cookie decorating), meeting the real Santa Clause at Santa Claus Village, ice slides, Santa Park, and snowmobiling on a Northern Lights tour.

We wrote more details on our experiences with each activity, just follow the above links. 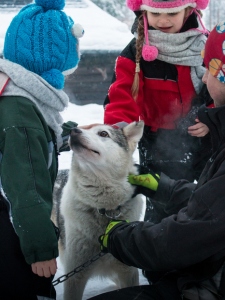 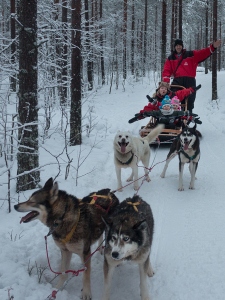 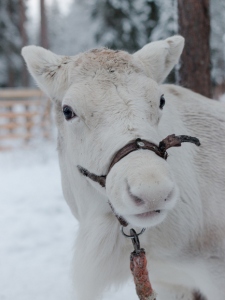 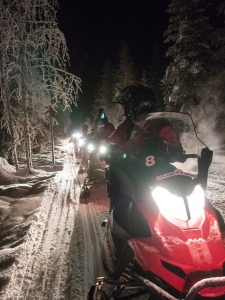 By international standards Finland across-the-board is a fairly pricey country, but Rovaniemi is especially expensive. The city is entirely tourist-centric and everything is orientated to make a buck as opposed to the liveability of Helsinki and the rest of Finland. The family friendliness, immersive culture and classic beauty of Helsinki simply outweighed Rovaniemi in spades. 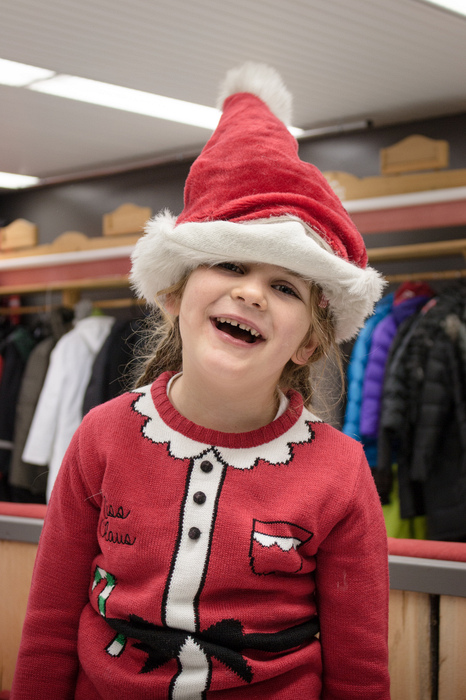 However there was something magical, almost tangible, in the air in Rovaniemi. The unbeatable experiences left us breathless. It may feel like it costs the earth to be there and do them, but in the end it was those experiences that vastly surpassed lightening of the wallet. And there is nowhere else in the world that can compare to the real-ness of Christmas in the official hometown of Santa Claus.

Especially for wide-eyed children, or the young at heart.

"I respond to every comment by private email. So please leave me comments, I love chatting to you" - Josh Bender
Posted by Franca on Dec 29th, 2014
It looks like the perfect Christmas destinations for kids. I would have personally skipped the husky and reindeer sledding ride, but enjoyed the rest of the activities that didn't involved animals :)
Great photos!
Posted by Vanessa on Jan 4th, 2015
I agree, kids will definitely enjoy the activities here. Wherever Santa is involved, kids will surely come jumping up and down. Informative and helpful post. Love it!
Posted by Bonny on Apr 10th, 2015
Wow, this looks like a magical Christmas for kids, love the idea of a reindeer sleigh ride! Maybe this year you could spend Christmas around Bavaria and Austria, another part of the world that feels extra-Chrstimassy. I spent December there with Christmas in the Austrian Alps a few years ago and wished I was 8 years old again!