And two very innocent children are instant friends, hold hands and run off to play. How sweet it is to be three. How easy to make friends, to have a sweet spirit, to want to just hold hands with another human being. 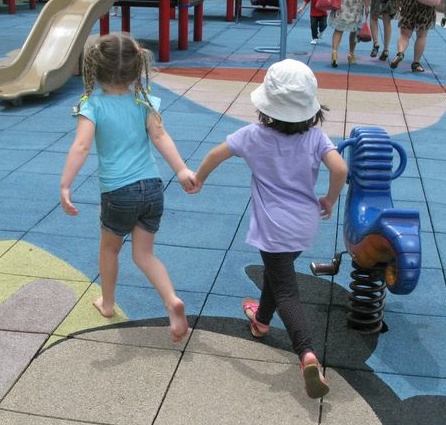 Daytime at The Peak with Friends

Part of our Big Bus Tour included a ticket on the Tram to The Peak. The ticket is valid for one month after your tour so it does not have to be done on the same day, thank goodness, that would have been hectic!

Sunday we had made plans to meet a client at The Peak. We have been working with the lovely Nicole for a number of years and never met her, mostly due to the fact that she was in Hong Kong and we were in Australia. So we were very excited to finally meet this special lady.

We had a quick taxi ride to the Tram stop at the Peak, arriving just after ten. The Big Bus boys were already there so we handed our receipt over, grabbed our ticket and bypassed the already massive queue forming for the historic ride up to The Peak.

A lovely lady let us hop in front of her onto the Tram; thank goodness cause once we sat down it was like Grade 1 being let out to recess. Those Asian people were manic as they jumped on board looking for seats and racing down the aisles.

The Tram ride up is pleasant enough. It’s a steep ride and you are literally pushed back against your chair. The views are beautiful and the green scenery lush.

At the top we met Nicole, her husband and 4-year-old boy at Starbucks. We sat down for a quick coffee before taking the kid’s to The Peak Playground. It was a great little spot. Clean, plastic playground with scenic views and little gardened walls to perch yourselves to watch the kids and chat to new friends.

The morning went quickly and soon we said goodbye to our new friends and headed to lunch. Josh wanted to take some panoramic shots so he paid the $5 and went up to the observatory deck with Caius. Mia and I headed to Bubba Gump.

We did a quick walk down one of the paths, but we knew the kids limits and it was time to depart. Thankfully for a Sunday afternoon the Tram ride back was not to busy. There was not much queue and soon we were back down the mountain and headed home for an afternoon nap.

After everyone was awake and happy we decided to go out to dinner. Upon checking Trip Advisor we decided to find Yung Kee, famous for it’s roasted meats. A quick $1 tram ride and a little walk we found Yung Kee on a road all lit up with the famous Hong Kong signs. 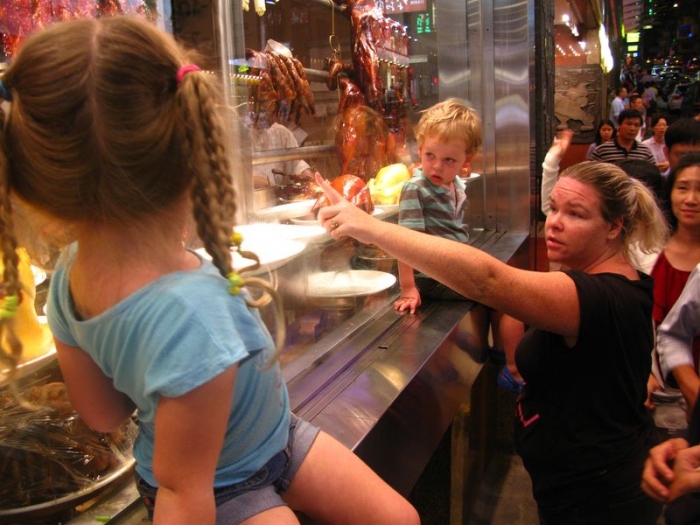 Thank goodness we arrived early, because the restaurant filled up quickly and, as it was we were escorted into an elevator and taken to the 3rd floor. Finally friendly Hong Kong people and customer service! The floor manager was absolutely delightful. He escorted us to our seats, asked us if we needed help just to call him. He described a few dishes for us and then helped us pick out some vegetables, rice and a roasted meat platter of barbeque pork, roast duck and suckling pig.

The kid’s grew slightly bored and we soon had to revert to iPhone’s for some peace and quiet. Then Josh and I had a chance to talk and check out the restaurant. Some of the stuff coming out of the kitchen was amazing like a soup served in watermelon!

Our food was absolutely delicious. The meat was all soft and full of flavor. And we had more than enough food that we never made it to dessert.

The extravagant meal set us back $95. Certainly more than we were used to, but such a beautiful restaurant, delicious food & a Michelin star! Not many Michelin star restaurants get you that much food for that small a price.

Visit all our FOOD photos on our Food Photo Journal!!

We had heard numerous times that The Peak is so amazing in the night, as it is in the day. We had no time to make this discovery, however on our last day in Hong Kong we decided to skip Ocean Park and do just that.

We had been going non-stop and the kid’s temperatures were still in the 39C. So after much inner struggle we decided they needed to stay home, nap and get well.

Our last morning in Hong Kong we spent lounging on the couch watching TV, working and the kid’s had a good 3 hour nap.

Late afternoon we decided to at least do one thing on our last night and we caught the Tram to Hong Kong Park.

It was a long walk through the park to the Children’s Playground that the kid’s found exhausting, but really was actually quite beautiful with lots of waterfalls, turtles and flowers. 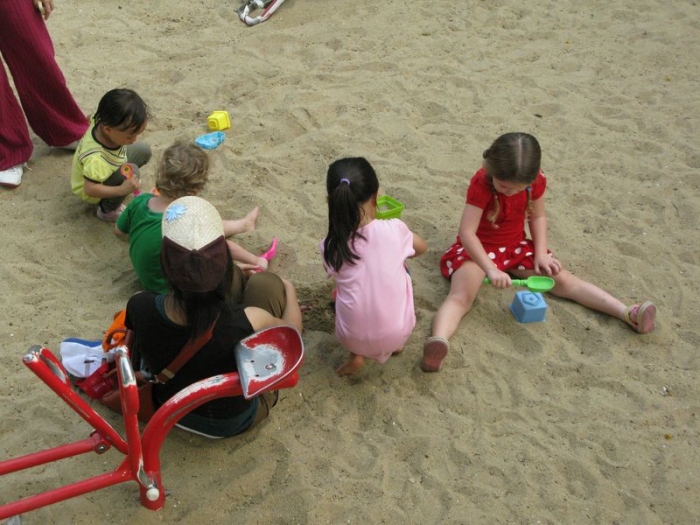 Finally we reached a multi-level playground that the kid’s were very excited about. Honestly, kids are amazing. The temperature said 33C “but feels like 42” cause of the humidity. It was sticking hot. I sat there completely drenched in sweat watching the kid’s play in the sand.

I loved a little sign in this park letting parents know that the park is disinfected 4 times a day! I've never even heard of that happening anywhere else and never thought about it until I read it. What a great idea!

Josh and I sat on a bench slowly melting and establishing dinner plans. There was a top voted restaurant nearby that we decided to visit.

We gathered the kid’s up, grabbed a drink and walked to this place. I can’t even remember what it was called, but it was very nice. Only problem was it was 5:30pm and dinner didn’t start until 7:30pm. Ok so plan two – hey! What about The Peak? We were actually at the base of the Peak and decided to jump in a cab and take that to the top instead of the over crowded Tram, thank God.

An Evening at The Peak

The scenery via taxi is just as beautiful if not more so than the crowded tram. It is also cheaper for 4 people.

Once we reached the Peak we decided on Café Deco in the Galleria. Surprisingly this restaurant had an indoor play area for the kids and we were seated right in front of it. I love a restaurant like that! The kid’s played, we enjoyed the views and the darkening sky over Hong Kong resulting in a tantalizing display of twinkling lights.

The kitchen is open style so you can see everything the chef’s are cooking and the meal was delicious!

Earlier in this blog we mentioned the $5 fee to go to the Observation Deck in the building above the Tram. However on the top floor of the Galleria is a free observation deck with just as great views.

We took some great photos, attempted to watch the Light and Sound show, but with sleepy children and the starting rain bailed and made our way to the basement for a taxi ride home. And seeing the queue for the Tram I was pretty stoked to be taking a $7 Taxi.

Visit all our FOOD photos on our Food Photo Journal!!

The next morning we were up early for our trip to the airport. We decided not to risk the “no” taxis and had ordered one by phone. He took us straight to the Airport Express and we were on the train back to the Airport. Air Asia check in at Terminal 2, but board at Terminal 1 so we were glad we arrived two hour’s before. For once we had time to walk calmly though the giant airport and even stopped for breakfast at Deli France.

Our final moment in Hong Kong was walking towards the boarding gate and hubby decided to go to the toilet. I had staff telling me to call him and get him there pronto cause the gate was closing.

I left the kids with the staff raced to the men’s and yelled inside “The plane is leaving, get out here now.” It was a funny sight seeing my 6 foot 8 husband running towards the plane as we hurried through the gate.

A full flight and for once we were given 5 seats instead of 6 – how rude! Haha. Josh ended up sitting next to a very curious Indian man and had a great conversation with him while Caius slept all the way to Bangkok.

Mia also fell asleep the majority of the way too. Starting to love flying, when this happens, and I get those small hours to blog, watch movies, or read.

"I respond to every comment by private email. So please leave me comments, I love chatting to you" - Josh Bender
Posted by Jess Pilton on Sep 4th, 2012
Loved today's blog post! Your adventures inspire me to go out & do more, Im always telling Matt what you guys are up too. We're planning to do around Australia when our youngest is 2 or 3 now :)
Interesting about the parks bring disinfected 4 times per day. Are they privately owned? That would be nice here! Lol!
Miss your face but glad your having the time of your life!