Resort Holiday In Sunny Beach For Just $99.50 Per Day

We never choose Sunny Beach for it’s rich culture. Nor did we choose it for its food.

Instead we chose it as a resting place. A place to work and write and just relax.

We chose it for all those reasons, but most of all we choose it because it was cheap.

Sunny Beach is a resort located on the Black Sea in Bulgaria. It’s filled with hotels, restaurants and entertainment. It’s also filled with Russians and Brits. English is widely spoken and nearly every restaurant offers a Sunday Roast.

So how much did our month in Sunny Beach cost? 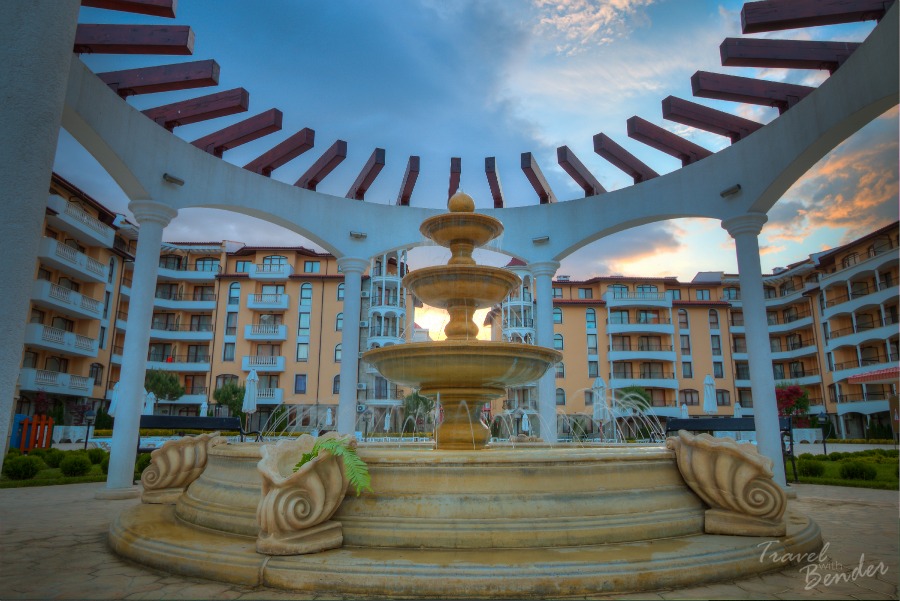 We rented a 2 bedroom, 2 bathroom apartment at Royal Sun resort complex. There were 3 swimming pools, 2 playgrounds, a restaurant and a mini mart on the premise, as well as a gym if you want to work out on your holiday.

The price included linen and all utilities, except Wi-Fi. It also included housekeeping once a week.

We usually ate out once a day, sometimes more. We are not really eat-on-the-run people so while there is definitely plenty of cheap fast food options from pizza slices at 1.99 lev (€1) or kebabs at 5 lev (€2.50), we usually ate at a restaurant.

Nessebar Old Town had great food, but was more expensive. Nessebar had good food and low prices. Sunny Beach rarely had good food or good prices. We probably ate at over 30 restaurants during our time here and only found a few jewels.

The prices here are made for tourists so you will rarely find cheap entertainment. We went to two waterparks during this month, which both cost us 114 lev (€57) each time for the whole family.

This also included hiring a 4-person bicycle, kids jumping castles, a pirate cruise and other such activities.

We usually ate breakfast and lunch at home, mainly because we would be working or enjoying the pool or just to watch out fat/sugar levels ;)

There were two big supermarkets in Sunny Beach, a Lidl and Janet. The Lidl supported more of a Western feel and we could get the bus there for 2 lev (€1) or a taxi about 10 lev (€5) depending how hard you bargain.

Often we went once every week and a half and spent about AUD$60. For in-between times we would just hit the minimart outside our hotel, which was slightly more expensive. E.g. 11-litre bottle of water was 1 lev (€0.50) at Lidl and 4 lev (€2) at the mini mart.

If you wanted to save more money, then eating at home and from street vendors could get a month’s worth of food down to less than AUD$300 in total.

When we first got to Sunny Beach we were taking taxis at ridiculous prices. We soon learnt that they were price fixing by a behind-the-scenes racket and decided to use the public bus system instead. In May the buses were very rare, but come June double-length bendy-buses hit the bus stops every 15 minutes. It was 1 lev (€0.50) per adult to ride the bus up and down the main street or 2 lev (€1) to take it to the supermarket.

$38 of this budget was one taxi ride out to Khan’s Tent.

Personal is our kind of miscellaneous items. Included in this price was a jacket when I first arrived for $11 because it was really cold and then later a new bikini because I felt overdressed around the Europeans ($26). There was some medicine and other personal items as well.

This brings our total spending for one month to…

Not bad for a family of 4’s life of luxury in a resort, steps from the beach, eating out daily. Sound good to you? 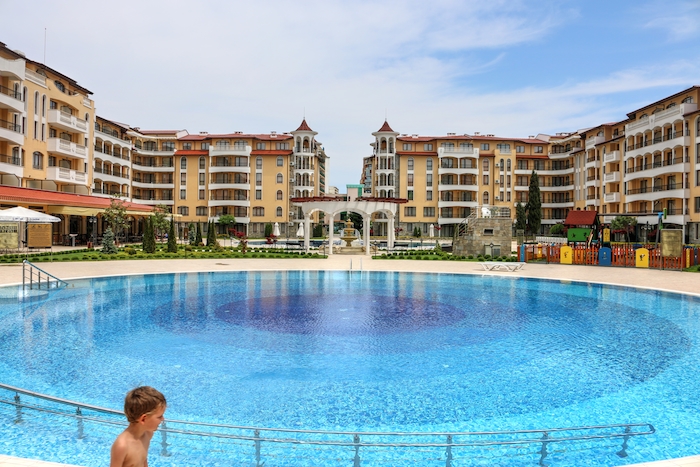 "I respond to every comment by private email. So please leave me comments, I love chatting to you" - Josh Bender
Posted by Ellen Cadzow on Jun 21st, 2014
It is great to know it is possible to travel with a family on very cheaply. Most sites and books focus on the individual traveller costs, but when you multiple that by 4 it gets madly pricey. Thanks for inspiring families to get exploring!
Posted by Greg Maddox on Feb 4th, 2015
Hi
I to went to Sunny Beach with family and agree with you- its not sophisticated but a great place to relax. I didn't breakdown our expenses but they were similar to yours. By the way, did you go to Nessbar? It is or was, a UNESCO village site near Sunny Beach(3km). I have just started a blog and still in the beginning stages of setting it up so it like Sunny Beach its unsophisticated- I just posted my first two stories on sunny beach and nessbar gregstravelpics.com. Like you I travel with family. Can you make a living blogging and traveling or do you subsidize your travel?
Posted by Franz-Erik on Apr 12th, 2017
Dear Bender. My wife and I liked Sunny Beach so much that we are returning again this summer. We stayed at the Hotel Iskar and it was magnificent. We have a child who will be 10 this year and we are not party people. Despite the drunken Englishmen at just about every pub & club, we heard nothing in our hotel room. We slept like logs. I get up at around 4 AM as is my wont and I took a stroll around the neighbourhood to witness the stragglers weaving towards their respective hotels drunk as skunks and acting like fools - but It’s no skin off of my nose. This year we booked in at the Ivana Palace which is nearing Sveti Vlas. We are looking forward to returning! Any info on the mini train so far north? I've seen a few notices that they do operate up that way but as the prices are quoted in lev, I fear the info might be out of date.
Posted by Franz-Erik on Apr 17th, 2017
Info on the mini train: GOT IT!