12 Essential Things To Do in Shaanxi, China

You might not be familiar with Shaanxi, a province in northern China, an ancient land steeped in history and legend.

As you can imagine, there is a lot to see, do and taste in Shaanxi, but before we dive in, here’s a quick backstory to fill you in…

The largest city, Chang’an (today called Xi’an), served as the unified country’s first capital in 221 B.C. Xi’an was also the strategic starting point of the Silk Road in 130 B.C., to facilitate trade between China and Europe. Xi’an has inspired significant advances in commerce, education, philosophy, poetry, and more, and was considered on equal footing with ancient Rome. For 10 dynasties it exerted influence on the surrounding regions, with the golden age being the Tang Dynasty (618-907 A.D.).

Today you can find well-preserved architecture and culture that has lasted for centuries – surviving war, earthquakes, and floods.

Any visit to China is not complete without spending at least a week or more exploring Shaanxi province. All you need is your camera, a hungry tummy and an active imagination. Let’s take a closer look at 12 unmissable things to do on your first trip to Shaanxi. 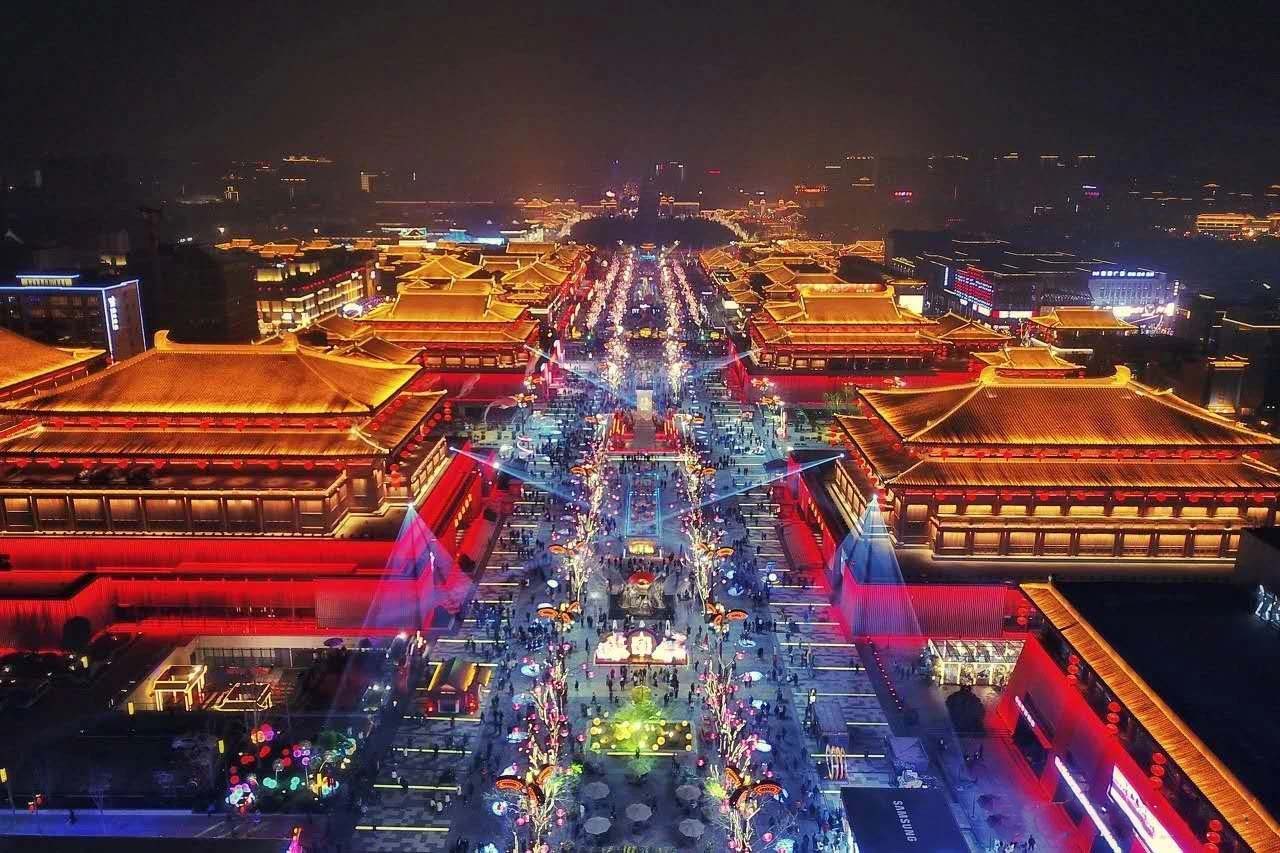 Considered to be the 8th Wonder of the World and one of the greatest archaeological discoveries of the 20th century, this series of 6,000+ life-sized Terracotta Warriors are over 2,000 years old. While digging a well in 1974, local farmers stumbled upon broken pieces of terracotta. After a year of investigation and excavation, 3 large pits were uncovered and identified as the mausoleum for Qin Shi Huang, capturing the world’s imagination and throwing new light on the history of China’s first emperor (221 - 206 B.C.). The site was recognised on the UNESCO World Heritage List in 1987.

Carved with intricate detail, warriors carry real bronze weapons, standing in formation along with horses and war chariots. 2 large bronze horse-drawn chariots were unearthed in 1980, found in 3,000 pieces. Over 8 years, cultural relic experts restored these amazing pieces of art and now they are on display for the public in a new museum. 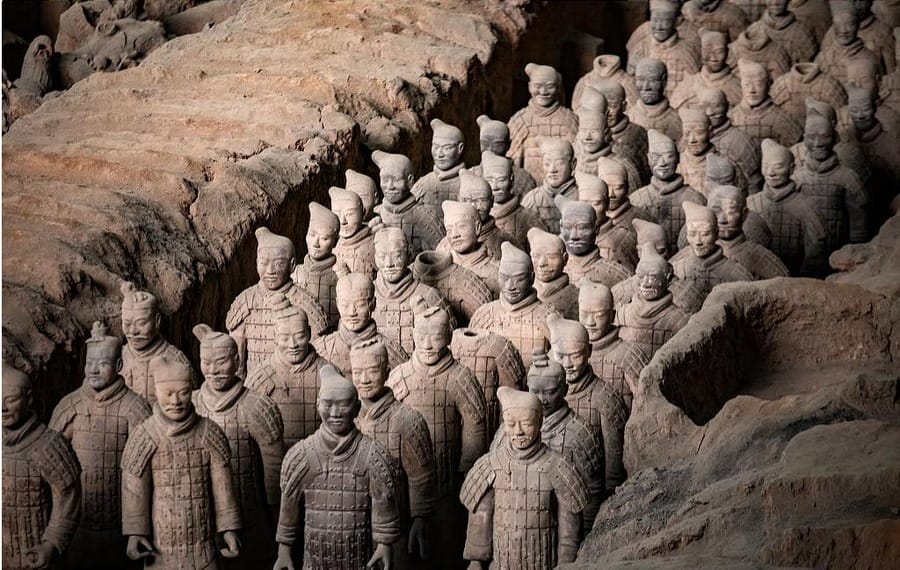 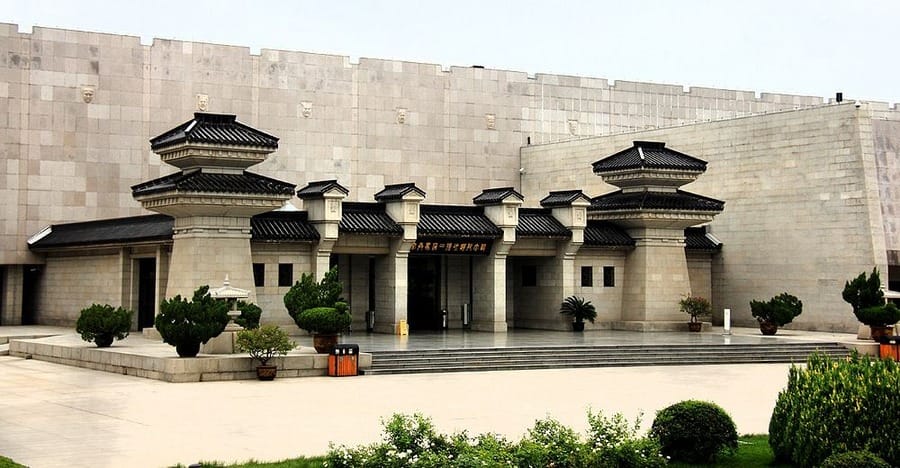 The Terracotta Warriors are definitely the most widely recognised icon in Xi’an and the most popular thing to do in Shaanxi, but there’s a lot more to the city and province. Let’s keep looking.

Located 30km east of Xi’an, near the Terracotta Warriors museum, this profoundly historic spot set against the backdrop of towering Lishan Mountain, is the site of several palaces and geothermal heated hot springs. With a documented history of almost 3,000 years, this now-protected site was used by the emperors of the Zhou, Qin, Han, Sui, and Tang dynasties.

Huaqing Palace saw the downfall of King You, the last of the Western Zhou Dynasty in 771 B.C. in a story that parallels the ancient Greek fable “The Boy Who Cried Wolf”. In 1936, it was also the site of the political crisis known as the “Xi'an Incident”, when 2 generals detained the country’s leader in an attempt to end a civil war.

The sprawling palace complex covers 85,560 square metres and includes a series of museums, halls, towers, bridges, temples, gardens and landmark buildings which pull back the curtain on the complex history of this location. 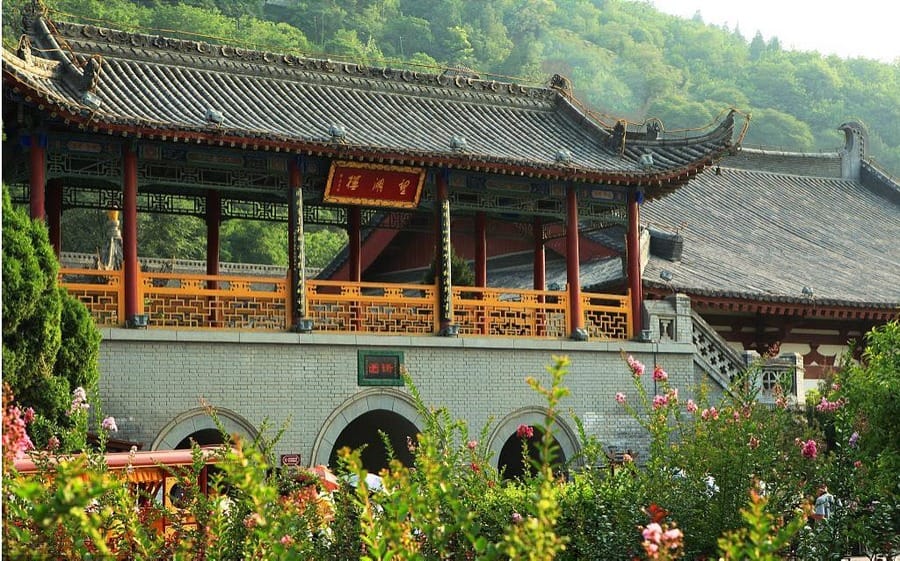 To bring one of the historical events to life, a nightly large-scale live performance called “The Song of Everlasting Sorrow” recounts the powerful love story between Emperor Xuanzong and his favourite concubine, Lady Yang. The 70-minute landmark show is presented on Nine Dragons Lake, using cutting-edge sound and lighting technology. 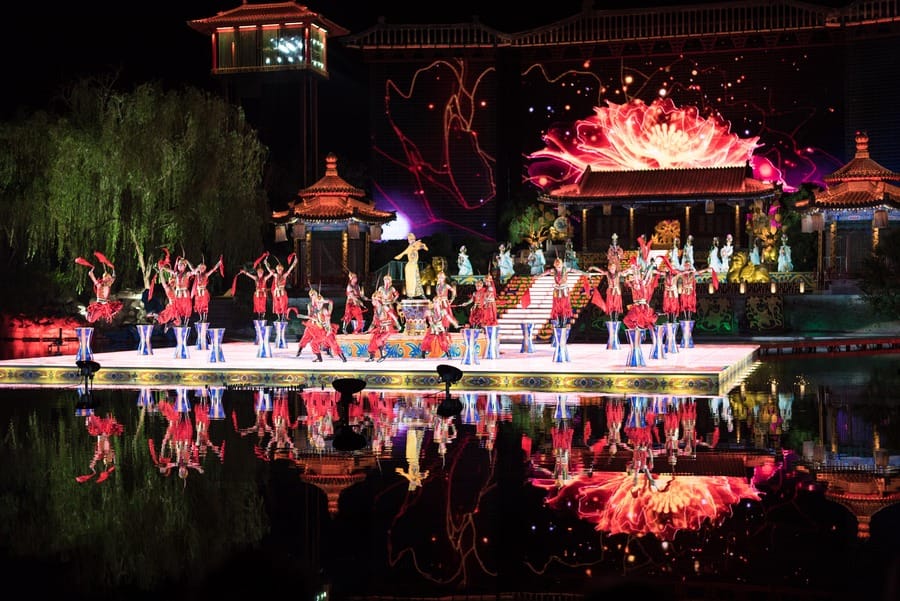 Situated within Daci'en Temple, this structure was built in 652 A.D. for the famous Buddhist monk, Xuanzang, to translate Sanskrit scriptures obtained from India. At 27 years old, he embarked on a 17-year journey along the Silk Road, crossing through 100 countries, to explore India and eventually return back with 657 sacred texts on a caravan of 20 packhorses. These provided fundamental contributions to Chinese Buddhism.

Remarkably, the storeyed pagoda is constructed with layers of brick, yet without any cement. Over the centuries the structure has been repaired and renovated, surviving war and earthquakes. Now visitors can see and climb this architectural marvel. 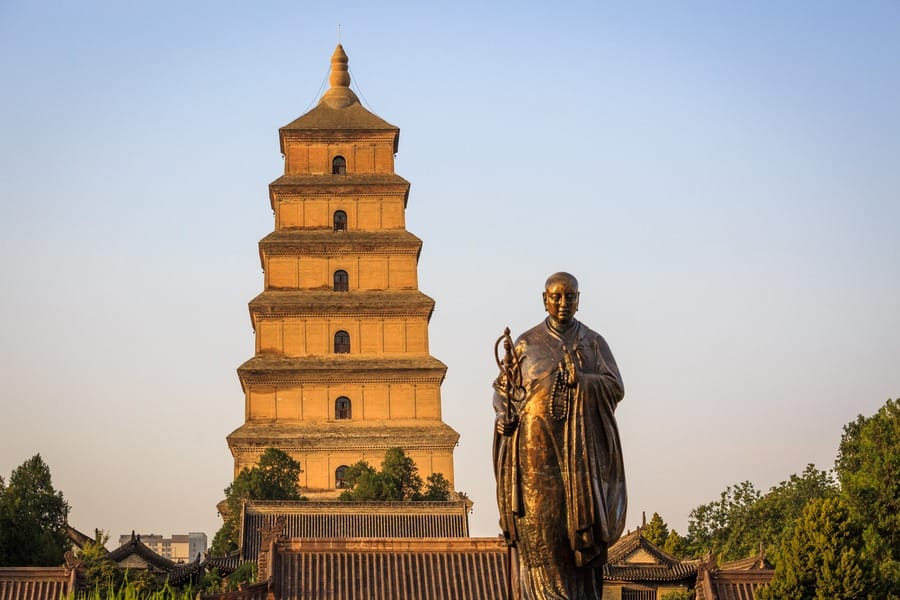 Situated in the North Square of the Giant Wild Goose Pagoda, the largest musical fountain in Asia entertains visitors every evening for free. Using high-tech lighting and audio systems, the fountain’s water streams are synchronised to create a magical experience.

Built in 707 A.D. this structure is located within Jianfu Temple, and was previously called “Jianfu Temple Pagoda”. Its purpose was to store Buddhist sutras that monk Yi Jing brought from India.

Along with its predecessor, the Giant Wild Goose Pagoda, these are the most important Buddhist pagodas constructed in the Tang Dynasty, and serve as the icon for Xi’an.

An earthquake in 1556 A.D. damaged the pagoda and the upper 2 tiers toppled off, leaving just 13 of the original 15 intact. It’s still remarkably well-preserved inside and visitors can climb a narrow wooden stairway to the top – although the ascent is not recommended for those in poor physical condition or children. 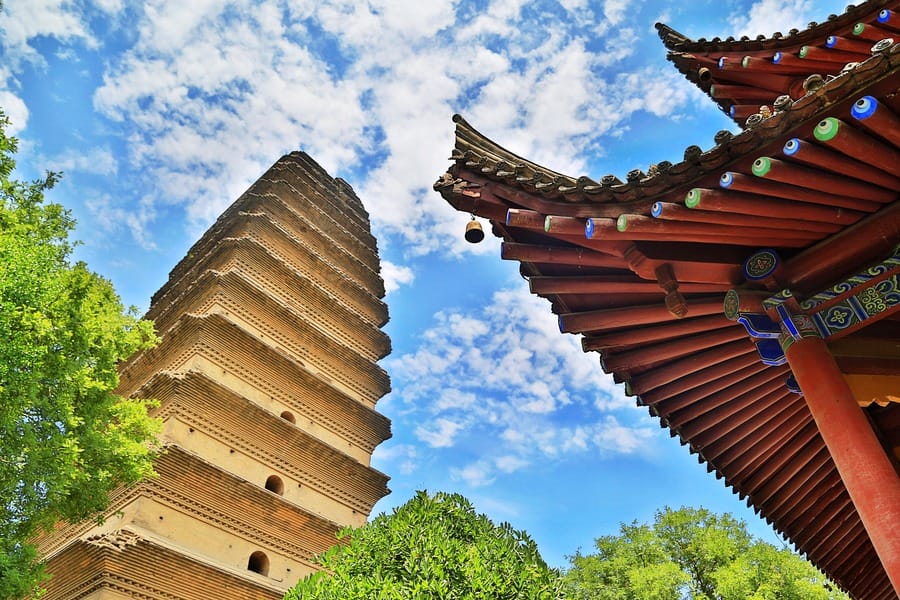 Located within the Jianfu Temple, the museum’s collection includes 130,000 artifacts displayed over 5,000 square metres. Opened in 2007, the museum is famed for a large number of precious relics and landmark architecture incorporating manicured urban gardens.

Visitors explore the history of Xi’an and Shaanxi, its economy, social life, culture and trade, through paintings, precious artifacts made of gold and jade, imperial seals, calligraphies, statues and more. 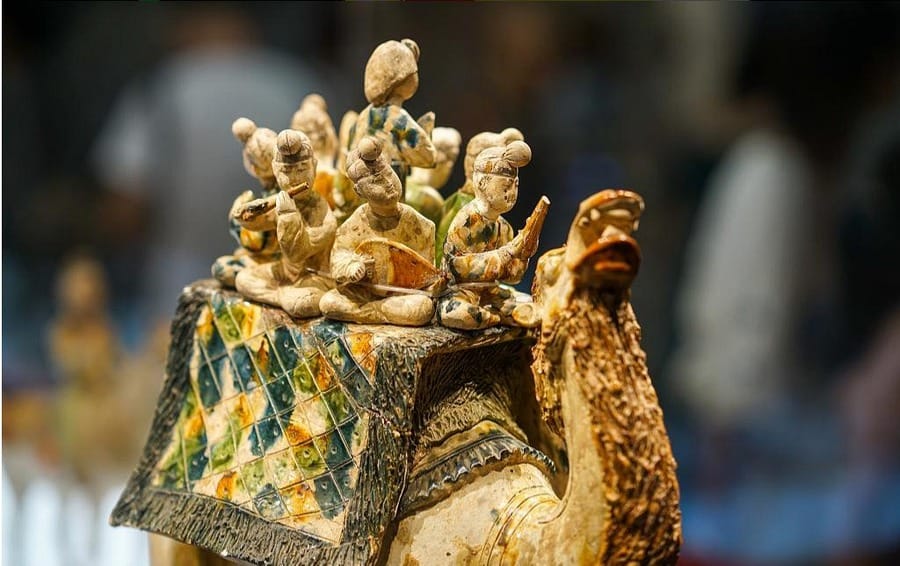 Xi’an’s city walls are one of the oldest and best preserved in China. Construction started in 1370 A.D. during the Ming Dynasty and became one of the largest ancient military defence systems in the world

The walls can be explored day or night on foot, by bicycle or an electric sightseeing car. The recommended walking route takes around 4 hours to complete. Visitors are rewarded with beautiful views of the Bell Tower, Drum Tower and ancient city centre. 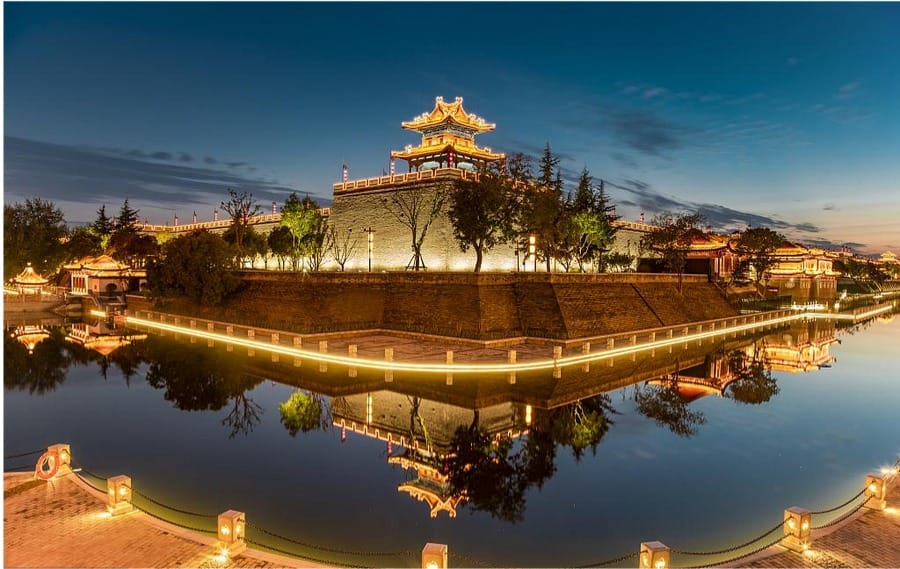 Exploring the city wall would not be complete without the unmissable night-time performance called “Chang’an Impression - Tang Dynasty Grand Welcome Ceremony”. Set in the South Gate Cultural Etiquette Square, the theme of the 60-minute dance show is etiquette from the Tang Dynasty. 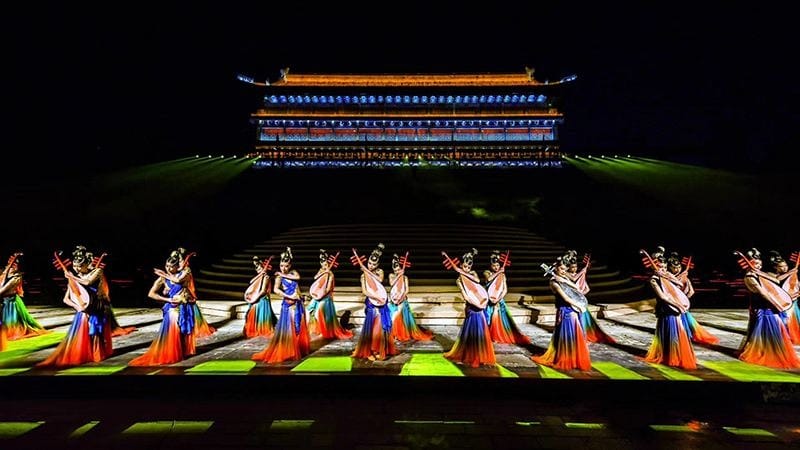 As the only yellow waterfall in the world, this site frequently appears in Lonely Planet and National Geographic. Located 350km northeast of Xi’an, the fast-flowing Yellow River snakes through the narrow Jinxia Grand Canyon ending in a 15-metre-high thunderous waterfall that resembles a teapot spout (“hukou” in Chinese). The width of the turbulent falls is typically around 30 metres but extends up to 50 metres during flood season.

The best time to visit this natural attraction is April - May and September - November. During winter the waterfall transforms into silvery ice. 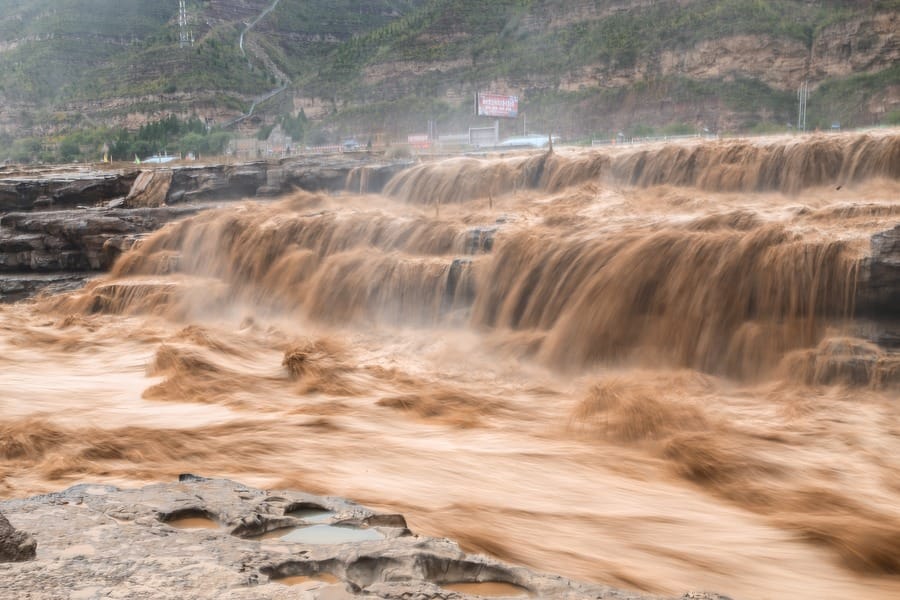 Get ready for an adrenaline rush! Hua Shan Mountain, conveniently located about 120km east of Xi’an, is considered one of the “Five Great Mountains of China”… and the most dangerous hike in the world.

The main attraction is an optional 3-part 100-metre Plank Walk perched above a seemingly bottomless ravine. Protruding from the side of the mountain, the 700-year-old walkway is built with wooden rafters and iron chains… and no guard rail. Climbers, secured with a safety harness, must cling to the vertical rock face and take one slow breathtaking step at a time, including navigating a portion that is only 0.3 metres wide!

Each of the mountain’s 5 peaks offers something different, with the best sunrise view at East Peak (2,100m).

Taoists believe the god of the underworld lives inside the mountain. Multiple temples and shrines, some originating from the 2nd century B.C. are dotted around the landscape. For centuries, the sacred location was only visited by local pilgrims, emperors, and those seeking powerful Chinese herbs believed to offer immortality. More recently, local tourists started visiting in the 1980s and the first cable car opened in the 1990s, allowing visitor numbers to the North Peak to surge. In 2013 a second cable car to the West Peak opened.