I've only ever heard vaguely of Saint Tropez, but I certainly enjoy fine dining and now I am wishing for an escape to France. Since we are heading there in the next months I might add this to the travel wish list.

There is nothing that I enjoy more than having a meal in a glamorous restaurant, and if - like me - you love combining your passion for great food with a holiday overseas I recommend you take a break to Saint-Tropez. As well as being regarded as one of the most chic places on the Mediterranean coast, the French town is home to a number of Michelin-starred restaurants.

Even if you're considering looking for a villa that enables you to go on a self-catering holiday to France so that you can prepare your own meals, I still think it's worth treating yourself to a night out at one of the local luxury restaurants, even if it is only the once. After all, France is widely considered to be the world leader for fine dining and budding chefs regularly come to the country to develop their skills, so it would be a pity if you didn't treat yourself to having food prepared for you by expert cooks. To get a real flavour of Saint-Tropez's gastronomic heritage, you might want to head to one of the following eateries. 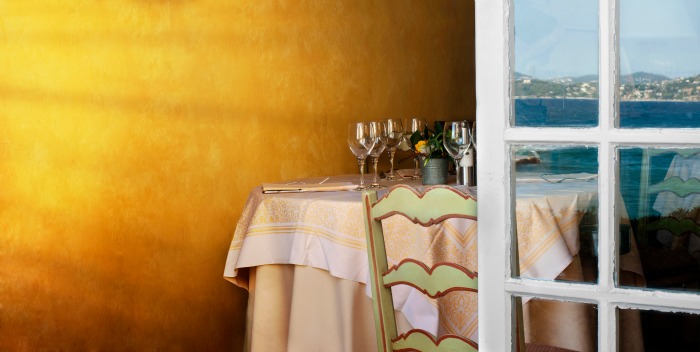 Situated in the five-star Residence da la Pinede hotel, La Vague d'Or is the perfect place for discerning foodies to go. In fact, it has got three Michelin stars (the highest rating that the scheme offers) so you'll struggle to find an establishment that is more elegant or serves finer fare!

As is the case with many high-class restaurants in the area, the eatery adapts its main dishes on a regular basis in order to reflect changes in the availability of seasonal produce.

While this means the dishes offered in early spring are likely to be quite different to those on offer in autumn, I don't think you'll struggle to pick something tasty from the menu. I particularly like the look of La Vague d'Or's appetisers, which include nicoise salad, accompanied by a flavoured tuna dressing and Grenache vinegar, and imperial smoked salmon with lemon, cream and pancakes.

Obviously, dining out a three-star Michelin restaurant doesn't come cheap. To give you an idea of how much it costs to eat here, starters are priced from around €50 (£42), with main dishes and desserts beginning from €60 and €23 respectively.

Another Michelin-starred restaurant worth visiting in Saint-Tropez is Le Belrose. Although this only has one star in comparison to La Vague d'Or's three, I don't think you'll find that will diminish from the quality of food that you try.

Located in the luxury Villa Belrose hotel, this eatery is headed by Thierry Thiercelin and strives to offer the best of traditional Mediterranean cuisine but with an added modern twist.

Iberian sucking pig and sea bass served with purple artichoke and seaweed butter are just a couple of the fantastic main courses on offer, with prices starting from around €45.

You won't be short of great wines to choose from at Le Belrose either. While the restaurant's wine list consists entirely of French vintages, the fact that this menu spans more than 30 pages means there will be more than enough scope to find something that will complement your food perfectly.

We've only looked at a few of Saint-Tropez's most fantastic restaurants, but if you know of any others please let us know by posting a comment below.

As a copywriter, Ashley King has been writing on a vast range of subjects, including travel, business and finance, for a number of years. Currently he is travelling around New Zealand as part of his next adventure.