I must admit we struggled in Manila, but if I had known about these foods I would of got Josh to eat a whole lot of them!

Manila is a place split between worlds, with contradictions and wonders at every corner. You’ll hardly need direction, if you end up wandering the umbrella-speckled streets of the “pearl of the Orient,” to find a delicious place to eat some regular Filipino fare. But if you’re looking to put together a game plan that will leave time for you to see all of the things to do in Manila, check out our list of the weirdest foods you can grab on the street in this bustling, modern metropolis.

Plenty of Filippino food is a fusion of traditional fare of the archipelago combined with colonial Spanish influences, but not this dish. Balut, a boiled fertilized egg, is a wholly Asian creation and also appears in other cuisines in the continent’s southeast. After years of being considered food for the lower classes, the popularity of balut has recently spiked in the Philippines making it a staple of haute cuisine in the country.

The fertilized egg is incubated for a few weeks before being boiled, meaning that the embryo inside—usually a duck—is partially developed by the time it is served in its own shell and broth. Occasionally balut is also shelled and fried or cooked in adobo. If you’re brave enough to try the dish, Manila is undoubtedly the place to do it: the area’s duck-raising municipality of Pateros is renowned for its production of the fertilized eggs, making the food a must-have for intrepid eaters. 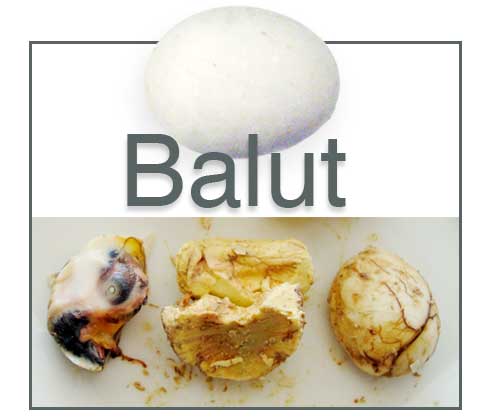 You might be thinking that eating something that hasn’t been born is macabre, so here’s an alternative: marinated day-old chicks batter-fried or skewered in pairs and barbecued over a flame. Though not all tourists can brave it, the whole chick’s body is meant to be consumed—head, feet and all. Don’t feel too bad for the young chicks—they had a dim future doomed from the start. As males they were destined to be culled by poultry farms (again, the ones based out of Pateros), which understandably keep only egg-laying females alive. Instead of being wasted, the day-old male chicks are made into a crisp and slightly gamey snack for city dwellers.

Even if you’re not brave enough for either balut or one-day-old chick, there’s an option at the egg stand for those of you who want more than to just eat the food at the hotels in Manila. Penoy is traditionally a duck egg but these days, for cost and availability reasons, it occasionally comes from a chicken.

The egg is incubated but unfertilised, meaning that while it doesn’t have a foetal duck inside like balut does it’s still not your regular breakfast egg. Instead, penoy is sort of like a scrambled egg in a shell, and the amount of time the egg is incubated changes its texture when it’s served. Incubated for fewer than twelve days it is considered runny, or masabaw, and after more than twelve days it becomes dry, or tuyo, which is similar in consistency to a hard-boiled egg. Penoy eggs are marked with lines at carts to distinguish them from balut eggs: a vertical line for soupy penoy and a horizontal line for hard ones.

Yes, this food is actually called betamax and yes, it’s named after the archaic video player (there are also Filipino snacks called “adidas” and “walkman,” so while it makes little sense to foreigners to see these brands associated with foods, this is not the only one). The dish is made of pig or chicken blood that is scalded to cause coagulation before being formed into rectangles (usually the size and shape of a betamax tape, hence the name), skewered and grilled. Because eating the snack is more about enjoying its livery texture than any inherent taste, it’s usually served alongside a vinegar and chili sauce for dipping.

Since you know you’re curious: adidas is chicken feet that are boiled, marinated and then grilled and walkman is, you guessed it, chopped up and barbecued pig ears. (You certainly can’t say that Filipinos don’t have a sense of humour.) They’re usually sold at street carts alongside chicken necks and heads, all marinated in the same mix of soy sauce, banana ketchup, lemon juice and brown sugar before being grilled.

Another frequent guest on the menu at Manilan food carts, isaw is made from either chicken or pig intestines that are thoroughly cleaned inside and out several times before being boiled and then grilled and served with a vinegar-based dipping sauce. When charred to a crisp the dish is said to resemble a piece of maple-glazed bacon.

Frying isaw is also starting to become quite popular, so be on the lookout for that option. 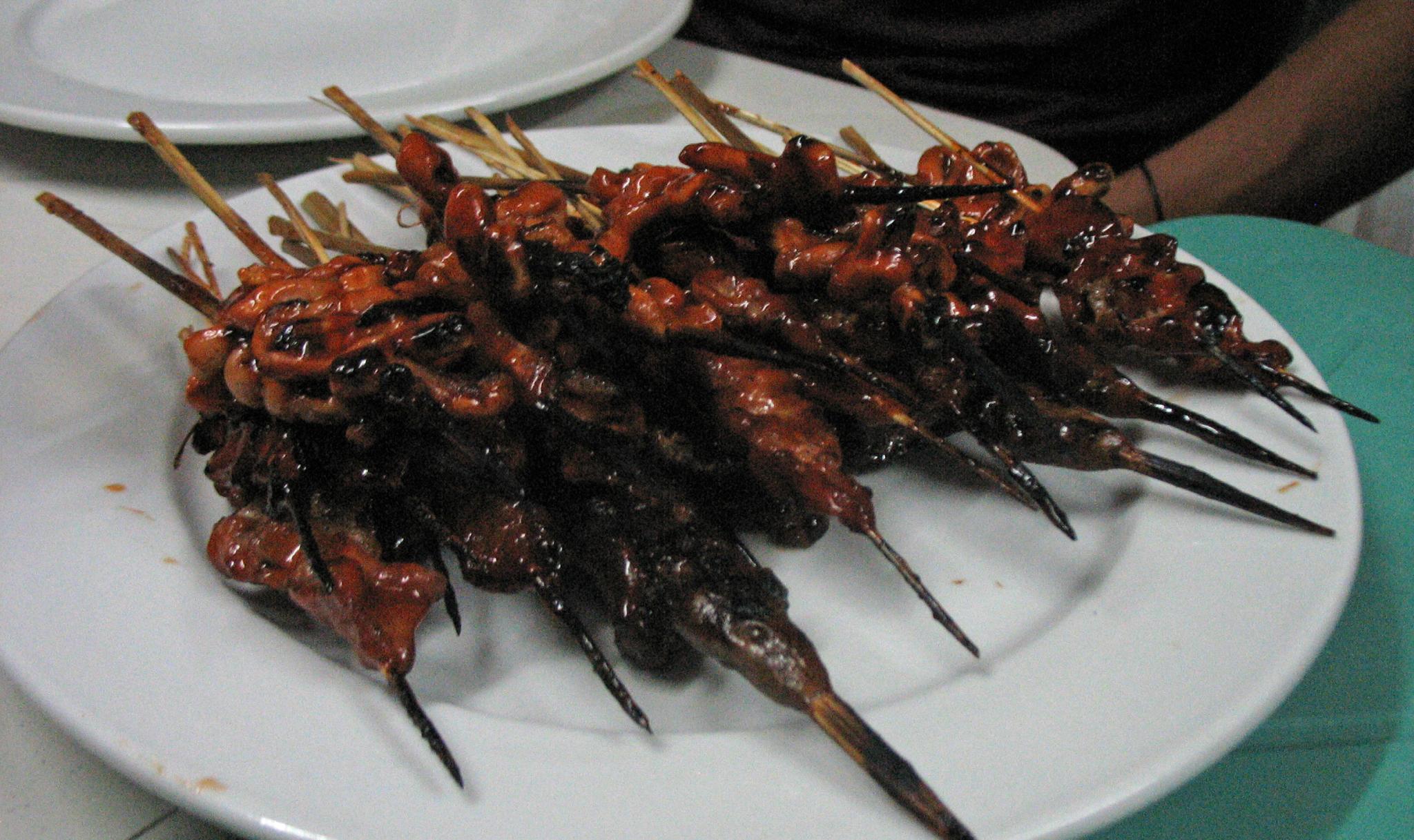 Despite the innocuous name, helmet is what street food vendors call barbecued chicken heads. Other than the beak being removed not a part of the chicken goes to waste in this dish, which takes advantage of the surprising amount of fat in the animal’s head. That’s not an exaggeration; nothing is wasted at a chicken cart, so crack open that chicken’s skull if you want to slurp out its brains.

Certainly not as unusual as other items on this list, this paste is a regular and heavy-smelling addition to many meals in the Philippines. It’s a briny condiment made from fermented shrimp or inexpensive fish—usually anchovies, ponyfish or perch—and brings the perfect amount of umami into the dishes it’s included in. The paste is often even used on its own as a marinade for steaks, a topper for stews or even as a spread on slices of unripe green mango.