You probably have realised from our blog we love theme parks, water parks, entertainment venues for the kids. Even before our kids we loved them. And while we have covered our share of parks in the US, we have yet to do the big 3 in Orlando!

One vacation plan that will send your kids to the moon is a trip to Florida theme parks. These amusement parks are designed for kids big and small - and have plenty to offer adults too.

Universal Studios Orlando offers visitors a journey into many award-winning movies through rides and performances. The rides vary from 3D theatre attractions to a high speed adventure with Mummies. Movies such as Shrek 4D, Twister, Revenge of the Mummy, Jaws, MIB, E.T., Disaster and Terminator 2 3D each is its own unique, unforgettable attraction. And the inside Mummy roller coaster is fun- flashing lights and darkness- so cool.

The streets in the park are filled with restaurants and shops, and there is usually a daily parade in the middle of the day. Just outside the park is Universal Orlando's CityWalk, a very popular nightlife spot. Both Mum and Dad and the kids can have a wonderful time at Universal Studios. You can get tickets to Universal Studios Florida with FloridaTix. Tip: Booking your Universal Studio’s tickets in advance through FloridaTix guarantees great savings compared to paying on arrival. 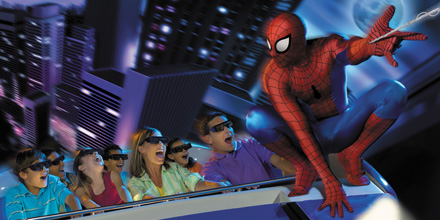 This is the busiest theme park of them all. The one everyone wants to visit. Similar to Disneyland LA, but bigger and some say better. The rides are for kids of all ages plus there is shopping, dining and nighttime parades. For the big kids a trip to Tomorrow Land to take on Space Mountain is a must, an indoor rollercoaster in complete darkness except the occasional twinkle of stars. The best ride in the park. Big Thunder Mountain Railroad - A gentle roller coaster for the kids and less adventurous of the group. Swiss Family Treehouse is a great place to take the young ones to explore a giant tree house. For those who prefer a more sci-fi cruise then Buzz Lightyear’s Space Ranger Spin is the choice. The ride takes you on an alien blasting mission, which will at most, spin your car around to face more robot targets; and the Monsters Inc. Laugh Floor comedy show will have you in giggles regardless of age.

Disney parks are amazing and everything in them is there for a reason and has some Disney design feature. A fun thing for kids to do while at the Disney theme parks is to collect autographs from the various Disney characters. The human characters, such as the various princesses, will speak with the children while they are giving their autograph.

Islands of Adventure has six areas: Marvel Super Hero Island, Toon Lagoon, Jurassic Park, The Lost Continent, Seuss Landing and The Wizarding World of Harry Potter. Entrance into Islands ocan set you back a pretty penny though with tickets about $80 per adult each day, with discounts for multi-day passes. However if you do plan to go one of the more interesting areas is called Seuss Landing. This theme park is designed after Dr. Seuss' books and is a real hallucinogenic trip back to the 1950s. This area of the park, very popular with the younger children, features The Cat in the Hat ride, a One Fish, Two Fish, Red Fish, Blue Fish ride, and Park River Adventure, Poseidon's Fury, The High In The Sky Seuss Trolley Train Ride, Harry Potter and the Forbidden Journey, Dragon Challenge, and Flight of the Hippogriff. 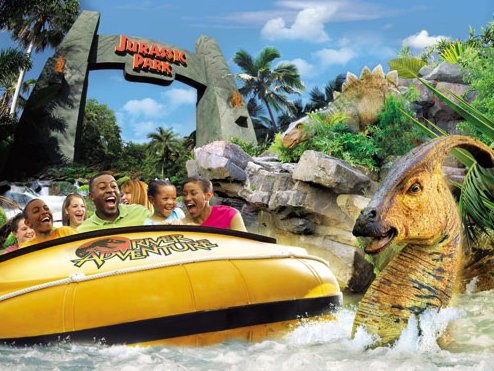 Florida is the place for theme parks. It's on every kid's dream list and if we be honest withourselves, every adults as well. So when you head to Florida this summer, why not give everyone a treat and head to the Big Three.

Written by Tasnim in conjunction with FloridaTix.

Hey Erin, We have done them all and loved them. We also ventured over to SeaWorld too. Love the Harry Potter at Universal and Disney Epcot and Animal Kingdom as well. It is all its own little world. Fun times!