Barcelona is home to many world-famous architectural marvels. But here's one you might not have heard of.

In the early 1900s modernism ad taken a strong hold on popular culture. This philosophical movement centered on the activities and creations of those who felt the traditional forms of art, architecture, literature, religious faith, philosophy, social organization, activities of daily life, and even the sciences, were becoming ill-fitted to the new economic, social, and political environment of the new fully industrialized world. From it emerged influential and gifted musicians writers, architects and artists including painters: Matisse, Picasso, and Monet, architect Frank Lloyd Wright and Antoni Gaudi, Writer Virginia Woolf, and many others whose influence is still felt strongly today.

In Spain, the hub for this new form of art and lifestyle, was its most cosmopolitan city, Barcelona. Here the new wealth that came into the city from the former colonies allowed new movements like modernism to flourished amongst the well-to-do of the city. By the early 1900s painters, architects, writers and poets filling the streets and displayed their work across the city.

Wealthy and stylish businessmen like Josep Batlló were eager to show they were supporters of the modernist movement. This is how it came to pass that many of the city’s elite built modernist styled homes on Barcelona’s Passeig de Gràcia, the most fashionable high end street in the center of town. Their dwellings were often more art than home, and each tried to better the last one built. 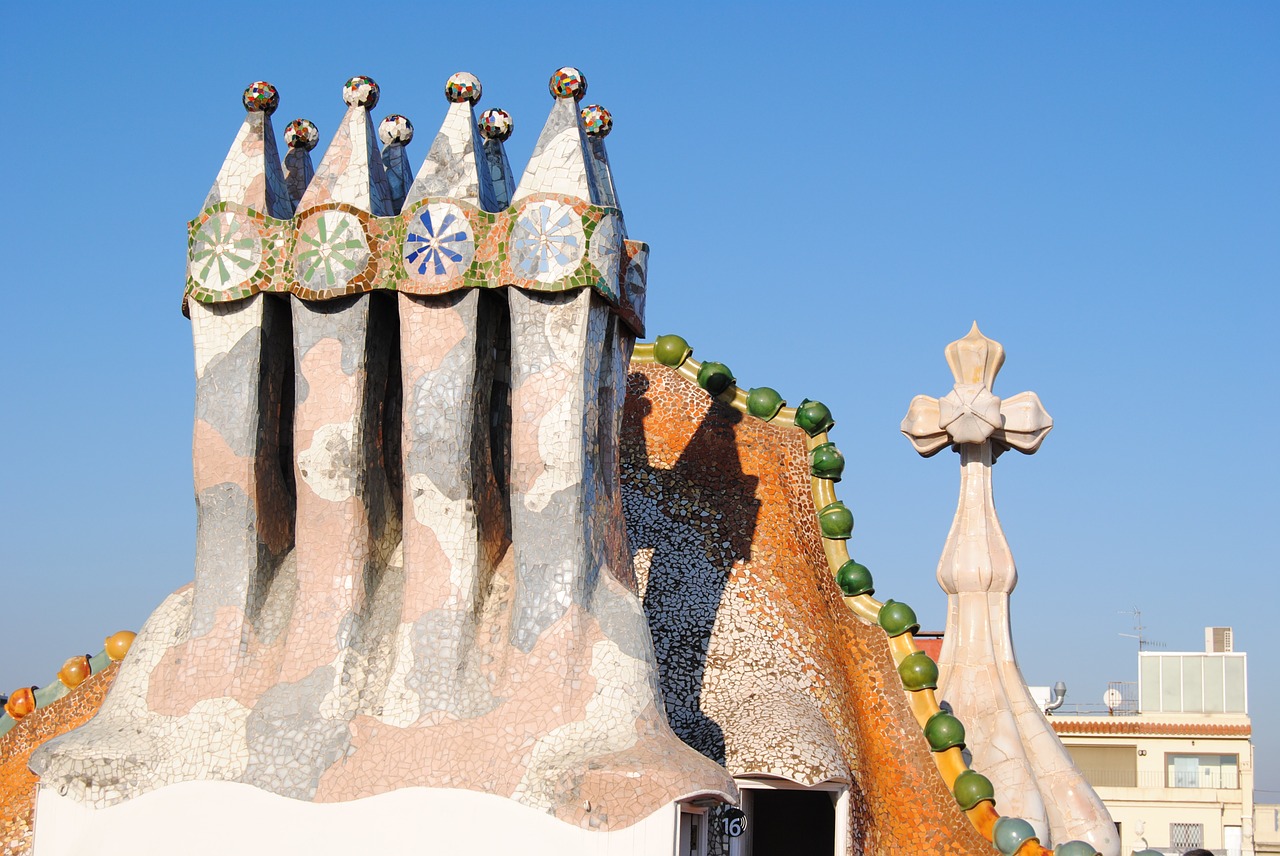 The building of Casa Batlló

To outdo them all, Josep Batlló bought a building and commissioned the city’s most famed modernist architect, Antoni Gaudi to construct for him a masterpiece of modern art. This building came to known as Casa Batlló, and it is one of Barcelona most prized landmarks.

Gaudi started with a basic building façade and was given complete freedom to create a unique and timeless interior and exterior. His vision was a colorful and enchanting delight for the senses that also faithfully fulfills its function as a living space for the Batlló family.  The house not only stands out from the others, it is also a unique treasure in the city and the world.

The design of the Casa Batlló facade gives insight into the imagination and playfulness of Gaudi. It is composed of stone and glass with walls that ebb and flow almost like waves. One highlight of the exterior is lime mortar and mosaic fragments of coloured glass and ceramic discs that cover the entire front face of the building. Another highlight is the roof of the building which is shaped like the back of a dragon and adorned with large iridescent scales.

The long gallery of the main suite or the Noble Floor, overlooking Passeig de Gràcia, features a long row of uniquely shaped wooden-framed windows that are decorated with pillars that are almost bone-like. Higher floors feature more unique sets of windows with one-of-a-kind balconies railings in the shape of masks that are made from a single piece of wrought iron. The entire building is fitted with modernist design cues like floral patterns as well. In its totality, the façade is a delight of organic elements and colors that inspire and transfix all who view it. 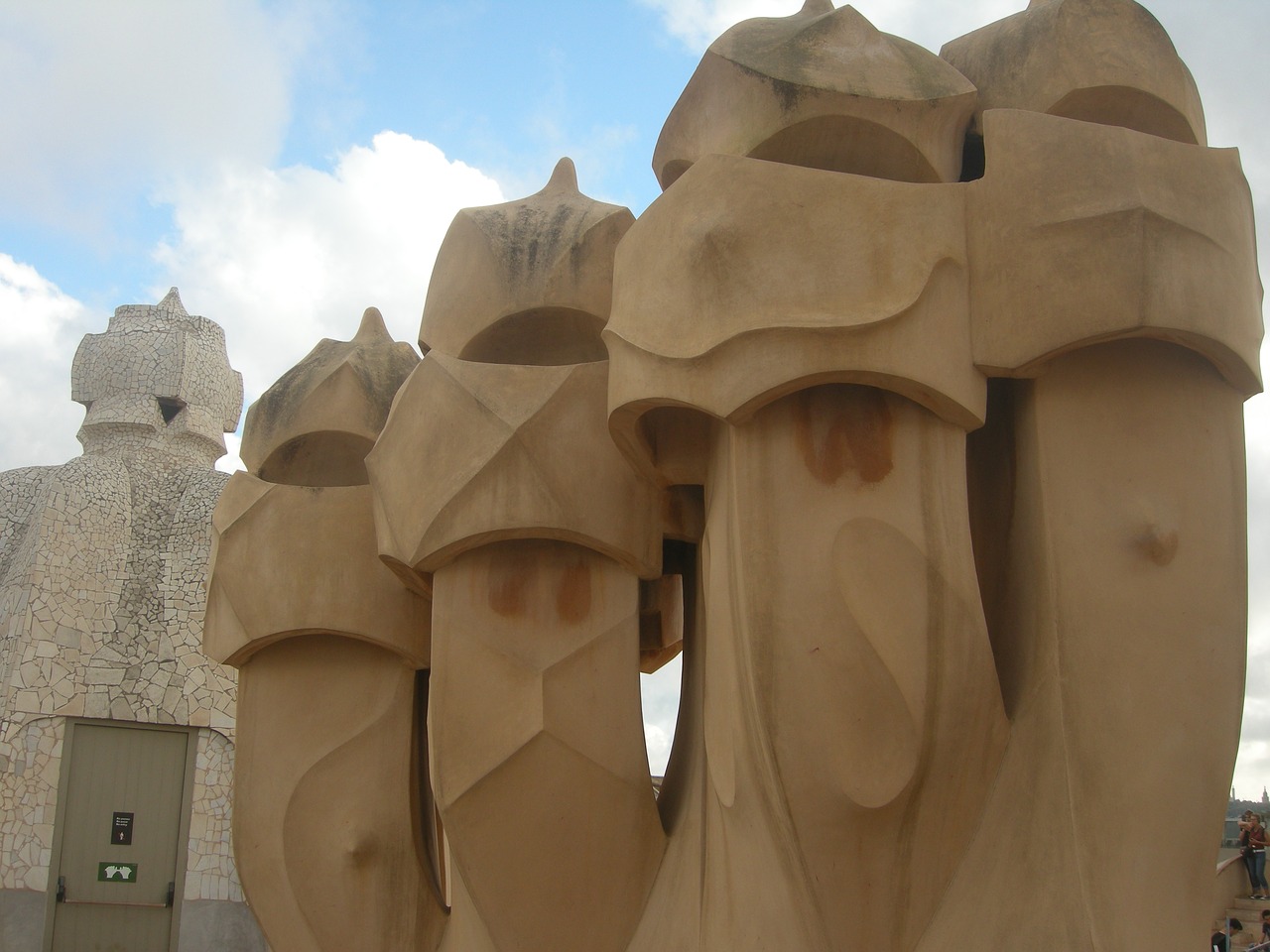 As stunning as the exterior of Casa Batlló is, the interior is an even bigger feast. The building features a private entrance hallway, accessed through a large door opening out onto the main communal hall. The motif is an undersea grotto lit by a series of curved skylights, hugged by gracefully curved walls and a spectacular broad stairway, highlighted with a uniquely carved wooden handrail.

This level has a myriad of rooms with fireplaces and large windows sitting below a flowing ceiling. There is also access to a gorgeous patio covered in circular tiles and blur green and red glass trencadís. The attic is characterized by 60 catenary arches, in a pristine white space, giving the feeling of being inside the ribcage of a great animal. Finally, the rooftop terrace overlooks the city and allows visitors to get up close to a prominent feature of the façade; the dragon’s back. Another prominent feature of the terrace are the four chimneys that are covered in beautiful mosaic glass motif. The rooftop terrace is often rented out for events.

Casa Batlló is open every day of the year from 9:00 AM to 9:00 PM and the rooftop deck is also available to be rented for events. There is a limited amount of guests permitted in the house and sometimes there is a line so it is best to go to the website and buy tickets online to insure you are booked for entry at the time you wish.

There are many things to see in Barcelona, but none are more intriguing and delightful than Casa Batlló, the nearly 100 year old masterpiece of architecture by modernist great Antoni Gaudi.

Juan is a Spanish traveler and loves to explore Spain in a new and adventurous way. He has tons of travel advice in Spain!