What and Where to eat in Edinburgh

Jason must have known we are real foodies and while our upcoming trip to the UK did not have Scotland in it's path we just might make our way there for some of this delicious Scottish cuisine.

As the capital of Scotland, it is hardly a surprise that Edinburgh is replete with a whole host of different dining options. From haute cuisine to traditional Scottish fish and chips, the discerning visitor can find almost anything they desire in the streets and surroundings of this ancient city.

For those determined to eat at only the best restaurants, the Pompadour by Galvin is arguably now Edinburgh's finest dining experience. In the years immediately after the war, the Pompadour was the place to be, situated as it is in the magnificent Caledonian Hotel. In the last few decades, however, this architecturally listed building had begun to fade and the charms of its expensive restaurant had been superseded by other establishments. Recently, following a £24 million renovation project by the Hilton Group, and a take-over of the restaurant by Michelin star recipients Chris and Jeff Galvin, the Pompadour has begun to reclaim its former place. With spectacular views over Princes Street and to Edinburgh castle, its sightlines are peerless, and its French inspired menu with fresh Scottish ingredients has been drawing the crowds.

One of its few competitors at the top end of Edinburgh dining is located just a few minutes walk away on Princes Street. The Balmoral Hotel plays host to the Michelin starred 'Number One' restaurant, where Executive Chef Jeff Bland presents a somewhat more traditionally Scottish menu, complete with wild salmon and Orkney reared beef. Whilst Number One is also on the expensive side, it is well worth a visit if a luxury night out is the aim. As with the Pompadour, its location right at the heart of Edinburgh makes it an ideal choice for dinner following a day seeing the sights. Just make sure to have a reservation! 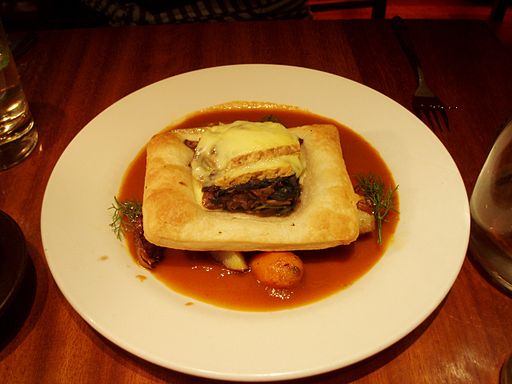 Of course, Edinburgh is also known for its theatre, and a quick pre-performance meal can be had at the Café Royal on West Register Street. Specialising in mussels, oysters and other forms of seafood, it has long been a favourite of tourists not only for its menu, but also for its atmospheric dining area and fine selection of whiskies and ales. If your taste for fish has not been sated by that visit, however, you should consider spending some time at the Tailend Fish Bar in Albert Place, which is widely regarded to be one of the best seafood establishments in the city. Don't be fooled by its cheap and cheerful appearance! For an even more Scottish dining experience, drop in to Jenner's Department Store on Princes Street, and spend some time in the food court. You'll soon track down the finest haggis in the city, and will be able to say that you have had the most authentic Scottish food of them all.

In order to expand one's dining horizons, however, it is important to get out and about in the countryside around Edinburgh. Some of the best traditional cuisine can be had in the many pubs and small restaurants surrounding the capital, and getting out into the more rural parts of Scotland is a must-have experience. Whilst an excellent meal can be found almost anywhere, one of the best establishments is Melville Inn in Lasswade. Located next to Melville Castle and Sheriff's Hall, the savvy tourist can combine superb historical sight-seeing with a reasonably priced dinner to follow. Such an excursion is only possible with appropriate transport, of course, which makes the importance of looking into car hire in Edinburgh obvious. Outside of its major urban areas, Scotland is one of the most sparsely populated countries in Europe, and public transport is not always reliable. With a hire car from one of the major operators, the entire country - and its cuisine - becomes available to the enthusiastic visitor. Seafood, haggis, and grass reared beef are just waiting for your visit!

Jason Smith has been on many travels to Spain, Germany, Scotland and various places in Europe. He enjoys sharing his experiences and writing about where to go and what to do in each location.