You could see their brains working – tick, tick, tick. The confusion behind my daughter’s bright blue eyes as she considered what we had just said. Were we joking? Did we mean it? Could they really pick up mud and put it all over themselves, play with it, squish it, roll in it? “Go on,” I encourage and, hesitantly and with some suspicion, my daughter took a lump of black Dead Sea mud offered to her and squished it between her palms. “It’s icky squishy mud!” She exclaimed. And I helped her start to cover her entire body in every kid’s dream come true. 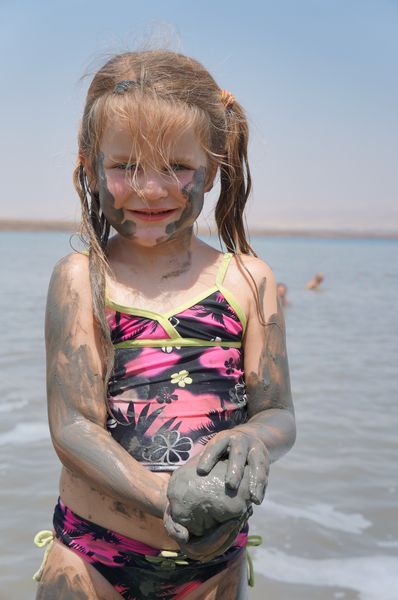 Abraham Tours have a wonderful day tour south of Jerusalem. It was a big day starting at 7am. We were collected from our hostel after gulping down the free breakfast that opens every morning from 7am – 10am. The mini bus was small, but had uber comfy seats that reclined quite substantially. 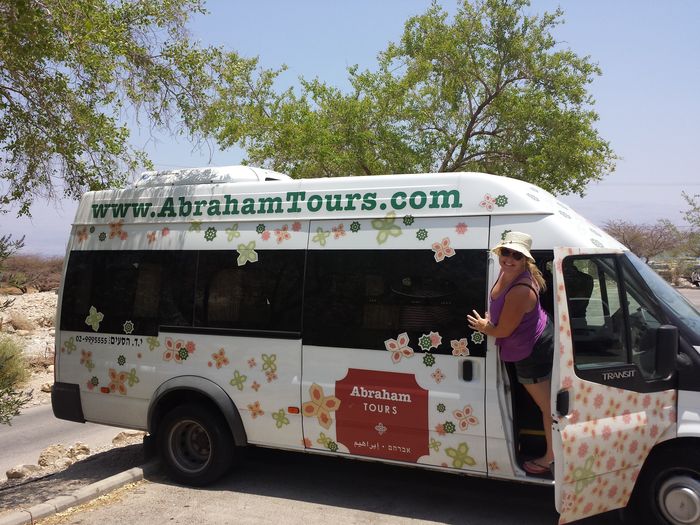 The tour runs every Monday, Tuesday, Thursday and Saturday and costs 275NIS per person (AUD$83). Leaving Jerusalem, we travelled south through the sun-scorched Judean Desert to the foot of the Masada fortress, which towers over the Dead Sea, about 9am. Bypassing a Bedouin taking money for a camel shot. 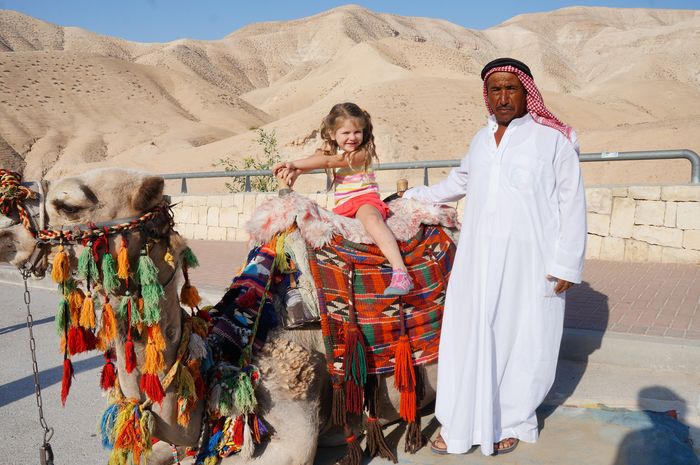 Our driver gave us a time to be back on the bus and left us to our own self-guided meander. With limited time, two young kids and the day already heating up fast, we opted to skip the Snake path and utilise the cable car. The cable car was 49NIS ($13.70) per adult and kids under 5 were free. 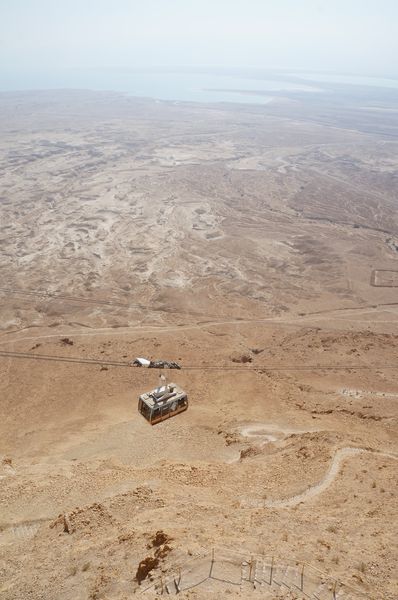 You can read a deeper history and description of Masada on Tourist Israel. However in brief: King Herod built the fortress of Masada in the year 30 BCE. His son’s failed to be as successful as he was and it slowly declined. In 68 CE the site was conquered by a group of Jewish zealots. Romans besieged Masada and 2 years later succeeded in reaching the steep fortress after constructing a huge earthen ramp on its western side. After holding out for 2 years the Jewish zealots decided to commit suicide rather than be captured. The remains of the fortress of Masada are well preserved and have been reconstructed in an effort to pay homage to the site and its heroic inhabitants. The most impressive structure on Masada is King Herod’s northern palace, built on three rock terraces overlooking the steep gorge below.

Masada is a UNESCO World Heritage Site and as far as palaces and fortresses go, has to be one of the most breathtaking as it sits high on the rocky plateau over looking the Dead Sea as far as the eye can see.

The cable car was fairly quick and once at the top it was easy to walk around, reading the little signs at each stop or eavesdropping on the numerous of other tour guides there. We were there quite early so it wasn’t too bad and we wandered freely among the ruins admiring the immensity of it all. Oh I wish I could have seen it when Herod built it. 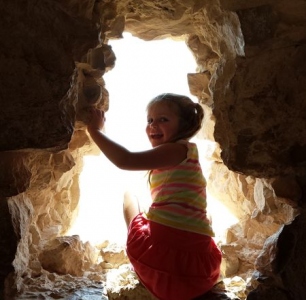 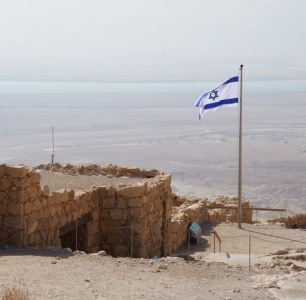 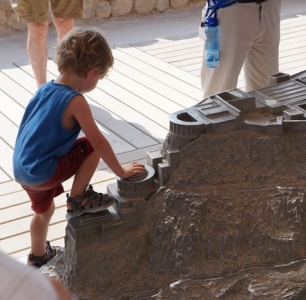 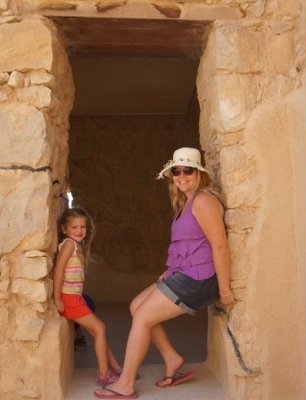 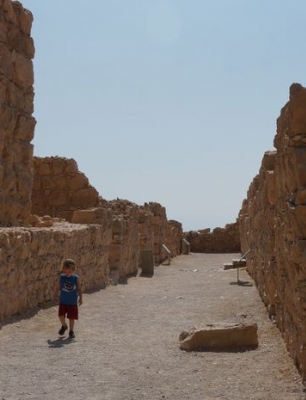 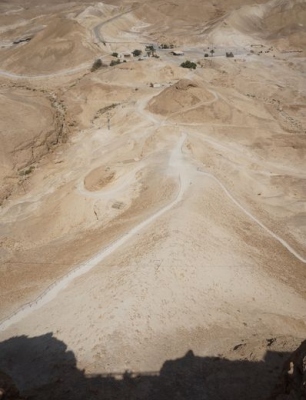 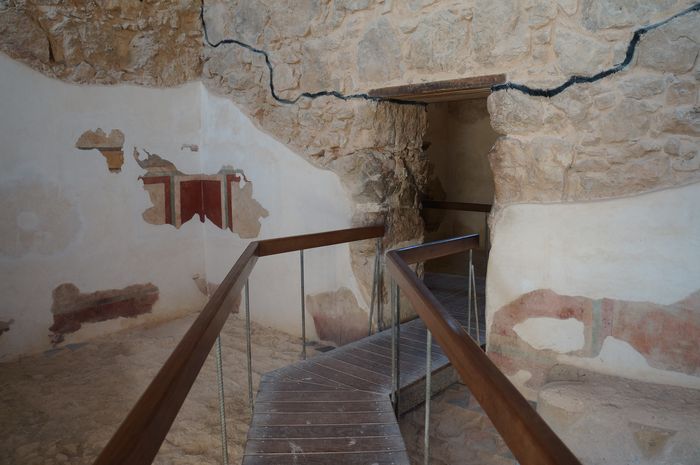 It started to get very hot around 10:30am so we made our way back down the cable car, bought ultra expensive ice creams and headed back to our bus, relishing the super cold air-conditioning.

We continued on to Ein Gedi Nature Reserve, an oasis in the desert. Entrance was 29NIS ($8.70) per adult and kids under 5 were free. The cost would have been worth it if you planned to spend the day and hike to every waterfall. With kids and only an hour to spare, we hiked to the closest one. As far as waterfalls go it is not the biggest or the best and the stream is certainly not deep, but when you see the backdrop and see it for what it is – an oasis in the desert – it’s pretty remarkable. 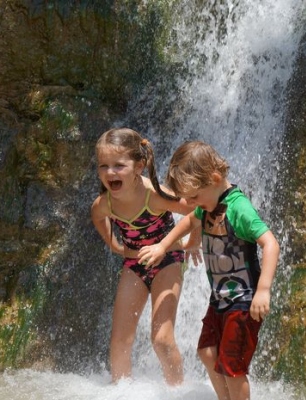 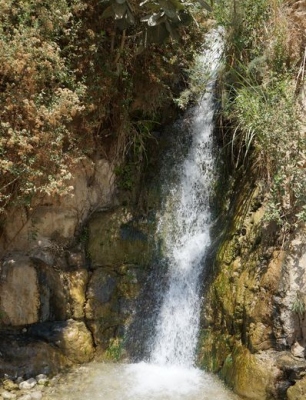 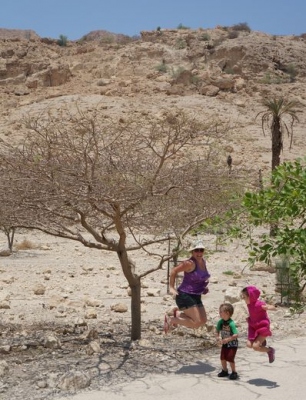 The kids enjoyed getting wet after such a hot hike through Herod’s palace. But with little shade in the beautiful oasis it wasn’t long before we packed up and made our way back to the entrance. We sat down for a sandwich and drink before everyone else arrived and we were back on the bus.

Finally we headed to our last destination - the one everyone had been waiting for. The lowest place on Earth. The Dead Sea. 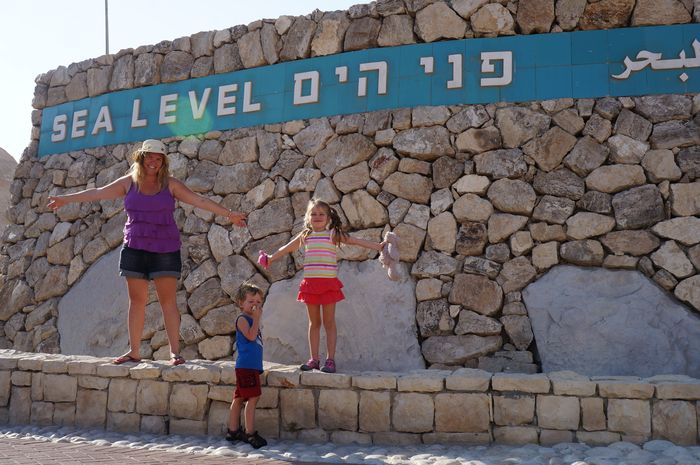 The Dead Sea is made up of 33% salt, that’s ten times the normal amount found in the ocean. It is labelled the Dead Sea cause nothing grows in it. Because of it’s salt content you can float in it with ease, read a newspaper, lift your legs and arms high out of the water, anything. Well, almost anything. The tour included entrance to the private beach. There was a gift shop, bar, pool and tables and chairs for use, as well as toilets and showers. 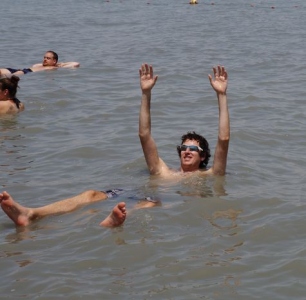 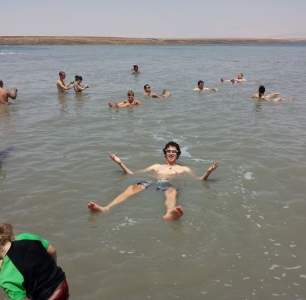 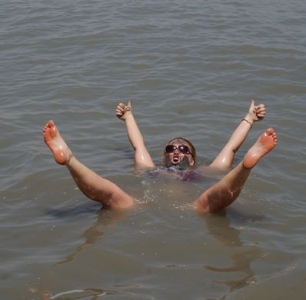 The amazing thing about the Dead Sea is how much it has actually receded over the years. Even from the 7 years prior when we first saw it, it has withdrawn significantly further. Experts believe, unless something is done, within 30 years it will no longer even exist. This would be terrible, but since the water no longer flows from the Sea of Galilee and the droughts have stopped any rivers from the desert there is no way the Sea is being naturally refilled. There is an idea they may be able to transfer water from the Red Sea, but no one is sure of what the repercussions for the Dead Sea will be once mixed with regular sea water.  The whole way down the beach you can spot lifeguard towers. When the water drops, they just erect a newer one closer. There is even a hotel that was built right on the water in the early 1980’s that now operates a shuttle to get to the sea since it is quite a distance from it now. 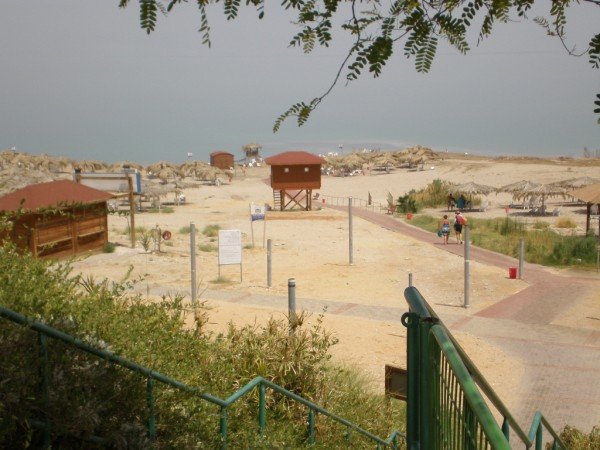 As the day was now in extreme heat we headed straight for the water. Before I could even get in my youngest was screaming in pain. You see any small cut, knick with the razor, open wound that you didn’t even know you had, immersed in the salty water starts to sting and she found that out. Thankfully this beach has a fresh water hose right near the seashore for such circumstances. She was not the only one as soon my son was being raced there after rubbing his eyes with his salty hands.

After that the kids decided to stay out of the water. Normally this would have been a problem except someone offered them mud and I encouraged them to play with it. It was like Christmas, Easter & birthdays rolled into one. Mia was hesitant at placing it on her body and needed some coaxing, but soon could not stop playing with it. Better than play-doh, and cheaper too. 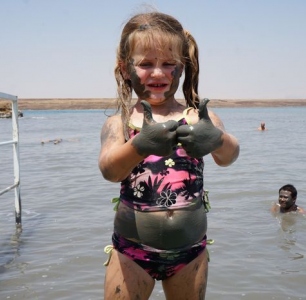 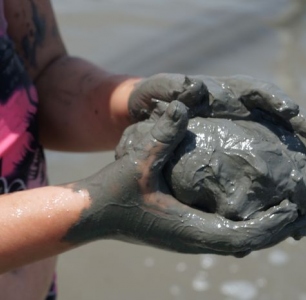 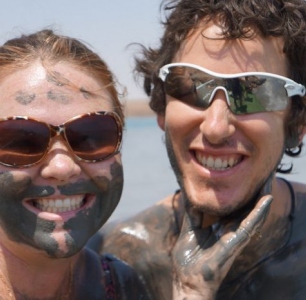 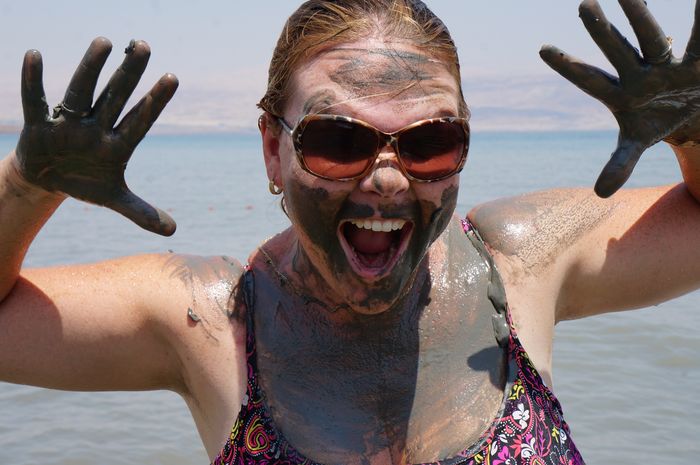 Josh and I both had a good soak in the water and then hit the mud too. After our happy snaps and letting it dry, to get the most out of the expensive Dead Sea products you usually buy but we had free access to, we all went to rinse off. We spent some time drying in the sun before heading back to the delicious refrigerated gift shop and straight onto our icy bus.

The kids slept the whole journey home and we had fun chatting and taking to all the new friends we had made on the journey. While the tour is designed for the independent traveller, there is just enough information and hand holding to get you going before you tackle each destination yourself and the guide was always helpful, specially with our Dead Sea snaps.

There are not many tours that encompass these three wonderful destinations into one and if you plan on spending a day at the Dead Sea then don’t miss the opportunity to at least visit Masada as well. It will blow your mind.

This is just a sample of all the awesome photos we took this day. Check out our Photo Journal for the rest. 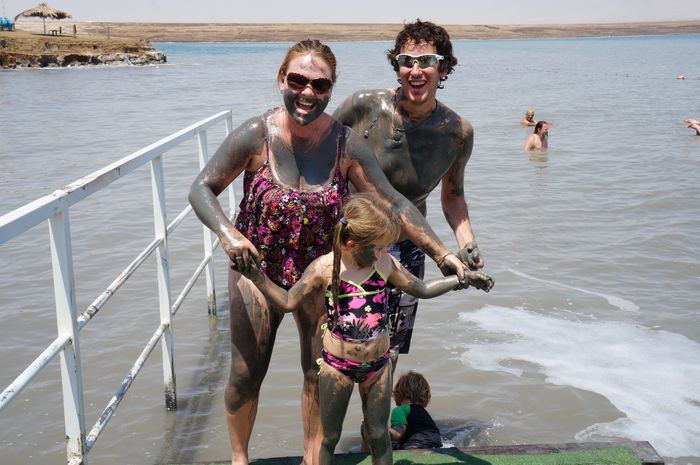 "I respond to every comment by private email. So please leave me comments, I love chatting to you" - Josh Bender
Posted by Heidi Wagoner on Jul 16th, 2013
Oh that looks fantastic. There are mud baths not to far from Alicante, Spain and we hope to go either late Aug or in the Fall. Now I can't wait!
Posted by Bethaney - Flashpacker Family on Jul 16th, 2013
Wow! That looks like SO much fun!!!!

Love the new moving panorama shot. That's an awesome feature. :)
Posted by Jennifer on Jul 16th, 2013
How fun! We went to the Dead Sea in Jordan and of course took the photo floating with a magazine. But we didn't cover ourselves in mud. I definitely want to go to the Dead Sea again when I head to Israel in October.
Posted by Karin on Jul 16th, 2013
Very interesting xx
Posted by amber on Jul 18th, 2013
i had no idea the dead sea was disappearing. truly sad. i should probably convince my husband we need to go ASAP
Posted by Josh on Aug 16th, 2013
Love these photos
Posted by Malinda @mybrownpaperpackages on Apr 24th, 2015
This is exactly what I was imagining for my wanderlust this week! This tour looks like it would be good too. I don't often like tour groups but I do like the ones that help you just a little and leave the rest up to you.
Thanks for linking this up with #wednesdaywanderlust this week - a perfect match!
Posted by Maral Alto on Apr 4th, 2018
Great event! I like your dead sea pictures ☺
Posted by Syrus Wonsey on Jan 5th, 2020
Mia looks so cute in the mud.