Jaw Dropping History: Our Journey from Nazareth to Jerusalem

Our bus was set to leave at 7:30am from Nazareth. This time around we only had one other passenger travelling with us. Melissa was a delightful young lady studying African migration to Israel for her thesis. She was delighted to have company since she made the journey to Nazareth by herself on the previous day and we enjoyed her company.

The bus runs on Monday, Wednesday and Friday. Josh had accidentally, but very frustratingly, left his camera in Jerusalem so we were relying on his smartphone camera to capture the moments. Thankfully the beautiful Melissa had an awesome camera and donated her pictures to us for use – thanks Melissa!

We had a different driver this time and he seemed almost shy, nothing like our talkative guide on the Coastal Route. He refused to use the microphone so we could not hear much of what he said, which wasn’t much anyway. He didn’t really explain where we were going or what we were doing, just dropped us off and told us when to be back. I found this very frustrating because I had no idea about some of the places.

I later found out there is a free app you can download that has a description of each place on the journey. This would have been wonderful if the driver could have told us about this app at the beginning of the journey. But we made the most of it and Wikipedia on the phone filled in the blanks.

Our first stop was Safed. Located at an elevation of 900 metres (2,953 ft), Safed is the highest city in Israel. Since the 16th century, Safed has been considered one of Judaism's Four Holy Cities, along with Jerusalem, Hebron and Tiberias. More widely known, however, is that the city has remained a center of Kabbalah, also known as Jewish mysticism.

Most tourist busses drive to the top of the town, but not our driver, he wanted us to work. He dropped us at the very bottom where we struggled to climb the many steps to the top. 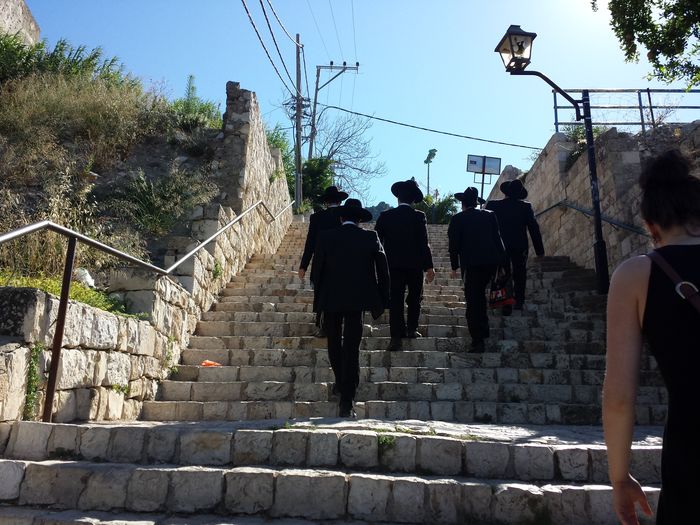 We reached the monument near the highest place of the town where one of the decisive battles in the 6 Day War took place in 1967. We found a convenient ice cream shop and a well-equipped playground where the kids played and ran around. It was a long stop and one we didn’t feel really needed it, unless you’re an art fan as the city is jam-packed full of colourful artwork. Finally it was time to go back to the bus. We wandered through some alleyways and found delightful local paintings and handmade items. We even stopped to have a conversation with a lovely old gentleman who told us we were completely blessed by our children. We agreed. 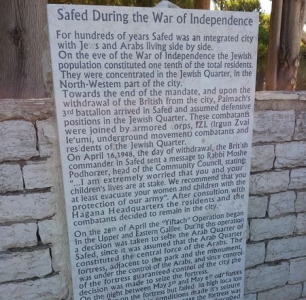 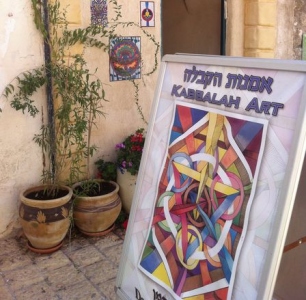 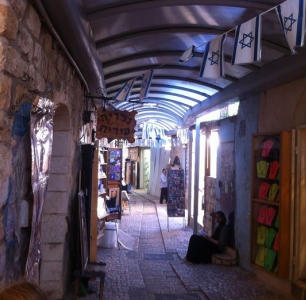 Back on the bus we headed to our next stop at Capernaum. We had been to Capernaum on our Golan Heights tour so were rather disinterested until we realized we were going to the pink domed Greek Orthodox Church. The Orthodox Church is located on the eastern side of the ruined village, the hometown of Jesus. And it is pink. 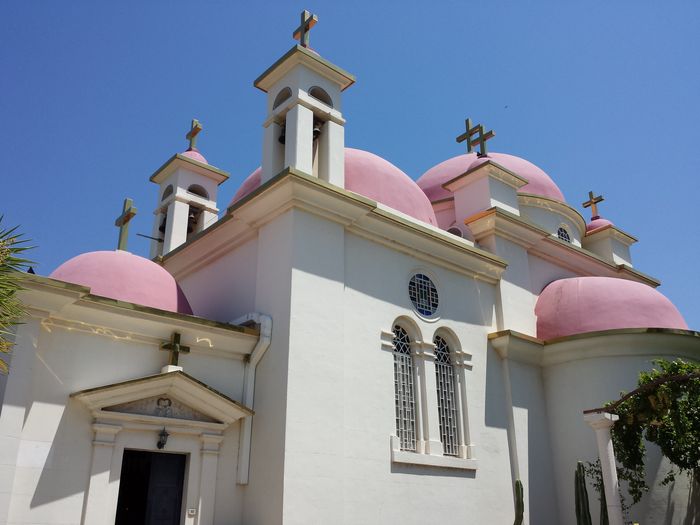 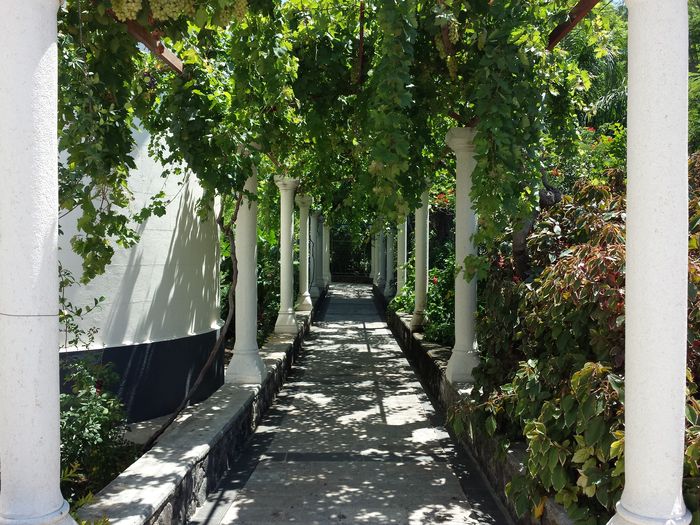 The Church has free entry and is magnificent. The interior is filled from floor to ceiling with painted murals on the life and death of Jesus Christ. Intricate and fascinating, each picture telling a whole bible story. It was astonishingly beautiful, in fact one of the most beautiful church interiors Josh had ever seen.

Outside the Church the grounds are shady with grapevines and manicured gardens overlooking the Sea of Galilee. The site of the church was selected as it was believed to be where the disciple Peter walked on water. 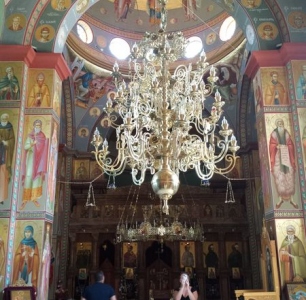 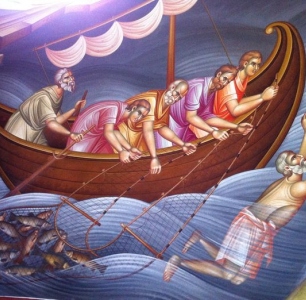 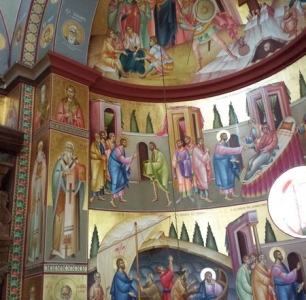 It was a long drive after Capernaum as we skipped Tiberias and made our way through the Jordan River Valley until we came to Beit Shean. The kids were asleep by this point and we didn’t want to take them out of the air-conditioned bus into the extreme heat so Josh opted to stay in the bus with them while Melissa and I explored the ruins. 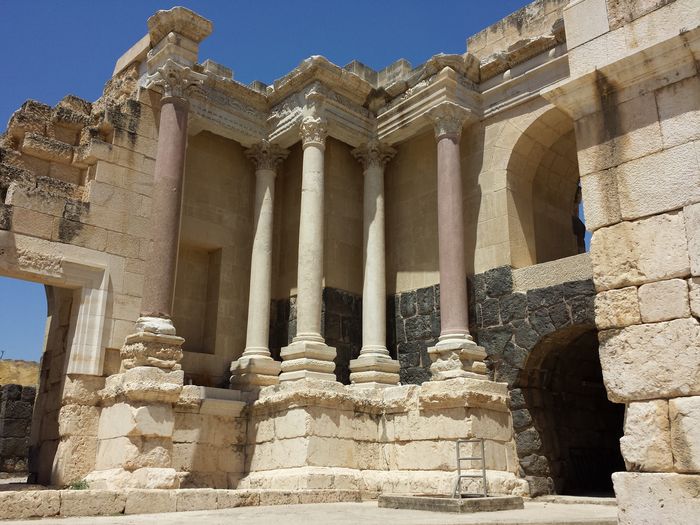 Beit Shean had an important historical role due to its geographical location at the junction of the Jordan River Valley and Jezreel Valley. It is estimated that the settlement began 5000-6000 years ago. A tour of Beit Shean is like a walk through time, it is one of the most ancient cities in the country. 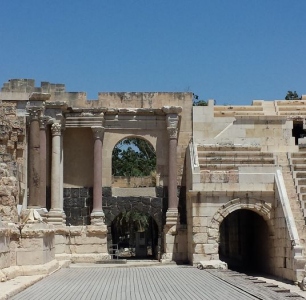 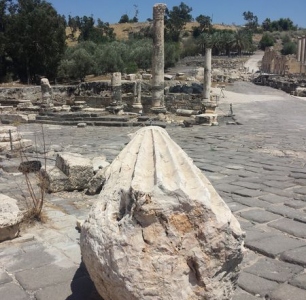 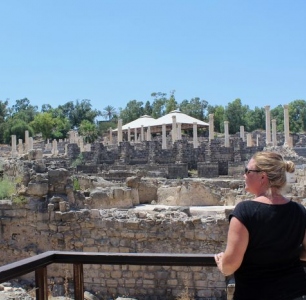 The city had many conquerors, among them the Egyptians some 3,500 years ago. A few hundred years later, the Philistines conquered it, it also became part of the kingdoms of David and Solomon, and was eventually destroyed in a fire, apparently at the hands of the King of Assyria in 732 BCE.

The city extended over an area of some 370 acres, and you can still see the remains of the wall that surrounded it. In addition, several impressive buildings have been uncovered in the national park, including a theatre (still used for events and shows), a public bathhouse (the largest found to date in Israel), two magnificent colonnaded streets, a Roman temple and loads more. 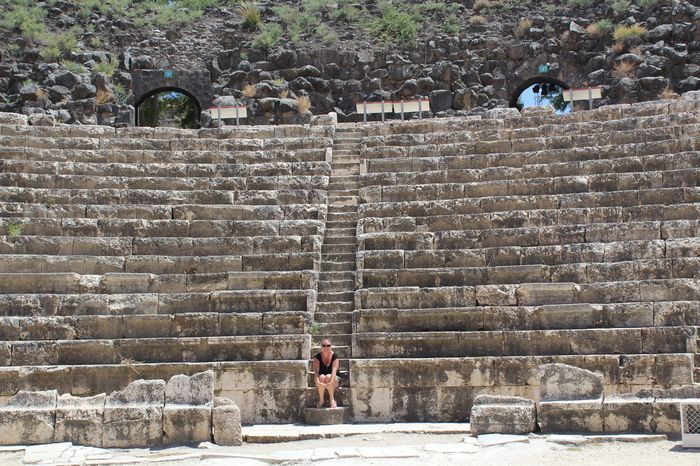 I loved the whole area. It was captivating. It was also extremely hot and Melissa and I only managed about 40 minutes in the scorching 40-degree sun before retreating into the gift shop for some water and air-conditioning. We then sat in the shade for 20 minutes awaiting the return of our bus.

Back in the bus we passed by the Allenby Bridge Border Crossing and bypassed the northern end of the Dead Sea to a lookout at Wadi Qelt for one of the most remarkable sights I have ever seen. 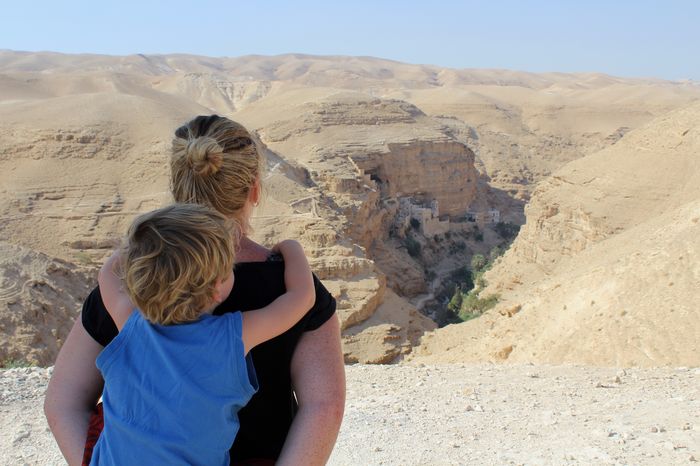 Climbing a rocky hill in the hot afternoon sun, we met a friendly Bedouin youngster desperate to sell us locally created paraphernalia. Instead Josh offered him his very own sunglasses. The kid was over the moon. Once we crested the climb we stopped in amazement. 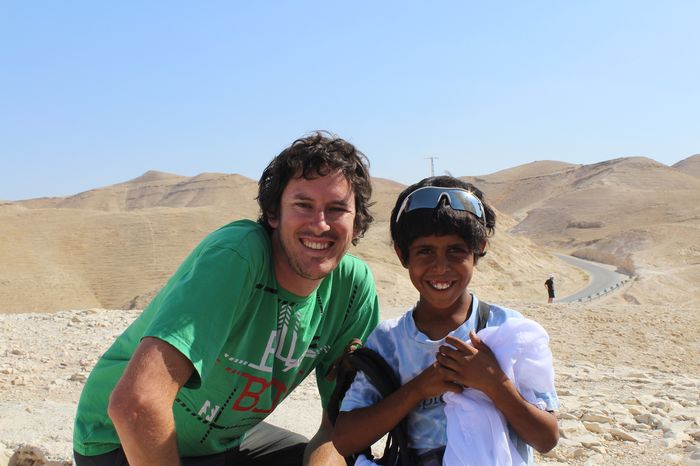 Across the valley clinging on the side of a cliff was a sixth-century monastery, still active and inhabited by Greek Orthodox monks. It can only be reached by a pedestrian bridge across the Wadi Qelt, which many imagine to be Psalm 23's Valley of the Shadow. We never got to actually visit it up close, but the views across the valley were magnificent and I sat for a while admiring the structure. It is almost like a fiction novel jumping out of the pages. 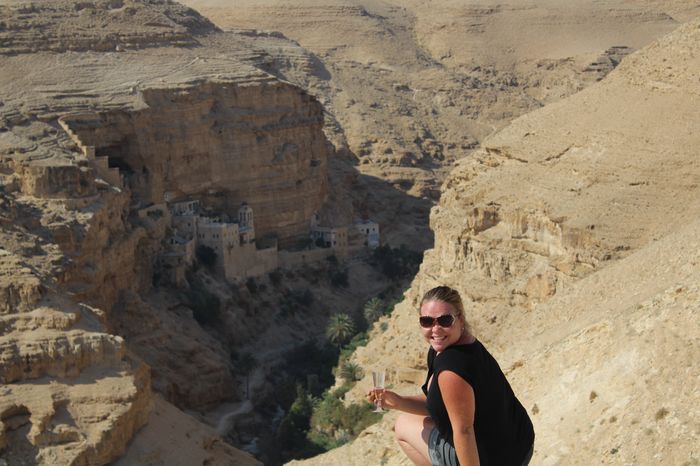 St. George's Monastery began with a few monks who sought the desert experiences of the biblical prophets, and settled around a cave where they believed Elijah was fed by ravens.

I would have loved to see it up close, but the site is only accessible by ATVs or via a 2-hour walk. 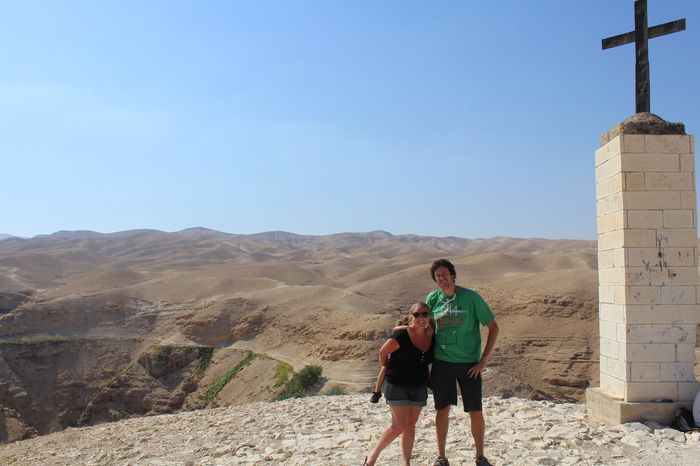 We climbed back aboard our bus and made the last half hour trip back to Jerusalem. We made farewells to Melissa hoping to meet again on our travels. We reclaimed Josh’s camera at Abraham Hostel and headed to the parking lot where we had left our car for the last few days. As it was evening no one was manning the parking lot boom gate, which they just left open, so we effectively had free parking.

It was a short drive to our friend’s house in Talpiyot where we settled in for the night before our journey continued into the unknown wilderness. 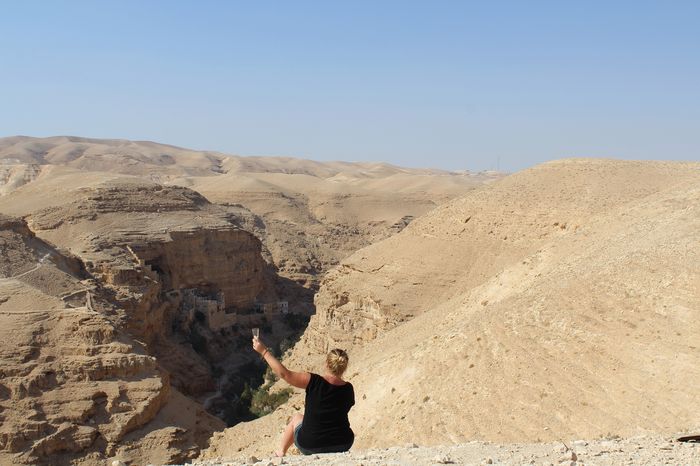 "I respond to every comment by private email. So please leave me comments, I love chatting to you" - Josh Bender
Posted by Ruth - Exploramum on Feb 12th, 2015
So glad I got to find this article through a link on another web-site. Good can come out of bad. Hope it brings you a lot of readers.