Rotterdam is home to the most prestigious flagship of the Holland-America Line. She no longer moves or sails, but proudly holds a permanent berth at the third Katendrechtse Hoofd as a symbol of the city’s achievement.

She sailed the world from 1959 for nearly half a century before coming home in the year 2000 where she now enjoys her retirement as a 4 star hotel, conference centre and tourist attraction. She is the one and only ss Rotterdam. 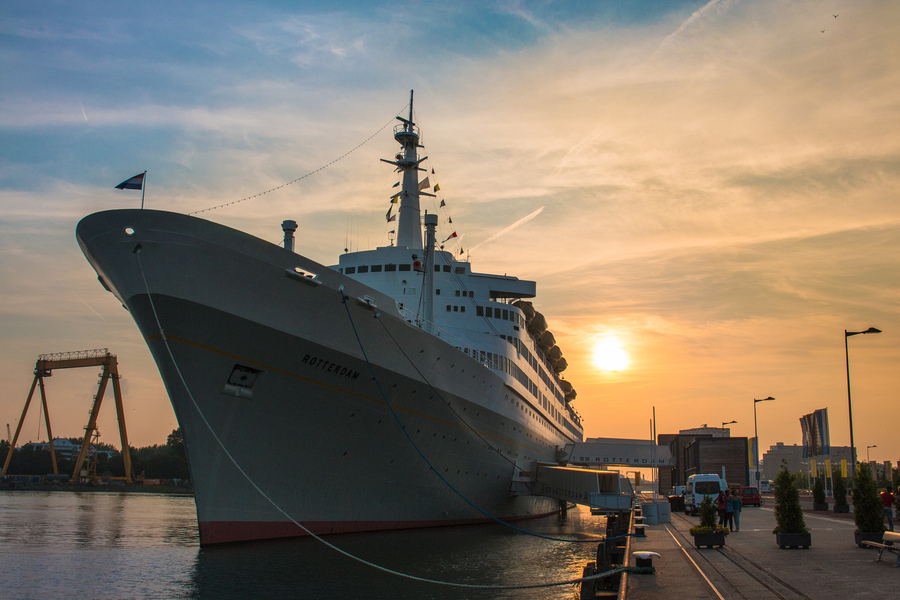 The ss Rotterdam is situated south of the city centre along a peninsula. To reach the ship you can catch a bus (to the end of the line) from the train station and it’s a short walk from there. Most people arrive in a car or bike.

Nearby is a relatively new playground if you prefer not to leave the vicinity, but other than the ship you won’t find restaurants or entertainment in the immediate surrounding area.

They provide a free shuttle service to the train station that runs everyday, albeit strange times. Checkout was at 11am, but the shuttle stopped at 11 and didn’t start up again until after 2pm so if you were checking out there is no way to get to the train station except wait for the public bus with all your luggage or order a pricy taxi.

Alternatively we found the water taxi, which while expensive, was a much faster option to get to the city than bus and rail. 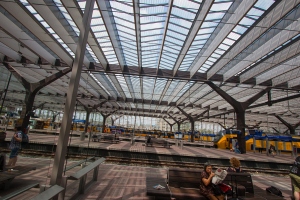 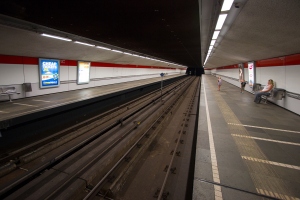 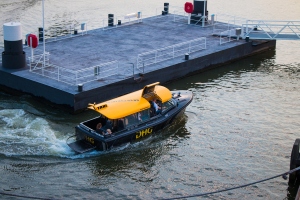 Set out in its original 1950’s panache the rooms hold true to 3 traditional themes – Original, Manhattan and Bahamas.

Our room was an extra large suite in the Bahamas theme. It held a large super comfy king size bed and bathroom, and the second half of the room contained a desk, living space, bunk beds for the kids along with a super large closet for our bags. You won’t find that on cruise ships anymore.

Wired Internet access is available in the room, while the reception area has wireless access. Tip: we used our Mac laptops to create a private in-room Wi-Fi network that was easy to setup.

We had particularly fine weather while we were in Rotterdam and unfortunately the air conditioner in our room was relatively underpowered. A staff member came to look at it, but said that it was working as best it could and there was nothing he could do. We requested a fan and he kindly said he would do his best.

When he returned a few minutes later he delivered a fan, albeit with missing legs so couldn’t stand up without the aid of the wall, but it provided the relief we needed. Normally the weather in Rotterdam wouldn’t be so hot, so I’d consider this experience outside the ordinary. 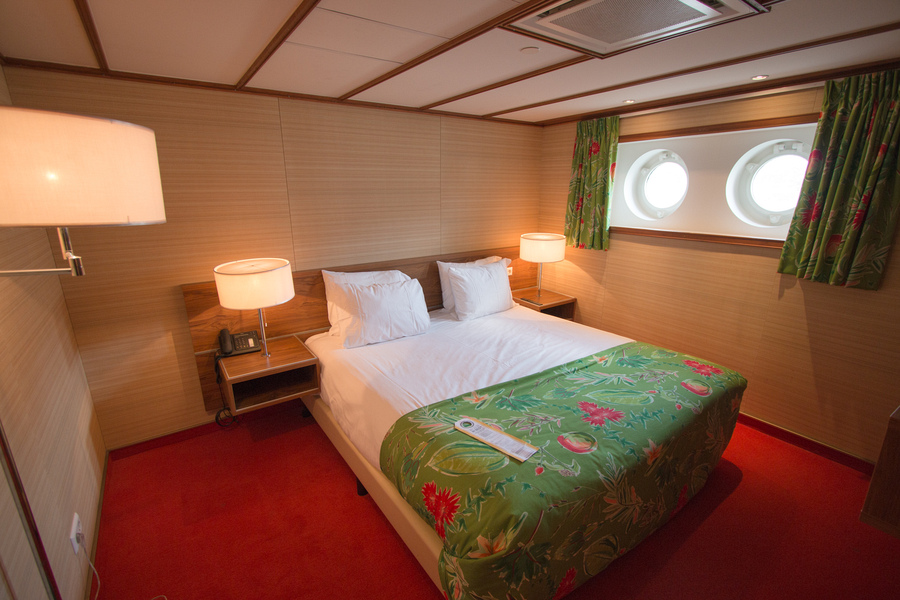 Like most cruise ships the ss Rotterdam provided a buffet breakfast in the Lido restaurant.

It consisted of cold meats and cheeses, cereals and hot bacon, sausages and eggs. It was as good as far as buffet food gets when feeding a large numbers of people.

My favourite part was the Dutch chocolate sprinkles and rusk. It brought back many fond childhood memories.

There is something not quite right about being on a cruise ship without all the perks of being on one. The kids were constantly asking about the kids club, which didn’t exist, and most of the rooms and activities you would find on a cruise liner also didn’t exist.

There were no set activities, no music or towel folding demos. The pool was modified into a knee-deep paddle pool for cooling off feet.

It’s an unsettling feeling being on a cruise ship that doesn’t cruise. Really, when you think of it as a hotel that looks like a cruise ship rather than an actual cruise ship, the experience is much smoother. As a ship-themed hotel, it does a first-rate job, from the room styling to the staff uniforms to the décor, it all matches. So if you’re looking for a hotel with a difference, the SS Rotterdam is perfect for you. If you’re looking for a cruise experience, then you’ll need to find an active cruise ship. 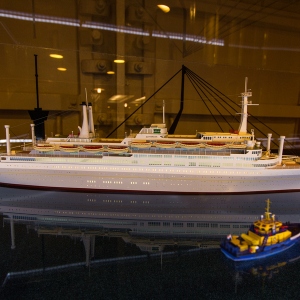 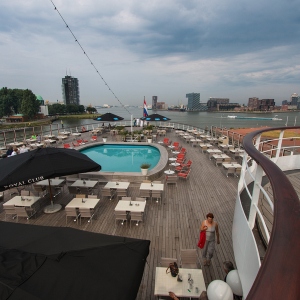 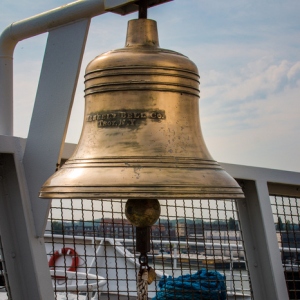 To feed our fascination with the ship, we undertook a guided tour around the ship to see how it used to run with its majestic dining areas and inviting theatre. Many of the larger rooms, such as the nightclub and theatre have been repurposed to host functions and events. 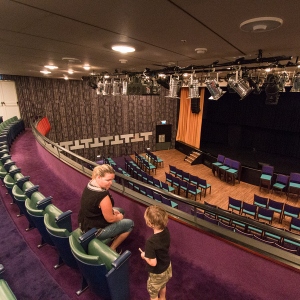 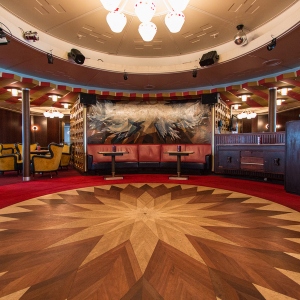 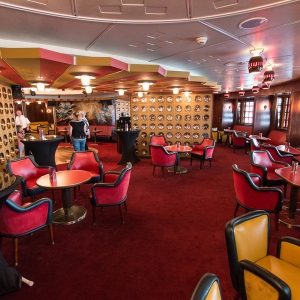 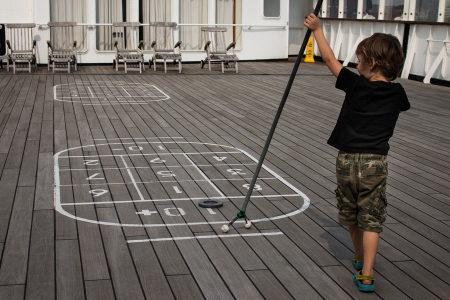 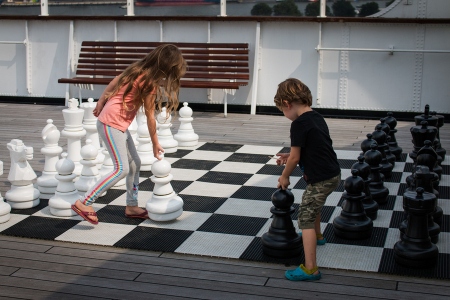 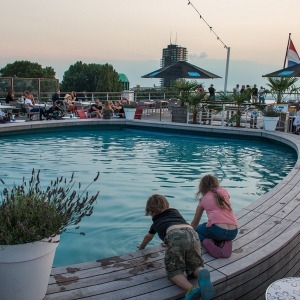 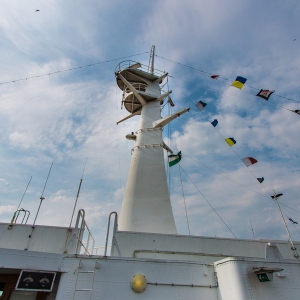 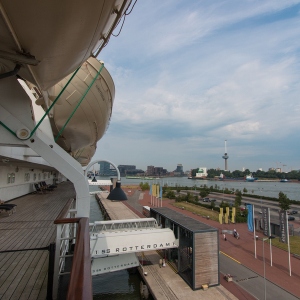 The ship operated during the years of the segregated social class system. Two sets of stairs allowed the first class to avoid mingling, heaven forbid, on a stairwell with the lower class.

In those early days a cruise would cost the yearly wage of a federal politician so the lower class did not travel often and it was quite an extravagant affair. Later they introduced lower fares and smaller rooms for immigrants heading to the US and those purchasers kept to the very lower decks, their own pools and restaurants.

I found it remarkable to hear the stories of when the walls finally came down and the classes started to blend.

Of course cruise liners never fully gave up the class system and to this day you still have those suites on the high decks for the big spenders and the level 2 decks with windowless cabins for the barely-middle-class folks.

A visit to the helm and Captain’s quarters was a highlight. The kids enjoyed turning the steering wheel and peeking through the telescope, although the staff member was a bit wary of their little wandering hands.

I wouldn’t label it a super kid friendly tour, but if your kids love boats then seeing so many diverse parts of this ship will sure to enthuse. 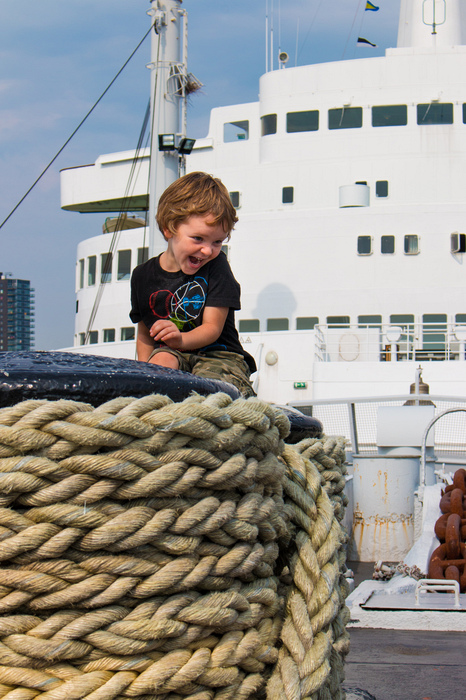