How We Slept in Our "Car" for Two Weeks

Home » Destinations » Northwest, USA » How We Slept in Our "Car" for Two Weeks
Share with friends Tweet Pin

After travelling New York to Florida on our East USA road trip, we were told several times that the Pacific North West was even prettier and we had to do it. Having never been camper vanning before we thought that would be a neat way to see all the natural beauty along the way. 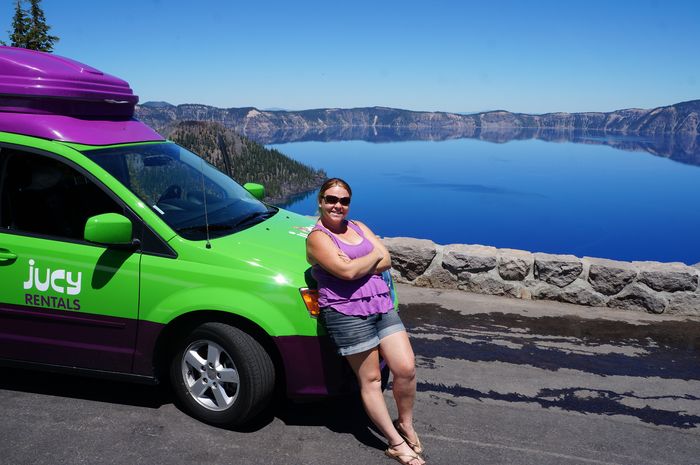 Jucy is a company well-known in New Zealand, and when we found out they also were located in San Francisco, we knew they would be the perfect solution. Their vehicles are not giant RV’s. Instead they had a minivan named Champ. Champ was a 7”4’ Dodge that seemed to include everything, including the kitchen sink. 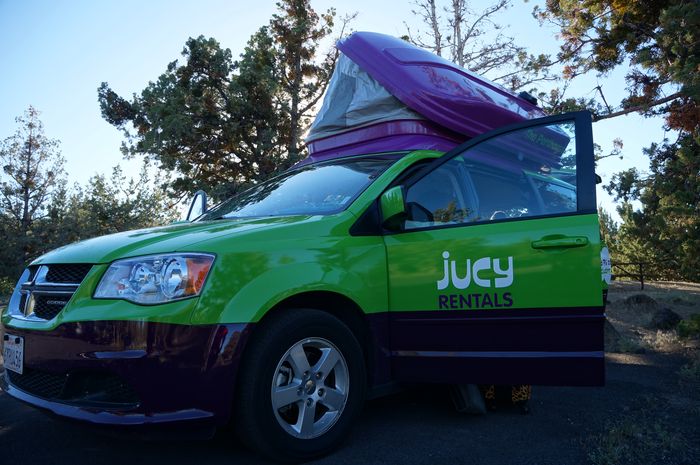 When you first see the car, you can never forget it. It has been the highlight of our trip across the West Coast as people frequently stopped to ask about it and see inside. Clad in neon green and eye-popping purple, it’s hard to miss, especially with the Jucy logo on it and the Lucy cartoon mascot. We almost felt like rock stars on tour travelling around in this vehicle. 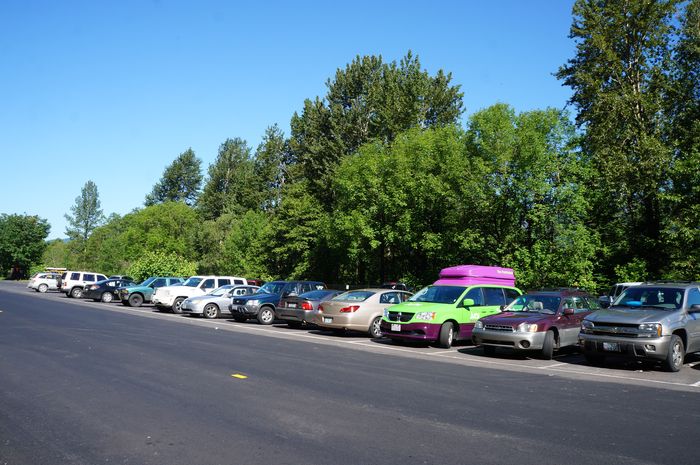 Setting Up Each Evening

The Jucy Campervan was surprisingly easy to set up. The electric pop-top opened up very easily by just holding 1 button. Once the bed was made we could leave it made and store the sheets and pillows up there when we were on the road. It’s also the longest bed my husband has ever slept in and he found so much joy in being able to stretch out the full length of the roof. My 3-year-old son slept with him on top, which was easily accessible via the retractable steel ladder.  The top sleeping area also contained 2 lights that were useful at night, as well as a small storage compartment, the perfect size for a torch, keys, wallet, etc.

Inside we pulled a chair back and, hey presto, it’s a bed. We moved our luggage to the front seat, made the bed and Mia and I were straight to sleep.

I must admit some discomfort on my first night. I have never been a camping queen and I had constant thoughts of someone coming to the car and waking at every sound. My husband slept like a log. 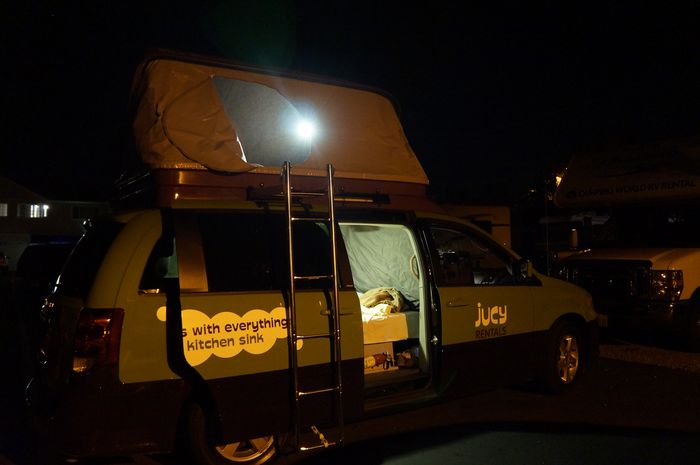 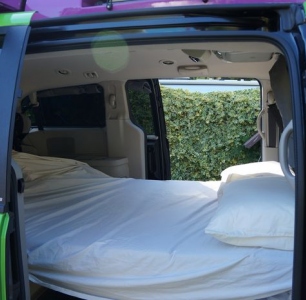 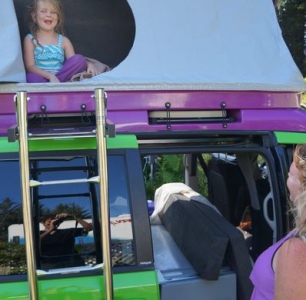 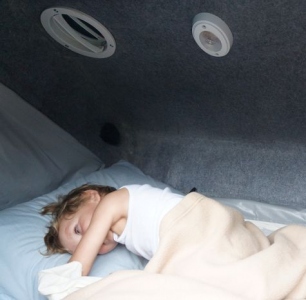 Let's start with the boot, it's got everything you need (accept a toilet). Inside the back is a kitchen sink, gas stove (plus spare), fridge drawer, cupboards with cookware, cutlery, plates, bowls and such. The fridge drawer was bigger than anticipated and fit our 2 litre milk plus yoghurts, canned fruit, water bottles, carrots, tomatoes and more. 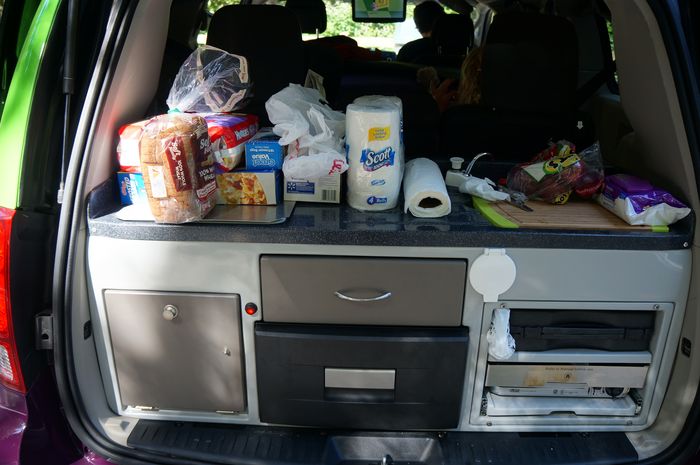 A collapsible table is stored on top of the car (below the pop-top) and is handy for cooking or sitting outdoors (great laptop table). 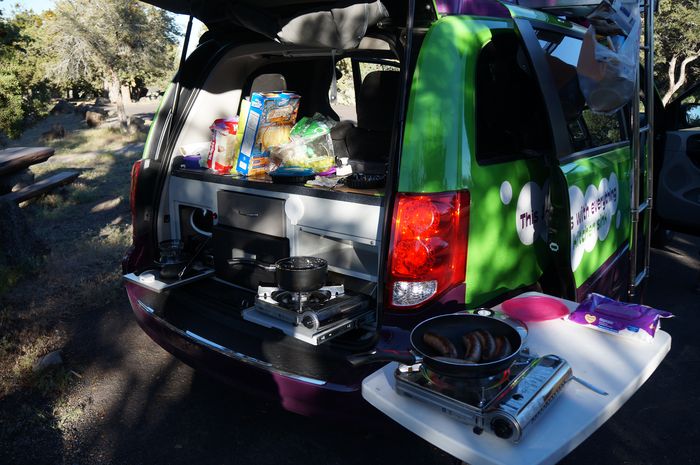 Inside the van was a storage box that converted into a bed. Inside this storage box (alongside our 2 carryon bags and some other items) was a table. This table could be taken out, stuck in a hole in the van, making the chairs the seats and a neat breakfast nook. 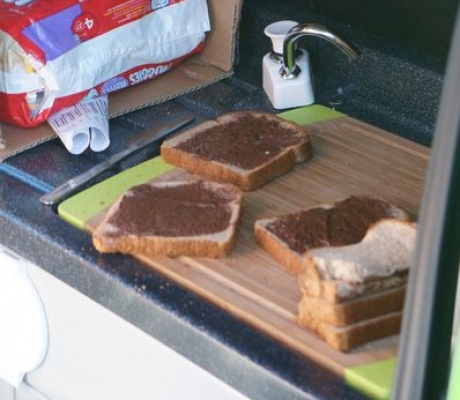 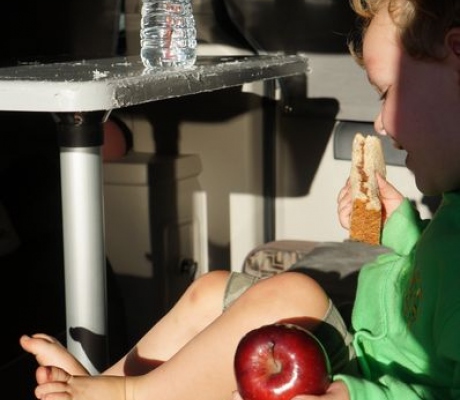 Mia’s favourite feature was the electric side doors which could be opened with the press of a button, and even controlled from the front seat. As we popped in and out of the car very frequently, it turned to be more helpful than we had initially anticipated.

The pull-down DVD player with remote control is a convenient way to keep the kids amused in the back seat on the longer drives.

All in all, this Champ is one fine camper. It gave us so much more flexibility then a massive RV as we can stop in at restaurants, supermarkets, delis and attractions with no worries about parking (except the height, most shorter drivethrus didn’t quite fit). I could drive it through cities like San Francisco and Seattle without any fear of hitting anything or anyone. And my favourite, it was pretty good on fuel. 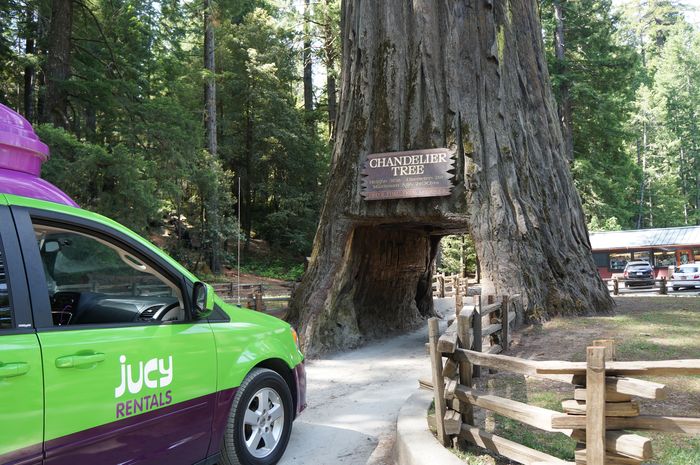 If you are planning a short road trip or family holiday, take a look at the Jucy Champ videos to see it in action – very impressive. 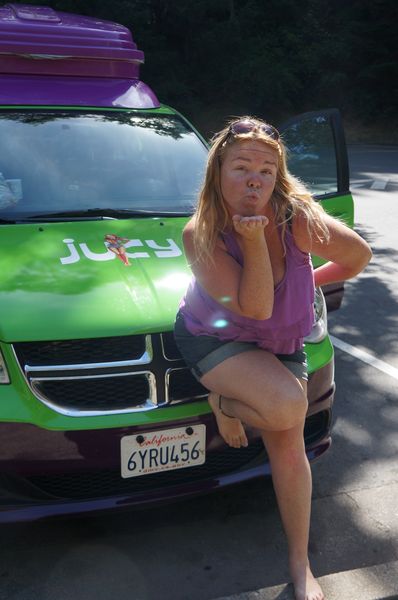 Check out where our Jucy Champ went in the photos below or read our Pacific North West Road Trip Posts! 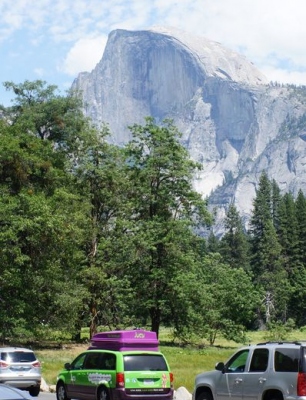 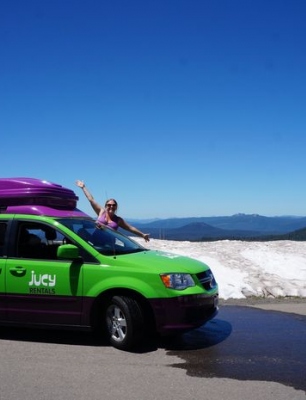 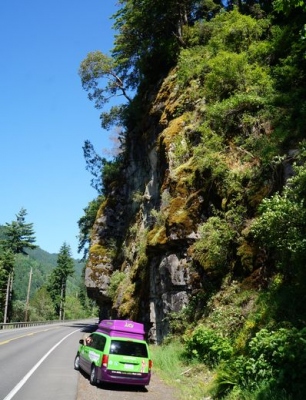 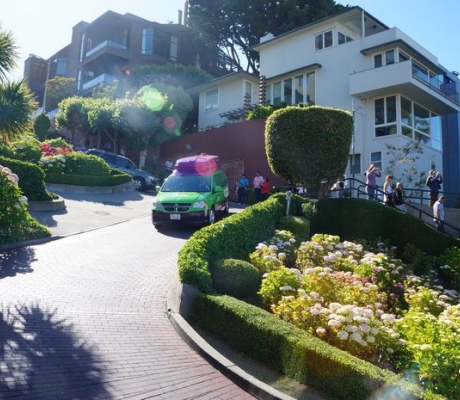 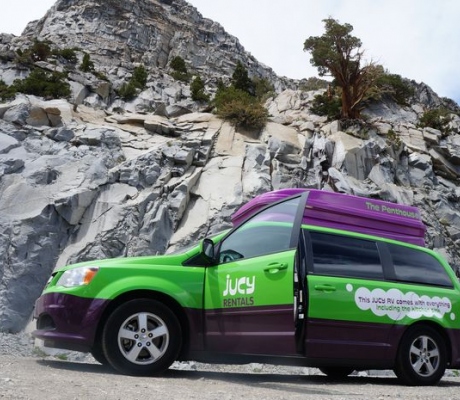 "I respond to every comment by private email. So please leave me comments, I love chatting to you" - Josh Bender
Posted by Shelly Rivoli on Jun 28th, 2013
OMG! This is fabulous (looks much more fun than the traditional 70s VW!)! What great news they are in the Bay Area, too! Thanks so much for sharing ;-)
Posted by Patti on Jun 28th, 2013
We've seen a few of these on our travels - good to know it works - great concept.
Posted by Eileen, The Super tourists on Jun 28th, 2013
Ooooooohmyyyyygooood!

I want one, now!
I love everything about it!
It's like I could use this as an excuse to go to the Bay Area. Wonder what it would be like to go all around the Midwest with this thing. If only it would be available to get dropped off after a linear plan like San Fran to Denver or something. Anyway, it's still awesome.

Tha k you for providing so many wonderful photos :)

Eileen
Posted by Teresa @TTsTrippin on Jun 29th, 2013
Agree with Eileen--I want one, NOW!!!! I must go research and see if they are available to purchase anywhere in the US. If not, for sure on my next trip to San Fran I will be renting this puppy and taking her around that gorgeous part of our country! I have tent camped, then moved up to a pop up camper (my favorite) and a Travel Trailer. THIS is my new favorite and looks like the perfect mix of everything I love to take Hubby and I (and the Grandkids) into the future :-)
Posted by Coral Musgrave on Apr 4th, 2014
We hired a camper in NZ for 2 weeks and hated it. Love NZ just hated the 'Transit Van with a bed in the Back' as it came to be known. Too big for the windy roads and a fortune to fill with fuel. And so little space for such a big van. We got camper van envy when we saw the Jucy vans. If we ever geta camper again, it will be Jucy all the way. The campsites in NZ are so well equipped with excellent kitchens, super clean shower and toilet blocks, you only need a van like this.
Posted by Linda on Apr 4th, 2014
Hi there,
We have recently travelled around Tasmania and we were slightly tempted at the camper van option. However, it just seemed too much to drive around. This particular vehicle is compact enough to accommodate our family and looks practical to serve our purposes.
Thank you for the photos and for sharing! We will definitely keep this in mind when we travel to NZ!
Kind regards,
Linda
Posted by Cassie on Apr 18th, 2015
Nice, the Jucy campervan fit inside the Chandelier Tree? If so, that's awesome! You certainly can't do that with a big RV.

I appreciate your story and photos, I'm doing a Jucy roadtrip from the Bay Area up to Central Oregon next weekend and we have so many questions about what the van is like!