Christmas Eve in Bethlehem: Everything You Need To Know For This Once In A Lifetime Experience

By Josh Bender
Home » Destinations » Palestinian Territories » Christmas Eve in Bethlehem: Everything You Need To Know For This Once In A Lifetime Experience
Share with friends Tweet Pin

There are some things in life that just sound right. Peanut butter and jelly. Sunlounge and cocktails. Christmas and Bethlehem.  And who could resist celebrating Christmas Eve where it all began some 2000 years ago. A small, unassuming town where a baby was born in an animal feeding trough that is still revered and celebrated today. The sacred location at the very foundation of Christianity. There’s nowhere else that comes close to being as Christmassy as this. 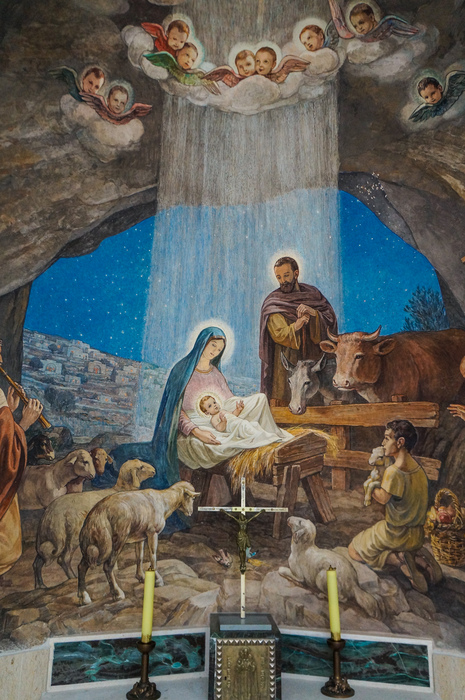 Fresco of Jesus’ birth in the chapel at The Shepherd’s Field in Bethlehem.

In December 2013 I took a solo trip to Israel to visit family. And while there, Christmas came around. It might be surprising for Westerners, but Christmas isn’t a particular big deal in the Holy Land, especially compared to countries like Germany, UK, USA and Australia. It’s largely a non-event here since the majority of the population is Jewish, Muslim or Secular. Sure, there are religious pilgrimages but if you visited the shopping mall or walked down the street you wouldn’t see many decorations and ornaments. 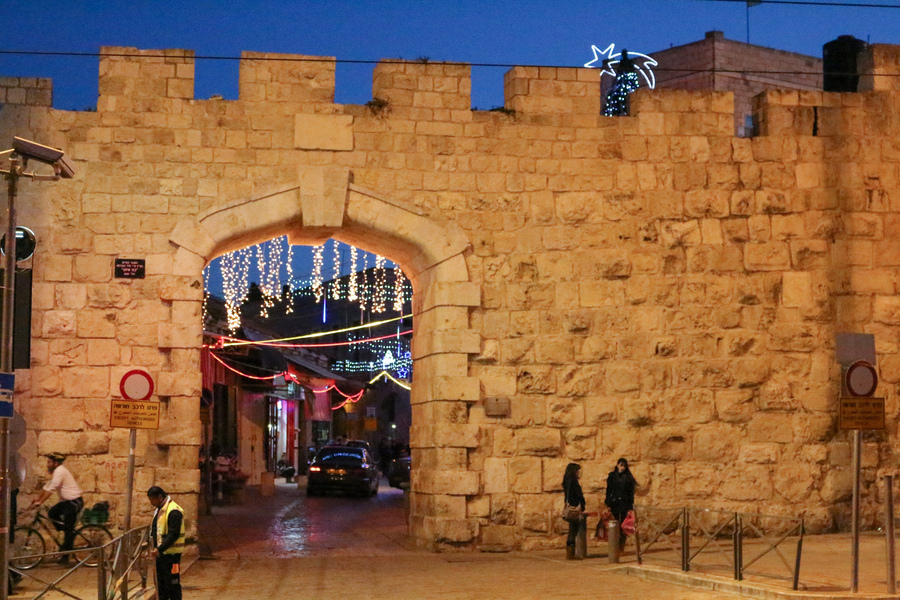 Our good friends, Oren and Cassie from 42nd Class, were in Israel at the same time so we caught up and headed to Jerusalem for a few days. I stayed at Abraham Hostel again. This was my first solo trip since my kids were born so the new experience of living out of a backpack took a little getting used to. It meant luggage was much lighter and I could cram a lot more into each day. Logistically things were easier, but I missed their smiles, and joy they brought every day. Oh, and I missed Erin too! :) I wrote more about the experience at the time.

Abraham Tours were running a special Bethlehem tour just for Christmas Eve. It covered some of the places we visited on our tour with them previously, plus included dinner in Manger Square in Bethlehem. Tickets were 305 NIS (about US$75). Unfortunately the tour was already full by the time I enquired so I researched a few alternative options and found a winner.

Getting From Jerusalem To Bethlehem

You can get to Bethlehem by less popular methods such as walking (3+ hours) or riding a bike (1+ hour). But these aren’t particular conducive to a memorable Christmas Eve (at least in a good way). Keep in mind December in Israel can get pretty chilly. 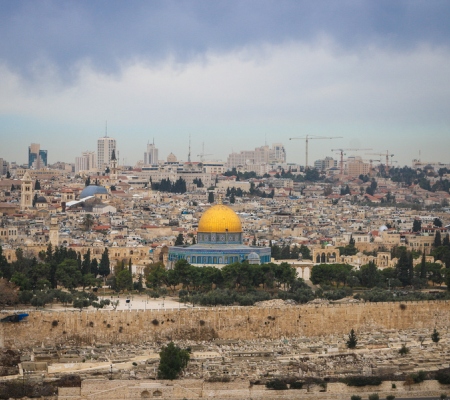 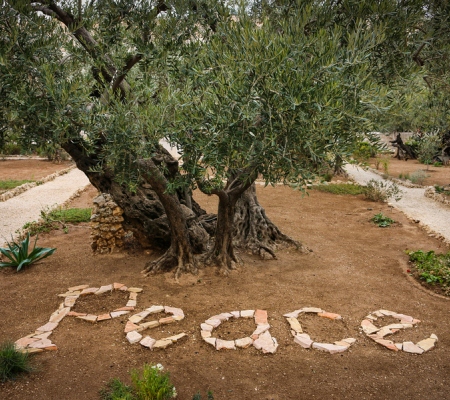 I chose the public bus which cost 7.30 NIS (about US$2). Bargain! Bus 21 left from the Arab bus station near the Damascus Gate of Jerusalem’s Old City. It was surprisingly easy to find - refer to this Google Map:

Typically buses run from 6am to 7pm, but around Christmas they operate extended hours. On Christmas Eve 2013, they were running until 9pm. There’s no formal schedule, but the buses depart regularly. I only waited about 10 minutes. The whole trip typically takes 30 minutes, but can be up to 45 minutes depending on the number of stops and traffic. Bus 21 took passengers through the border crossing with the final stop about 1 kilometre from Manger Square (Bab Zkaq intersection on the Jerusalem–Bethlehem road).

Alternatively, Bus 24 will take you to the border checkpoint (costs 5.50 NIS), and then you have to catch a local taxi to the centre of town (about 25 NIS) or walk (3km).

You should bring your passport, however mine wasn’t checked on the way in or out. Locals tell me this is quite unusual, but perhaps security procedures were more relaxed to accommodate the 10,000+ international visitors for Christmas Eve. Israeli security officers are more thorough when leaving Palestinian territory, but it can vary depending on the specific border crossing. 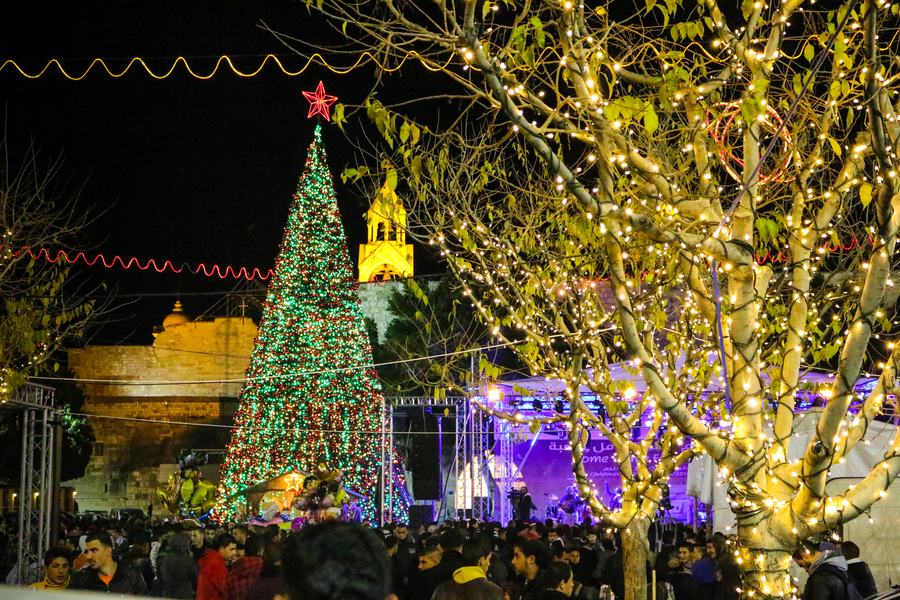 On Christmas Eve there were several road closures to accommodate the special events around Manger Square and I had the option to walk the rest of the way or find a taxi. I opted for the taxi which cost around 15 NIS (US$4). Just make sure you agree on a fixed price in advance. It would typically be cheaper other times of the year.

If you’re thinking of driving to Bethlehem, then check with your car hire company they allow the car to be taken into the West Bank (most Israeli hire companies won’t allow it). However, if you find a car in East Jerusalem then it’s likely you’ll be ok. But as far as budget and convenience, the bus was the best option.

There are Christmas religious celebrations at all times of the day in Bethlehem. Check out the official Bethlehem Visitors Information Centre website for more up-to-date info. I left Jerusalem around 6pm and had plans to stay for the midnight mass. However, I ended up returning early around 11pm. But if you have time, I’d recommend that you spend the afternoon there and take in some of the other sites like: Shepherd’s Fields, Milk Grotto and Church of the Nativity. 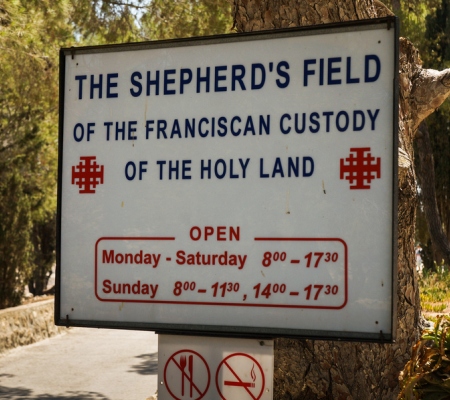 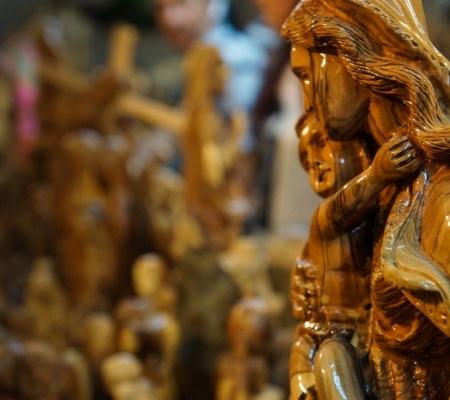 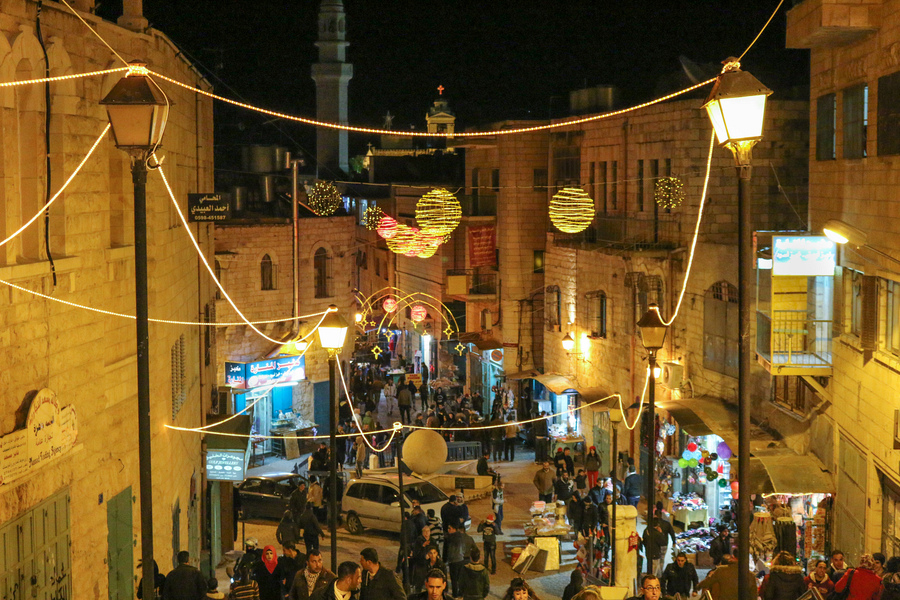 Strolling the backstreets of Bethlehem to stay warm.

When I arrived at Manger Square I was expecting to be able to get into Church of the Nativity, but it was off-limits to visitors. It turned out that the Palestinian President, Mahmoud Abbas, was attending the Christmas Eve midnight mass in the Church along with senior officials and foreign dignitaries. Soldiers had locked down the entire city since mid afternoon so many of the popular tourists sites were not accessible. There was no prior warning for apparent security reasons, so I just rolled with it and hung out in Manger Square in front of the church where a concert was being held. 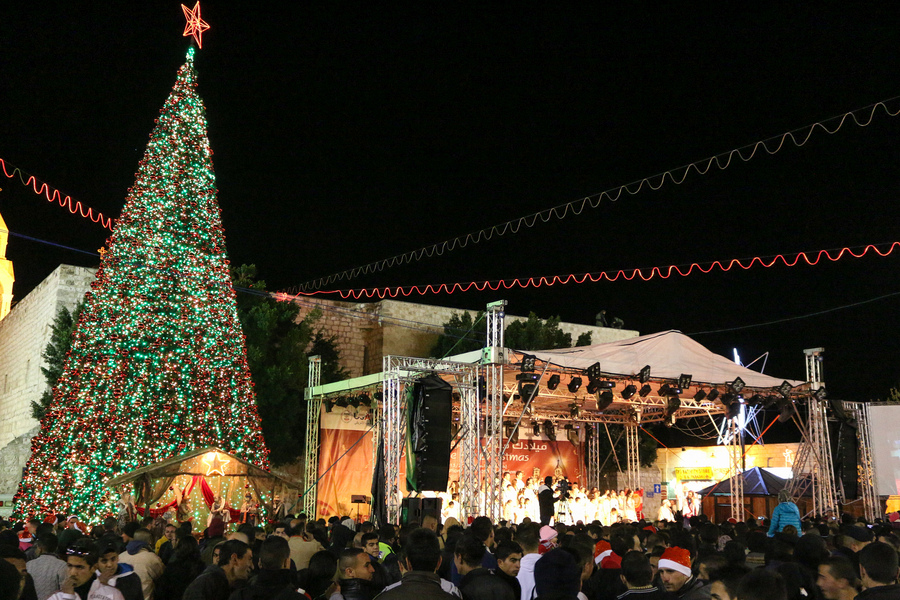 Children singing Christmas carols is always cute, and there were acts from all over the world bringing the Christmas cheer. And best of all, the concert was free! I’ve been to many musical performances all over the world, and while I won’t say the quality of the performance was anything to rave about, the location and atmosphere was unbeatable. Oh, and did I mention it was free? 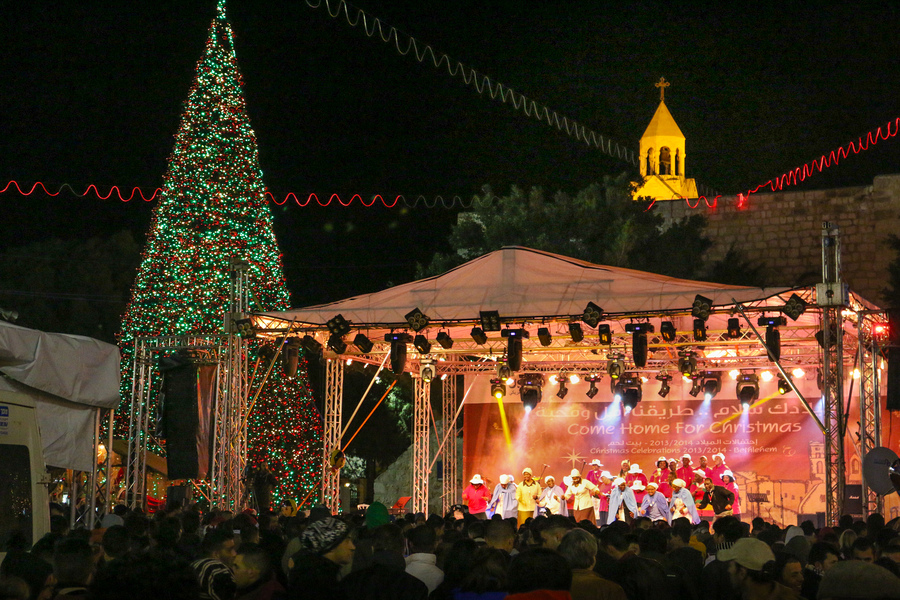 Here’s a video created by Oren who does a great job describing what Christmas in Bethlehem is like (keep an eye out for 1:08 where I made a quick appearance). 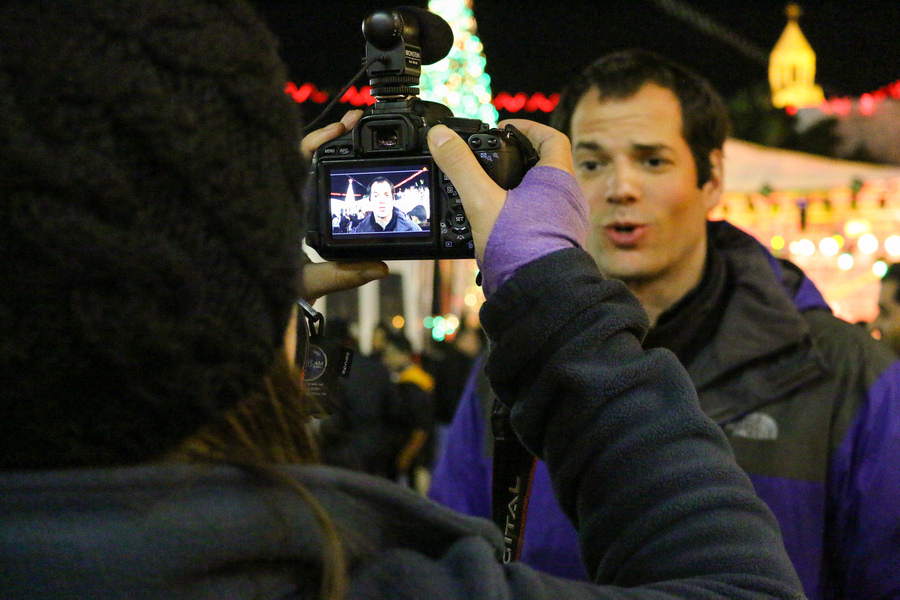 Behind the scenes of that video.

One thing I underestimated was the weather. Although it was a clear night, the temperature dropped to around 6°C during the night (that's 42°F). I was wearing a jacket with a t-shirt underneath and I was freezing. So bring a few layers of clothing, including a super-warm jumper. I spent a lot of the night slinking from one heated souvenir shop to another. 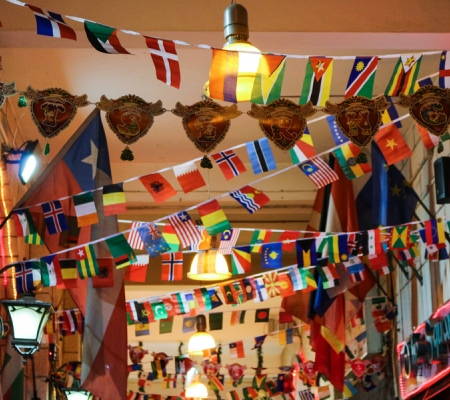 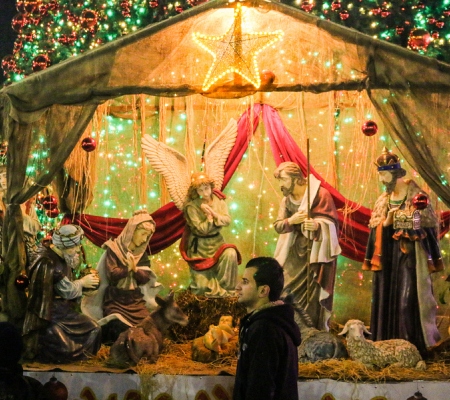 There were food vendors scattered around the concert area, and a line of restaurants on the southern end of the square. I enjoyed a traditional meal which set me back around US$15. This included an entre, main course, drink and dessert. Pretty reasonable considering it was so busy.