My Kids Running With The Bulls In Pamplona, Spain

After a frightful morning in France when the police towed my car we were finally heading towards Spain.

It was late September when we rolled into Pamplona (check hotel prices…). We had no intention of running with bulls in July, but we did want to see where all the action took place and what we stumbled onto was much more fun than we could have hoped for.

Pamplona is the historical capital of Navarre and is located in a rounded valley. It’s about 735km (457 miles) from Paris and 407km (253 miles) from Madrid. Thankfully it was only a day trip from our previous destination - Toulouse, France.

Pamplona is most famous for the annual San Fermin festival held in July, which includes the iconic running of the bulls.

San Fermin used to be held in September. I guess the weather was better in July so they changed the festival dates.

However on the original dates you can still attend San Fermin Chiquito or the Basque spelling San Fermin Txikito.

Quite by chance we stumbled upon this small festival that is held every year around 25th September. It commemorates the martyrdom of the saint in Amiens, France. It runs for roughly four days and is well suited for families with children, but of course everyone is invited. 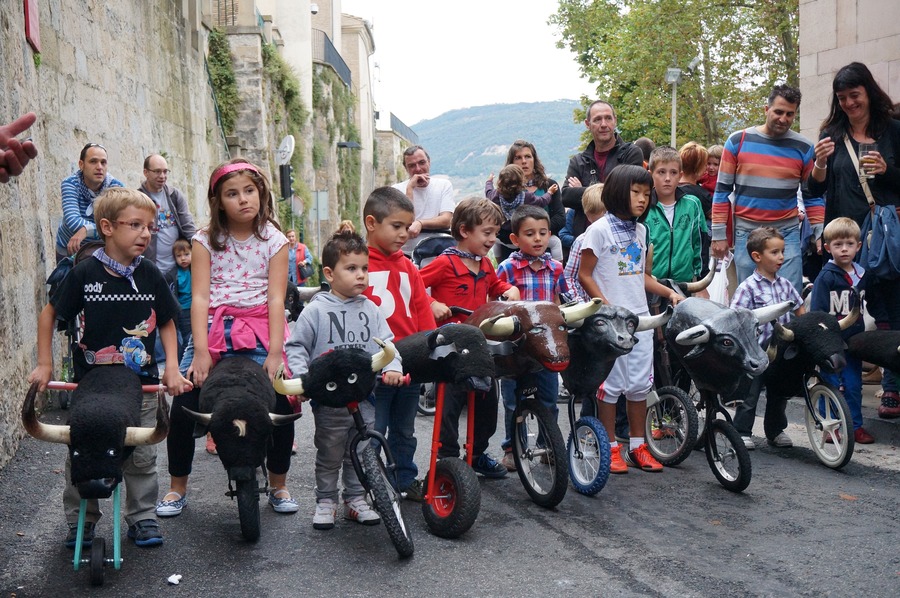 Running Of The Bulls Festival

Parking was a mission and as we walked up the cobbled streets of this gorgeous Spanish town we noticed a swelling crowd. We found refuge on the side of the road as children gleefully started filling the alley like a torrential river. 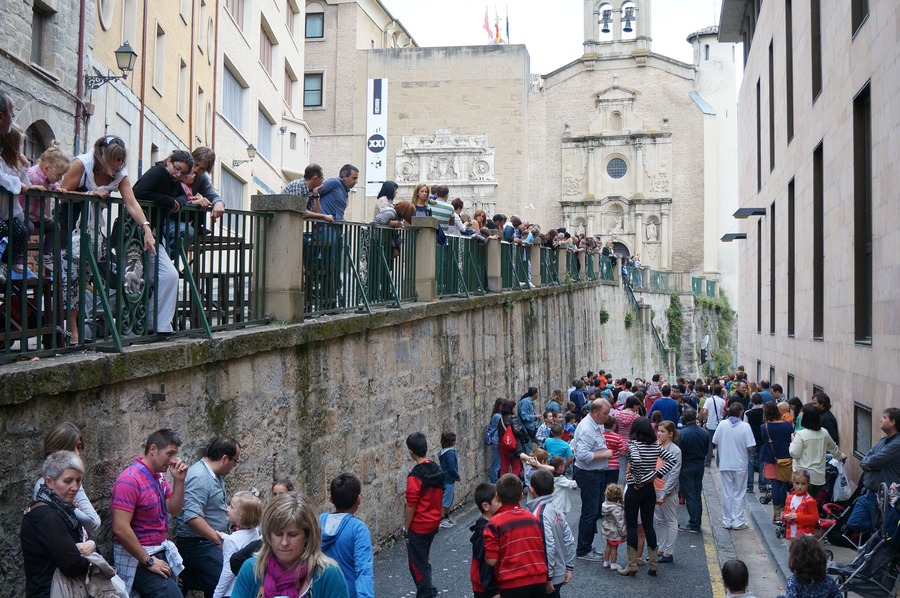 Children dressed in red and white lined up alongside children rolling bull heads like wheelbarrows. We had stumbled on nothing other then our very own family friendly “running of the bulls.” 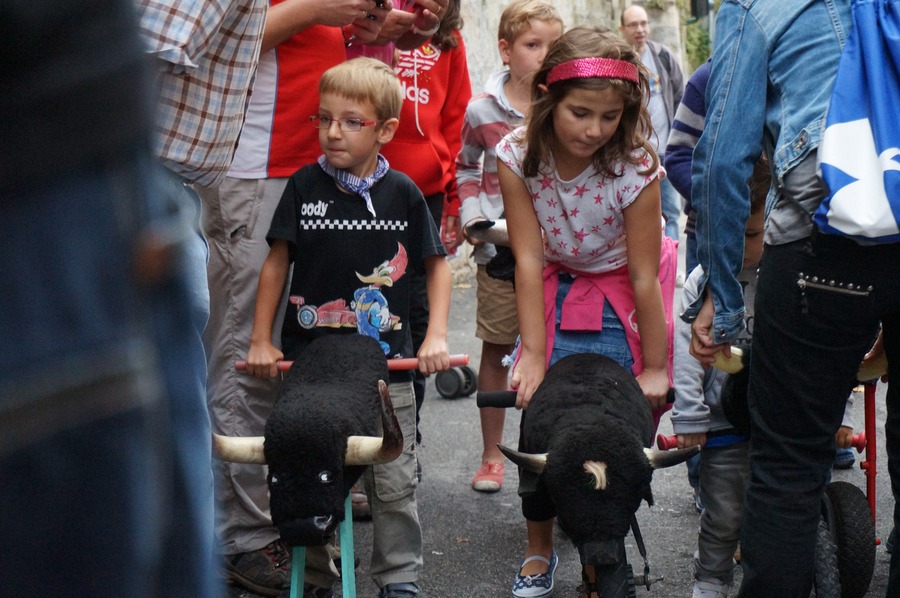 We watched from a safe elevated path as the fanfare and bells and screaming escalated into a momentous thrust of energy. The “bulls” were released! Children and parents ran through the streets screaming and hollering, while wheelbarrow bulls and costumed men gave chase. It was so cute! 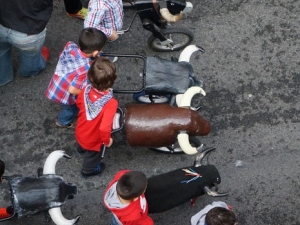 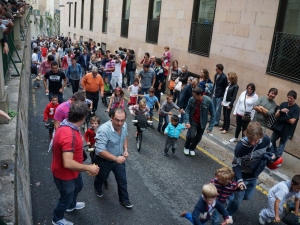 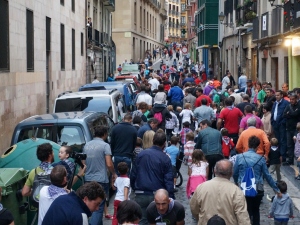 Once the crowd had subsided we walked down into the alley and joined in the fun. I was the bull and my kids ran like the clappers. The atmosphere was intoxicating and it didn’t even matter that we weren’t watching real bulls. We were taking part in a world-famous centuries-old festival. All quite by accident. 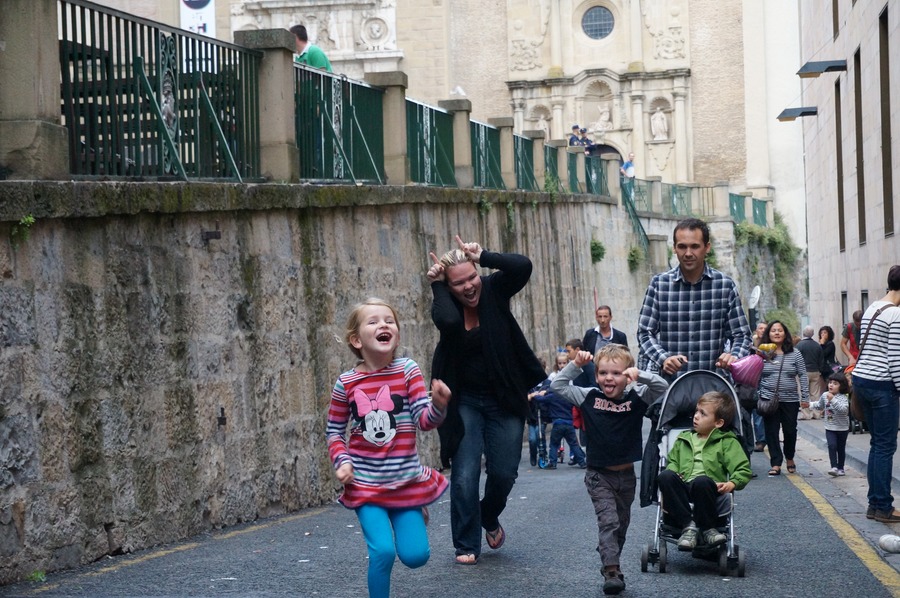 Check out our video:

As we reached the top of the alley and into the middle of town we spotted the Giants and Big-Heads parade, much like the grown-up version of this festival. 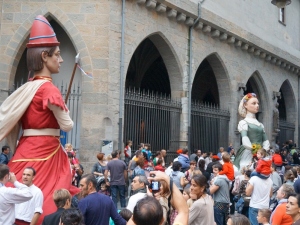 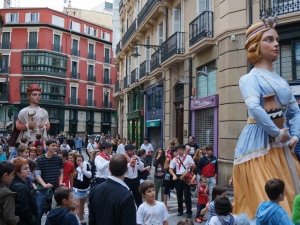 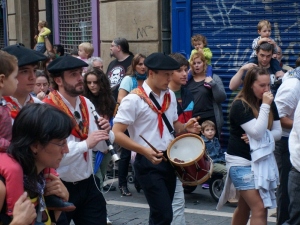 The parade of gigantes y cabezudos (in English giants and big-heads) features giant figures that walk the streets as you might expect. You will usually find around 8 figures which represent four kings and queens of 4 difference races and places (Europe, Asia, America and Africa). They stand at almost 4 metres in height, each carried by a dancer inside a wooden structure. Following the rhythm of traditional music, the dancing giants following bopped along. The atmosphere was electric. 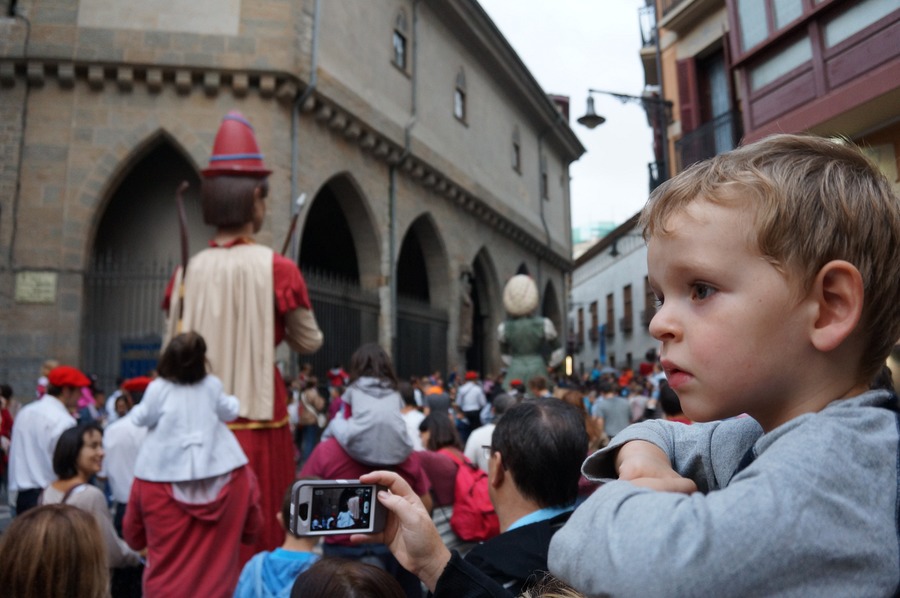 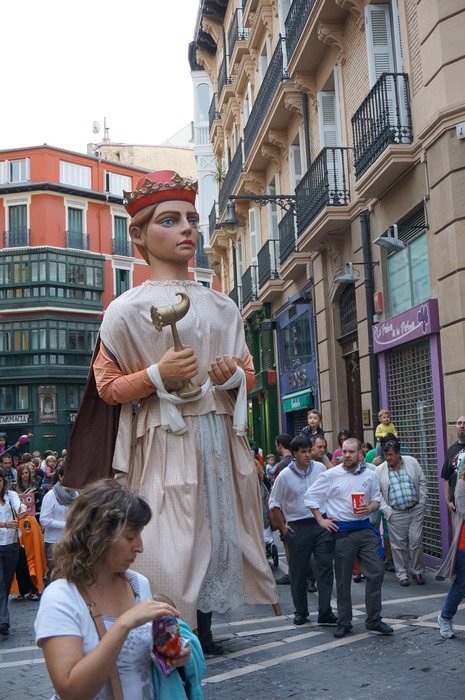 There were many other characters lurking about, some giants, others just giant heads worn as helmets on human bodies. Once the parade was over the crowds contracted and we could easily make our way around town.

The Rest Of Pamplona

During our unplanned, no-destination-in-mind wander around Pamplona we meandered past the Cathedral de Santa Maria La Real, which housed a giant baby head sculpture outside it’s front doors. 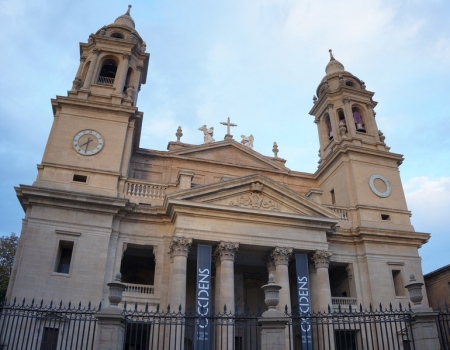 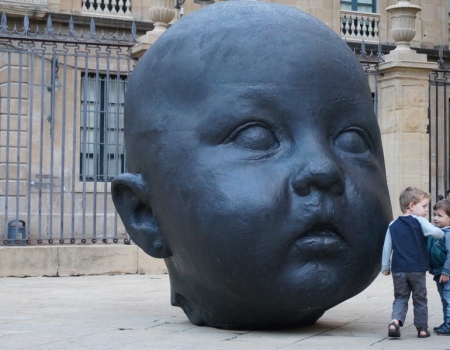 We stopped at a few restaurants to soak up the scent of fresh tapas before choosing on a little hole-in-the-wall for dinner.

Music and laughter followed us around the whole evening as people celebrated in the streets and loitered in the pubs.

It was an exciting day. One that was completely unplanned and totally worked in our favour. I love random travel moments like that. And now I’ll always remember that my kids got to run with the bulls in Pamplona.

While in Pamplona we stayed in Hotel Avienda. But there are quite a few other affordable hotels in the area. 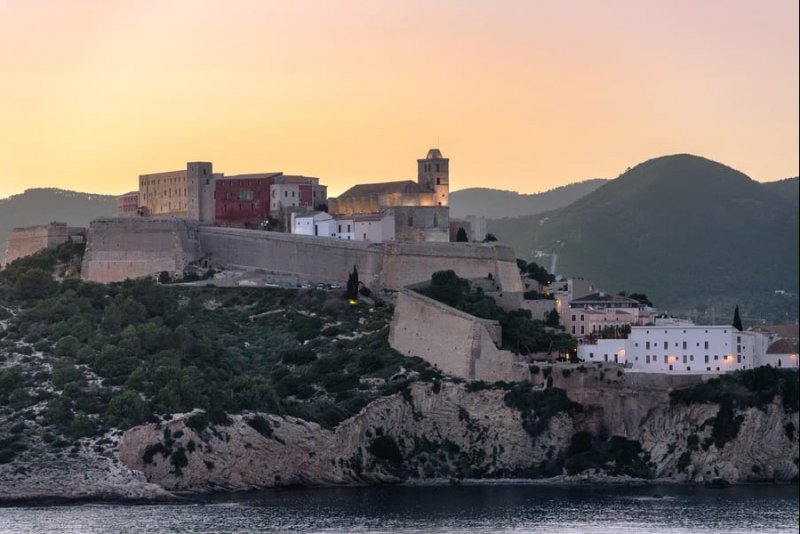 There’s so much to see and do in Spain, and so little time. When we planned our trip in 2019, we didn’t know where to start. We wanted it all… beaches, food, sunshine, culture, and… 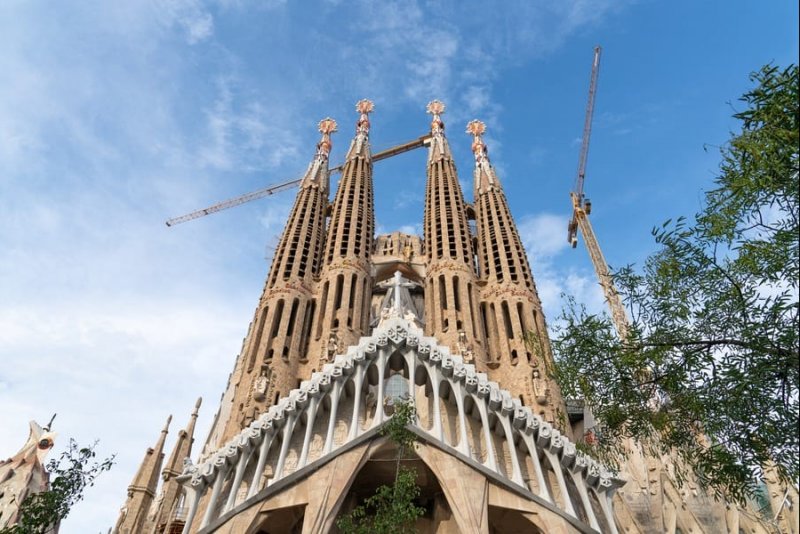 Barcelona is city driven by passion. It’s the city to fall in love with all things Spanish, from delicious rice dish paella and the fruity cocktail Sangria, to Flamenco dancing and… 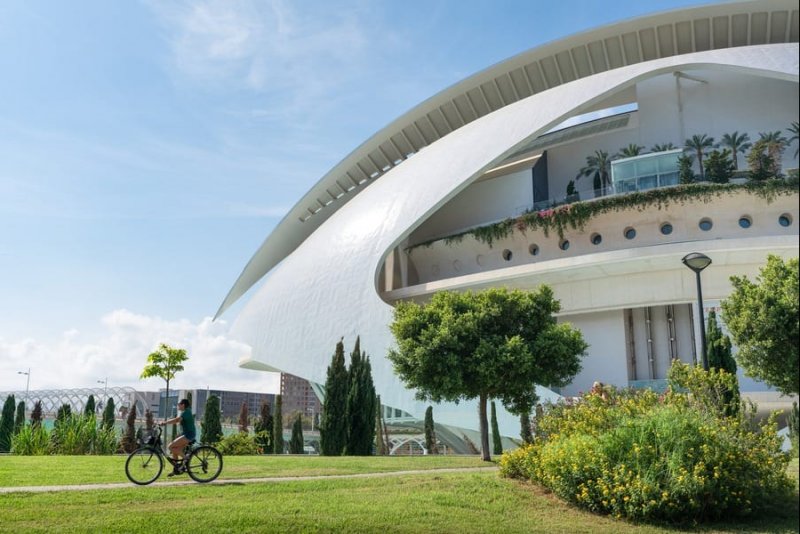 17 Best Things To Do in Valencia, Spain: Museums, Beaches, Food & Wine, Culture, City of Arts and Sciences, and Discount Tickets 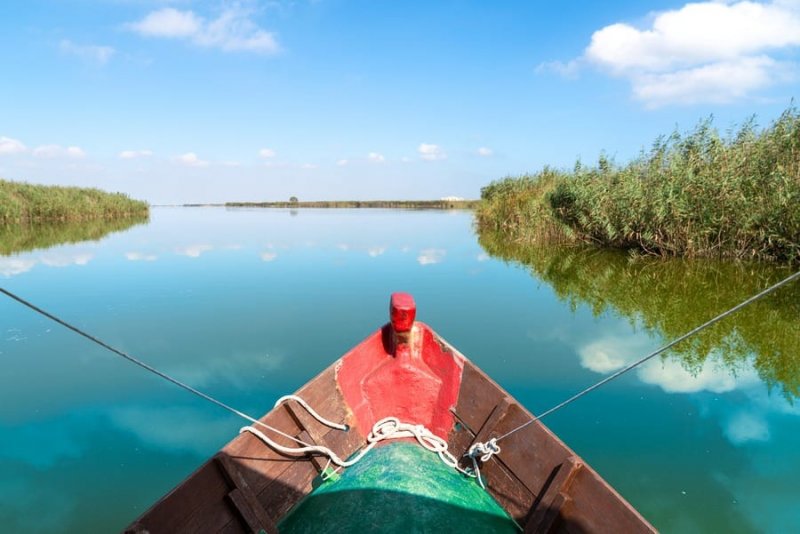 With the help of a few knowledgeable tour guides, I sampled Valencia’s best wine and paella; shopped for authentic, locally made souvenirs; and delved into the city’s motley… 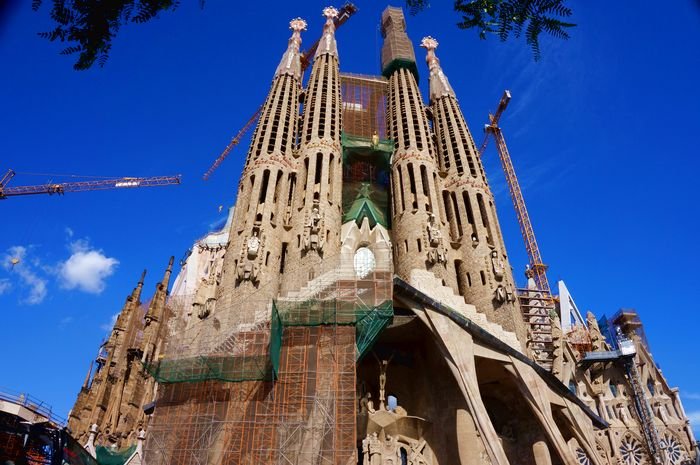 Cram It: 48 Hours In Barcelona, Spain

15 days had passed since we disembarked our cruise ship in Civitavecchia but it felt like months. We had seen so much in such a short period of time on our Southern Europe road… 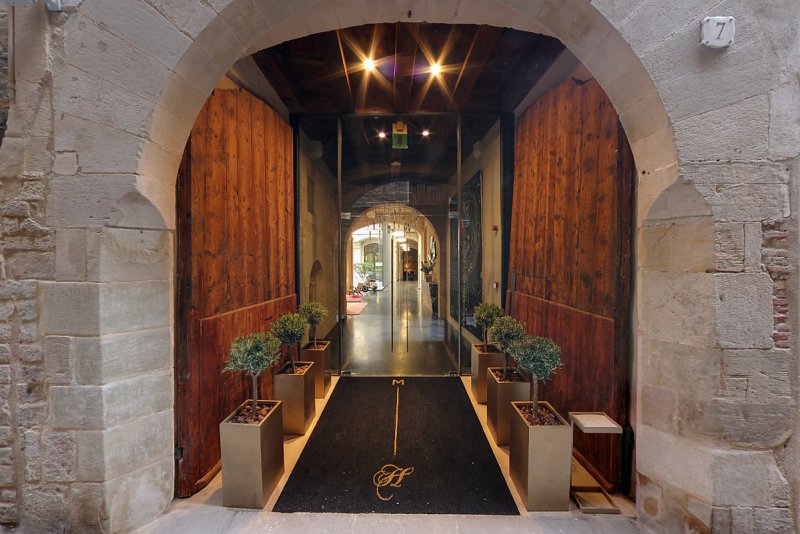 Hidden in the Gothic walls of the ancient city a bellman rushed to our aid welcoming us to the Mercer Hotel Barcelona. The Mercer Hotel is a 5 star luxury indulgence. The building…

It's great for more people to see the festival of San Fermin is not just about the bull run. It's a fun fiesta with so many other fun things to do. I stayed with Stoke Travel and basically just partied with them the whole at their campsite with pool parties, dancing to bands and DJs every night, watching the fireworks from Pamplona. And the opening ceremony was so fun!

This is one festival we have yet to do, after nearly 6 years in Spain. I love all of the Spanish festivals and when our kids were younger we took them to La Tomatina. Not sure that was the best idea, but we had fun with it. love to see the kids on their bull bikes.