15 Things To Do In Bangkok With Teens

“Hmmm… where should we go on vacation with teenagers?”

I’m guessing Bangkok was probably not the first destination that came to mind, right?

Thailand’s capital is famed for drawing sleazy, overweight old men to its narrow, neon-lit streets lined with go-go bars and nightclubs. If you’re like me, that’s not something you’d want to encumber on impressionable (and somewhat innocent) teenagers.

There’s no doubt that notorious element is present if you go looking for it. But when you go beyond the clichés, Bangkok really is colourful mega-metropolis bursting with fun for teens.

Just over 1 year ago, I had a ball with my teenage niece and nephew in Bali, so I decided to take them on vacation again, this time to Thailand starting in Bangkok. We spent hours in multi-level shopping malls finding activities that didn’t break the bank, explored historic Buddhist temples, watched a Muay Thai match, and stuffed our faces with more street food than you can imagine!... all out of the goodness of our hearts, so we could bring you this list of 15 top things to do in Bangkok with teens.

I know. A real sacrifice. 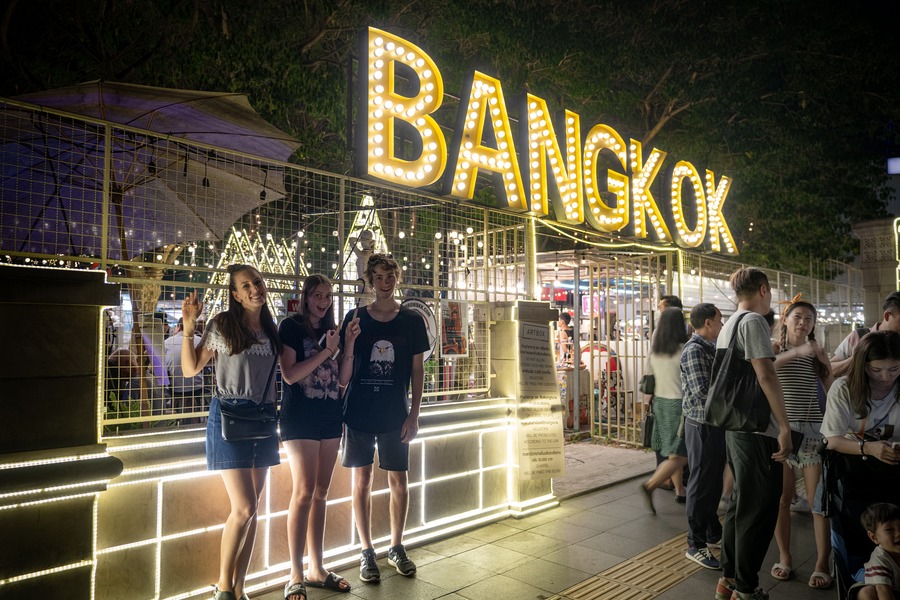 BKK is the place to be!

1. Get to know Bangkok on a city walking tour

To introduce my niece (15) and nephew (16) to Thai history and culture, I booked Withlocals’ Best of Bangkok: Highlights and Hidden Gems 4-hour walking tour. Like all Withlocals tours, I got to choose my favourite guide when booking (couldn’t go past Chatchai) and the tour was private – just us and Chatchai, so there was plenty of one-on-one attention and time to ask questions.

Chatchai started with a quick rundown on the history of Thailand explaining the role of the Thai monarchy and how Bangkok came to be the nation’s capital. At our first stop, the Pak Khlong Flower Market, he delved into Thailand’s Buddhist religion, showing examples of ornate hand-made floral offerings to thank guardian spirits. The thousands of orchids and marigolds sent waves of sweet fragrance wafting throughout the modest market. 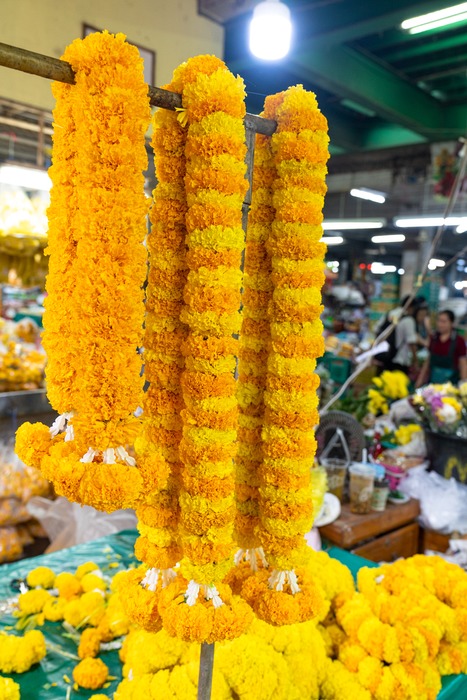 Next, we caught a quick ferry across the Chao Phraya River to visit a shrine and 2 Buddhist temples where Chatchai explained the differences between Chinese and Thai Buddhism and taught us how to pray in front of a 30-foot golden Buddha statue. I was very impressed with how well Chatchai educated my niece and nephew about his religion and culture. Impressively, a week later, they remembered specific details like meanings behind different postures of Buddha statues. It all goes in! 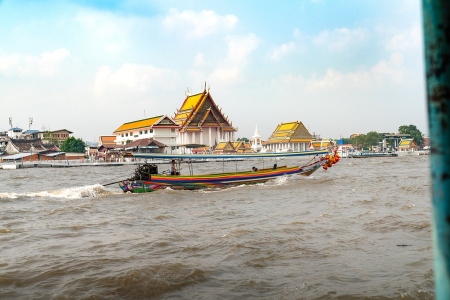 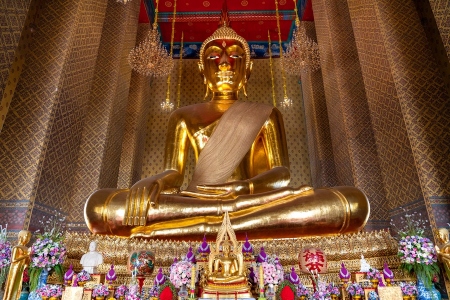 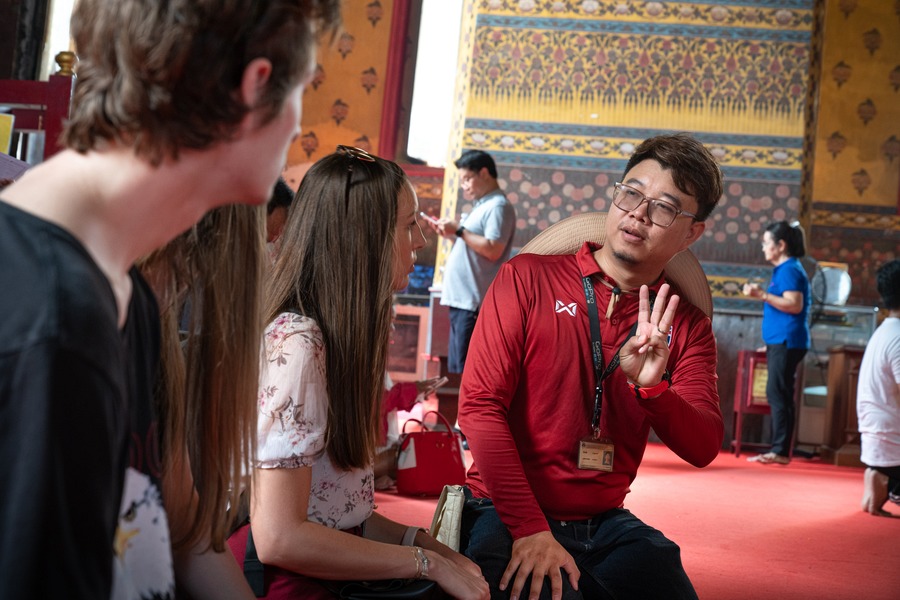 To finish off, Chatchai hailed a couple of tuk-tuks to whiz us over to Wat Arun where he explained the legend of Ramayana, depicted on the towering stupa, and led us through the iconic temple’s intricate rooftops. 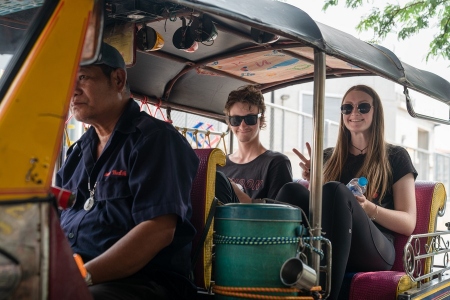 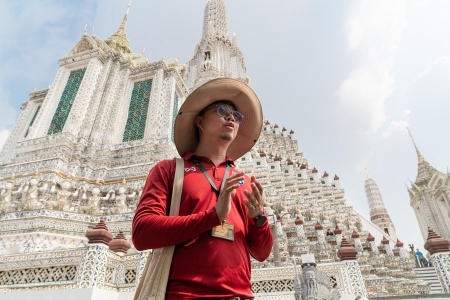 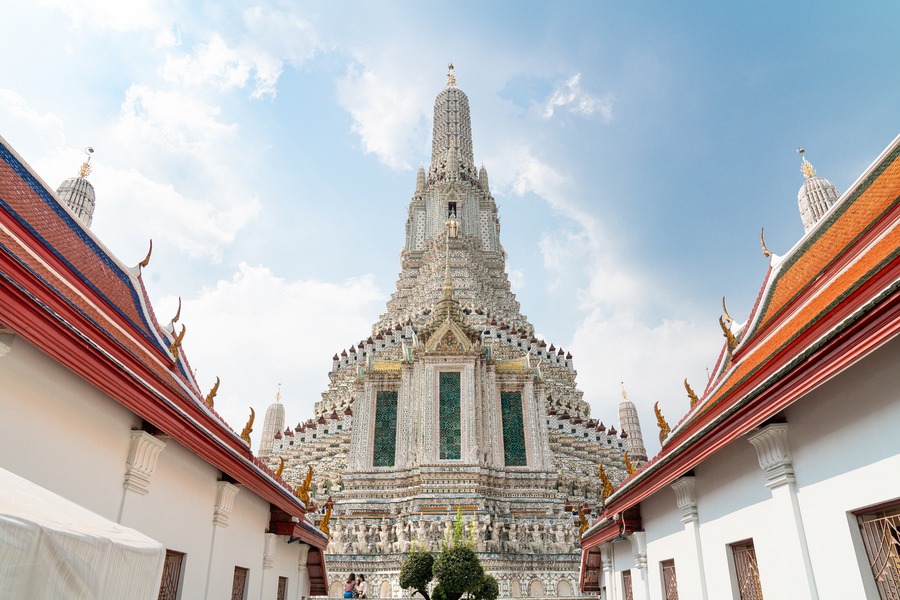 2. Fill up on street food

For teens that had never tried Thai food before, I chose mid-range dining options like local, street-front restaurants and food courts. I couldn’t convince my niece and nephew to nibble on a scorpion, but we did gorge on classic Thai dishes like phad thai and green curry. A meal for 4 people at a mid-range food court (e.g. Pier 21 Food Court inside Terminal 21 mall) costs a whopping AU$13 (including water). Your hip pocket will like that. 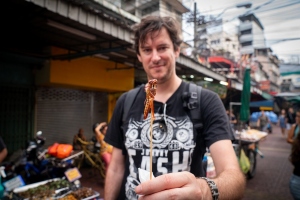 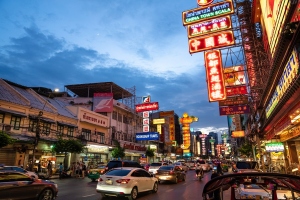 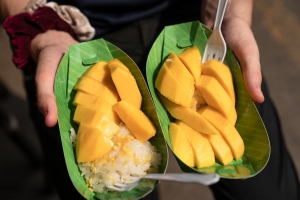 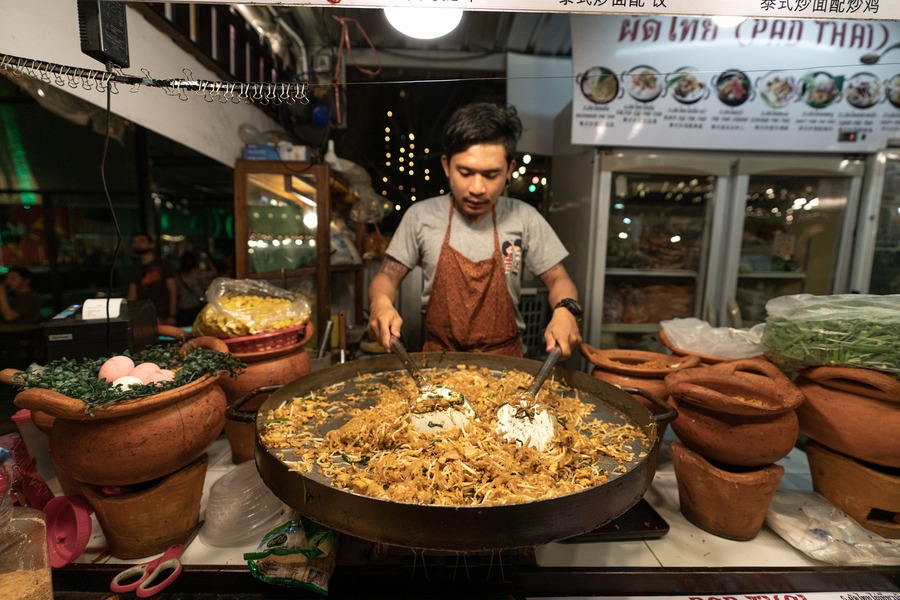 By observing Thai locals on the street, you’d think they’re among the kindest, calmest, and quietest people on earth, and they are. Unless they’re gambling over a Muay Thai match. I wanted to take my teenage niece and nephew to one of these vibrant boxing matches, but I also wanted them to understand what was going on, so booked a Muay Thai Fights Experience with a Local Expert through Withlocals.

Our guide, Tom, led us to Channel 7 Boxing Stadium to watch 4 matches of semi-professional Muay Thai. The weekly event is televised and viewed by about 35,000 locals on-air plus 500 live spectators. To secure our ringside VIP seats, we had to arrive an hour early. While we were waiting, Tom shared tips on how to spot a good fighter and explained Muay Thai rules and the hand signals local spectators use to place bets. According to Tom, we attended a good match as the fighters didn’t mess around, getting straight into the action and pulling out rare and difficult moves. With every punch, kick, and knee to the ribs, the crowd roared in unison. 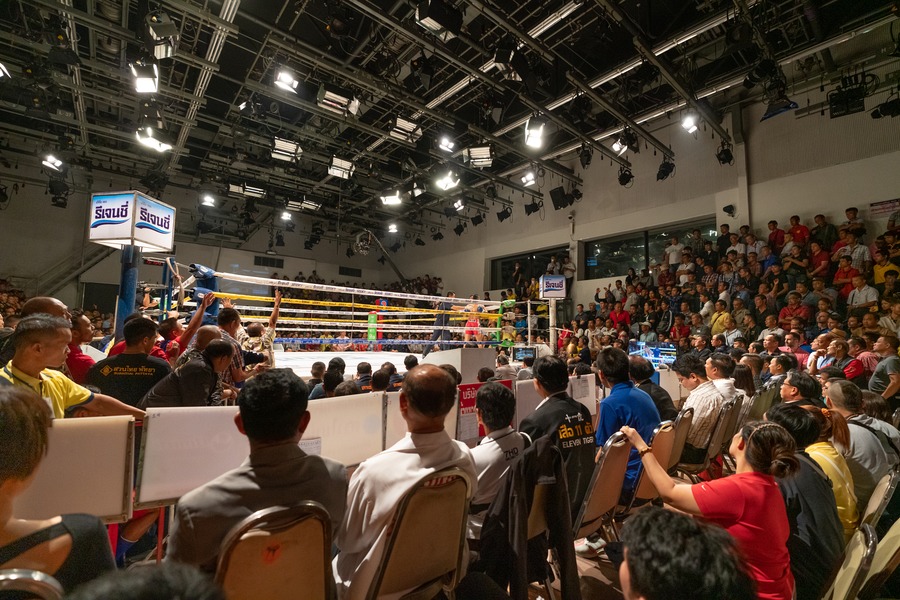 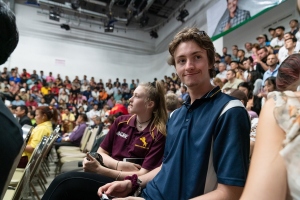 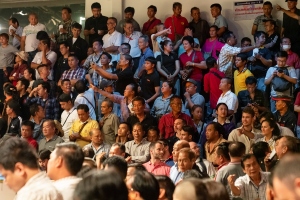 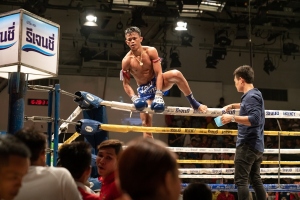 This tour is only available on Sunday afternoons at the Channel 7 Boxing Stadium, which has a strict dress code of long pants and collared shirts for both men and women. No food and drink are allowed in the stadium, nor can they be purchased inside. Toilet breaks are not recommended as there is only 1 toilet to service 500 spectators.

For a more professional match, I suggest booking tickets to the larger Rajadamnern Boxing Stadium, which holds matches every Sunday, Monday, Wednesday and Thursday evening. This stadium has a more organised feel. Drinks and snacks can be purchased for ringside spectators, and clean bathrooms can be accessed at any time during the game.

4. Walk on air at Mahanakhon SkyWalk

Bangkok is an absolutely massive city, but you can’t comprehend just how massive it really is until you view the city from its tallest observation deck, Mahanakhon SkyWalk. To save a few pennies, book tickets online in advance, then scan your voucher at the ticket counter to ride the high-speed elevator to the 74th floor.

Upon exiting the elevator, you’ll be met with breathtaking views of the endless city, but don’t stop there. Continue up to the 78th floor rooftop where there is a trendy bar, comfy seating, a live band in the evenings, and a glass-bottomed skywalk. I suggest arriving early if you want to score a seat as we arrived 5:30pm, just in time for Bangkok’s smoggy version of a sunset, and the place was already packed. 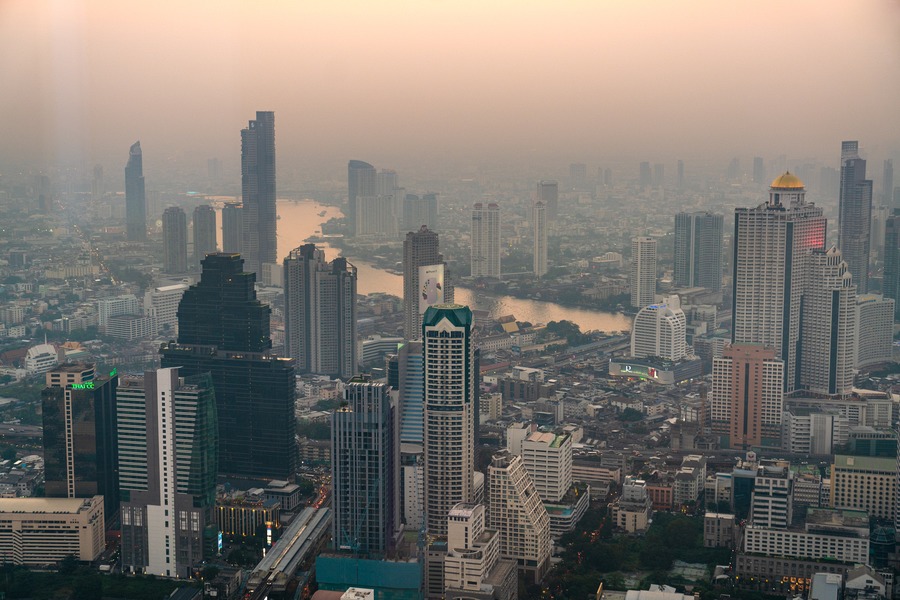 View from the top of Bangkok 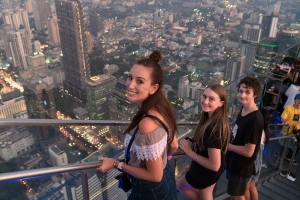 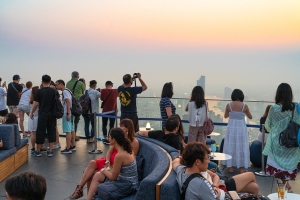 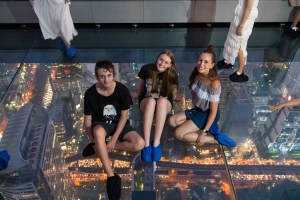 No, not a phony, pretend axe. A real one with super-sharp edges, just like you’d find at Bunnings or Lowes. Okay, it may not be the safest activity to do with teenagers in Bangkok, but it’s a lot of fun! When eating at ARTBOX Night Markets one evening, I happened to spot a sign promoting axe throwing at the rear of the market and had to give it a try, for myself as much as for the teens. The selection of ‘weapons’ includes large axes, small axes, knives and ninja stars, which you throw at a wall-mounted wooden target while a Thai staff member keeps score, and stops you from killing yourself by accident.

300 baht gets you 15 throws with a large axe after a quick tutorial and 3 trial throws. My niece picked it up straight away, landing the axe in the target’s bullseye throw after throw, unleashing her inner Viking. Now I feel a lot safer walking down dark alleys with her! 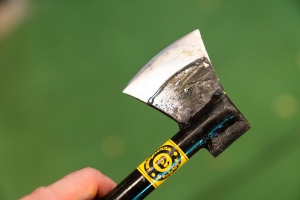 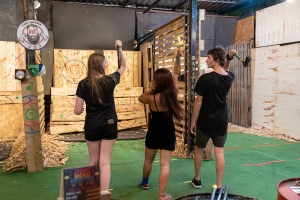 6. Relax with a Thai massage

Getting a massage is an essential thing to do on any vacation to Thailand, but when I found out my nephew had never tried a massage, and wasn’t at all keen, massages moved even higher up my to-do-in-Bangkok list. I don’t take “no” for an answer.

If your teens are massage newbies too, I suggest starting them off with a foot or head and shoulder massage and working them up to a whole-body oil or Thai massage. Every street in Bangkok has at least a dozen massage parlours, finding a good one is simply a matter of trial and error. A 60-minute massage shouldn’t cost more than 350 baht per person.

After his first massage, my nephew asked “when are we going back?”. 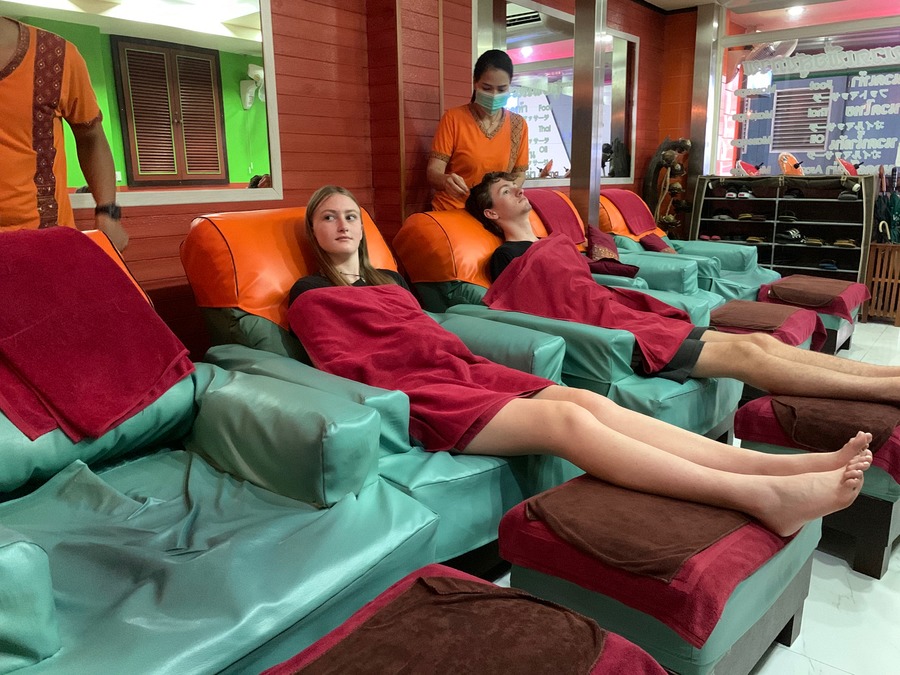 Of all the things you’d expect to find in Bangkok’s shopping malls, an aquarium probably isn’t one of them. However, that’s exactly where SEA LIFE Bangkok Ocean World is located, on the basement level of Siam Paragon mall.

I suggest booking tickets online in advance to save a few pennies and time queuing up for tickets. Redeem your online voucher at the information desk then enter the aquarium to marvel at an array of tanks filled with colourful fish. Highlights include penguins in an ice playground, turtles, peaceful seahorses hiding amongst coral, a shark tunnel, and rainforest species like piranhas, poisonous frogs, and giant catfish. 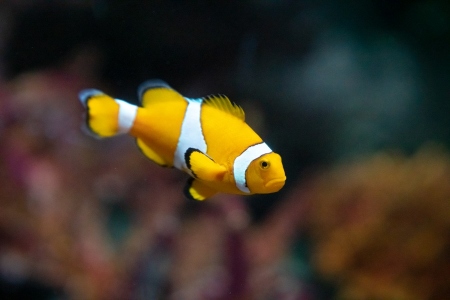 Tip: Book tickets to SEA LIFE Ocean World and Madame Tussauds Wax Museum as a bundle to save money. Both venues must be visited on the same day.

We took advantage of the ticket bundle and visited Madame Tussauds Wax Museum after the aquarium. It was quite tricky to find as there are actually 3, multi-level shopping malls clustered side-by-side. While the aquarium is located in Siam Paragon mall, Madame Tussauds is in Siam Discovery mall, which can be accessed from Siam Paragon by walking westward through Siam Center mall. This journey could only be made more confusing by traveling with a shopaholic who wants to look inside every store passed. Luckily, we didn’t have one of those (wink, wink) so made it to Madame Tussauds relatively quickly. We already had our printed tickets from the aquarium and went straight to the entrance.

Inside, we posed for photos with world leaders like Barak Obama and Queen Elizabeth II, hung out with Mark Zuckerberg and Albert Einstein, threw hoops with Yao Ming, saved the world with Captain America, and danced with Beyoncé, to name a few of the waxy celebrities housed inside the museum. 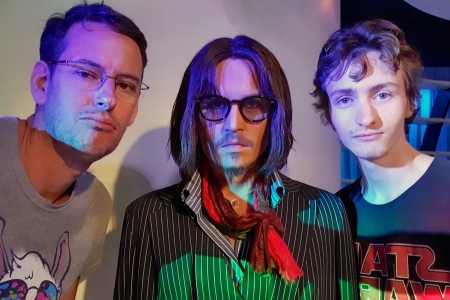 9. Drink mocktails at a skybar

If Bangkok’s endless sky scrapers have one advantage for visitors, it would be the abundance of rooftop bars. There’s nothing quite like sitting back with your favourite cocktail, or mocktail for teens, and watching the bustling city life below as the sun softly sets, turning the hazy sky from dim grey to semi-fluorescent grey-pink.

Some rooftop bars like Red Sky Bar have an age limit, not allowing anyone under 20 to enter, so check ahead. We visited Longtable, located inside Column Bangkok Hotel, which is open daily 5pm-2am. 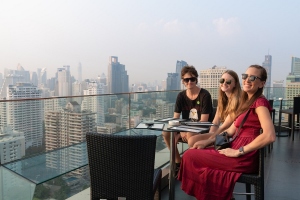 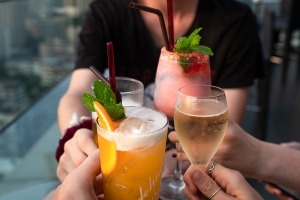 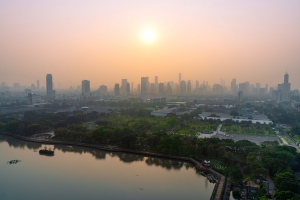 10. Visit the ruins of Ayutthaya

One thing I have always wanted to do from Bangkok is visit the ancient ruins of the Kingdom of Ayutthaya that appear to have leapt out of a scene of Indiana Jones. Ayutthaya was the second capital of Siam from 1350 AD, before the establishment of modern-day Thailand, and a wealthy trade city until its destruction by the Burmese in 1767. With a history that rich, I figured Ayutthaya would be an interesting place to visit with my niece and nephew so booked Withlocals’ Ayutthaya and Floating Market Day Trip with guide Sammy.

Sammy and his driver picked us up from our hotel in Bangkok and drove 90 minutes north to Ayutthaya, explaining the ruined city’s history and teaching us some Thai words along the way. We visited the reconstructed ruins of 3 temples, all of which looked pretty similar to the teens, but were uniquely spectacular if you ask me. With the temples’ grand stupas, it’s easy to tell the inspiration for Bangkok’s Grand Palace and Wat Arun came from Ayutthaya. The highlight was undoubtedly Wat Mahathat, where winding tree roots have wrapped their way around the severed head of a Buddha statue.