Once again our group of friends jumped in a songthaew, it was 10am and we were headed for the famous Chiang Mai zoo. The zoo is set in the most scenic backdrop with beautiful jungle and flowers surrounding the animals. 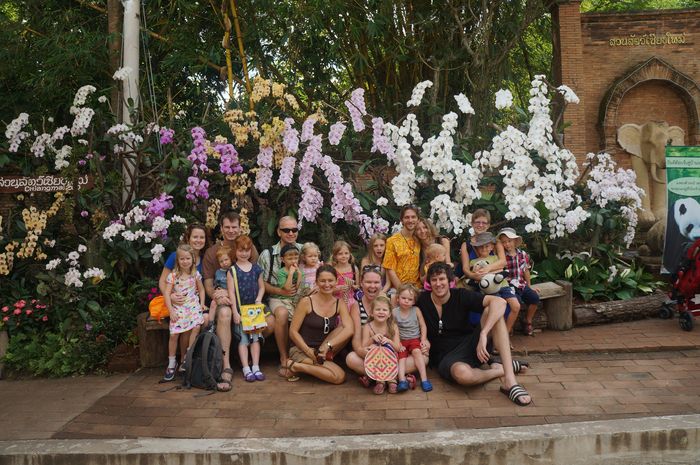 Entrance was 100B per adult, 50B per child and most things are extra. I prefer an all-exclusive zoo, so it was a pain to come along the surprise other costs throughout the day. The extra things you will pay for are:

Curiously there is no real layout or direction that we could see to the zoo and it is spread out over numerous acres. You will want to buy that tram/bus pass as there is a lot of ground to cover and it often results in doubling back.

I’ve never been to the zoo with so many people before and there was a lot of give and take with everyone wanting to see different animals. Overall I think we all worked rather well together in getting through the park and seeing what we wanted to see.

I particularly enjoyed watching the Americans oohing over the Australian animals, while we just wanted to bypass them for other interesting species. Kangaroos seem to be a rarity in the US, while we see them everyday back home on the side of the road or bouncing through the University grounds. All though our animals aren't as posh as the Chiang Mai ones who have their own toilet! 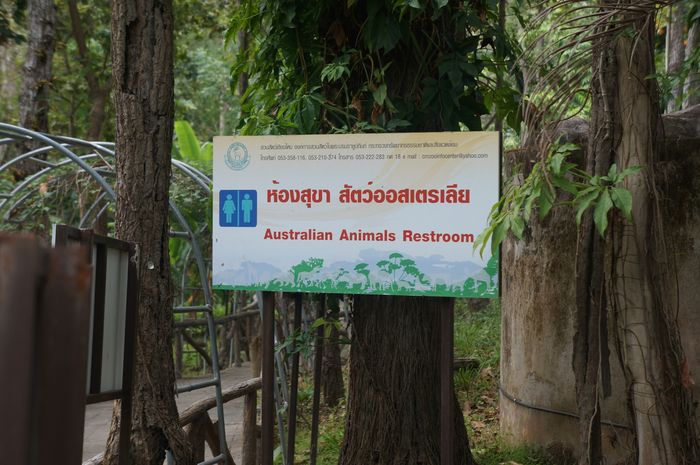 For me my favourite part of the whole day had to be the hippos. As we wandered over to the submerged hippos a staff member provided us with a few baskets of potatoes. Usually hippos are in water, never moving. These hippos spotted the tucker and made a beeline straight to the wall to eat everything that was thrown at them. I’d never seen a hippo move, let alone move that fast! You can see why they are considered deadly animals. When those jaws opened – wow! 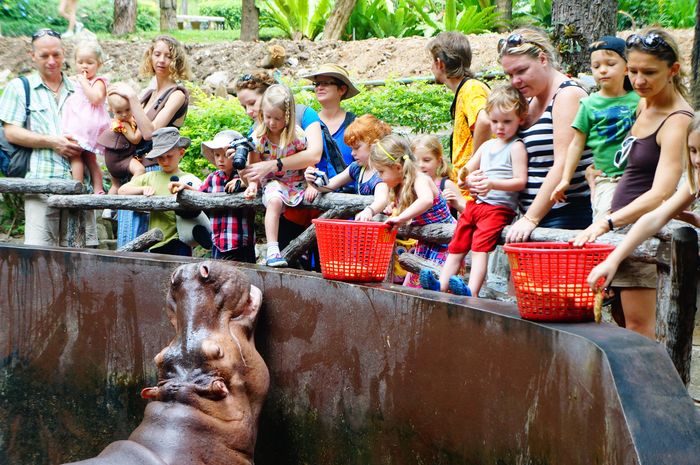 Big, huge, flabby gums masking giant, munching teeth. And it took more then one potato before they would close their mouth to chew. The kids loved feeding the hippos as much as the adults. I was mindful at all times of the small distance and easy access to those big mouths and held tightly to my toddler as he threw potatoes at the hippos face. On top of feeding hippos there were many other animals around the park to feed: giraffes, emus, elephants, leopards and more! 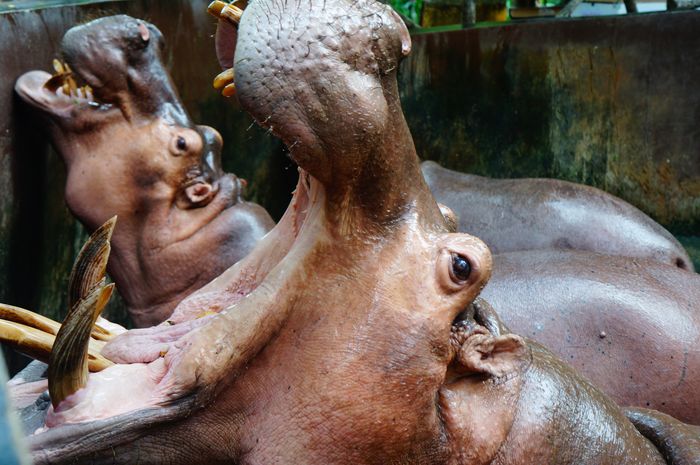 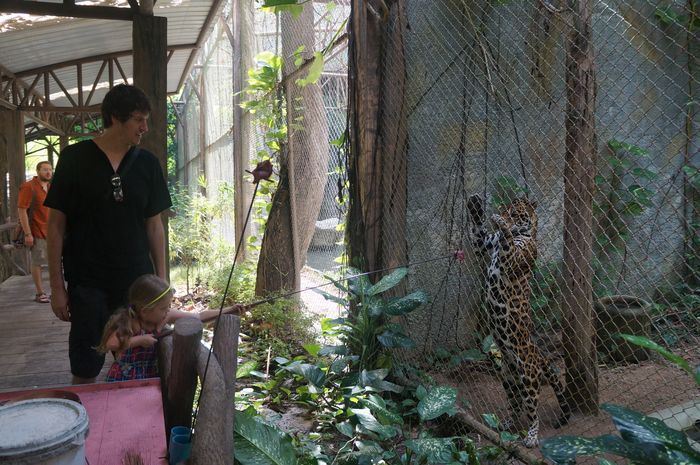 The map is not very clear on where to find food in the grounds, however when we managed to find some it was fairly cheap. There is also a 7-11 in the grounds. To escape the heat there is a small room filled with colouring-in, which the adults and kids alike loved. In the middle of the park is a very colour playground, which is also very old. There was a very strange contraption for flying across the park, which the kids were immediately drawn to. Luckily two of our dads came to the rescue to help the kids fly across. 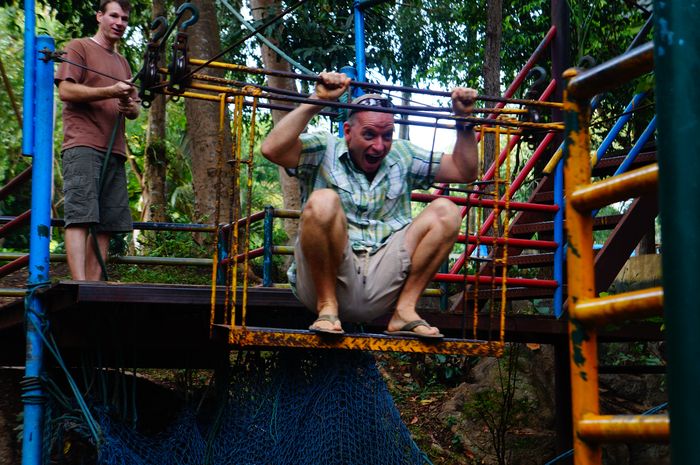 Panda’s were very cute and cuddly, eating the entire time. The show-off gibbons put on quite a performance swinging from tree to tree and the otters were very social squealing in their little voices at all of us. 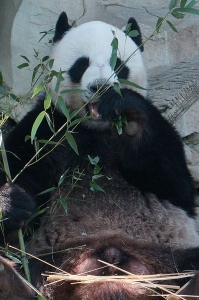 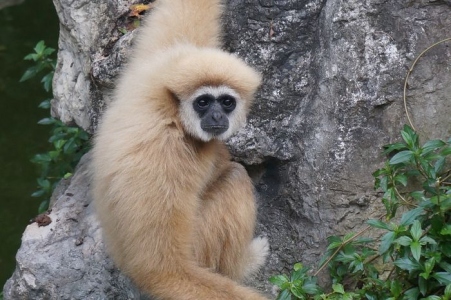 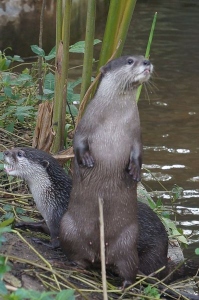 While we waited for a ride home the kids enjoyed a whole bunch of arcade rides for a few cents. And then crashed on the way back.

An enjoyable day with a songthaew of hilarious personalities. We were there until early evening, it’s a full day activity. Worth a visit, I’d go again! 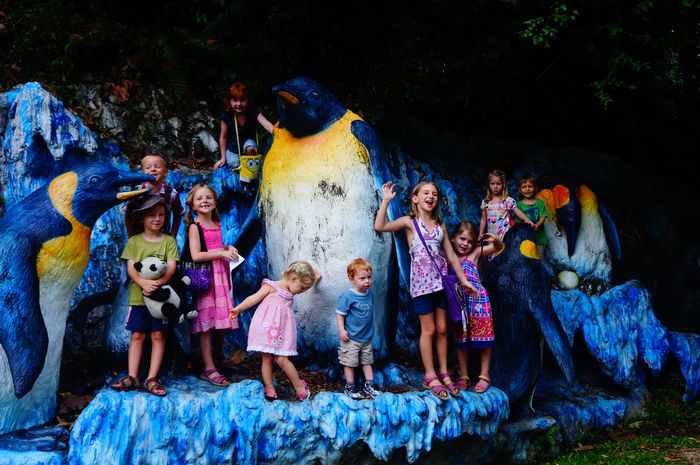 "I respond to every comment by private email. So please leave me comments, I love chatting to you" - Josh Bender
Posted by Mary on Dec 15th, 2012
Looks like a great day and Josh got some amazing pics!! We went last year for Christmas day with some friends...it was the best wa to spend Christmas!! Such an interactive place especially compared to zoos in the US...and cheap..woohoo, never been to any anaimla exhibit that was so inexpensive!