When I quit my corporate job in the Philippines at 21, I had about approximately $1,000+ USD in savings. This wasn’t ‘enough’ to really jumpstart a continuous travel adventure for the rest of my life; however, I was a fresh graduate who badly wanted to escape the 9-to-5 grind in order to go after what I really wanted in life: to travel the world, to work remotely, and to work for myself.

So for me… it was enough.

Besides, at the time that I resigned and started to travel, I have already managed to secure an online job that paid double than what I earned in the office—in a sense, that job had already given me the opportunity to continue living a life of travel sustainably. (If I may add, the work that I did online had even served as an inspiration to jumpstart my own online business today!)

But indeed, back then, I decided to just ‘wing it’ with what little resources that I had. I made it a point to travel cheaply as well so that I can save up more and travel more! And as it was, it worked out quite well!

From the moment that I quit my job up to today, my ‘digital nomad’ work consistently proved to be very helpful in funding and supporting my travel lifestyle:

• Blogging: I actually don’t ‘earn’ as much from blogging but I ‘get’ a lot of benefits from it in the form of free stays, free tickets, etc. That’s why in my opinion, it’s my most valued way of ‘funding’ my travels

• Online technical jobs: services like graphic design, web design, SEO, and online marketing. (These were the things that I really wanted to do or are interested in, and since I never learned them in school, I actually had to learn/relearn it all by myself when I quit my office job. At the start of it my traveling lifestyle, most of my income came from this, but today, it’s mostly from my own online business).

• Online business: As I’ve previously mentioned, this is where I mainly earn right now. Adapting the business model of one of the online companies I worked for before, I now have my own brand ‘Adalid Gear’ on Amazon and it’s going really good!

I think it would have to be my boyfriend, Jonas. We met at a time that I was transitioning to a travel lifestyle and the kind of work that he previously did to fund his travels may not be unique for others, but for me it was: he did online poker.

This was exceptional for me because every time I thought of card game players, I thought of hardcore gamblers who are throwing their money away and losing every single time—they wouldn’t earn any income at all! Plus, I thought that they would always be these insanely rich people who have the liberty to waste money anyway—they wouldn’t be the true-blue nomads who worked from the ground up!

...But NOT Jonas. He made me realize that there are actually professional poker players like him who can earn, who are not rich, and who took the time to learn the game through numbers and probabilities. I also learned that knowing bankroll management and taking time to learn the necessary skills are the things that separated him from the ‘gamblers’. Needless to say, he was really good at it (as well as some of his poker friends that I’ve met) because he managed to earn a living after he graduated in Belgium while managing to travel around the world for years without being glued to his screen all the time.

In fact, other than being a poker player before, he was also a part-time entrepreneur; but currently, as we partnered for ‘Adalid Gear’, we’re both somehow what you’d call full-time entrepreneurs.

Flights/Transport: I typically do slow travel, so I don’t hop around a lot in just a month; even if I do, on average, flight tickets would just cost around $25 since I usually watch out for promo fares. Yet often times, I get free tickets. Now South East Asia is famous for cheap transportation so getting around a city for example can be very economical—I won’t go over $100 a month.

Accommodation/Utilities: For a decent apartment away from a city center, it could be $300 a month (occasionally, I get free accommodation so costs can be $0).

Food: In exchange for the nearly-free travel perks that I get, I almost always have the liberty to splurge on food, and since I’m a huge foodie at heart, I tend to splurge a LOT. In a month, at most I can spend approximately $500 on food, but then again, because I also love going for street food (to taste real local food) and I also love cooking, costs for food per month can only be around $200.

Tours & Entertainment: I don’t go on tours, I prefer doing my own kind of tour which includes simple sight-seeing, etc.—I think the only time I go on tours is when a company offers them to me and of course that would often be free. As for entertainment, other than strolling around a city as a form of entertainment, the internet becomes my amusement almost all of the time. Now I often share costs for these (may it be for an internet connection, shows, etc.) and a month, it could around $50.

Mobile/Communication: Almost negligible. I am famous among my friends for not using my phone much—I only use it for Instagram photos, haha! (I actually rely on the internet/wifi for keeping in touch, a cost I’ve already taken note of above, so that’s why I don’t spend a lot on my mobile).

Total Outgoing Expenses: Going by the numbers, I spend roughly $650 a month in an S.E.A. city. Sometimes this could be less (if I work, more than play) sometimes it could be more (if I play, more than work—even more so in higher cost-of-living countries).

Blog partnerships. These can be with airlines, hotels, etc. wherein we both go on a deal: in exchange for an all-expense-paid trip (tickets, transpo, accommodation, tours, food, etc.) that they give me, I will give them online exposure in return. Most of my successful deals come from companies/brands that I believe in, and who are in S.E.A countries.

(Other methods would be couchsurfing or home/pet sitting that provides no-cost accommodations.)

What things have been the biggest waste of money for you?

I think it would have to be the Visa application fees—it’s a necessary cost yet a big waste of money especially if I get denied (which happened once when I applied for a Schengen Visa). Other than that, I can’t think of anything else. I don’t splurge. Except for food, and even if I splurge on such things, I don’t think of it as a waste at all! It’s a part of my travels!

To never undervalue the skills that you have and the things that you can do. And in the words of Alan Watts: “Just do what you love and the money will come.”

You see, I used to settle on a measly income from the company that I worked for as I did processes that I really didn’t like since I thought to myself that: “I’m just a fresh graduate and this is how it works; eventually I’ll earn more money anyway. I’ll be secured here like everyone else”.

But I realized that I don’t need to go by society’s progression. After I learned the numerous possibilities that I can actually do, I realized that no matter if I’m ‘new’, as long as I know my value and do what I really love, then I can earn so much more—and I have.

I say this because even if you’re a fresh graduate in a big corporation, you become a part of a vital process in the company that generates a LOT of income, so in truth you shouldn’t be unappreciated that much—now, I understand that we can’t go over such a system in a corporate setting, so I decided to GET OUT of it.

I decided to work for myself and I marketed my skills by showing what I can really do/offer. I went for a huge market that is hungry for skilled freelancers: the online realm. This course of action really had a huge positive impact in my life because it opened me to possibilities that I wouldn’t have dared to venture into if I was still a corporate employee who is working on a stationary and uninspiring office job.

Obviously, achieving this kind of success and happiness does not only apply to the ‘internet workers’ like me. A lot of people have found profitable opportunities by being English teachers abroad or by being dancing instructors while they are on the road—this just simply means that for as long as you do what you love to do, you can eventually become a master of it and the money will surely come. 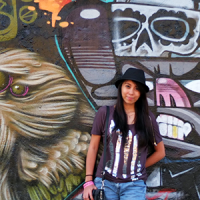 You can find Aileen Adalid here -

"I respond to every comment by private email. So please leave me comments, I love chatting to you" - Josh Bender
Posted by grasya on Mar 3rd, 2015
as I said.. my goal is to spend lower than that ^_^...
Posted by Aileen / iAmAileen.com on Mar 3rd, 2015
Thank you so much for this! I am very honored to be featured by you guys. Cheers! :)
Posted by Malinda @mybrownpaperpackages on Mar 5th, 2015
Thanks for introducing me to Aileen. And Wow - I never even thought of gambling as a way to pay for travel!