Ever met someone on holiday that convinces you to do a tour? You actually know nothing about the tour, but your husband wants to go because it’s Mayan ruins and that has to end well, right? Next time do your research or you too could be on a 6-hour journey to see ruins.

We met our new friends at the reception of our hotel. They were going kayaking and we were going cycling. When we got back they were by the pool, which is where we planned on spending the remaining of our day. Soon their kids were playing with our kids and we were all sharing stories and we were fast friends. Like really fast, like the friends you end up spending every day with because they are so awesome.

They had 3 days left on their holiday and we were there every step of the way, swimming in pools, eating out and then the tour. Josh and Mike were totally into seeing these ruins at Lamanai. We had nothing else planned so I agreed and we set up a tour for 7am the next morning.

Getting to Lamanai turned out to be a bit of a trek. Look where it is on a Google map I drew up for you. I had no idea. 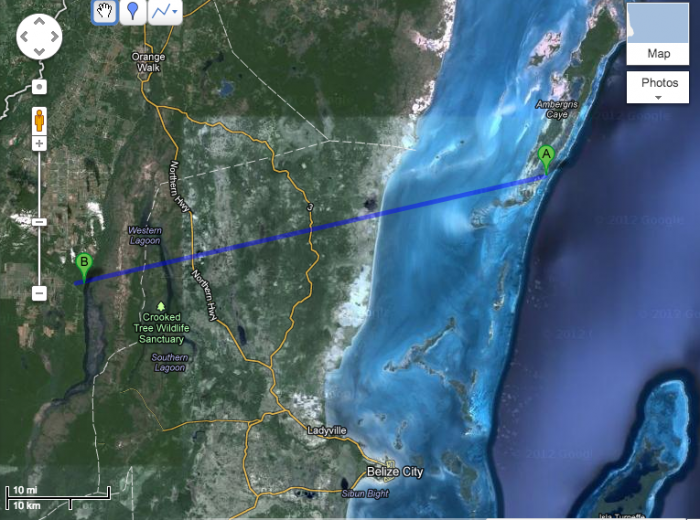 Anyway, it was a super long day which perhaps was not the best for our two toddlers, but certainly was an adventure and since we had friends to chat to along the way it did go rather fast.

The speedboat ride was magnificent as it slashed through the aqua water before reaching the mainland amazing mangroves and then starts death-defying, squeal-inducing tight turns at high speeds with the edge of the boat just inches from the trees. It was just like a roller coaster on the water. Mia and Caius loved every second. 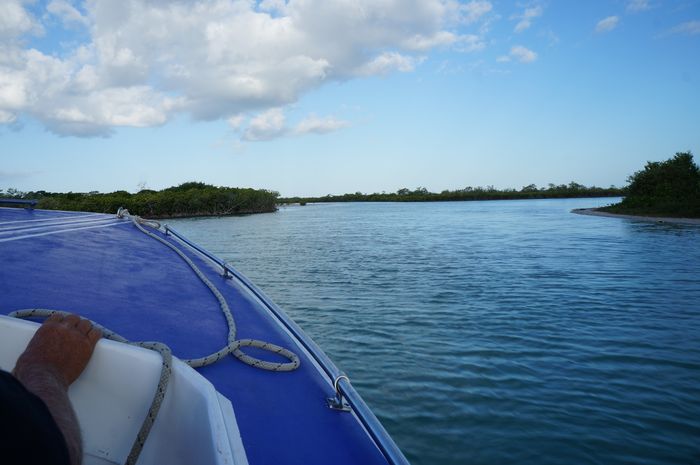 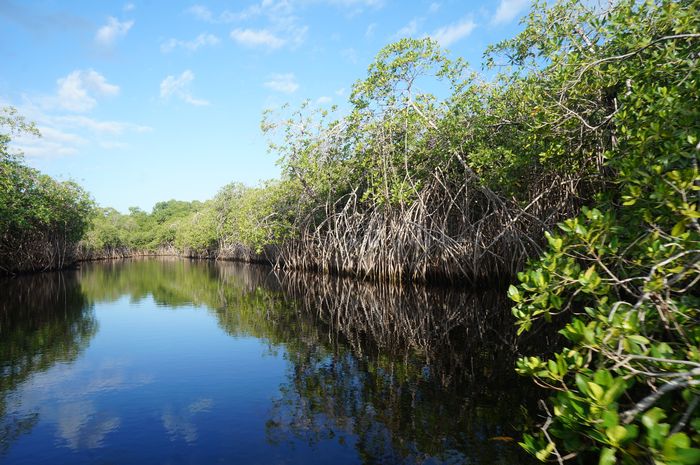 The boat arrived in a tiny village off the grid (literally), and our guides set up a breakfast of Belize food, fruit and moist, delicious banana bread. After a bite to eat, toilet break and a small bit of shopping we were loaded onto a very old school bus. We took the front seats to try and prevent what was sure to be a bumpy ride. 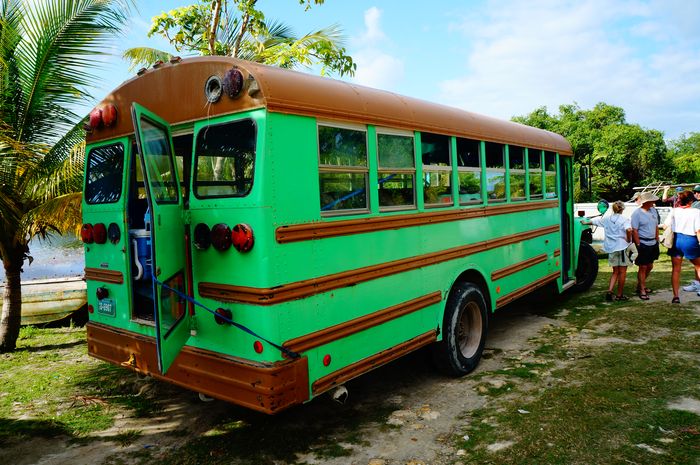 We were right. The bus lacked any kind of suspension and the road was not paved (most of the time). Basically, it was not very enjoyable. And after one hour we were dying to get off and get back on our much smoother speedboat ride.

After another hour speedboat ride we finally arrived at Lamanai. Our guides set up a lunch for us of chicken, rice, veggies and plenty to drink. By this stage I was not feeling very well. On arrival in Belize I got swimmer’s ear and by this third day it was a full-blown infection, which had taken my appetite and (most of) my humour. 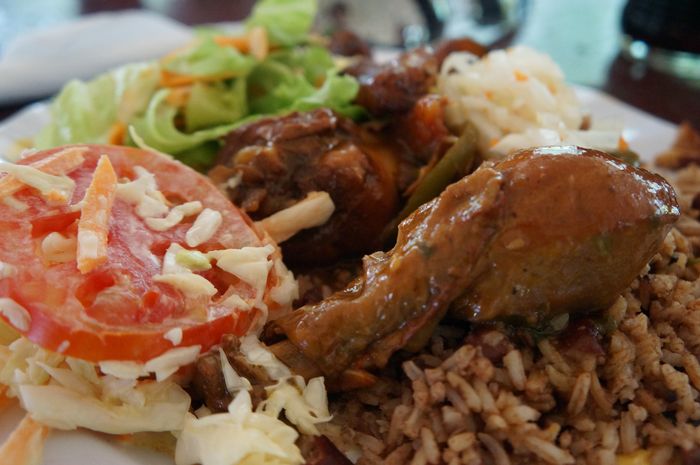 But I soldiered on. I’m good like that :P

Our tour of the ruins was actually quite good. The kids climbed and played, ate and whined, but mostly were glad to be free to just run around with other kids. 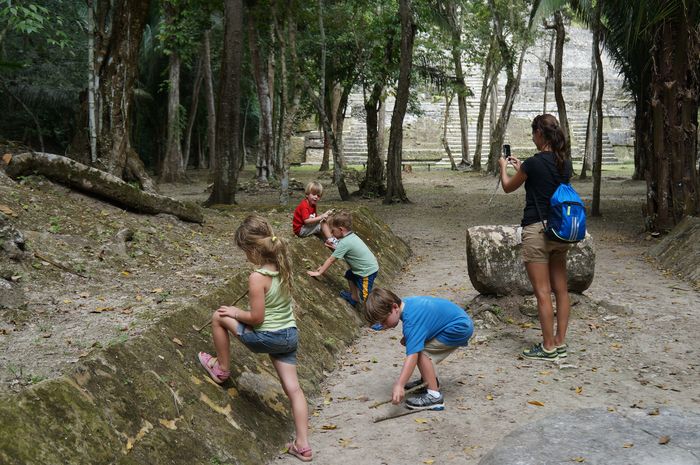 The largest ruin was an exciting adventure that I did not hesitate to climb. Josh and Mia had climbed Coba, while I declined due to the humidity (and my humility - I didn't want to show Joshy up). But today was not as hot and the time was right. I filmed the view for you. 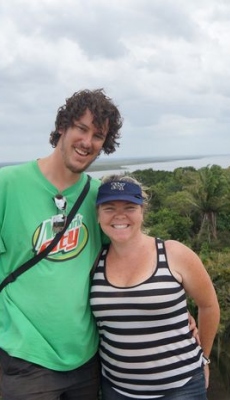 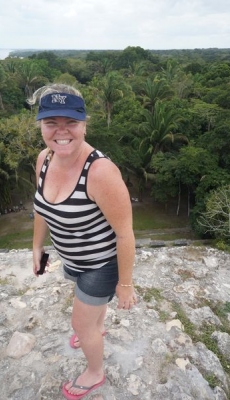 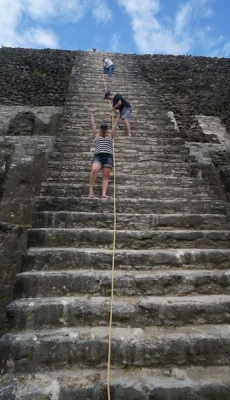 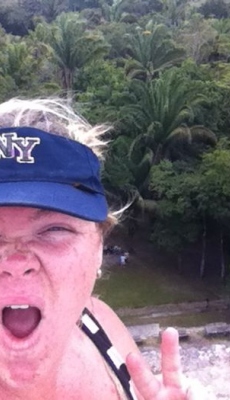 There is evidence on Mayan life that dates from about 1500 B.C. here at Lamanai, which means "submerged crocodile", many of which live along the banks of the New River. The vast majority of the site remained unexcavated until the mid-1970s.

It really is actually a beautiful ruin with distinctive, lush jungle surrounds. My favourite tree is this first picture below - a snake cactus. If I stumbled on that in the dark I would literally freak out. But it's not snakes, it's just cactus... Deceiving right? 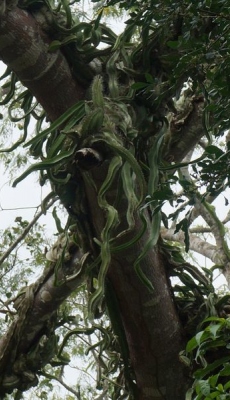 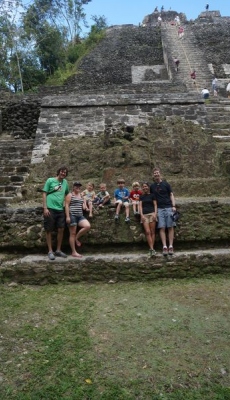 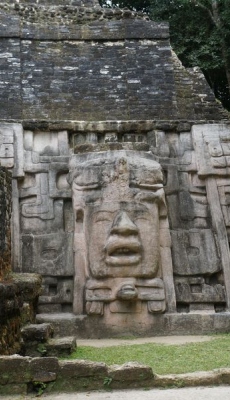 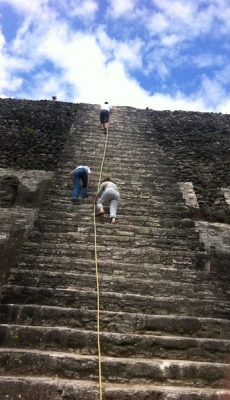 The kids were exhausted. We headed back to our boat and awaited the rest of the tour group who were shopping at the little village. The staff cracked open the alcohol and soon we are sipping rum punch and letting it sooth (or burn) our insides.

The boat filled up and we started our journey back home. Speedboat, bus, speedboat. The final speedboat ride gets cold as the sun starts sinking over the teal blue ocean. Our friends were dropped off first and we give them big hugs. It was their last day of holidays but we promised to visit them when we returned to the US. 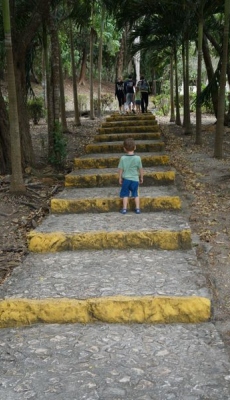 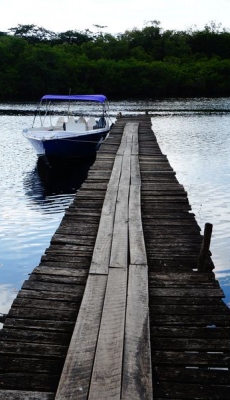 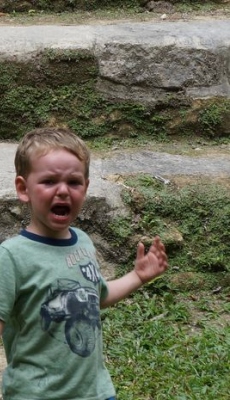 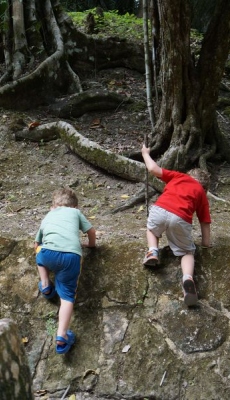 Our walk home was the final leg of our journey and we all craved our beds after 6 hours of travel. The kids were asleep in seconds and we were not far behind.

The journey was long and one I definitely would not repeat or had done if I had known in advance. But it was not a bad day. Josh was delighted with the ruins and being the social butterfly I am, I was happy with the company and opportunity to be with another mum. We are so grateful that Mike & Emily shared their vacation with us and can’t wait to visit them again… Perhaps on a slightly less travel-crazy day.

If you want to check out all the beautiful pictures from Lamania head to our photo journal.

"I respond to every comment by private email. So please leave me comments, I love chatting to you" - Josh Bender
Posted by Karin on Mar 20th, 2013
Oh poor Caius too much him but looks fascinating
Posted by Living Outside of the Box on Mar 20th, 2013
Hahahaa..yes! I think we considered those ruins for all of 2 seconds (once we realized how far they were from the road)!! My sister and her hubby took a cruise down there, and actually did a trek to these ruins!

Good for you climbing those. I got so sick of climbing pyramids in Mexico and ...I quite climbing them and got lazy :-)

That bus ride does not sound fun!