Have you ever been so scared your legs start shaking? Your hands get clammy, your throats gets dry. And what seconds before seemed like a great idea, suddenly seems foolish and irrational. A scream erupts deep in the dark tunnel and then a flashing light turns from red to green. I cross my legs, fold my arms, close my eyes and scream. The water pounds on me as I slide down the Leap of Faith through a dark twisting tunnel into a transparent tunnel surrounded with hungry, swimming sharks. It’s over, it’s not the end. And suddenly what seemed scary and frightening a few seconds before now just seems trivial. 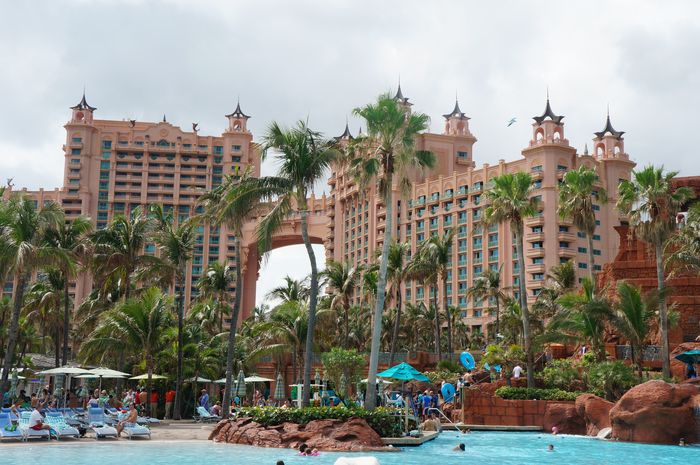 The Atlantis Resort is located on Paradise Island, roughly a ten-minute ferry ride or 15-minute taxi trip from Nassau, Bahamas. The entire island has been sold 5 times, once by Donald Trump and also went through a name change from it’s original Hog Island.

Our boat docked into Nassau early morning and we did not look out our windows until after 9am. The view was so much prettier than the sullied views that made up Freeport, Bahamas.

Both kids had chosen to be in Kids Club today so we dropped them off at 10am and Josh and I got off our cruise ship to check out Nassau. The port was crowded with other tourists. 4 giant cruise liners were in port and it seemed all tens of thousands of people had decided to enjoy the beautiful day on Nassau.

We followed the crowd into a small entrance hall where we were hounded to buy a tour, take a taxi, ride a boat. The hall was filled with people on laptops. Free wifi can do that to you. Having decided that we wanted to check out the waterpark on Atlantis we decided on a boat ride to get us to Paradise Island.

The boat was $4 per person and they led us through the markets to the ferry. Our guide was very entertaining pointing out Nicholas Cage’s home, where Anna Nicole Smith died and a yoga retreat, which he did not recommended because it had 4 rules, which made vacationing dull – 1. No eating meat. 2. No smoking. 3. No drinking and 4. No sex. 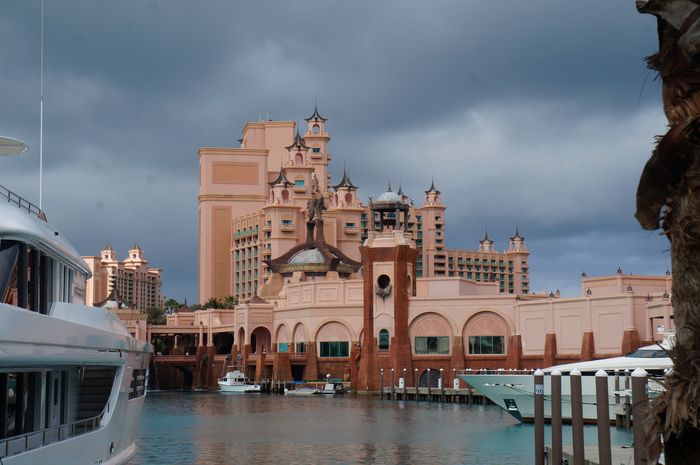 When we reached the island we had to walk a fair way to find the casino where tickets were for sale. The tickets were $125 each! This got you a tour, entry to the aquarium and access to all the beaches, slides, towels and sun chairs. It was expensive and children 4 – 10 were $80. We were glad the kids had opted to stay onboard today. 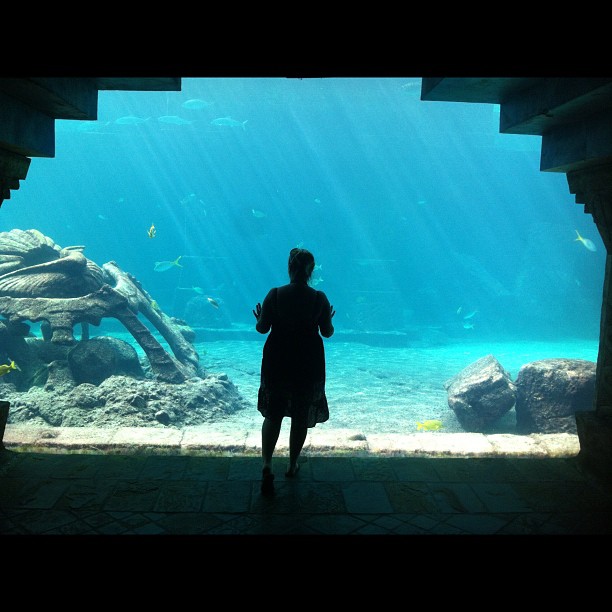 A walk through The Dig, which is set up like an archeological underwater labyrinth, took you through to the pools and slides. This place was enormous and we didn’t even know where to begin. But once we spotted a slide going through a shark tank we knew that was where we wanted to begin. 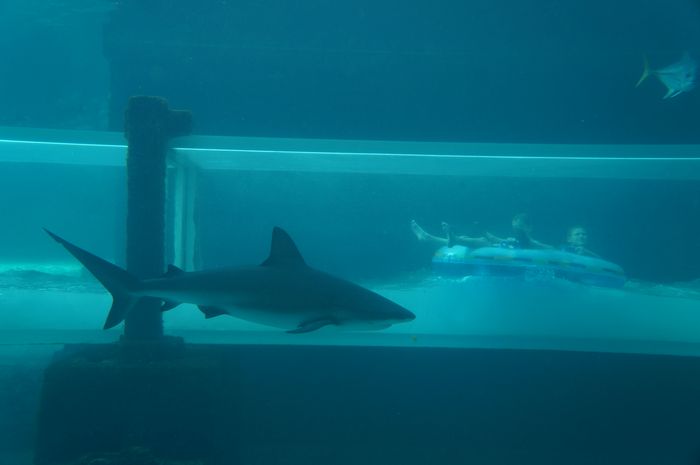 Usually when we visit theme parks and waterparks one adult stays with the children and the other goes on the slide by themself. It was exciting to finally be able to get double tubes and go on the slides together. Also its important to note that the height restrictions on all slides is 46 or 48 inches, so my 4 & 2 year old wouldn’t have been allowed on any.

Our first slide was on a double tube that went through a dark and twisty tunnel and then shoved you into a transparent box. This box allowed your tube to float gently through while fish and sharks swarm around you. At the end a strong current pushed you down through a waterfall and out into the exit pool. It was awesome. Almost as awesome as the Leap of Faith, which I described above. 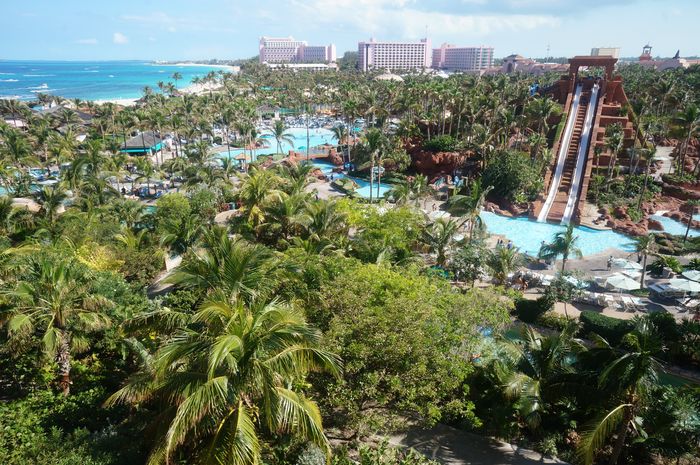 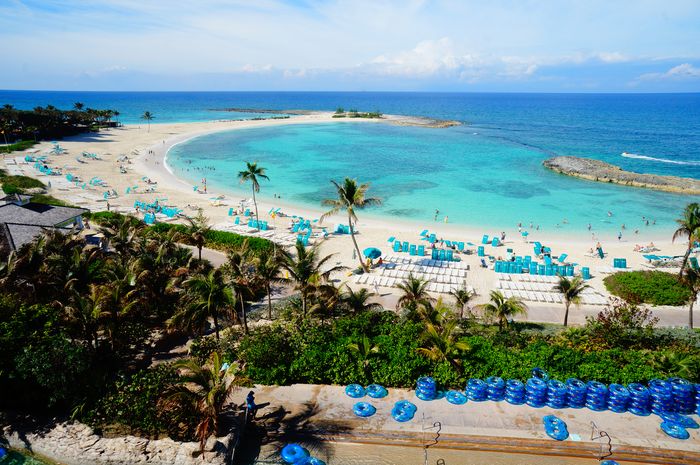 The resort itself was also amazing, offering scuba diving, snorkeling, dolphin interaction. The presidential suite over the arch is rented for $25,000 per night with 4 night minimum stay. Oprah, Michael Jackson, Elton John, Bill Clinton and more have all stayed in the suite. The layout and design were immense and it’s definitely a spot I would love to come and stay at. You could spend days in that place. We only had 3 hours.

After we went on as many slides as we could and floated the rapids and swam at the beach we decided on a Taxi ride back for the same price as the boat $4 per person. It took us through the "real part" of the Bahamas. The run down houses and abandoned cars. This section is known as “over-the-hill”, where the folks are considered poor. The economy has been pretty shattered since the GFC.

We raced back to the ship to collect our kids so we could avoid a repeat of yesterday’s bad parenting (read previous post) . Josh and Caius both hit the sack and were asleep in seconds, while Mia and I opted on some pool time.

Have to say I love Nassau and want to come back. Perhaps you would like to pay for us to stay in the Atlantis presidential suite? You know, for research purposes? :)

More posts from The Bahamas...

"I respond to every comment by private email. So please leave me comments, I love chatting to you" - Josh Bender
Posted by Bethaney on Jan 29th, 2013
This looks like so much fun!!!! It must have been so nice for you two to spend some quality time together... even if it was expensive!
Posted by Gay Emami @ Pinay Travel Junkie on Jan 29th, 2013
Wow! $250! Then again, that's one insane aquadventure! Hopefully someday we get to try it out, though I can foresee a lot of bickering between me and the hubby before that happens. LOL. Enticing photos!
Posted by Alyson on Jan 30th, 2013
I've always wanted to go there, I'm a sucker for fish, but at those prices??? No way, maybe if you stayed a night in the hotel it wouldn't seem so bad, or maybe if I email them and tell them I'm going to be the next big thing in travel blogging they'll let me in for free :)
Posted by travel lady on Jan 30th, 2013
Good Gowd that is one expensive few hours, looks incredible though, love kids club. That is the resort we plan on hanging on in, but we had to switch our plans this year, BLAH!
Posted by Jo (The Blond) on Jan 30th, 2013
Oh my 125,000 per night? Is it made out of gold?
Posted by travel lady on Jan 30th, 2013
We thought this would be a slow period in our business, but it isn't! We figure we would hop on a plane whenever we see a quiet time. Plus, we are moving, yet again.
Posted by Michele {Malaysian Meanders} on Jan 30th, 2013
I've always wanted to go here on a romantic getaway and didn't realize that they had a day pass option. Did you know that there's an Atlantis in Dubai?
Posted by Tiffany - FiteInertia on Jan 30th, 2013
Wow - that is elaborate and expensive. Glad it was cool though! We went on a cruise last year and could not justify the cost of the Atlantis day (although my 10 year old was begging us too!). So, glad we got to live vicariously through you and Josh. We ended up getting off our ship briefly, did a bit of window shopping, and then enjoyed having the ship practically to ourselves!
Posted by Vicki @ Knocked Up and Abroad on Jan 30th, 2013
This place looks like a magical wonderland! Sometimes it's pricey to visit a little big of magical wonderland, but I bet you don't regret the experience right? I wouldn't being in the Bahamas right now. Sigh!
Posted by Erin on Jan 30th, 2013
Bethaney - Price to pay to be alone, haha.
Gay - Hope you win.
Alyson - This was the price without the hotel room, imagine that!
Travel Lady - its magnificent, I want to go back - tell me when you go!
Jo - I would love to see it and let you know :)
Michele - I did know Dubai had one, that was where I planned on doing the slide with the sharks, I actually had no idea this one was here in the Bahamas.
Tiffany - When we did head back to the ship about 3pm we noticed it was pretty deserted, love that! :) So glad we could take you there.
Vicki - You are right, i don't regret it. I regret I didn't have more time, but not that I had to spend that sort of money for a little slice of heaven. Hope you get to the Bahamas soon.
Posted by Rhiannon on Jan 31st, 2013
Is there a picture of the leap of faith? and you said something about a previous post explaining bad parenting lol but I cant find it? :( xxxx
Posted by Erin on Feb 6th, 2013
It just went live Rhiannon, sorry for the wait :)
http://travelwithbender.com/travel-blog/bahamas/cruising-the-bahamas-on-carnival-sensation/
Posted by Nicole on May 24th, 2015
Just so you know, you can rent a room at the Comfort Suites next door for about $200-$250 for the day and it comes with 4 passes to Atlantis and you will get wristbands to get access to everything if you ever end up back there with the kids.
Posted by Betsi on Sep 3rd, 2016
We love Nassau! It has some true hidden foodie gems :). Paradise Island is a bit pricey so agree with Nopico,e if you go back stay at Comfort Suites.
Posted by Edmond on Oct 21st, 2016
#CruiseSmile OMG, jumping Jupiter . I am elated to win any of your fine cruises. But I luv to see Dubai around it. . Thank you for the awesomeness, the contest, and generosity. :) Pick me.
Posted by wai man on Oct 25th, 2016
i like a paris cruise. entry pls
Posted by Kara on Sep 13th, 2019
We have been going back and forth whether Atlantis is worth the money. Thanks for the review! The kids want to go, but I've heard it's so expensive. Thanks, Kara