Hong Kong: Great Airport But Not the Friendliest People

Collecting our bags at Hong Kong airport has never been so much fun as my daughter decides to help. She comes around the bend of the carousal holding onto our bags with all her might, too heavy for her to lift off. I run towards her, camera in hand, to catch one of the funniest moments I have ever seen. 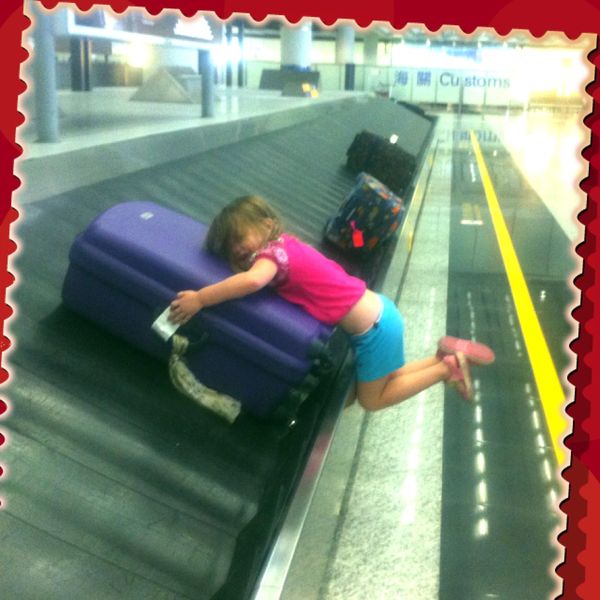 Our flight with Cebu Pacific was very entertaining. Half way through the flight they hold a quiz. It’s a simple movie quiz where hand up wins. I got one of the answer’s right. My prize: a pack of 2-minute noodles. Haha, big spenders!

Our arrival at Hong Kong airport was great. Most other airports have been simple low cost airports, finally a gorgeous airport with loads of restaurants, easy immigration and very clean. One problem: what happened to the smiles?

Not the friendliest people on the planet

Within one hour of arriving our children had been told off three times at the airport by staff. Nothing major, minor stuff like swinging on a bar, touching a wheelchair, running past immigration… But in Bali, Singapore, Philippines, KL, it’s all smiles and oohing and aaaahhhing…. Hong Kong, it’s tuts and tsks and humphs and frowns! Whoa! We weren’t even out of the airport and we were noticing a massive change in behaviour towards the kids and us.

Hong Kong is clean, exciting, fun. There is so much to do and so much to see. It’s an overload on the senses with hanging chickens & ducks in most doorways, flashing neon lights in most streets.  In fact it is one of our favourite destinations so far, but the people...

They seriously put me off Hong Kong. We hardly saw any children, one lady told us they were all at home studying or in school. The culture is real wealthy; there is a huge love for nice, expensive things. Plenty of Gucci, Tiffany & Co., Calvin Klein, watches and clothes and cars. The space is minimal, everything is built up. Apartment living is tiny, they call it the City of Skyscrapers and (just like the buildings all on top of each other and up, up, up into the sky) the people also seem to have no concept of personal space. There is pushing and shoving, there is standing close and sitting on top of.

Ever heard of personal space

We come from a pretty laid back society in Australia, where space is our commodity. Our houses are all one level and the plains stretch for miles. Here in Hong Kong space comes at a premium and just as in Australia where we leave a seat between people in the cinema and a packed train is on Australia Day once a year, Hong Kong have also become a people of their country. 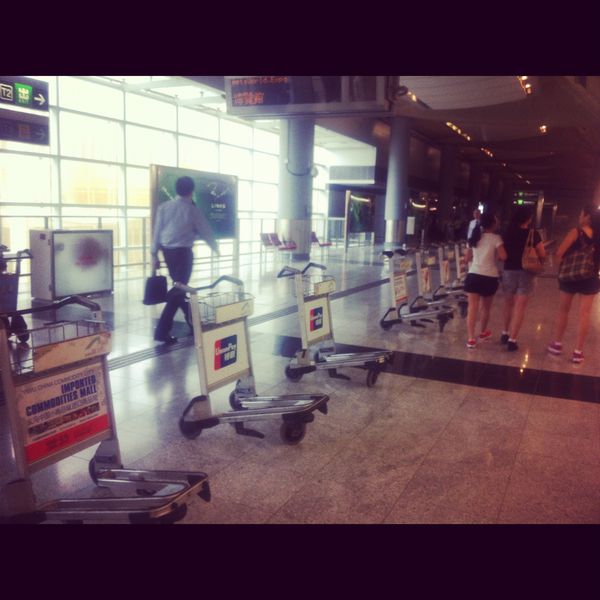 The first time a lady pushed past me to get onto the tram before me I was shocked. She didn’t seem rude, she didn’t give me a filthy look or mutter under her breath or outright insult me like an Aussie, she just pushed past and got on.

I spoke to some previous Hong Kong dwellers now in Australia and they told me it was quite normal. To simply hold my ground and do not let them push in, especially at Disneyland. How amazing! A chance to be fully rude to someone and have it be a normal place in society.

The first time  I blocked someone from pushing in, I felt ultra rude. We were in a line to get on a train and someone came up the side trying to beat me to it. I shoved my pram in front of their feet and moved in front of them expecting a curse. There was silence. I glance behind me and the lady is nonchalant. In Australia I would have started a fight ha! I have learnt how to respond to the Hong Kong pusher.

We also had plenty of instances where we were refused a taxi, because they didn’t like where we wanted to go. Very frustrating with tired children.

Don’t get me wrong there are exceptions to the rule. We met a lovely man and his daughter on the tram who was very helpful in explaining how to use it, where to get off, etc.

Back to the arrival

Anyway there is a train that leaves the airport and goes straight to Kowloon or Hong Kong. The trip takes less than half an hour. You can take your luggage trolley right to the doors and when we got off the other end at Hong Kong there is luggage trolleys waiting for you to go straight to a taxi with. So helpful, fabulous. The train stops for a reasonable amount of time too so that you can get your luggage in and out. Its clean and comfortable, there is a TV and sound comes from the seat heads.  Total price for 4 was $30.

The Owner of our apartment was very friendly also via email. We never met him, but his mother let us into the property. She was slightly brusque in a “I’m-very-busy” kind of way, but helped with our bags and let us know where everything was.

We had arrived at our second Air BnB place in Sai Wan. There were three buildings and we waited in the first, until she arrived and helped us to the second. The lobby was clean and modern and the security guard’s friendly.

Up to the 13th floor to our Waterfront Apartment. Well the water was quite some way away, there was no crossing the highway to get to it. And the one window of the water views was tiny, but there it was, water & a view.

Anyway the lady was worried all our luggage wouldn’t fit. I thought how silly. I was wrong. Wow the place was small. A 2-bedroom apartment with a bathroom, kitchen and living area. Two double beds and a sofa, thank goodness. Kids shared a bed, I had a bed and Josh slept on the sofa (which actually was very comfortable). 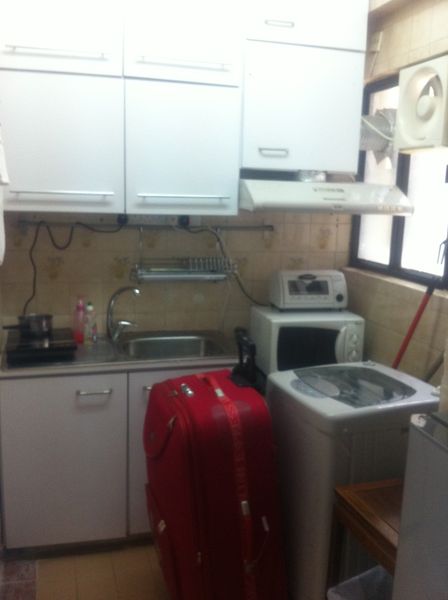 Beside it being so tiny, it had great wifi, movie channels and a great location. We were steps away from the tram which took us wherever we wanted to go for $1 whole family (about 30c per adult, 15 cents per child). The apartment is $100 per night, the smallest place we've had at the largest price.

Josh reminds me I cannot compare the apartment to other places we have stayed in, which are larger and cheaper, but only with other Hong Kong places. We expect that most places would be so small and could not live like that more than the 5 nights we stayed. One suitcase on the kitchen floor, one in one bedroom and one in the other. There was no space or opportunity to be alone and the shower that came up to my chest, reached Josh’s tummy. Let me say it’s good to be in Bangkok! 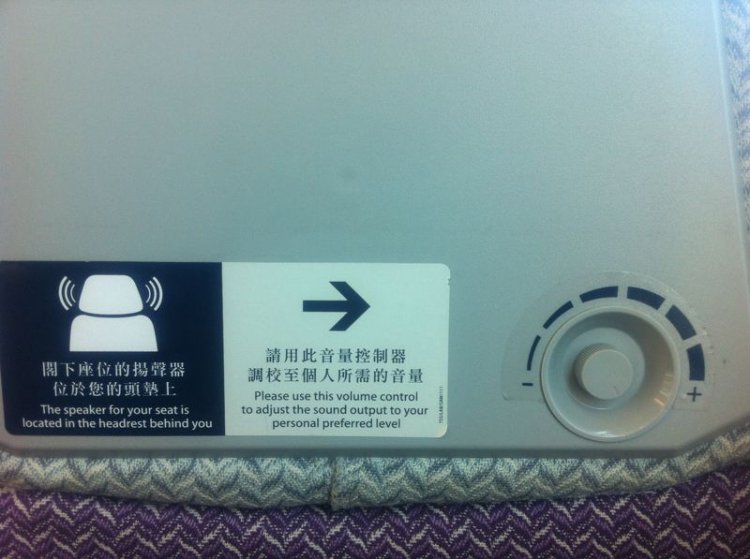 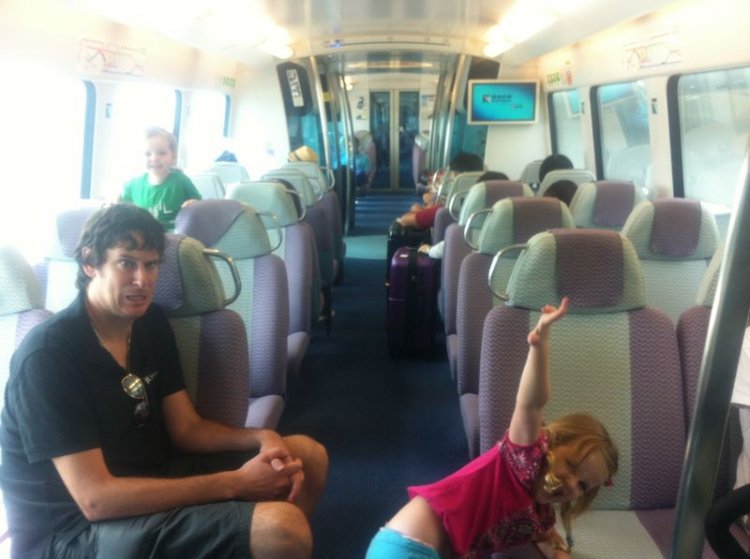 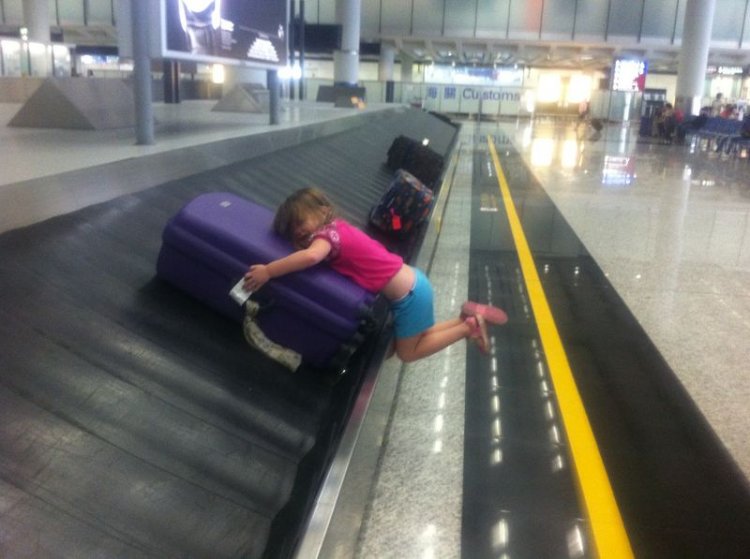 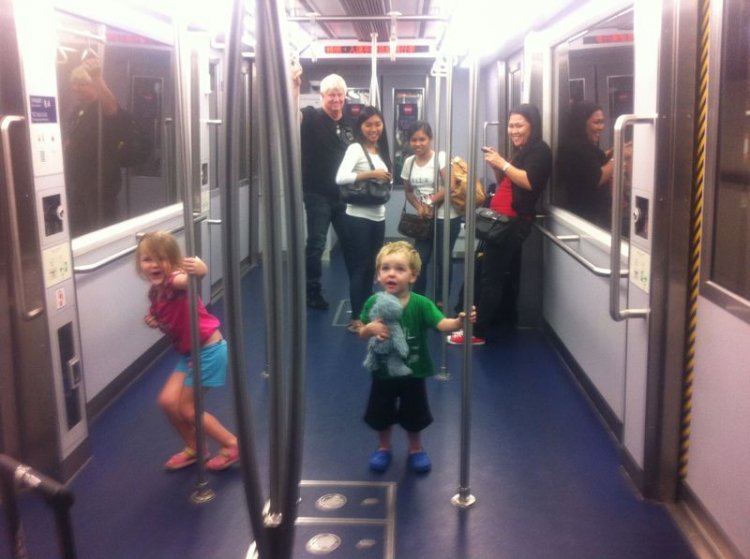 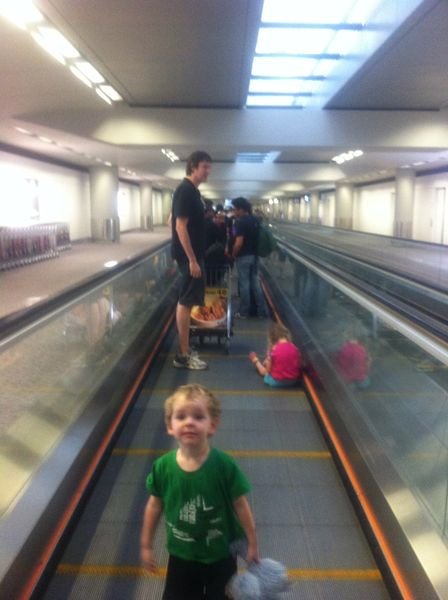 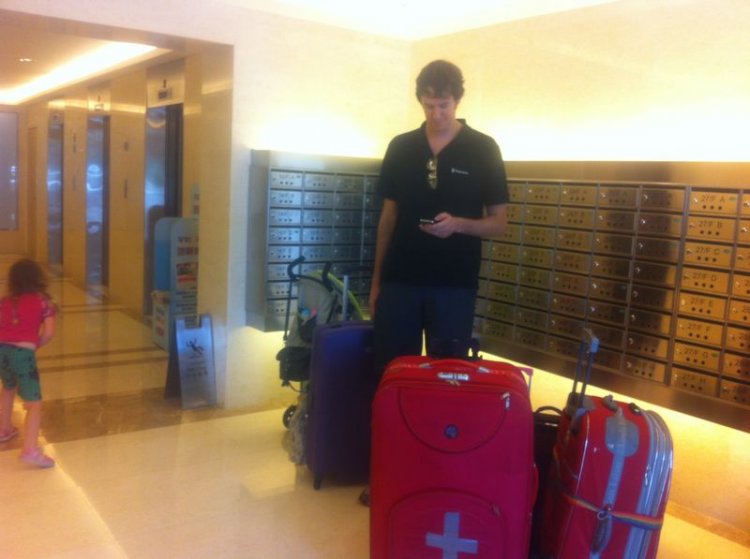 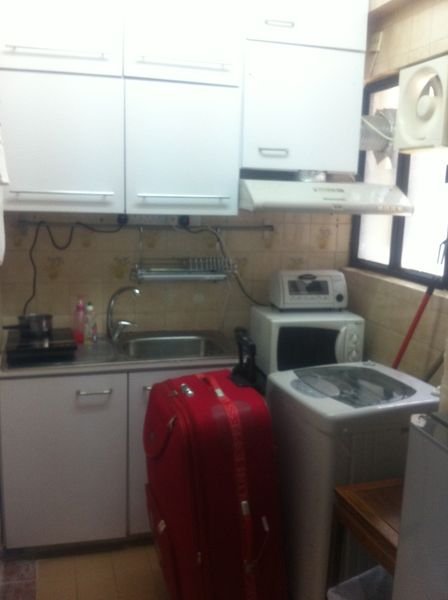 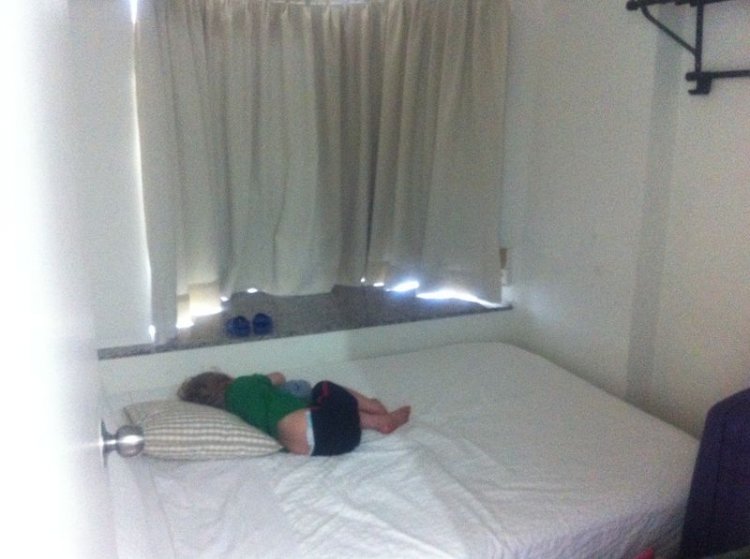 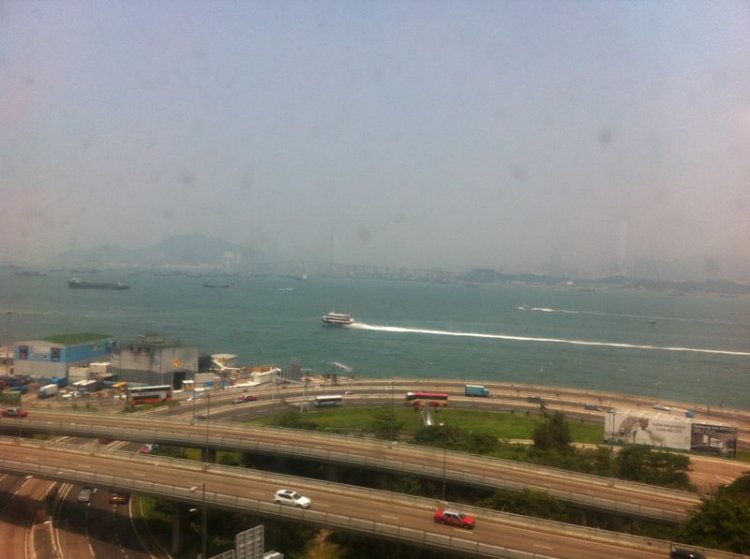 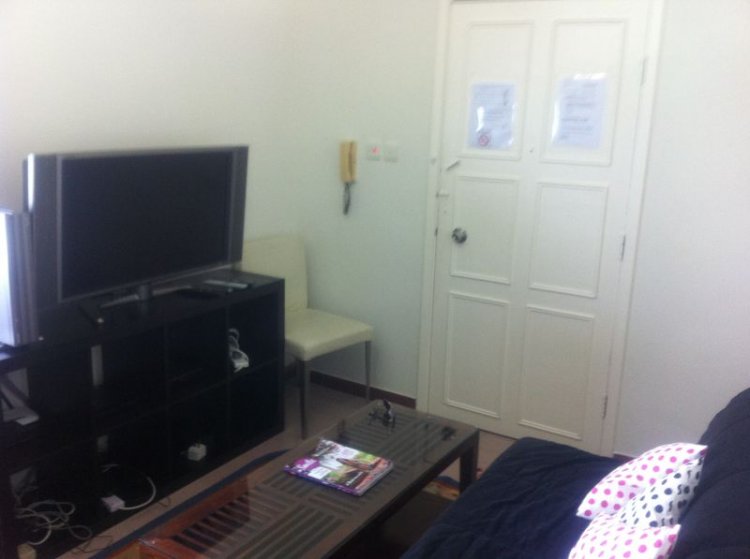 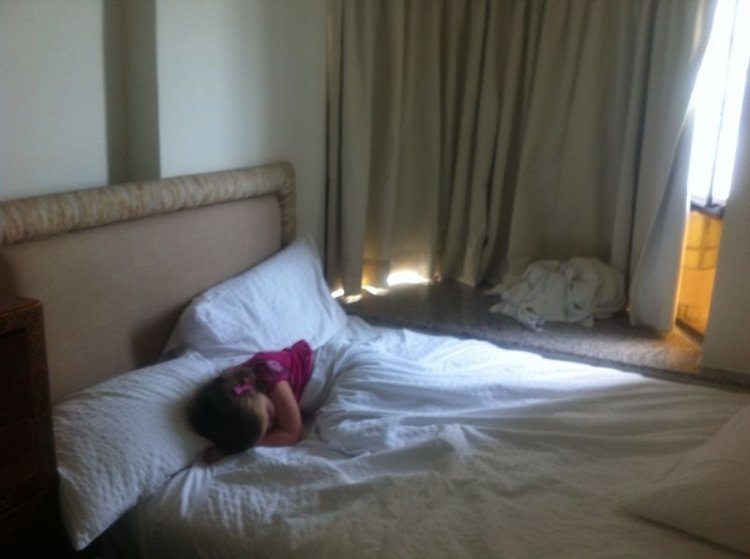 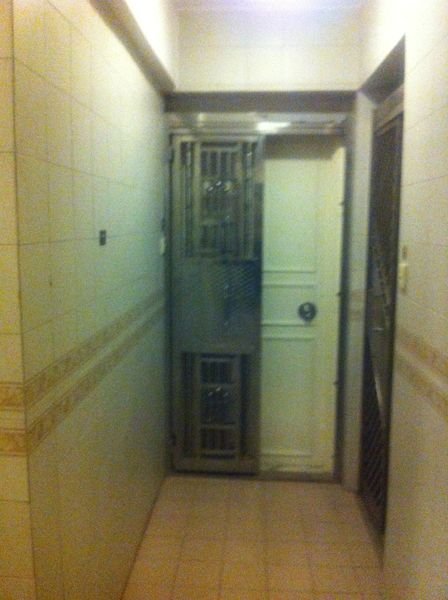 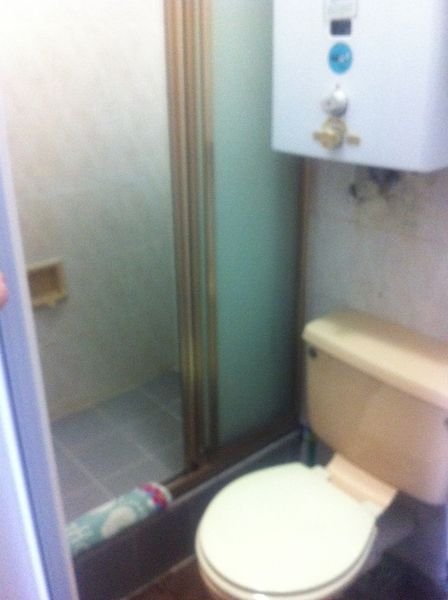 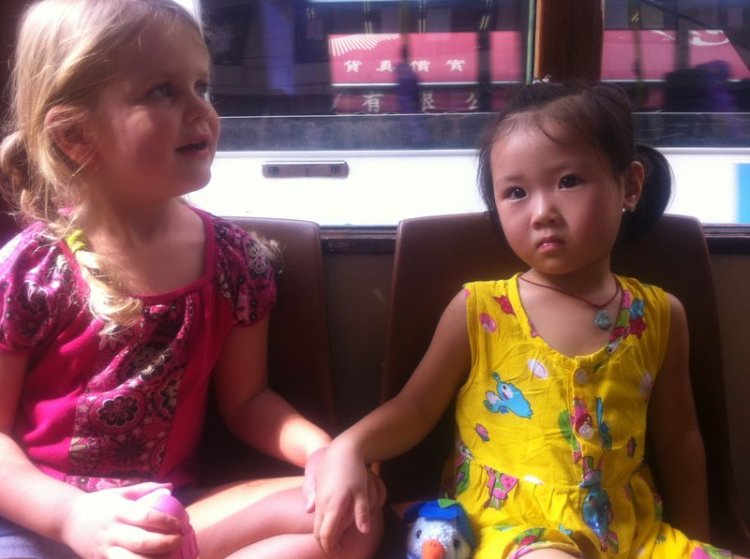 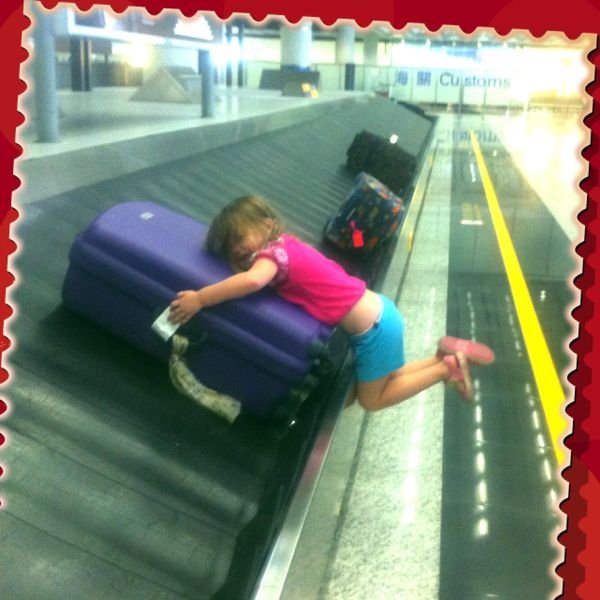 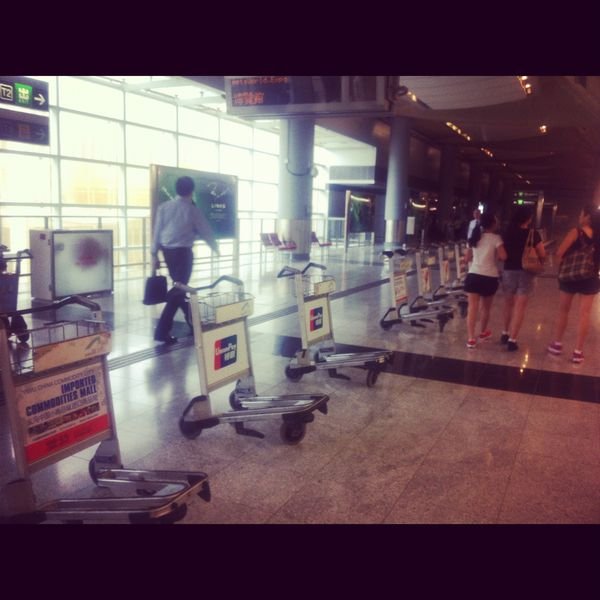 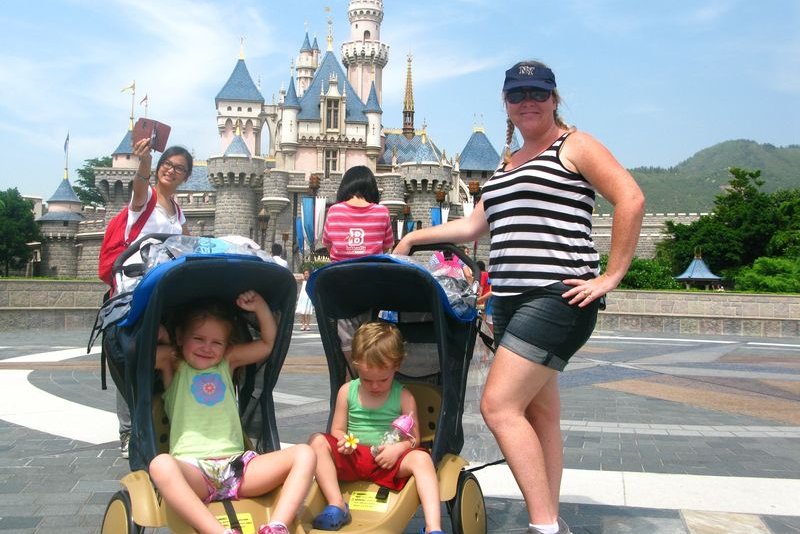 5 Things To Do With Kids In Hong Kong

Hong Kong has so many things to do. And while they may not be as child friendly as the other Asian countries if you look hard enough you can see a country catering for your little… 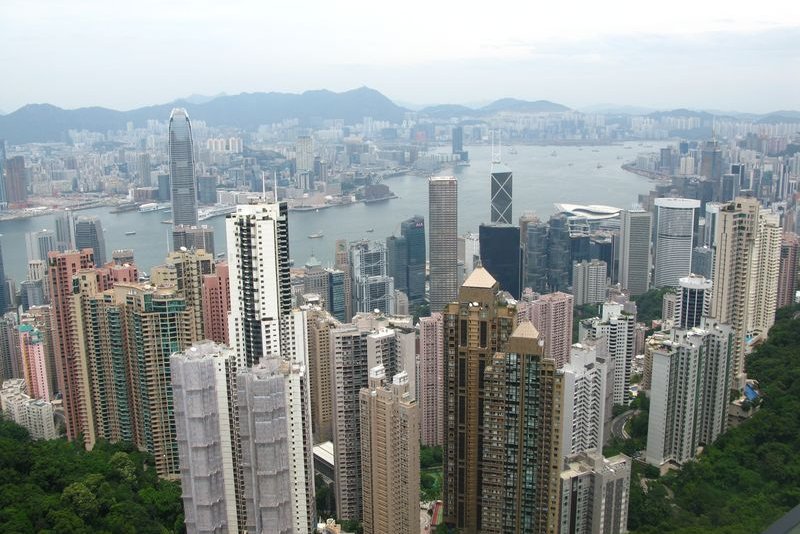 Our day & evening adventures on The Peak with its tantalizing display of twinkling lights. Our very yummy dinner at the Michelin star restaurant Yung Kee. Our hot fun at Hong Kong…

Disneyland Hong Kong: Not The Happiest Place On Earth

“To all that come to this happy place: welcome. Disneyland is your land." Walt Disney would roll over in his grave if he took his kids to Hong Kong Disneyland…. Or rather melt in… 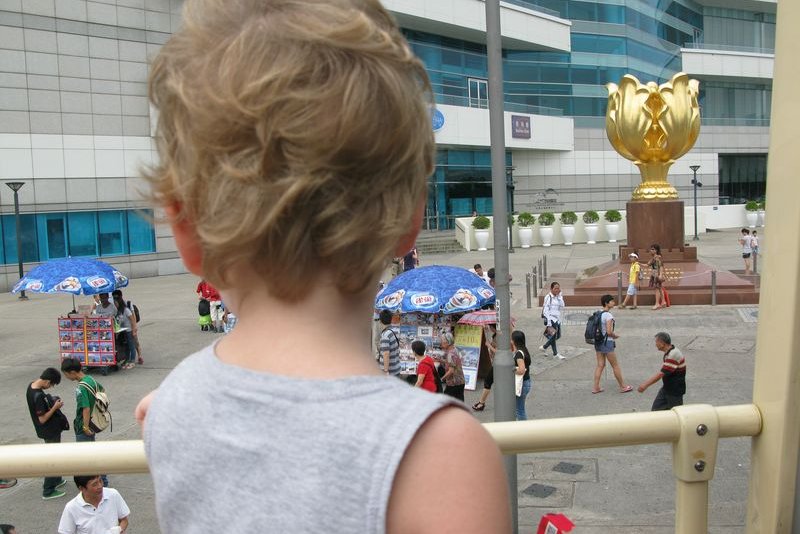 No Hop Offs On Our Hop-On-Hop-Off Bus Tour

With kids a Hop-On-Hop-Off Bus Tour is the perfect solution for seeing all the sights... You might not make a lot of stops, but you can still see everything from the open top view… 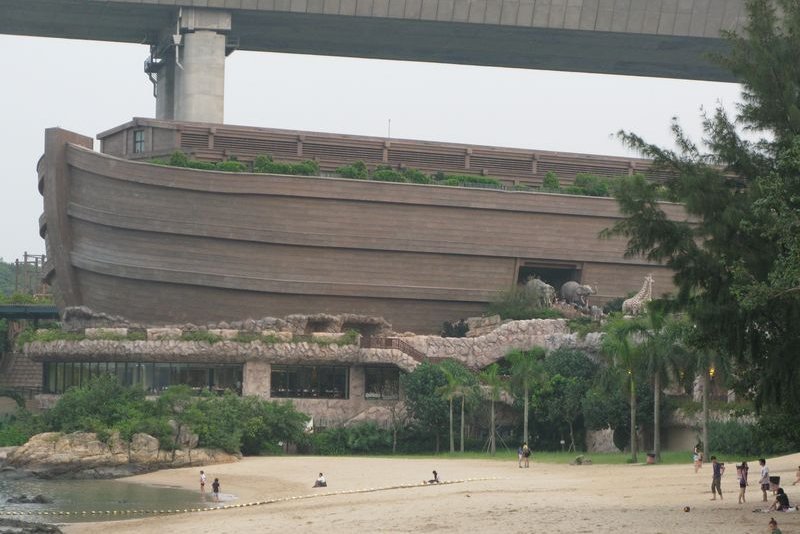 Ever Wanted To See Noah's Ark?

Noah's Ark is the newest attraction located on Ma Wan Island in Hong Kong. it is an evangelical Christian theme park and the world's only full size replica of Noah's Ark. Never…

Gosh that is the funniest photo of Mia!!!!

It sucks that the people weren't so overtly friendly in Hong Kong. I guess it's just different to the South East Asia countries that are so open and friendly and obsessed with kids.

What a tiny looking apartment!!!! We had a similar thing in Thailand with one of the beach bungalows we'd booked. Had to push the bed up against the door to the bathroom to fit the portacot and our bag into the room. Luckily the bathroom door opened into the bathroom so we could still use it. Was horrible having to climb all over each other all the time though.

I went to HK in 2006, but even then it was very much about consumerism and capitalism. I don't like that kind of thing. The things I did like about HK was Victoria's Peak, the awesome skyline and the nightlife though.

love you pic,maybe next time you should take you kids to main China ,you would find more interesting things there ...
good luck.

Hi! I know this post is old, but I just discovered your blog! I wish I had of seen this before we went to Hong Kong 2 years ago. The people are very pushy. In Disneyland hubby and I would hold hands and put our other hand on the railing when lining up to stop people pushing in. At one point someone was pushing my daughter. She was getting pretty upset. It got to the point where I ended up turning around and growling "Back the F%&* up now!" I'm sure they didn't understand English but I think my body language was enough. Another person I elbowed in the face pretty hard. I'm tall and they're all so short! I can handle being pushed a bit, but you touch my kids then hell will break loose! In saying that though some people were lovely. My youngest was two at the time and everyone wanted photos with her and cuddles! Definitely an interesting experience!!!