Gallivanting on the Golan Heights

On our second day in Nazareth we decided to do the popular Golan Heights tour. It was an early 7:30am pickup for an independent tour of Northern Israel. It wasn’t the same luxurious bus as our other Abraham Tours, but rather a taxi mini bus. Still, there was plenty of room and we hopped on. The driver barely said two words and I was quite surprised when it turned out he was not only the driver, but the guide as well. 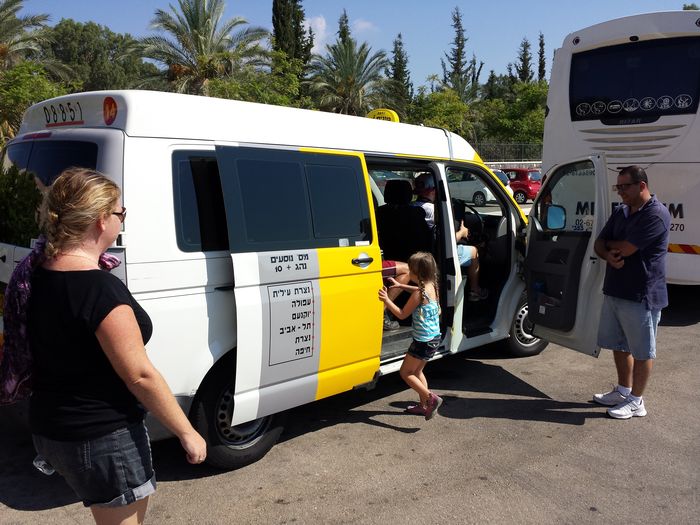 Having visited Capernaum in 2007 we knew what to expect, but a couple of the fellow travellers on our bus had no idea. Back in 2007 I was declined entry due to a spaghetti-strapped shirt so I had to swelter in the 40°C heat with my father-in-law’s jacket. This time I was prepared. However one girl on our bus with a short, strapless dress and low top, was not. As I got off the bus I grabbed a towel and a spare scarf I had brought. And sure enough at the entrance she was denied entry and gratefully accepted my spare clothes. 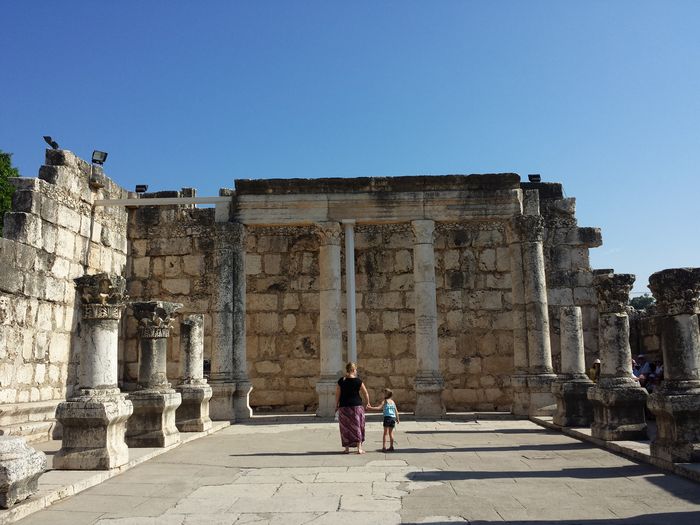 Archaeological excavations have revealed two ancient synagogues built one over the other. The town is cited to have been the home of the apostles Simon Peter, Andrew, James and John, Matthew and the home of Jesus. It is also the location of several bible stories, including where Jesus provided miraculous healing amongst others.

The site is pretty amazing to walk around and most people visit the synagogue and the ruins of St.Peter’s house that became one of the world’s first churches.

We managed to see a lot of the site in the fairly short time that we were given and hurried back to our bus. 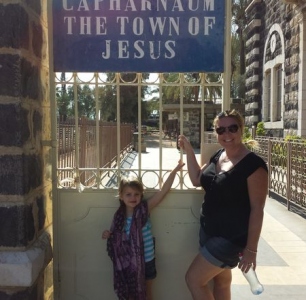 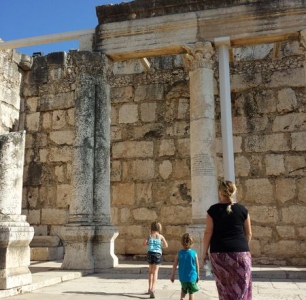 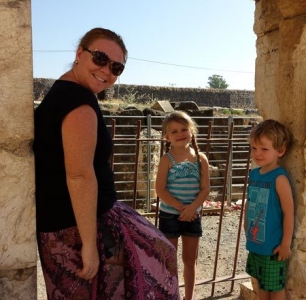 I had no idea what this stop was and I would have loved if we had been given a quick talk by the driver or a piece of paper, like our hop-on-hop-off tour. However we were unceremoniously dropped off in the carpark. My husband was using his smartphone and 4G connection to figure out where we were and it turned out this was the biblical site of Jesus’ Sermon on the Mount. While the actual location is not certain, this spot has been celebrated as the location for 1600 years. There is a beautiful Franciscan chapel built on the mount which was erected in 1938. 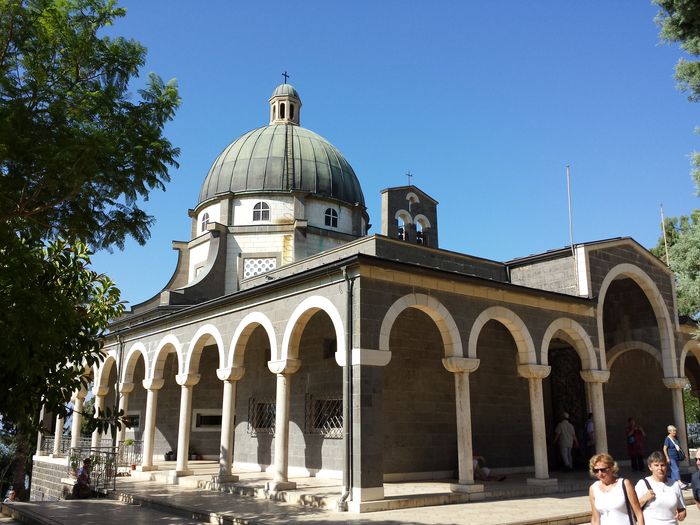 It made for beautiful photos. Inside I lost sight of my daughter and later found her kneeling next to a lady with her hands folded. I whispered quietly to ask what she was doing. She whispered back that she was praying.

“Praying for what?” I asked.

“I’m thanking God for my eyes and that I will have no bad dreams.”

She then proceeded to encourage her brother to kneel down and do his own praying, it was a precious moment. 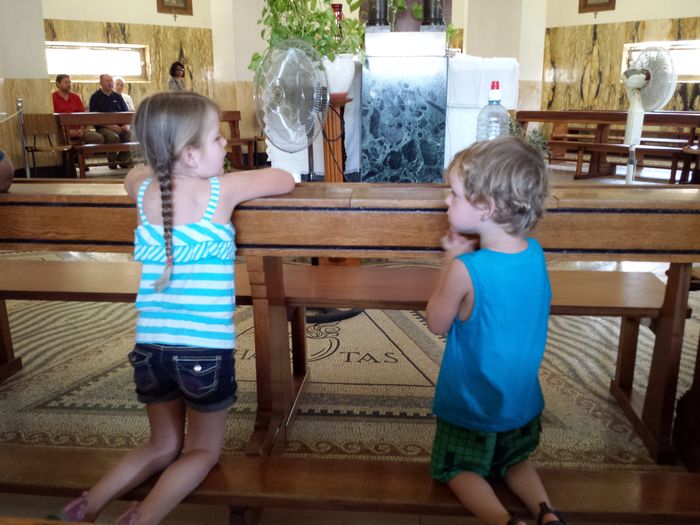 It was a quick visit and then we were back on the bus to Banias Nature Reserve. The day had heated up by now, so my husband and son got out to visit the ancient ruins of Banyan. 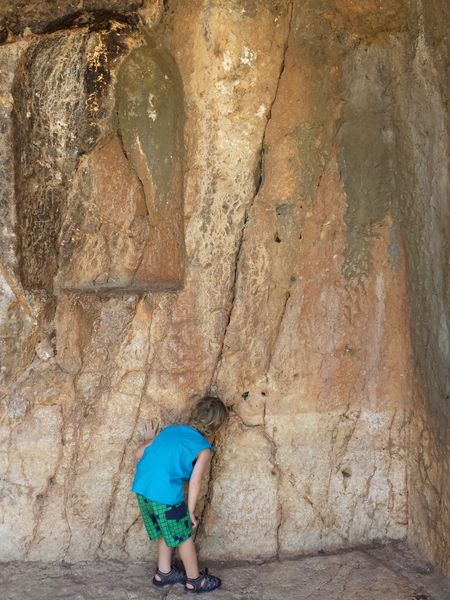 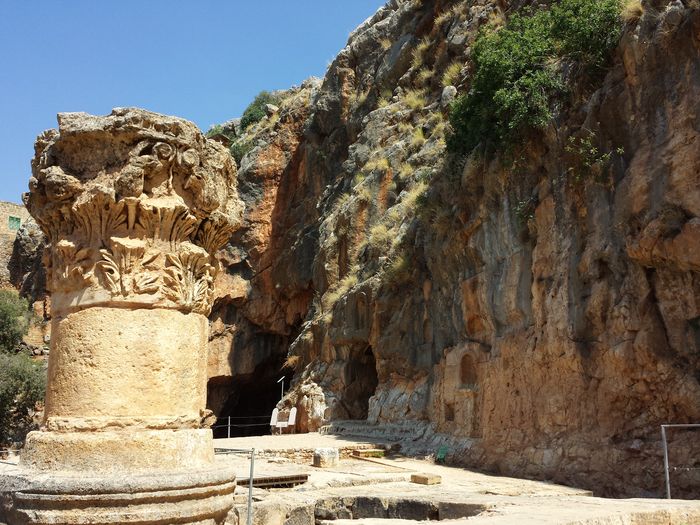 Afterwards, the bus drove us across the road where we all hopped out to take a hike to the roaring Banias Waterfall – the biggest in Israel.

The walk was quite long for the kids and when we finally found the waterfall it was torture. There was a shaded wooden walkway beside the rapids and it was beautiful, but we couldn’t reach out and touch or bathe in the cool spring and the intense summer heat felt like it was melting the flesh off our bones. 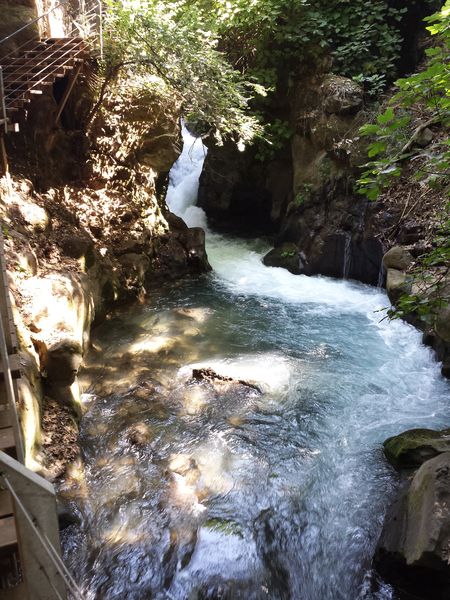 We quickly retreated back up the long, dusty trail to grab ice creams and drinks and hopped back in the bus. I would have loved to spend more time here to explore further, but more disappointing was how close we were to Nimrod’s Fortress and we didn’t get to go.

If there was one thing I could recommend on this tour, it would be adding Nimrod’s Fortress. That place is amazing! And I’d be willing to ditch the wine tasting and the beach to see that.

We stopped in a small Druze village for lunch. 40NIS ($12 AUD) for a buffet with our fellow tour guests. We got to know them quite well. It was a very funny moment when one girl thought we were actually visiting Masada, which is located far south near the Dead Sea, instead of the Druze village Mas’ada.

After lunch we were driven to a nearby winery. Not being a big fan of wine I took the kids outside to play on the grass while the others did their tastings. 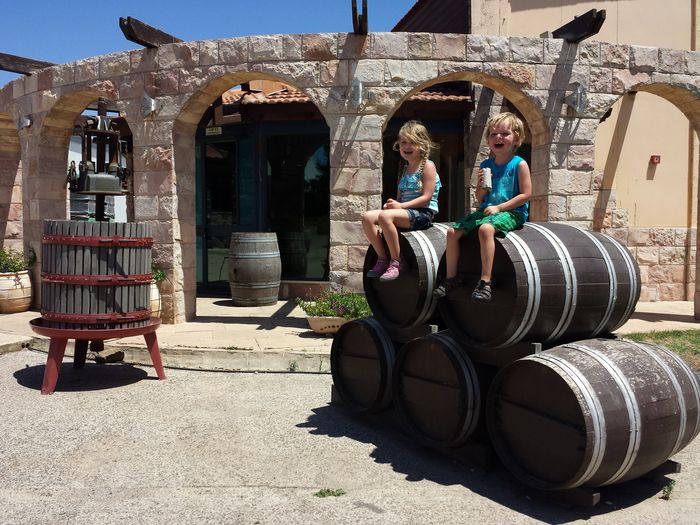 This, quite possibly, was my favourite part of the tour. Again, more information would have been great, but we did manage to tag along with a few other tour groups there to get the general gist of where we were. At the summit of Mount Bental you overlook Syrian territory. I’m told it is not uncommon to hear gunshots from the current civil war. Not only are there amazing views of the Galilee, Golan, Syria and Mount Hermon, it is also a dormant volcano with crater-like features which can be seen from the summit.

On top of that are mysterious bunkers where Israeli forces camped and fired upon approaching armies. Caius and I ventured down into the dark passageways to explorer through them. I could not imagine living there under attack. It would have been dreadful. 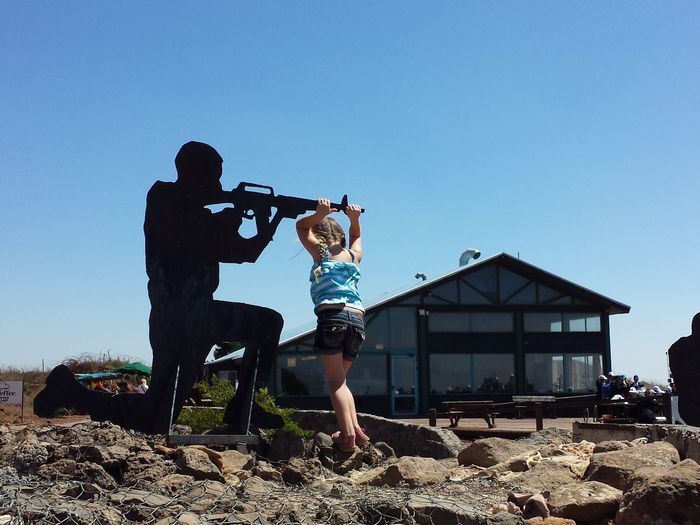 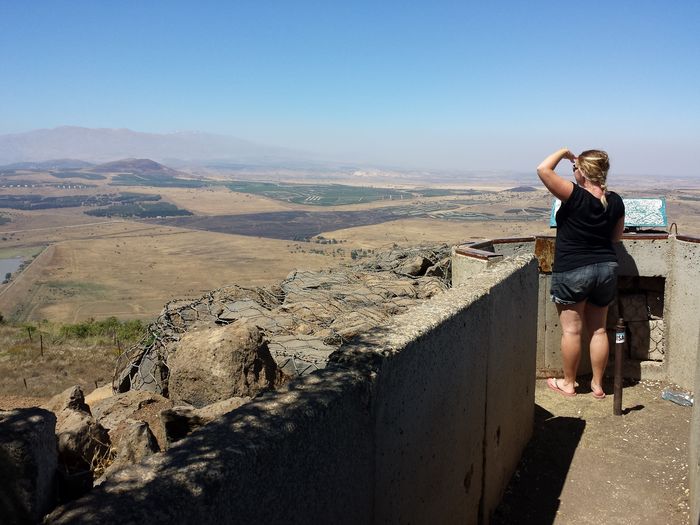 After our hot walk around the summit we finally arrived at the beach. The kids had a blast on the play equipment and even in the water despite the pebbly beach. I had a nice relaxing time sitting on the grass watching them.

It was a short visit before we were back in the bus heading toward Nazareth. A 7pm return and 2 very exhausted children meant a night in and early bedtime.

The tour fit a lot into 1 day, and I would just suggest that you do some background reading on the sites before the trip so you can appreciate them all the more. Otherwise, if you’ve got a smartphone, Wikipedia will save the day.

"I respond to every comment by private email. So please leave me comments, I love chatting to you" - Josh Bender
Posted by Karin on Aug 5th, 2013
Oh touched my heart to see those two little ones praying in the church