Nimrod’s Fortress & The Little-Known Life of Jews: Weekend In The Kibbutz

Why is a fortress that was built by Muslims in the 1200’s named after a Biblical character? Who knows! But this ancient ruin is definitely one of the best preserved icons in Israel and probably one of the most underrated due to it’s remote location. But that didn’t stop us - we had heard some great things about Nimrod’s Fortress by locals and we were on a mission to reach it. 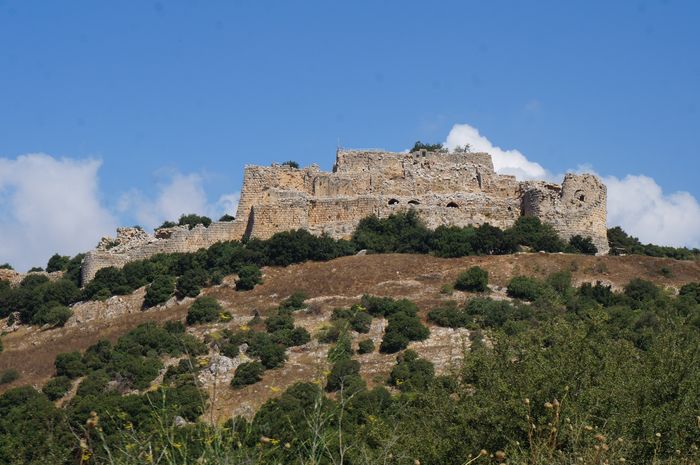 Iris, an enthusiastic reader of our blog, noticed we were in Israel and invited us to visit her family who live in a kibbutz in the north of Israel named Kfar Szold. We gladly accepted the offer and met up. She and her family were extremely hospitable and we appreciated their generosity. 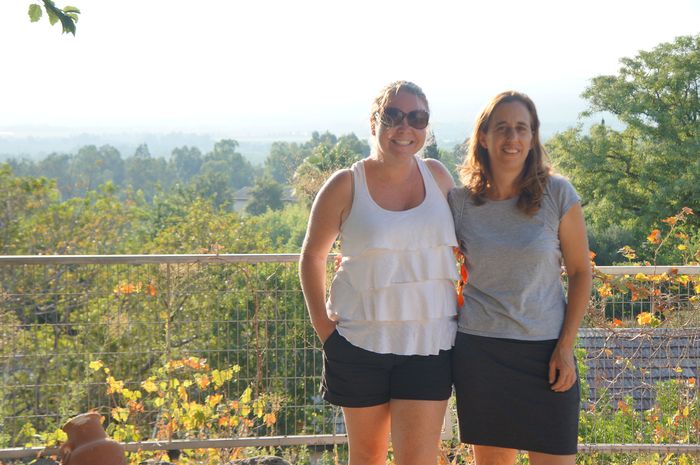 Through a friend, they organized a room for us at Bakfar guesthouse which included a tasty breakfast the following morning. 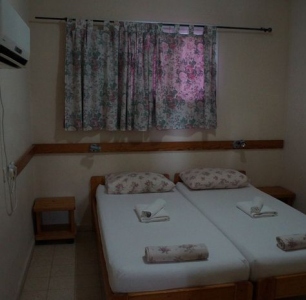 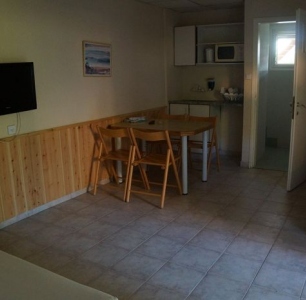 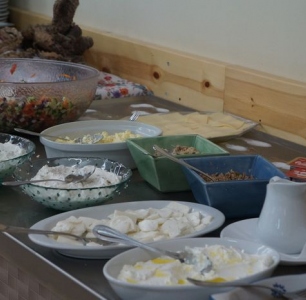 If you’re not familiar with the term, a kibbutz is a collective community in Israel, often focused on agriculture. With origins in the early 1900’s, these communities are founded on socialist ideals of shared property ownership, but in recent decades a shift towards private ownership and increased independence of the individuals have occurred. There’s a strong focus on family and social responsibility within these groups. Kfar Szold kibbutz is an ideal place to raise a family with a local pool, playground, parks, a kindergarten and school. The streets are safe, and most neighbours know each other well. Our kids had a great time, even if they couldn’t speak Hebrew, the universal language of playtime is understood everywhere. 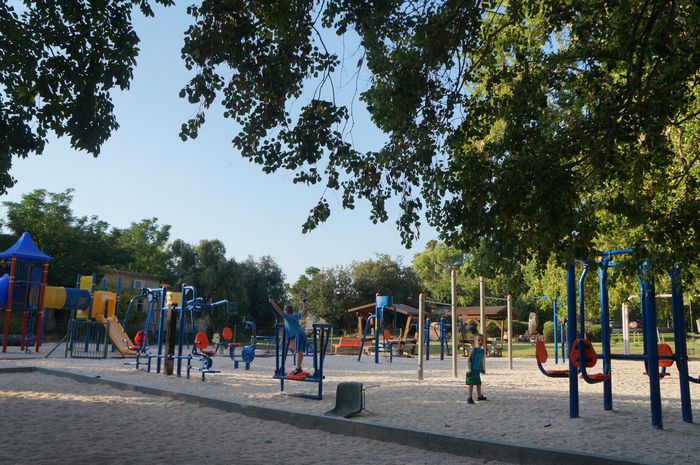 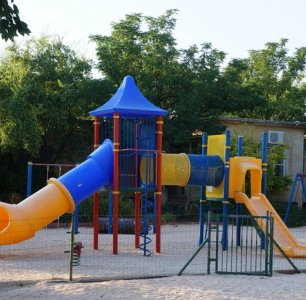 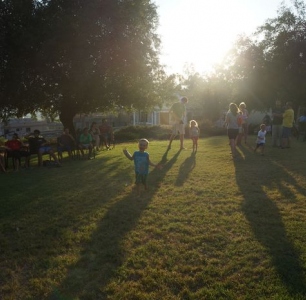 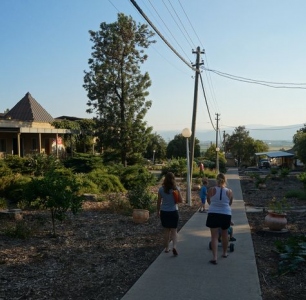 We hadn’t savored the taste of bacon or ham since arriving in Israel a month prior, and when we heard about a restaurant that served bacon hamburgers, it caught our attention. Iris took us to that restaurant for dinner, located about 10 minutes from the kibbutz, and it served some of the best burgers, we’ve had in a long time. It almost felt a little naughty eating extreme non-kosher (beef & cheese PLUS bacon) on a Saturday (Shabbat). Triple whammy! But we found out it is surprisingly easier that we first anticipated to find pork products in Israel, if you just know where to look. 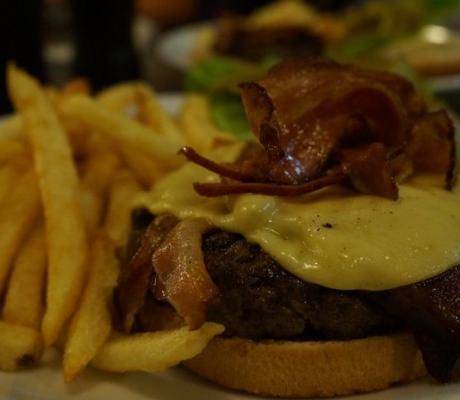 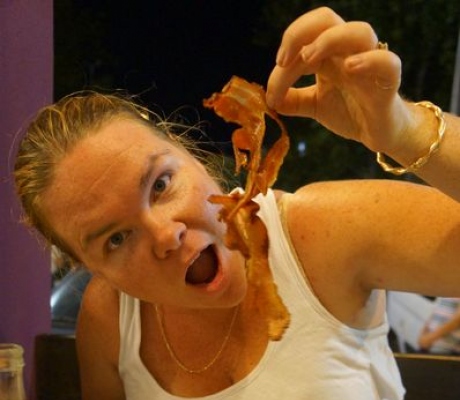 The next day we headed early to Nimrod’s Fortress located about 19km northeast of the kibbutz, to beat the summer heat. The drive through the windy roads in the Golan Heights was superbly scenic. The fortress could be seen from miles away, perched on top of a mountain overlooking the lush valley below. 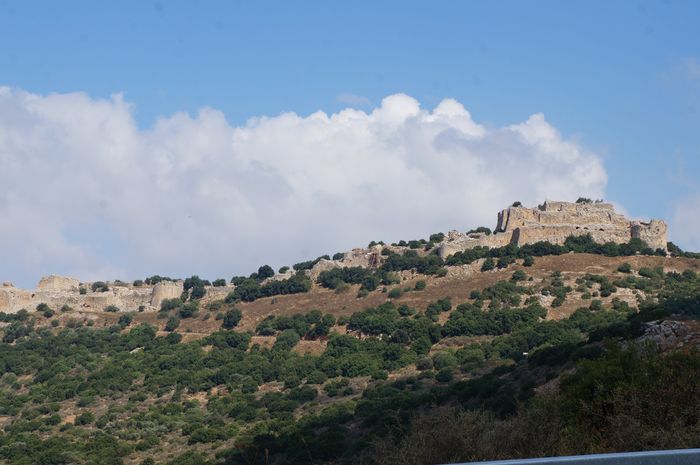 The fortress was built by the son of a sultan between 1229 and 1260 and stretches around 420 metres in length. It’s strategic location allowed it to control trade traffic to Damascus in the north, and the rocky location made it easy to defend from enemies. The fortress had been damaged by earthquakes over the centuries, but was still in surprisingly excellent condition because of its isolation. 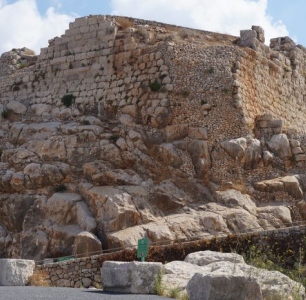 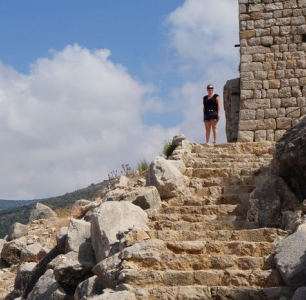 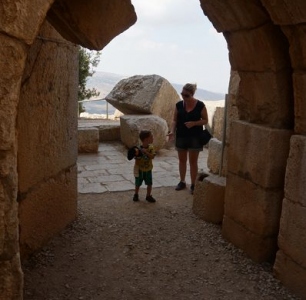 Walking the many steps wasn’t easy for Mr 3-year-old, so we strapped him into the carrier and he nodded off to sleep. The views and architecture were breathtaking and it’s easy to imagine oneself transported back to an era of crusades and knights.

There was so much to explore for kids and adults alike: spiral staircases, cavernous rooms, a cistern, secret passageways and a plethora of nooks and crannies. 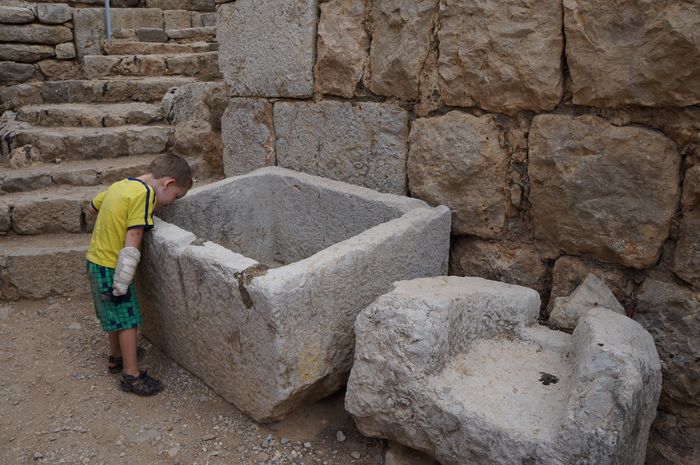 The photos speak for themselves. 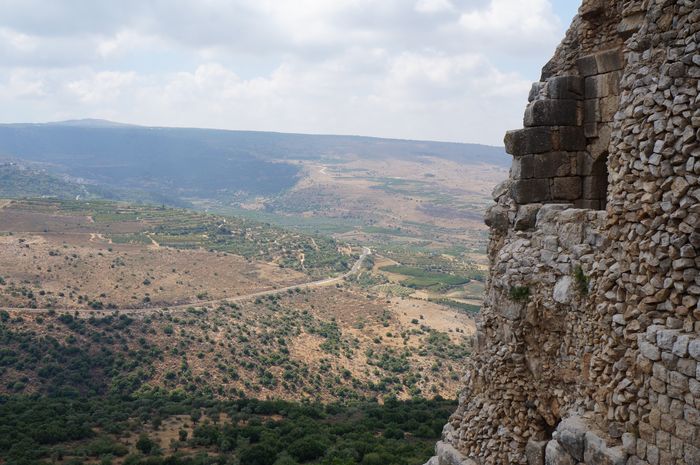 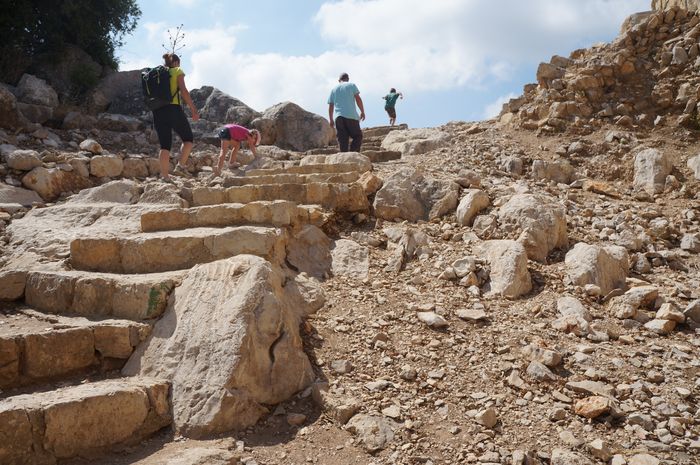 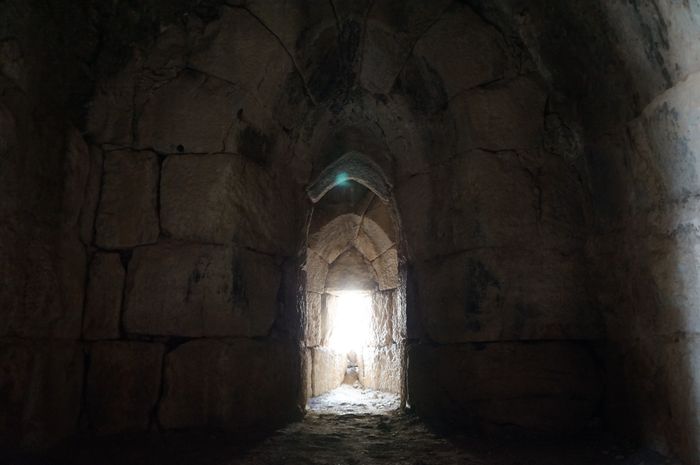 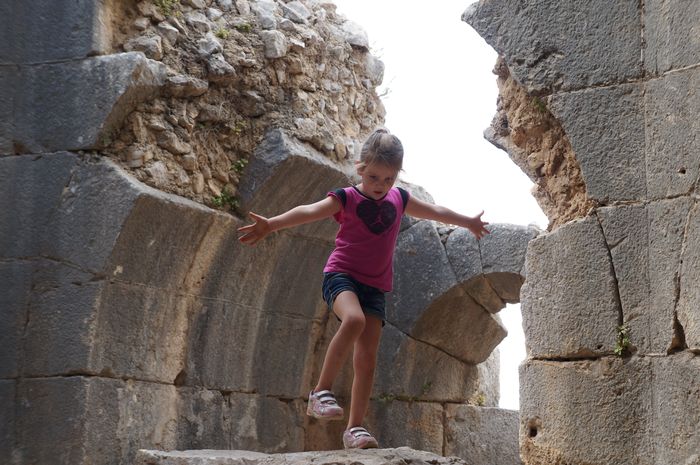 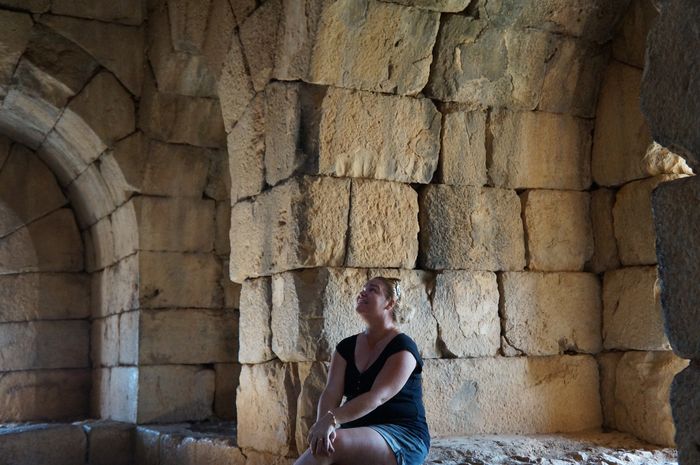 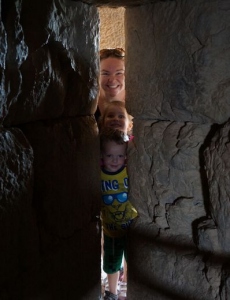 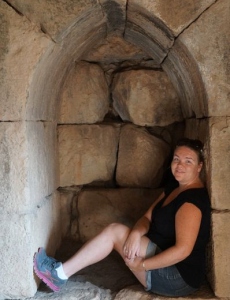 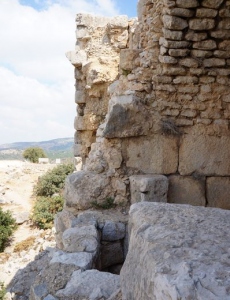 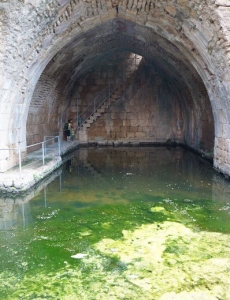 After about 2 hours, the heat finally overcame us and we retreated back to the carpark and a snack stand for cold drinks. We said our goodbyes to Iris and her lovely family and jumped into the car. 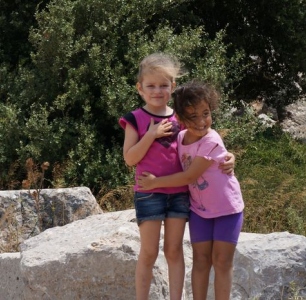 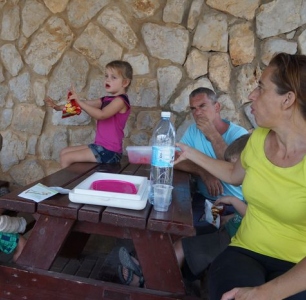 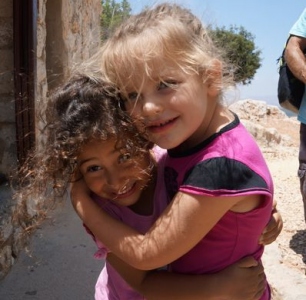 On the way back to Haifa, based on a tip-off from our hosts, we stopped at Karmiel, home to the first supermarket in Israel to sell pork products. It originally catered for Russian immigrants, but its fame has spread far and wide. After traversing the entire town for an hour and asking at least 10 different people for directions in broken English, we finally found it – Tiv Taam. To our delight, we picked up some smoked sliced ham for a simple yet mouthwatering lunch of ham sandwiches. The rest of the drive home was a pork-flavoured blur. 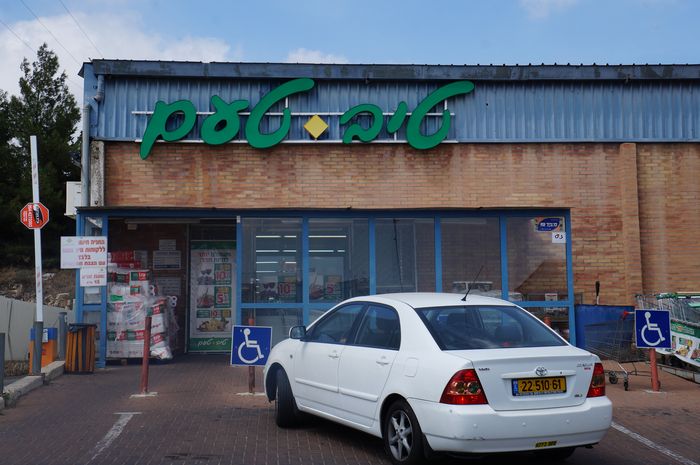 "I respond to every comment by private email. So please leave me comments, I love chatting to you" - Josh Bender
Posted by Gabi (The Nomadic Family) on Aug 1st, 2013
wow. i'm so happy that you made the effort to go. i love nimrod's fortress. now you can see why it's one of my favorite places in israel. loooooove it that you had a kfar szold adventure, met iris, and went there. one year for my birthday, i took our kids and a few others and we had a cookies picnic up there with the kids treating me like queen of the castle and singing happy birthday as it echoed across that romantic valley. loving your adventures in my homeland. loving it. i also love all the pics you post. so great. how do you do that pic collage at the end without it making the site so slow. teach me wise one. hugs, gabi
Posted by Karin on Aug 1st, 2013
Wow how amazing is the history in Israel
Posted by Freya on Aug 3rd, 2013
WoW lovely photos, looks like you had an awesome time. The fortress looks very impressive. It's so great that you got to visit one of your readers and her family, I love experiences like that.