If there was ever a land to be picked to visit for me it wouldn’t have been Legoland. We don’t own Lego, I don’t build Lego, I never even dreamed of what a town made of Lego could be. But the idea of visiting this brand new theme park in Johor had me intrigued and on impulse we decided it would be worth the flight.

AND BOY WAS IT! 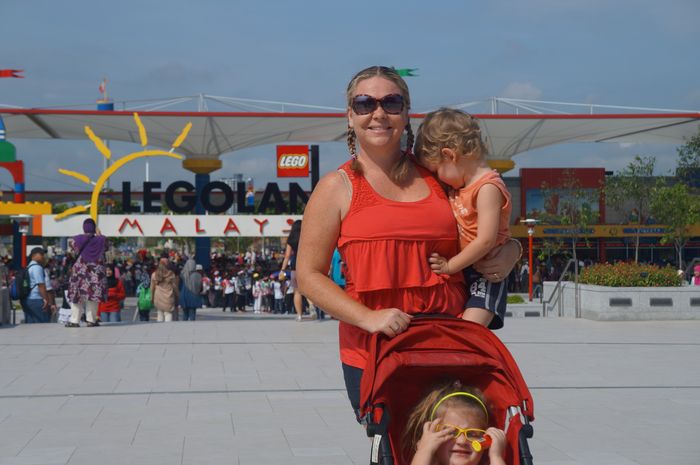 The park was a little less than half an hour from the Pulai Springs Resort. The shuttle dropped us off the front of a under covered tunnel with restaurants, shops and dozens of people. Through this wind tunnel and out the other end into the boiling hot Malaysia sun we finally spot the Legoland entry sign.

As far as Hello Kitty was concerned they were outdone all ready. Big, bright, flashy and noticeably a crowd of thousands milling around the outside waiting for the 10am opening, queuing behind those turn style gates fighting the push from further back in the eagerness to be first in and first on the rides.

We were a bit luckier. We had mentioned we would love to review Legoland on Travelwithbender.com and Legoland agreed to let us in as Media. I had phone numbers of who to call when we arrived, however I drifted to the left side of the crowd, asked one lady for my contact and guess what? It was her! What a coincidence.

While the ladies shared a little about the park with us we lathered on the sunscreen being properly warned about the hot grounds that make up Legoland. We were handed our media passes, of which my daughter politely demanded one as well, a goodie bag with great information, shirts, USB bangles, etc. and were led through a separate turn style away from the crowds. 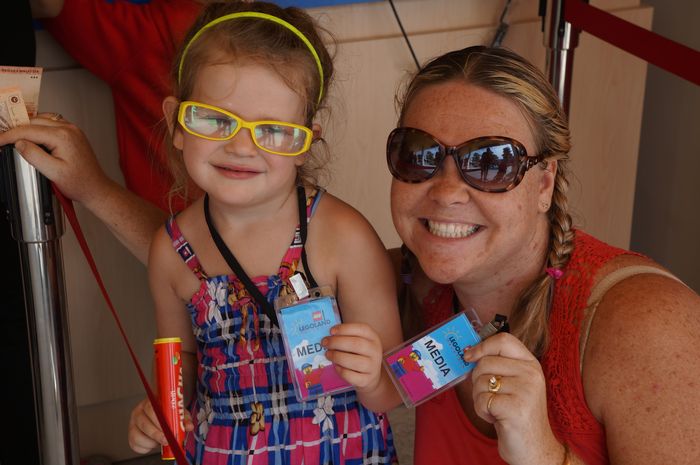 Interesting Things I Learnt About Legoland

Legoland opened in September 2012 on 76 acres and is aimed at families with children 2 to 12 years old. It is strategically located a mere 45 minutes from Singapore (realistically probably 1.5 hours) and the day trip tours are going wild. With over 40 interactive rides they won’t stop there with the waterpark and hotel already under construction with expected completion 2013-2014. We saw the pictures for the hotel and each of the 200+ rooms is a family room and themed. Pirates, princesses, you name it.

At present the park only has a 1-day ticket, but once the waterpark and hotel open we look forward to staying for more than 1 day. As it was we did not go on every ride or see everything in the park. Entry is 140MYR per adult ($45AUD), 110MYR ($35AUD) children 3 – 11 and kids under 3 are free. If you are going to go more than twice a year, get the annual pass.

This is the 6th Legoland in the world and the very first in Asia, which gives it an amazing opportunity, as we all know the Aussies, are going to be on board with it as well. As I mentioned, there are 40 rides, 3 restaurants, 4 food stands and 11 food carts. Not to mention Asia’s largest Lego shop and 15,000 Lego models throughout the park.

The park has 6 themed areas containing more than 50 million Lego pieces. In my next post I go through each land as we saw it and try and explain what immense fun this place truly is and how it’s worth every dime.

But for this post I’ll just cover our basic day. 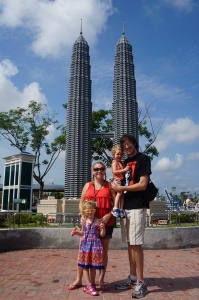 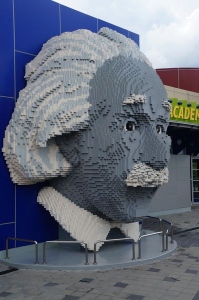 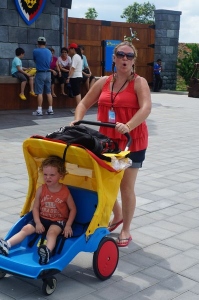 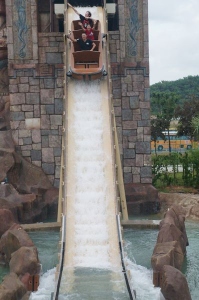 Our first visit is to the right of the entrance where there are strollers for hire. 30MYR ($10AUD) for a double stroller and they offer to hold our stroller while we use theirs. You’ve heard me mention the double strollers before, they are a Godsend. Both kids love them and they are so easy to wheel, not to mention carry bags and drinks in. I proudly label mine “Travel With Bender”. 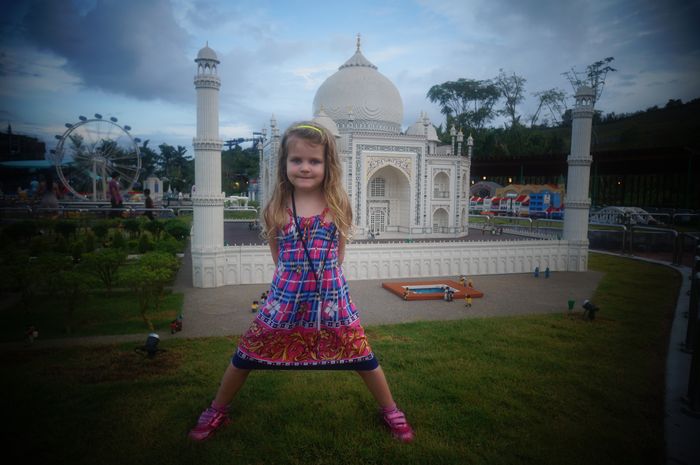 There are 3 restaurants around the park, but plenty of food carts and stands for the hungry teenager who refuses to sit. 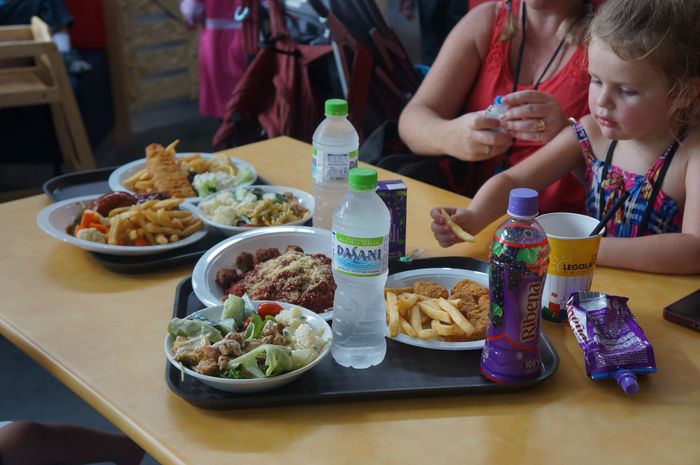 Pizza Mania – pizza & pasta lovers. They make the pizza in front of your eyes.

Market Restaurant – this is the big one where we had lunch. It serves Western & Asian cuisines in a market style concept where you browse the various stalls and choose what you want to eat. We went overboard, because of the amazing variety. We got the kids nuggets & chips, fish & chips. Then we each got a salad, while Josh choose spaghetti & meatballs and I choose chicken and vegetables. What you expect as a quarter roast chicken came out as half a chicken. Granted we did not finish everything, but clever mummy knew the kids would be hungry later so I grabbed a few paper cups with lids and stored the chicken nuggets, chips and leftover cherry tomatoes and we were back on our way.

The food stands serve anything from curry puffs to burgers & hot dogs to waffles and ice cream. The food carts serve drinks and ice creams, bags of chips and other small items. There is really no need to stop for food with such great variety, but a parent with kids will love the minute to sit down and gather some energy.

Having To Say Goodbye

We didn’t leave Legoland until it was getting dark. We returned our stroller, returned our media passes and walked through the gates back out of the park. The crowds were still milling around for the last minute photo ops and the sun was making its grand departure over the hills. Caius fell asleep within seconds of hitting his own pram and we all happily walked back through the food tunnel to our shuttle bus. 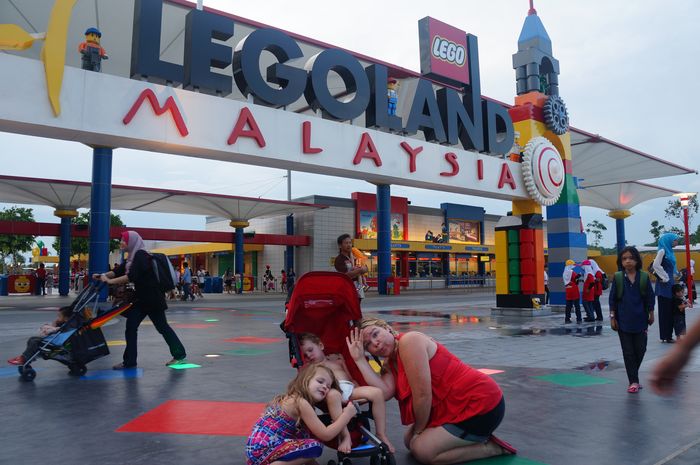 Mia was hungry so we stopped to get her a cheeseburger. She barely had one bite in the car before her eyes were closed and she hugged it to her chest in sleepy abandon. Josh pried it from her fingers without her blinking an eye and both kids happily slept the entire ride home.

Read part 2 of Legoland as we go through the 6 marvelous lands that makes up Legoland Malaysia.

There are so many more photos of our wonderful day at Legoland in our photo journal, please go check them out.