The Way is Unclear

With the only other opportunity to visit this theme park on a Saturday we made a last minute decision to attend on Thursday, the day we arrived. After checking into our new hotel, Caius crashed and I managed to get out a few posts. After 2 hours we could wait no longer and we had to wake him up.

A relatively new theme park, the cab driver had to stop for directions a few times before arriving. The signage is not yet available and even on arriving we were unsure of where to go. The cab ride from Pulai Springs Resort was just over half an hour at 40MYR (approx. $13AUD).

You have to walk around the back of a building to get to the entrance. It’s unclear and unsigned. Again I am putting this down to merely being open a few short weeks, but still, it’s a pretty important part of a theme park – the entrance and signage. We weren’t expecting anything fun and exciting just yet. 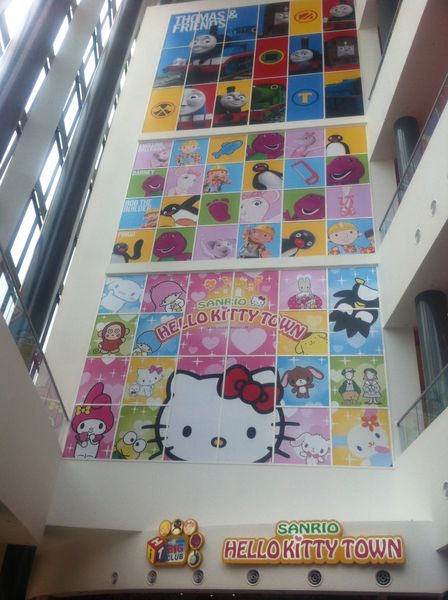 The entrance lobby was more exciting. Huge wall art of Hello Kitty, Barney, Bob the Builder, Thomas the Tank Engine, Angelina Ballerina and more. There was a roped entry set up, but no one in line as suspected by our late 2:30pm arrival. We prayed we would be able to fit it all in.

You can get Hello Kitty tickets and Little Big Club tickets for 110MYR ($35AUD), however as we were on limited time, and undoubtedly not fans of Hello Kitty, we decided to stick with one park ticket to Little Big Club 65MYR ($25AUD). Kids under 3 are free, Mia at 3 had to pay the same price as an adult.

You start on the first floor of a four-story building. On the escalators we bypassed the second floor that held Hello Kitty land. Big Little Club was located on the third and fourth levels. At the entrance was a lady taking tickets and immediately my kids were lost in a sea of children that were watching Barney live on stage. I have never seen them sit that still. Mia watching and hesitantly copying the actions, Caius just sat there slack-jawed and starry-eyed.

When the show finished Mia and Caius rushed over to meet Barney. I am annoyed that this was the last show for the day despite the events chart showing 2 more; we were informed that would not be happening today. But never mind, there was lots more to do then watch shows.

The third floor was divided into 4 worlds or rooms – Angelina Ballerina, the dancing mouse, Bob the Builder, Pingu the penguin and Barney, the purple singing dinosaur. Upstairs is another floor dedicated to Thomas the Tank Engine.

Angelina Ballerina - Star of the Show

We started in a clockwise direction and hit up the ballet room devoted to Angelina Ballerina. In this room the kids’ shoes come off (really they need to be off everywhere except the escalators) and they get to dress up. Into a tutu, some mouse ears and waving a wand they take centre stage with a big screen in front of them. Angelina then shows them some simple ballet moves and they all prance around on stage copying her.

It’s the ultimate in cuteness. Especially when your son says, “Mum, I want the dress.” So Caius gets a tutu and then I join them and we are all dancing around on the stage. A little while later we are lucky enough to have Angelina herself join us and Mia is thrilled about dancing with her on the stage. 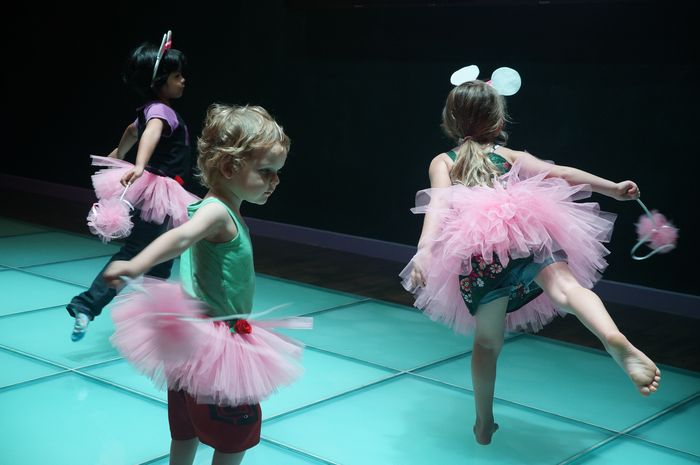 With the promise of more things we manage to heave Caius out of his skirt and onto the next world – Bob the Builder. This is a giant playground with slides, puzzle walls and machinery. The kids ran riot and our favourite spot was the puzzle walls, which can be built up and then bashed down. 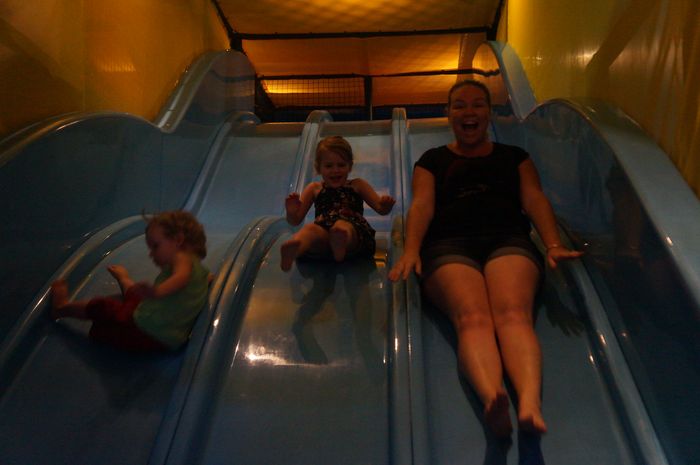 After Bob we tackle Pingu’s room, which is fairly dull. It has a basketball shooting game, like at Timezone and an air hockey table, that is all. Josh and I faced off in a bball game and I have to put it out there that he only beat me by one ball, 3 points! Caius on the other hand was bedazzled by a game of air hockey with a young girl and we have to leave him to play while we discover Barney. 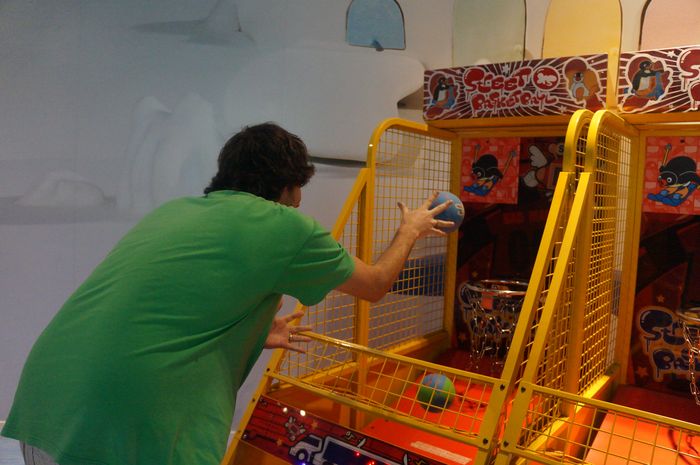 Barney - For the Wee Ones

We spend limited time in Barney-land, which is another playground before forcefully convincing Caius it was time to stop air hockey and see his beloved Thomas. It was enough to get him off and up the stairs. 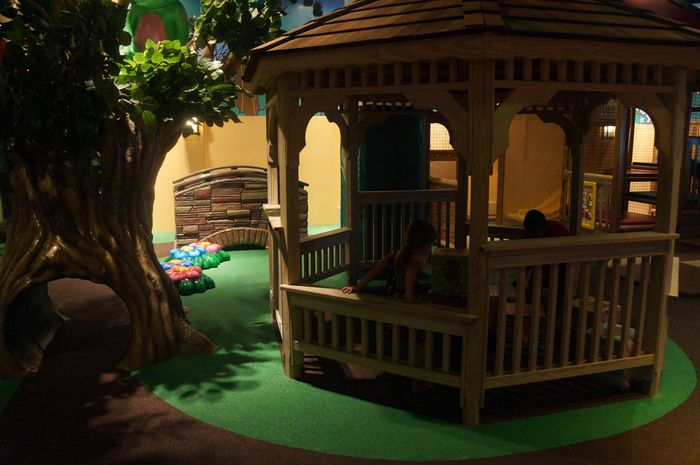 Thomas the Tank Engine - Best of All

The next level is all about Thomas and rides. There are 6 rides on this floor, from flying helicopters to gravity-dropping rides to bumper cars, train rides and mini ferris wheels. There is also a café/restaurant serving junk food and another even bigger multi-level playground.

As it was the end of the day the kids did not have to wait for any rides and got a go on all of them save the bumper cars, which were under maintenance. This one below was Mia's favourite and I lost track of how many times she went on it. 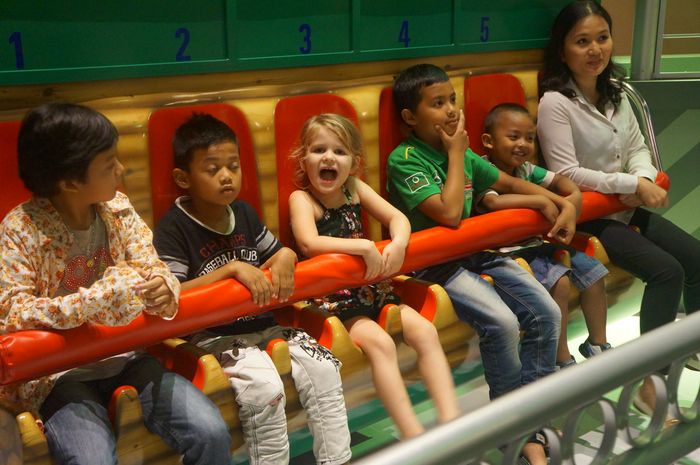 While I was in the bathroom my husband had taken the kids into the playground. When I came up to him he yelled at me to hurry my 3 year old was stuck. I could here her screaming to get her out. Josh threw our son into my arms and went looking for her in the playground. When he emerged with her she was in tears running to me and crying, “I’m so sorry Mummy I pooed my pants.” My daughter has been toilet trained for over 1.5 years so she was devastated about being stuck and needing to go.

We managed to get her to the bathroom, chuck the offensive knickers in the bin and clean her all up. The shorts were a no go and there was no spare underwear. Luckily her shirt was dress length and I had the mummy talk with her about being a lady when she left the bathroom so now one could see she was missing underwear.

Very self-consciously she went around the rest of the park, constantly pulling her dress down and deliberately always making sure she sat with closed legs.

The emotional strain and fear of discovery was too much and soon she begged to go home. We had covered the whole park in 3 hours and were happy to oblige. 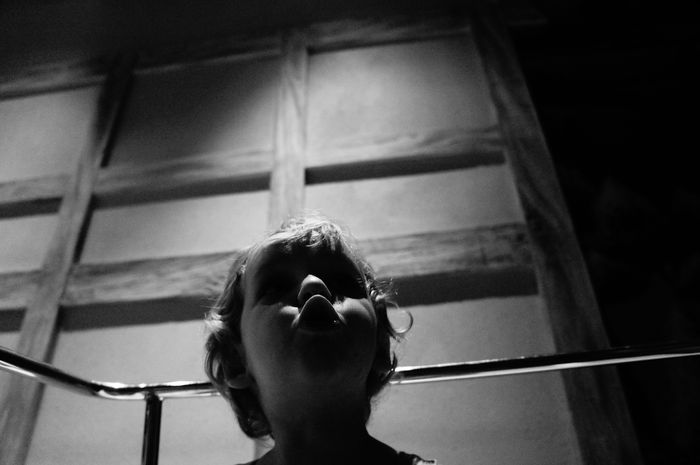 Back down the escalators, through the compulsory gift shop, found at every attraction, and into a downpour. It was raining, hard.

A taxi was easy to find, however our half hour journey home was a lot longer because of the traffic and rain. Roads were flooded, some roads even closed as our taxi driver made u-turns on impassable roads and it was some $25 later our cab dropped us back at the resort.

Would I go again? Probably not. Would I recommend you go if you haven’t been before? Yes. It was a decent day out and the kids seemed to be thrilled with it all. Especially my daughter with the ballet room, which she went back to three times during her visit. But it is one of those places that once you have seen it, you probably won’t ever need to see it again. And the relatively high entry prices means that there’s plenty of other things to do with your kids in Johor, which are, better value for money.

"I respond to every comment by private email. So please leave me comments, I love chatting to you" - Josh Bender
Posted by Michele @ Malaysian Meanders on Nov 11th, 2012
If my kids were 5 years younger, we would have visited here. My son LOVED all things Thomas when he was younger.

Your poo calamity reminded me of something back in Texas. Our playgroup of 3-year-olds were at an inflatable bounce house place. My daughter's friend accidentally poo'd (and leaked) before heading down the slide. One by one, all the other girls slid down right after her and over her poo. You can imagine how all the mommies felt when all the kids emerged with a big smear on their behinds. Yikes! I was so glad that my girl wasn't hanging out with her friends at that moment. I was the only one who didn't have to do a clean up.
Posted by little big club on Oct 1st, 2014
Wow this is nice what other rides did you try?
It seemed you were busy and did not had the time to take more photos?