Looking up at the legendary “Treasury”, the intimidating hand-carved façade shaded from the scorching mid-day desert sun by the surrounding sandstone cliff, it was easy to understand why it belonged in the New Seven Wonders. One word could only describe it: wow. 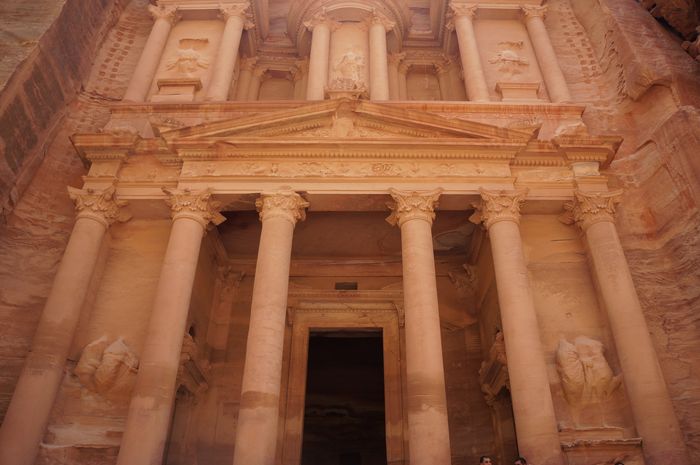 The morning started at 7:30am… or at least it was supposed to. We were still sitting in the hotel lobby waiting for our tour driver at 8:15am and wondering where he had gotten up to. We had been warned in Israel that the “Jordan side” of the tour wasn’t always executed to the same standard as we had come to expect in Israel, but eventually the driver turned up. It seemed the first person he picked up at the Israel-Jordan border took a long time to get through immigration. Anyway, we were eventually on the road.

We had stayed the night at the My Hotel in Aqaba, Jordan just a short 15-minute drive from Eilat, Israel. It was a very comfortable hotel, and much nicer than we had expected for a 3 star. The first thing that struck us was the cheaper costs compared to Eilat. A late-night room service dinner only set us back around US$15. We stayed in a family suite so the kids had a room to themselves, and we could enjoy a movie on the laptop in the living room. The included breakfast the next morning was very tasty, with a range of fruits, local salads, cereal and freshly made eggs by the chef. 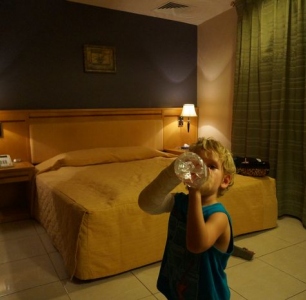 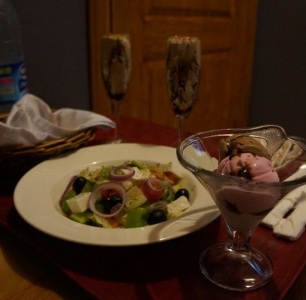 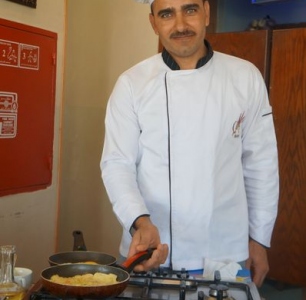 The Jordanian government tries to encourage visitors who come to Petra to stay longer in the country and explore it further by discounting the park entry fee when staying overnight. So often you can get a hotel plus tour for a similar price as just a 1-day tour out of Eilat.

The previous afternoon we had crossed the border into Jordan. The driver turned up 5 minutes early to our hostel, a little grumpy that we were not waiting outside for him, and then continued on to pick up 1 more tourist at another hotel. Once we reached the border, he explained how the process would work and walked us to the entry gate. We went through several security and passport checks and made it through to the other side to meet our Jordanian contact. The other tourist we were with got delayed as he received the 5th degree. While we waited for him we checked out a Jordanian gift store, which provided air conditioning, an essential commodity in the sweltering weather. Eventually we were reunited and crossed through the Jordanian border control and onto the minivan waiting for us, which whisked us to My Hotel for the night.

The drive to Petra the next morning was relatively uneventful, although the jagged mountain landscape was picturesque. We stopped at a large tourist gift shop to meet up with several other minivans and meet our tour leader. After a toilet break, we continued onto Petra.

Onsite, the tour leader explained the timing of the tour and what we should expect. His English was excellent and he did a good job of keeping everyone together in the group. We had read previously about the so-called “free” horse and donkey rides near the entry of the Petra Archeological Park. These guys claim that your entry ticket includes a free ride only to stop you 20 metres later and “request” a tip – some tourists are scammed up to US$60, even though $4 should be fine – so we didn’t even want to bother having to deal with that. On top of it, we felt sorry for the animals that had to work under such arduous conditions. Some animal rights groups claim that these animals are mistreated. 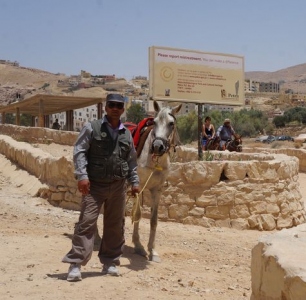 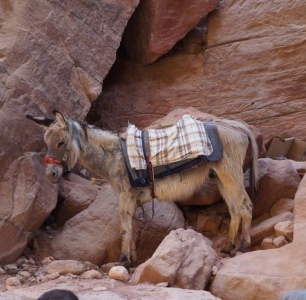 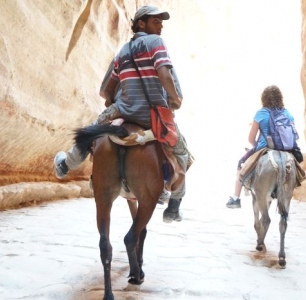 The guide walked us down a winding path towards the steep, narrow gorge, stopping regularly to explain the rock sculptures and caves with vivid detail. 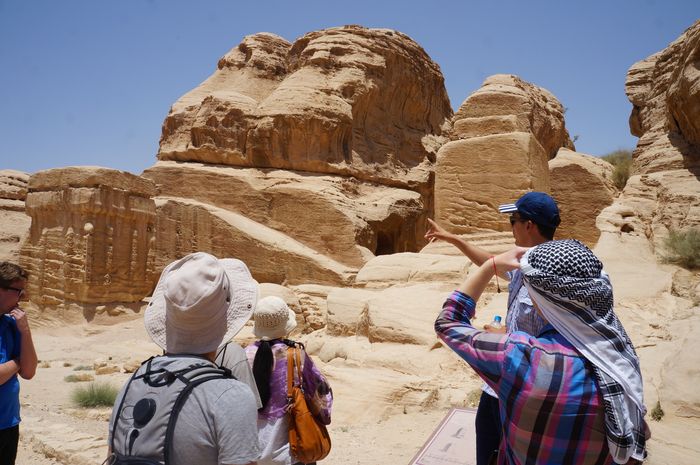 It was easy to imagine what life would have been like living here with the Nabataeans (312BC to 363AD). The kind of engineering feats they accomplished were simply remarkable. The water channels hewn into the sandstone transported water from fresh waters springs to the centre of the city and dams collected and stored rainfall during winter. This enabled the ancient city to flourish in the middle of a desert. 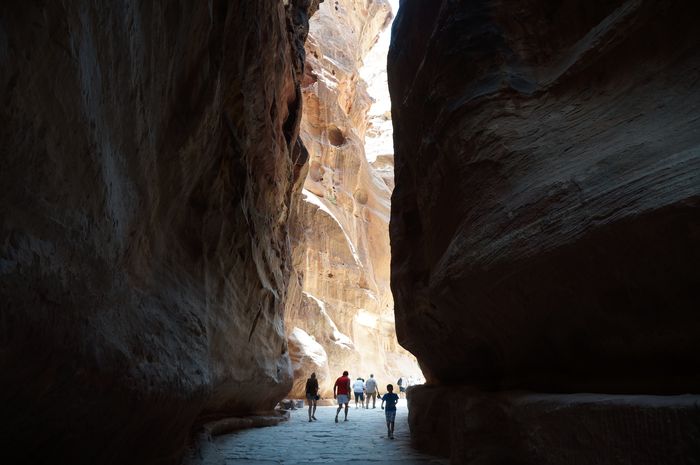 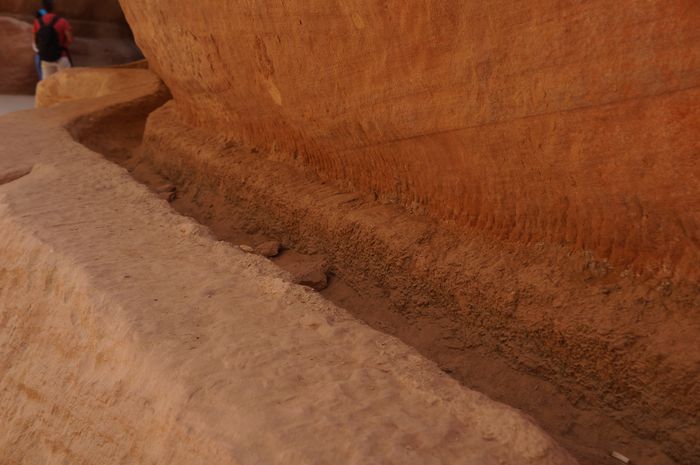 The steep rose-hued walls cast shadows that provided respite from the hot sun. Miss 4-year-old impressively walked the entire trail, 2 hours from start to end. Mr 3-year-old, with a recently fractured wrist, was carried by daddy most of the day. Several Bedouin children regularly circled us trying to sell postcards and other tidbits we weren’t too interested in, but they were also amusing, sporting curated American accents calling out “14 postcards for 1 dollar”.

By the time we had reached the end of the gorge we were chomping at the bit to see the spectacular vista we all came there for. Through the twisting cliffs we were able to catch a glimpse of the tall pillars dominating the exterior of one of the most widely recognized ancient structures in the world. The path opened up to a wide open sandy area littered with camels, donkeys and strategically-placed gift stalls. And behind that all towered the “Al Khazneh” also known as the “Treasury”. This name is due to the fact that when it was re-discovered by Western archeologists, they found coins strewn around the site. 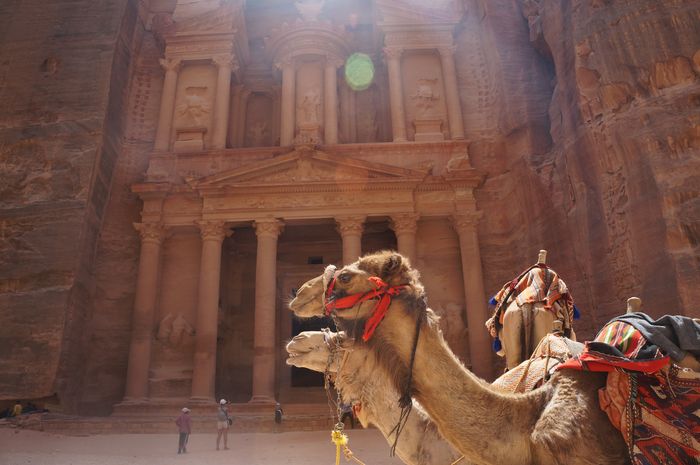 We pressed on to see the rest of the incredibly carved walls, caves and structures in the city.

Once we reached the Urn Tomb, the guide left us to explore ourselves, however instructed us to be back at the entry in 1 hour, so that only left a short amount of free time. The kids were particularly worn out by this stage, wilting like delicate flowers with rosy cherub cheeks. So Erin, Mia and Caius jumped into a horse-drawn carriage with a costly tourist price tag of US$35. We had strived to avoid using them, but it just wasn’t possible, in the mid-day 40+ degree heat, to walk all the way back – uphill. The driver was very sneaky trying to drop off Erin at the half-way point so he could turn back and make more money from other tourists, but as you can imagine, she held her ground and compelled him to continue. 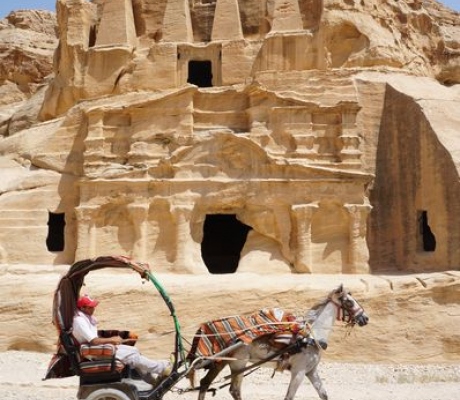 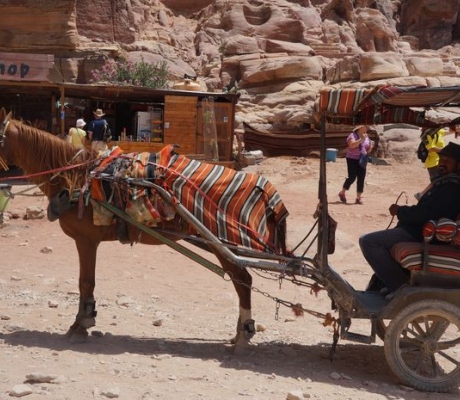 I walked back slower catching some stunning photos along the way. 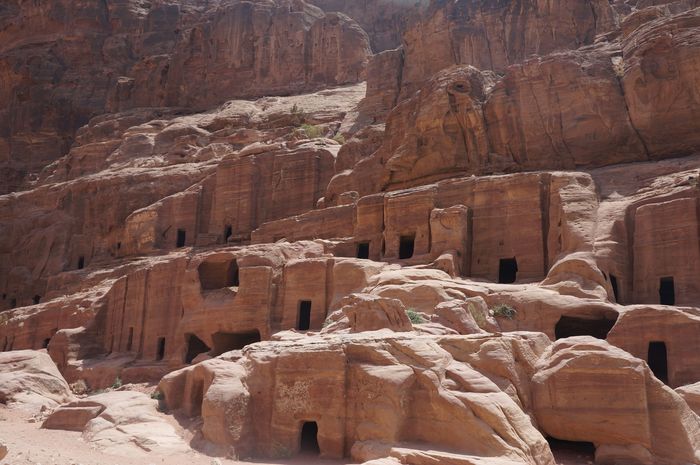 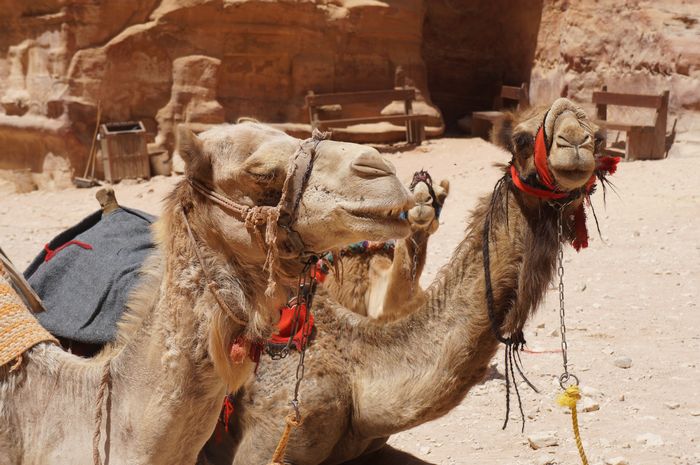 It wasn’t so noticeable on the way down, but on the way back to the entry point, the gentle ascending slope on the pathway felt amplified by the sizzling dry air. The visible results were flowing streams of salty sweat from every possible bodily source.

Finally, back at the entry we met with the others in our group and piled back into the minivans to the organized lunch located in a restaurant perched at one of the highest points in the modern town of Petra. The food was a typical tourist buffet with plenty of variety but slightly lacking on the quality, although the air conditioning was very welcome. 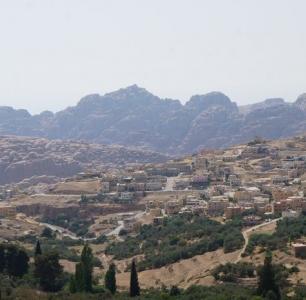 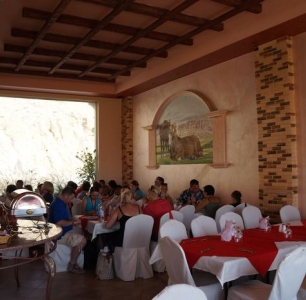 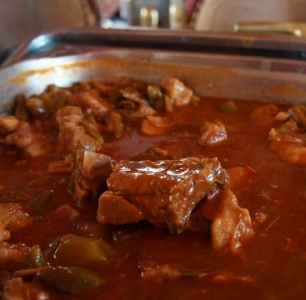 1 hour later, with full bellies, we walked back into the air-conditioned minivan for the 1.5-hour ride back to the border. Once back on Israeli soil, we were returned to our pick-up point and farewelled the driver. Mia noticed within seconds that she had left her favourite pink teddy bear on the bus. Hurriedly, we tracked down the phone number for the driver via the front-desk staff of the hostel and 5 minutes later Mia was reunited with her lifelong plush cuddly friend. Smiles all round.

The overnight Petra tour from Abraham Tours is 910 Israeli Shekels (US$255) per adult, with a discounted rate for children, which includes Aqaba hotel, transport, Petra entrance fees and buffet lunch. The entry visa (border crossing) fee was US$62 per person (even children). So while it certainly isn’t a cheap tour if you’re on a tight budget, by far it is worth every dollar spent and something we will never forget.

During our stay in Jordan we stayed at Aqaba Hotel. For the latest prices on hotels in Aqaba please click here.

"I respond to every comment by private email. So please leave me comments, I love chatting to you" - Josh Bender
Posted by Karin on Jul 30th, 2013
Wow what amazing experience
Posted by Rachel on Feb 4th, 2016
Great post and fantastic pics! We travelled to Jordan at the end of last year and Petra was such a magnificent place to see. We agree with you that it is certainly a day that we will never forget.
Posted by Amanda on May 31st, 2016
True, it isn't the cheapest thing, but WOW! For all you get for $255 plus visas fees, that isn't actually that bad for an amazing historic experience. I might have to try this!