Picking up our Jucy campervan

I did not want to leave the Huntington lavishness, but it was time to say goodbye. A taxi was hailed and it was a mean $111 to get to our next destination, across one of the longest bridges in the world.

When we arrived at the shop we could see the beautiful green vehicles lined up and I felt giddy – what a display! We went through all the paperwork, agreeing to extra insurance at $9 per day and receiving our personal kits (blankets, sheets, towels), as well as pillows. We were taken outside and given a run-down of the vehicle and where everything was and how it worked, before being handed the keys. 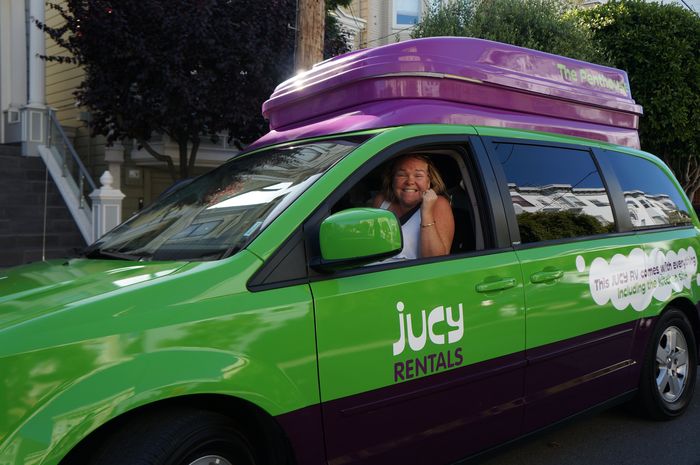 It took longer than I expected, so please ensure you have enough time. We had a 2:30pm appointment that we didn’t make, however they were happy to change it to later for us. With some extra time up our sleeves we headed straight for Walmart to find a carseat and supplies.

It is always best to buy a carseat in the US then take the hired one from the car rental companies. I am not sure what Jucy charge, but from pervious rental history it was about $25 per day. The carseat we bought at Walmart cost us $30.

Finishing with our noodles and carrot sticks we decided to see some more sights of San Francisco we missed and headed back over the bridge to return to San Francisco.

The Crooked Street is, well crooked. It’s a steep decline that zig zags all the way down. Josh jumped out at the top and walked down while I took the car down. Not only did I get lots of attention in my bright green van, but also Josh had plenty of time to keep up and take photos. What a crazy street. I could not imagine living on this street. 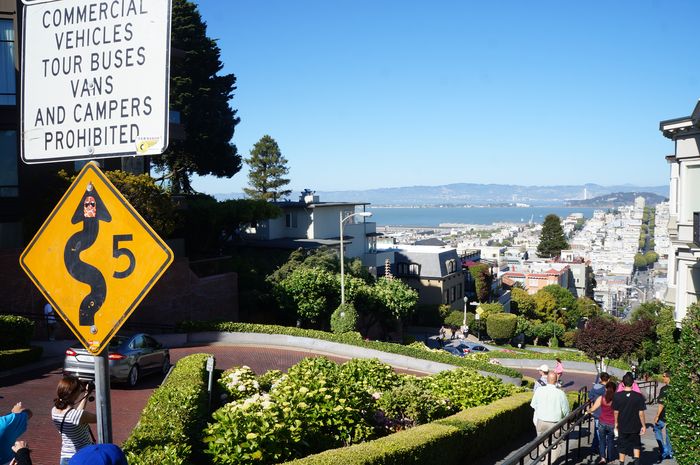 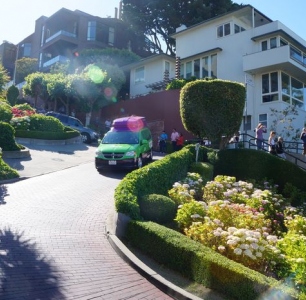 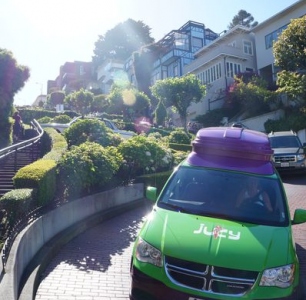 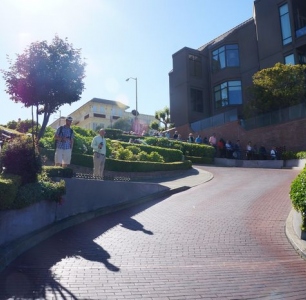 After that we drove to see the house façade of one of my favourite TV shows of my tween years, “Full House”. No John Stamous around, but a nice reminiscent visit anyhow. It's the one with the tree in front of it, which of course was not there during the show. 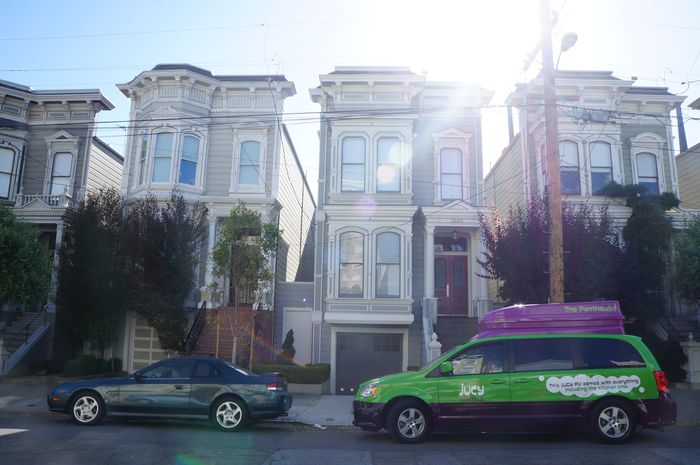 We found the Dome and a beautiful area to photograph the bay before finding a parking lot $10 flat rate, parking our car and heading to Pier 39. 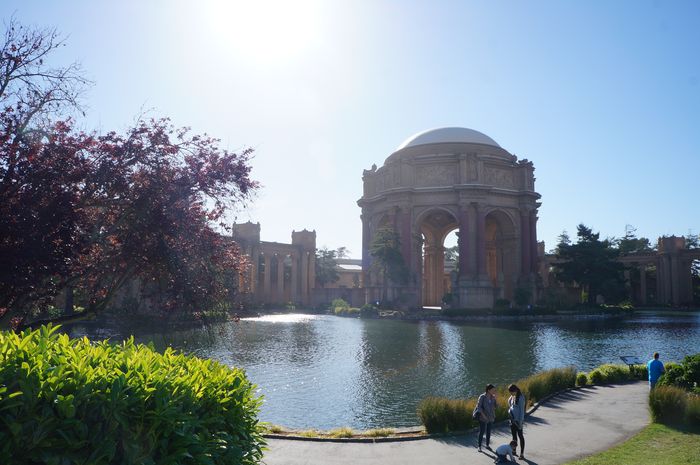 On Pier 39 is a 55-foot catamaran departing several times a day for a tour of the bay. We had booked directly via their website and were so thrilled to be boarding. Tickets vary depending on the time of day from as cheap as $35 or for the sunset cruise $50 per person, no discount for children. It includes the most amazing 1.5 hour cruise and 2 drinks from the bar, plus snacks. 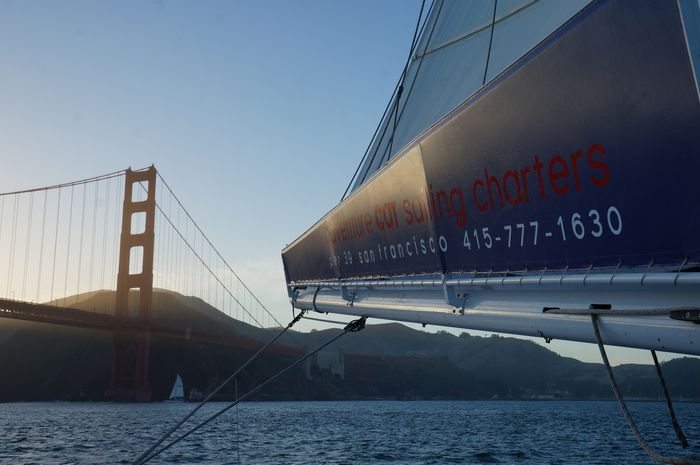 The catamaran was already filled with passengers and we all joined inside for a word from the Captain. After he had finished we set sail. 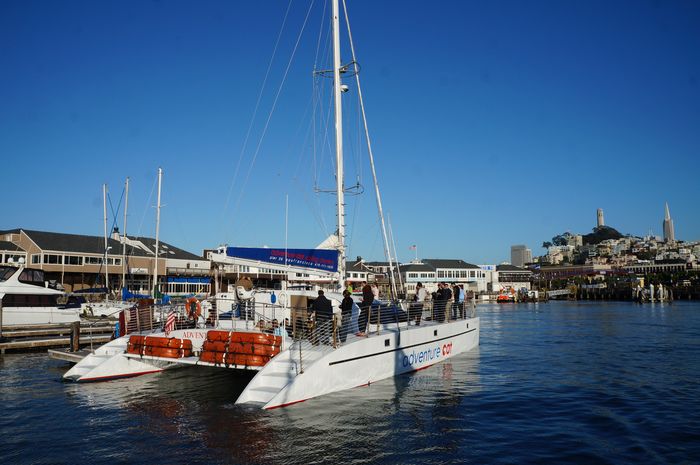 My kids immediately jumped on the food – fruit, cheese & crackers, dip, vegetables and more. It was a delicious spread. The bar was serving sodas, water, wine and beer. I never got around to more then one drink, because of the views and fine company. 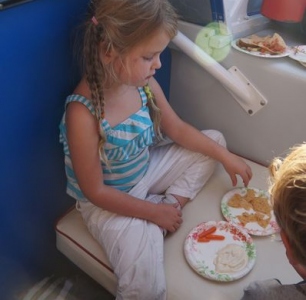 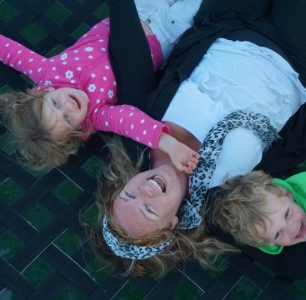 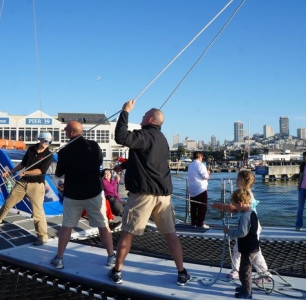 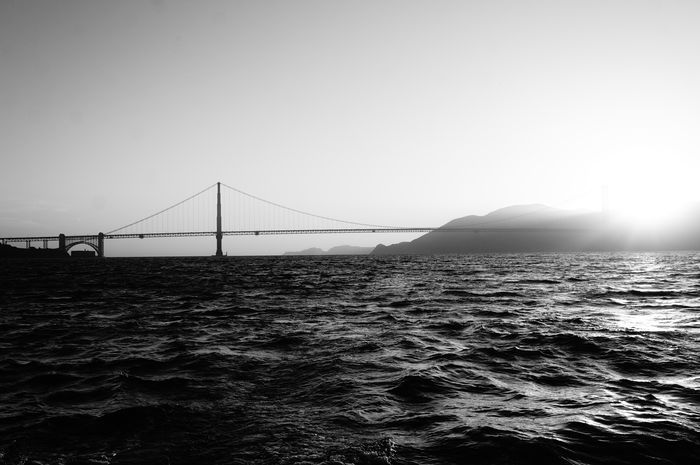 The people on board were diverse and friendly including some fellow Aussies & even a US lawyer or two. 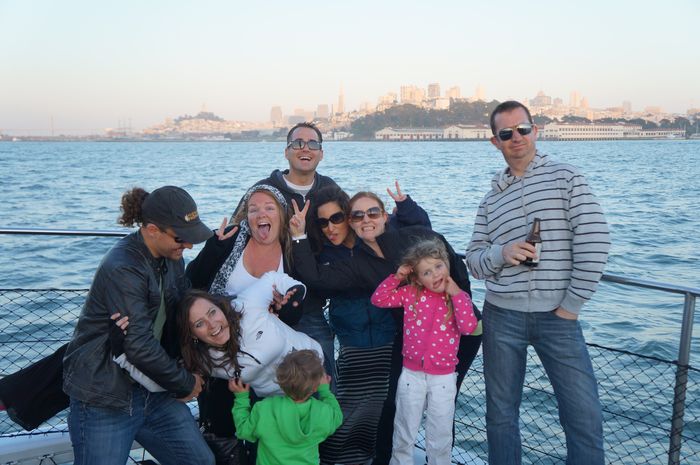 The views were stunning. We glided past Alcatraz and then headed under the Golden Gate Bridge, which was even more beautiful then riding over it. 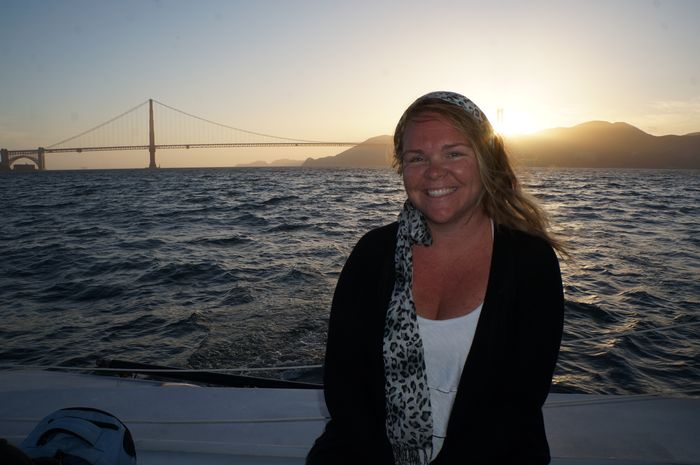 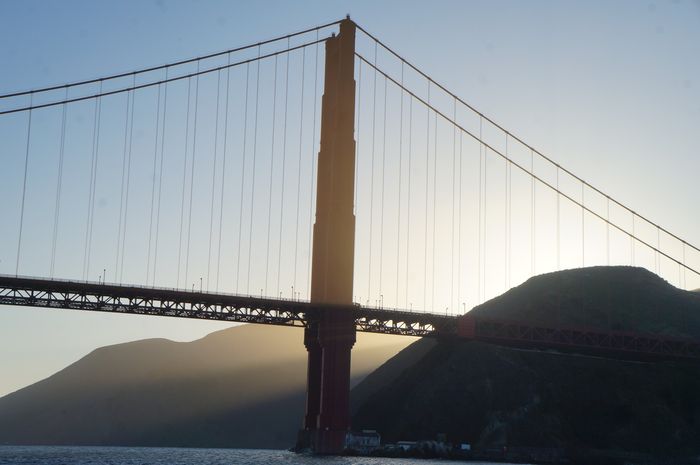 San Francisco’s sun sets quite late at this time of year and we had a magnificent burning orange sky on our cruise over the bay. If you do nothing else in San Francisco do this. It was relaxing and mesmerizing. Sunset was a perfect time to. The boat boards about 7pm and you disembark around 1.5 hours later. 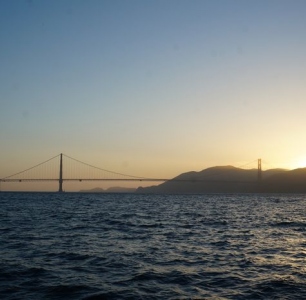 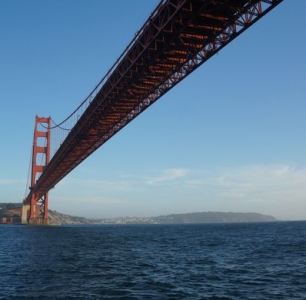 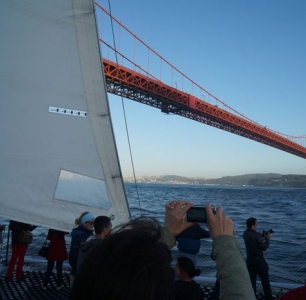 As we disembarked the docks were filled with enormous, lardy, sunbaking sea lions chatting to each other’s in honks and groans. The kids were uber excited to see them so close in the “wild”. 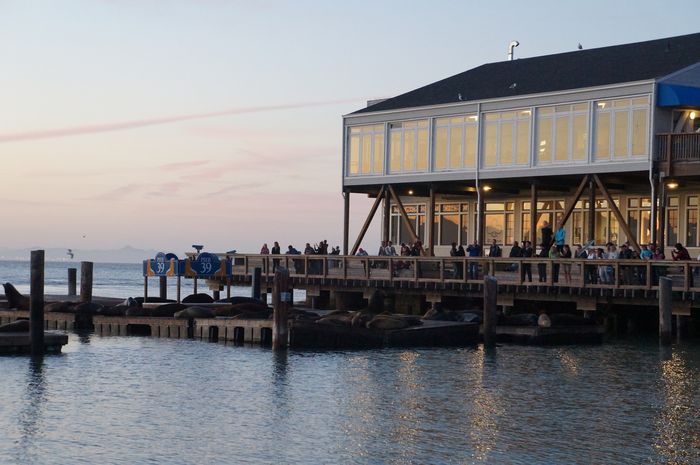 Before we left San Francisco we decided there was one other thing we needed to do and walked the short walk to Fisherman’s Wharf to eat at Bourdin’s. They have been making sourdough bread since the 1800’s and are still one of the most popular bakery/restaurants today.

Josh also decided he couldn’t leave San Fran without some chowder and had his first ever clam chowder in the sourdough bread bowl. I was not hungry and decided on a sour dough apple pie, delicious! 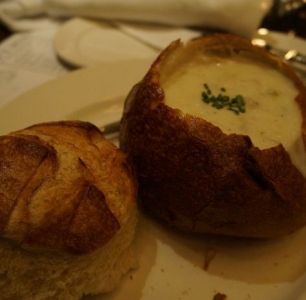 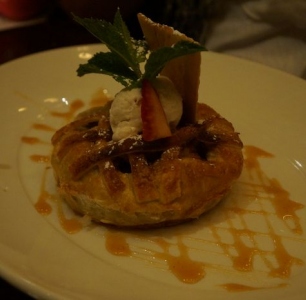 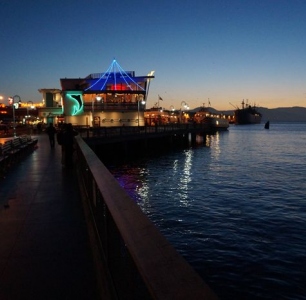 The food comes with a basket of sourdough too so I was quite ‘breaded out’. There’s so much history here you can taste it… literally. For example, that they are still using the same bread starter (live yeast that makes the bread rise) as when they started baking bread in the 1800’s. At the end of each day, a little raw dough is left over which is used to make the next day’s batch of bread. Fascinating.

It was close to 10pm when we hopped into our Jucy campervan and started our road trip. It was much later than anticipated, but we had done everything on our list in San Francisco, even though we found there was much more to do.

We drove over the Golden Gate Bridge leaving the twinkling lights of the affluent city of San Francisco behind. 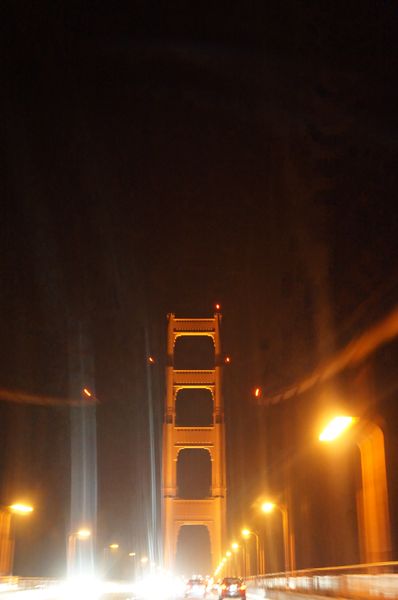 You don’t see a lot of children in San Francisco; mainly cause of the cost involved in living there, partly to do with the hills and general ‘cityiness’. It was a lavish city filled with soaring prices and delectable views. So completely removed from New Orleans with it’s non-hills, free festivals and relaxed lifestyle. You couldn’t get two more contrasting cities in the USA, and we visited them back-to-back.

If given the choice I would come back to San Francisco. It’s exclusivity and highbrow neighbourhoods had me intrigued and filled with a sort of jealous envy, wishing to be a part of it, but also to remain apart. Oh, San Francisco, how you intrigue me.