Rambuttri Village: One night in Bangkok is all it takes

Some of the group that had come for our Strangers Partying in Penang were heading to a place called Chiang Mai for the Yi Peng Festival at the Mae Jo University. My first thought as a sanguine was ‘I want to be where the people are, I don’t want to miss out’. My second thought, after watching a video of the event, was ‘there is no way I am missing that’!

Josh & I discussed and did not come to the conclusion until a mere week before the dates. See we had decided after much debate on moving on from Penang to the US and this put a hiccup in our plans. But the event happens once a year and when would we ever be this close to Thailand again at this time of year? Who would know? And so we booked airfares, accommodation and started to dream about what the event would be like.

There are two of these Lantern Festivals in Chiang Mai, usually in line with the full moon in November. This year there was one reportedly on the 30th November for tourists at $80 per head. However having friends on the inside we were informed of the local festival taking place on the 24th November.

Chiang Mai is in the north part of Thailand. You can get there by overnight train or fly for 1 hour from Bangkok. We left Penang for Bangkok on the 20th November. Our dear friends the Kings were staying overnight in Bangkok and we decided to join them trusting their booking of a hostel/guest house right on Khoa San Road. 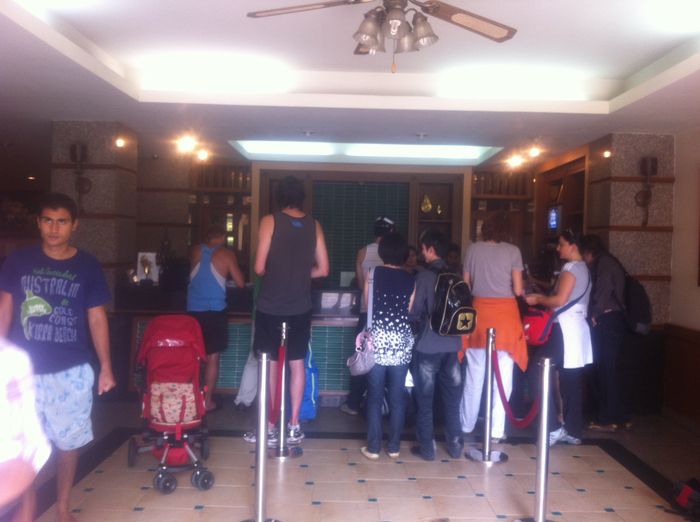 Josh had some business to do in Bangkok and left us at the hotel for his 9pm meeting. We found the Kings tucked up in their room and I left my kids their for a quick play while I went in search of food and water. Returning with some chicken sticks for the kids and some Pad Thai for myself.

It was lovely catching up with the Kings who I hadn’t seen for a month since Penang. But soon I was finished my dinner and everyone could say the kids needed a sleep.

While we were settling into our beds we had a knock on the door. It was a new travelling family we hadn’t met yet – Living Outside of the Box. They were also travelling to Chiang Mai for the festival. We had a quick chat with promises to meet again on the morrow.

The room at Rambuttri Village was ok. We booked the room on Agoda for cheaper then booking direct. When we drove down the street to the hotel I was amazed at the beauty and fun of the location. When I carted my 5 bags down the cobbled street while dreaded backpackers stared I was self-conscious. When I saw the lobby I was surprised. It was beautifully laid out, wooden floors and friendly service.

Our room was very basic. Two hard single beds with terrible pillows. We had got two rooms, but with Josh out on his business meeting I ended up putting two kids in one single bed and me in one single bed. Through out the night my son found his way to my bed and so I slept fitfully while he sprawled across my sheets.

Josh tells me he came home around 2am, the business meeting clearly went well. Seeing us all asleep he left us in the one room and headed to the other room all by himself.

The wifi did not work in the room so in the morning I came downstairs to put up some posts and check some emails. We spotted the Kings and went to breakfast with them next door to the hotel. Bacon was back on the menu, thank God!

The rest of the day was spent working, sleeping and eating. But 3pm came too soon and we bidded our friends adieu until Chiang Mai and grabbed a taxi to the airport.

We had decided not to take our entire luggage to Chiang Mai and found that BKK had a storage facility for bags. Thus we decided to book a flight with Bangkok Airways so we could leave and return to BKK for our flight to LA on the 28th. The storage place was located on the top level at the back of row N. They charged 200B per day for 2 bags. They were placed securely into their facility (Chubb) and we checked in for our flight with just our 4 carry-ons.

Bangkok Airways were magnificent and I highly recommend. They have a Boutique Lounge for all their guests with free wifi, drinks and snacks – popcorn, cookies, pastries, etc. There was even a play area for the kids so we had a very relaxing time waiting for our flight. The 1-hour flight to Chiang Mai also included a meal and drinks. 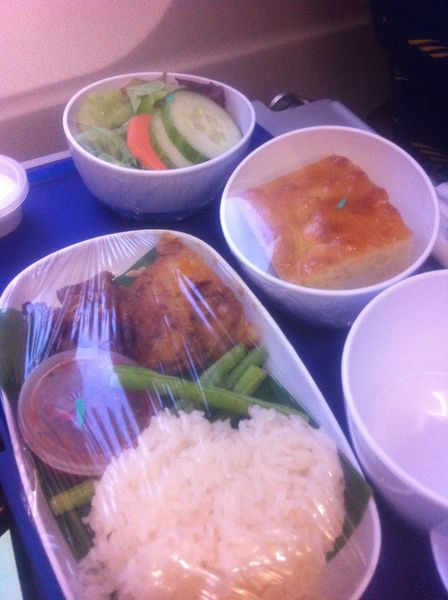 The flight back was just as great. Our flight was 50 minutes late, but sitting in the lounge was a pleasure. Both times we were given excellent seats. First time we were front row with masses amount of legroom and second flight Josh was given an exit row while we sat behind him.

One night was all it took for me to fall back in love with Bangkok. The area we stayed in we had never been while living there for a month and I was in awe. It was so happening. An absolutely amazing location, being in the heart of everything and feeling the buzz and atmosphere.

One night was all it took to set up our mood for what was to come. Chiang Mai with friends.

If you want to stay at Rambuttri Village, check the latest prices here.

"I respond to every comment by private email. So please leave me comments, I love chatting to you" - Josh Bender
Posted by Jo (The Blond) on Dec 3rd, 2012
I also flew with BKK airways before. Their planes are very clean and tidy, and they have good customer service. Did you fly first class? Didn't know that they had waiting areas...
Posted by Erin on Dec 3rd, 2012
Hi Jo, Nope just normal class. There was a small sign on the counter saying all guests could use Lounge services and then the checkin guy told us about it.
Next time watch out for it! :) Maybe it's a new thing?!