When tens of thousands of glowing lanterns fill the sky and drift away on the warm currents of the atmosphere your cares float away too. Your wishes, your worries, your prayers lifting to the heavens to be swept into the arms of God or to be enveloped into the darkness and be as far removed from you as the East is to the West. 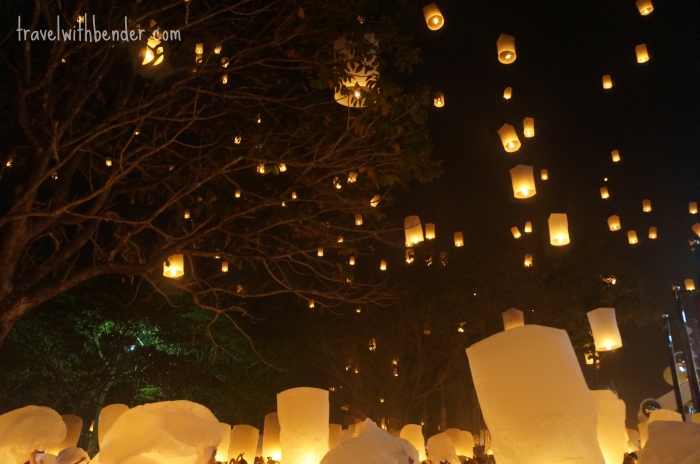 What Is The Lantern Festival?

I had never heard of the Lantern Festival. The closest I even knew of such a thing even happening is the scene on the Disney Rapunzel movie – Tangled, where lanterns are released every year for the princesses birthday. She was abducted at birth and every year watched the lanterns float through the sky and somehow sensed their connection to her. Finally when she discovers her rightful place and that the lanterns are in celebration of her she is home, happy and found.

There are two of these Lantern Festivals in Chiang Mai, usually in line with the full moon in November. This year there was one reportedly on the 30th November for tourists at $80 per head. However having friends on the inside we were informed of the local festival-taking place on the 24th November. The actual date is often confusing as the festival follows the ancient lunar calendar and changes every year.

The venue is some 18kms from the Old City and the suggestion is to get there before 6pm. We arranged a Songtow to take our 26-person party there and wait to bring us back. He was confused on where to go and it took a lot longer then we thought, although the traffic was minimal when we left about 4:30pm.

He dropped us somewhere far away and we had a slight trek to get to the entrance. It wasn't too busy yet and the dirt road walk was fairly easy. 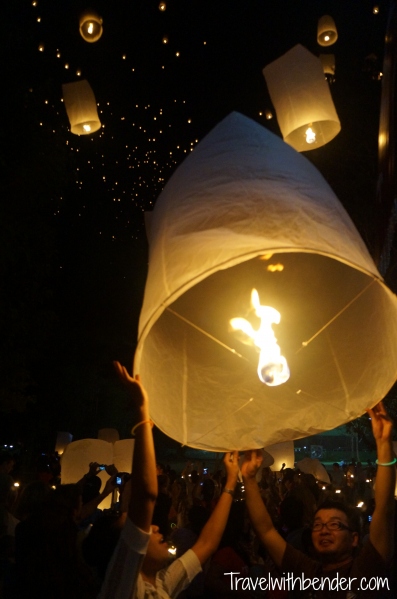 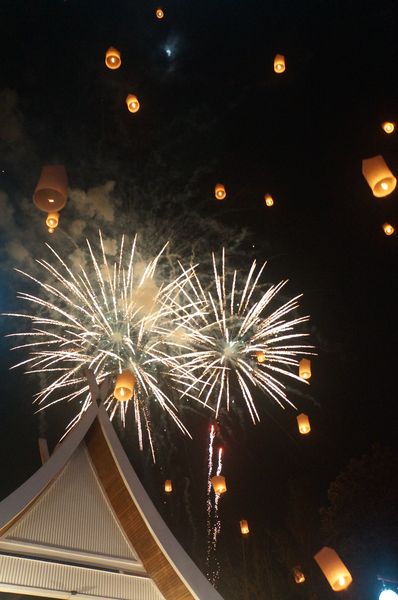 At the entrance the guards stopped three of our ladies for short shorts and bare shoulders. We moved to the tables selling Chiang Mai labelled clothing and I found myself in a pair of new shorts for 169B ($5AUD). The place was packed… so as a group of travelling families we decided to skip the crowded centre and head to the back. We planted ourselves in the last row where the kids could run around and play without fear of being trampled. 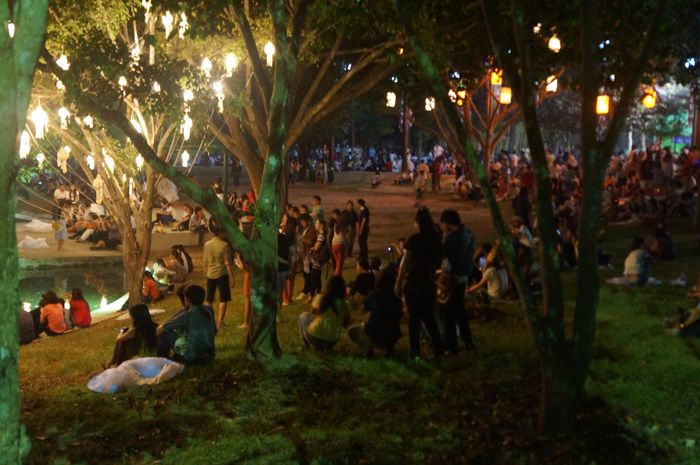 We waited a long time as the monks chanted and the religious side of the festival took place. Josh found plenty of different foods for us all to try including this amazing dough dipped in white chocolate. We socialised, the kids played in red dirt, we ate, and we watched the occasional floating lantern breeze by in the heavens and heard the sporadic sounds of bursting fireworks. 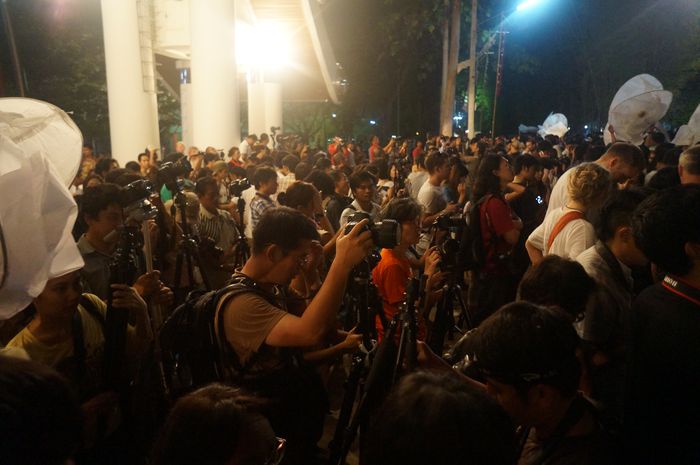 Somehow through the unity of the people a buzz started and lights were lit. All around us were poles with wicks on the end for the purpose of lighting lanterns. People came from nowhere lighting them and soon we were lighting our lanterns. You hold the giant lantern over the flame and into the round circle inside. The circle comes alight and you take the lantern off the flame and hold it down low as the hot air fills the lantern it takes shape and strains for release into the atmosphere.

The photos were taken, the wishes made, the release upon us. Caius tired and scared by the fire trembled in my arms. Mia excited and jumping with glee held on tightly to one side. Josh with camera in hand and the other hand on our lantern. And then me, the mum, also holding the lantern down to the earth until finally on a count of three we all raised our arms. Mia’s fingers slip off first, then mine and finally Josh as the lantern sailed into the firmament with its brothers and sisters.

After our first release we were hooked in watching everyone, filming, photographing, witnessing the delights on people’s faces. All of a sudden a loud boom was heard and the people who were waiting for that released their lanterns and thousands took to the sky. More than thousands! I hear estimates were between 20,000 – 30,000 lanterns.

It was during that moment that I was glad to have been focused on mine. To truly witness the wonder of the beautiful lights filling the sky and slipping away. No words will ever express the beauty and awe. 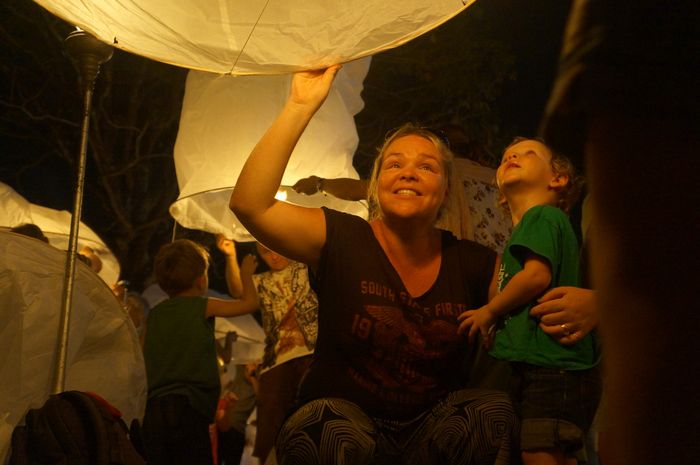 My 2 year old son watched warily and then whispered, “mummy it’s beautiful.” It certainly was.

He fell asleep soon after in my arms. The fireworks started and we all happily stared at the phenomenon before us. A few lanterns got stuck in trees, burning furiously and then fizzling out. Some lanterns were torn and never made it into the sky. Others found their way into street lamps. But nothing could squash the deep joy one faced when witnessing this marvel. 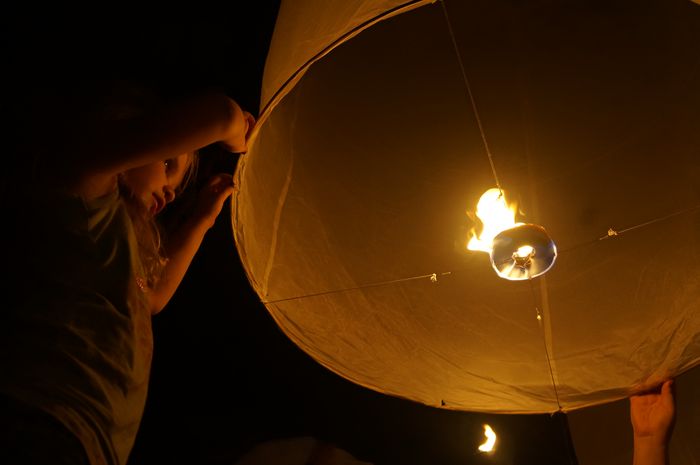 The Not So Magical Ride Home

At the end of the fireworks the crowds dispersed, us with them. We walked our way back to our driver only to be met with an absolute standstill of traffic. Our glorious night suddenly tainted by the 2-hour journey home crammed into an 11 person Songtow with 26 people and buckets of rain.

My husband Josh & new friend John became the men of the hour when our shy driver refused to be assertive allowing every car out of the parking lot before him. Josh put his whole 6'8" body in front of a very aggressive bus who revved and beeped and crept into him just so our Songtow could get a foot in. Later at a standstill at lights that were not operating, John braved the middle of the street and started directing traffic to get the flow happening again, before jumping back on in the pouring rain as we drove off.

Despite that mad 2 hours of absolute pain where the children cried and the adults wilted I would go again. By now the painful ride has diminished, but the wonder and joy of the lantern festival remain.

If you are to do any travel in this life, I would try and add this one to the bucket list. This magical evening left everyone who witnessed it feeling breathless and undoubtedly blessed. 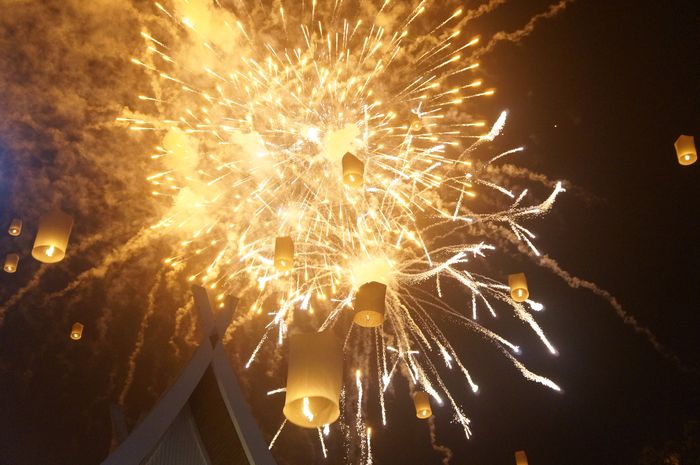 During our time in Chaing Mai we stayed at Sri Pat Guesthouse. For the latest prices click here. 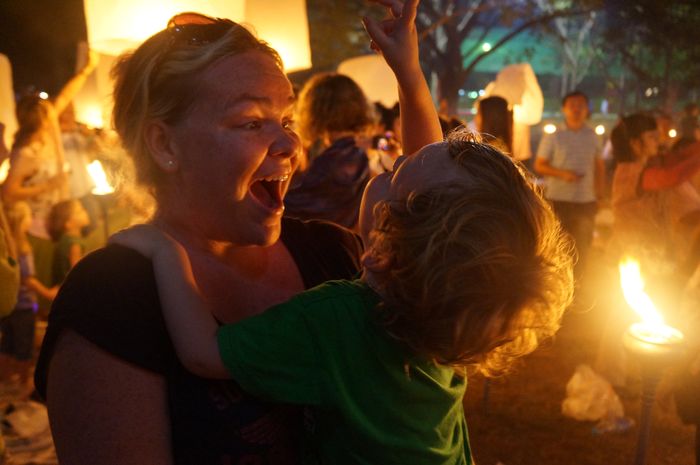 There are so many photos for you to see, please head to our Photo Journal.

Or perhaps you are more visual and would love to see our videos of the evening?

"I respond to every comment by private email. So please leave me comments, I love chatting to you" - Josh Bender
Posted by Karin Holmes on Dec 1st, 2012
Great story especially about the guys directing traffic
Posted by Karin on Dec 1st, 2012
Beautiful photos
Posted by lady on Dec 1st, 2012
Looks incredible, I wish I could remember going when i was a kid. Fabulous photos.
Posted by Jennifer Pearce on Dec 1st, 2012
Beautiful post, Erin! Such special memories. A life changing experience for all of us. So grateful. :)
Posted by Michele @ Malaysian Meanders on Dec 2nd, 2012
Truly a WOW experience. Those pictures are more incredible than what I had imagined. Perhaps I'll make it there next year (when I haven't promised to roast a 7 kg turkey for a large American Thanksgiving party). We tried to do a sky lantern release in Texas once to celebrate our Boy Scout troop's graduation. But the fire department wouldn't let us due to drought and the threat of wildfire. I guess it's not so much a problem in rainy Thailand.
Posted by Rhiannon on Dec 17th, 2012
This looks amazing! Would love to experience this one day, just looking at the photos it looks incredible!!
Posted by Lorena - A life type on Mar 14th, 2013
Erin, what an amazing experience.
We finally decided to start our nomad life in Yi Peng 2013! :)