I’ve never been the kind of guy who’s content to park my butt in front of the TV with a brew and tune out.

Don’t get me wrong. I’m all for relaxing with a movie or binge-watching a Netflix series, but it’s got to be educational as well as entertaining. Lately, every historical docudrama I’ve seen somehow includes the city of York in Northern England. Many commanding powers took a shot at ruling the unruly people of York, from the Romans, Saxons, Vikings, and Normans, to medieval English monarchs. With an entangled history so coalesced, I figured present-day York would be pretty interesting.

For every historic building, there’s a story of conquest, war, or rivalry and even a ghost story or three. York’s backstory had no shortage of drama, and the modern city celebrates its past, warts and all, creating a charming fusion of classical and quirky that’s ripe for exploring.

With this 3-day itinerary, I discovered interactive museums, cruised along the River Ouse, marvelled at beautiful architecture, and tasted mouth-watering international cuisines.

There’s no time for lollygagging. Let’s get York-ing! 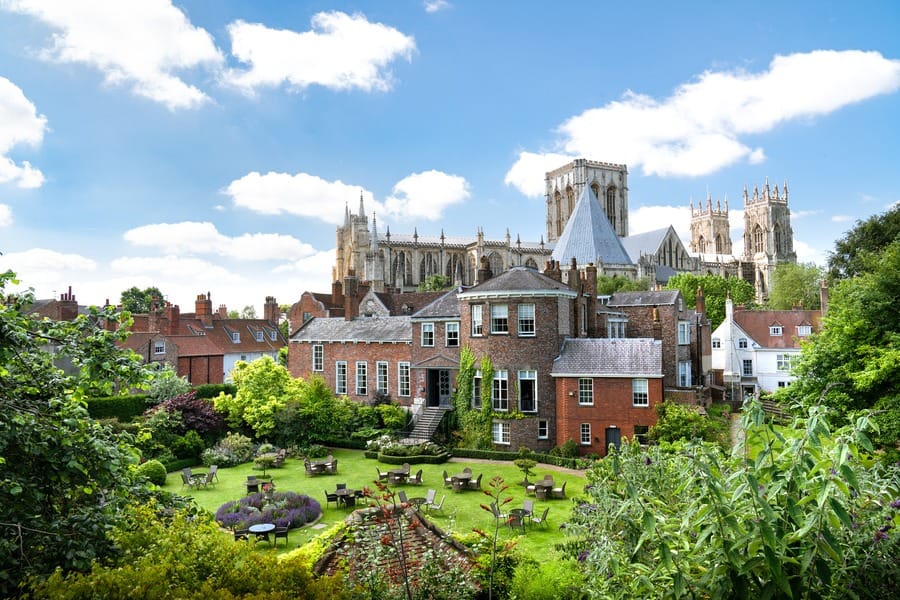 York Minster from the city walls

York tip: I recommend picking up a 3-day York Pass to save big on the attractions included in this itinerary.

Timing tip: While the headline assumes you’re enjoying a long weekend in York, this plan will work any time of the week (and mid-week is a little quieter!).

The York Pass covers entry to the most popular attractions in the centre of York and also some parks, castles, and museums beyond York. The pass can be purchased online and either shipped to a residential address within the UK, downloaded as a digital pass, or collected from the Visit York Information Centre. I collected my pass from Visit York and received a neat little pack with a York Pass card, vouchers for a hop-on hop-off bus and river cruise, and an information booklet.

York Pass Tip: If you choose to download a digital pass, you’ll still have to collect your bus and cruise vouchers from Visit York. 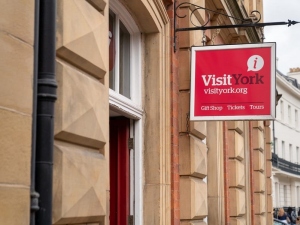 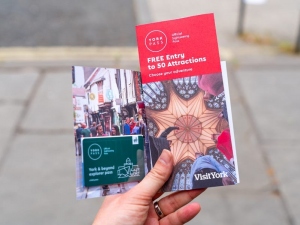 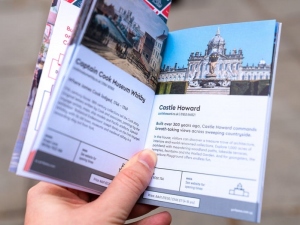 Without the 3-Day York Pass (£70), entry to attractions in this itinerary would cost £138.45 per person, meaning you save £68.45 by using the pass (almost 50%). The pass provides entry to more attractions than I could fit into 3 days, but the more you see, the more you save. So, let’s get going!

My first stop was York City Sightseeing (a 3-minute walk north from Visit York) to see this city from an open-top double-decker bus. I handed my York Pass voucher to the driver in exchange for a 24-hour hop-on hop-off bus ticket and climbed on board. My particular bus didn’t include the usual audio recording and headphones, but instead a live human guide, Nancy. Win!

Nancy pointed out many of York’s most quirky attractions, like 23 medieval stone cat statues forming York’s Cat Trail, and a pub that’s home to an ancient Roman bath. According to Nancy, York is the birthplace of Dame Judy Dench (we passed her old school), the city where Roman emperor Constantine was crowned, and has housed a thriving chocolate industry since the 1700’s. That’s right, we can thank York for Kit Kats and Smarties. 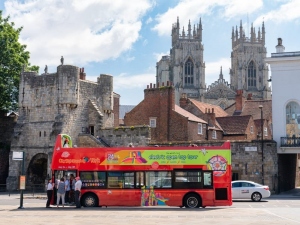 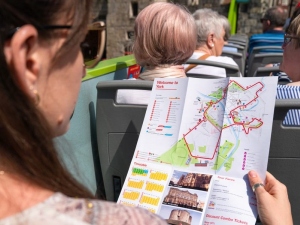 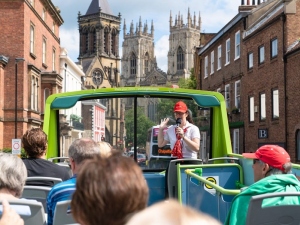 11:30am – Walk along York’s City Walls to the Richard III Experience

Just across the road from stop #1 for York City Sightseeing is a stone staircase leading to the top of the city walls at Bootham Bar. Walk northeast along these for 10 minutes for a stunning view of York Minster and to reach Monk Bar, home to the next York Pass attraction, the Richard III Experience.

Only in York: The 4 “bars” on York’s city walls are gatehouses that restricted traffic in medieval times. Not the kind of bars you’re thinking of. 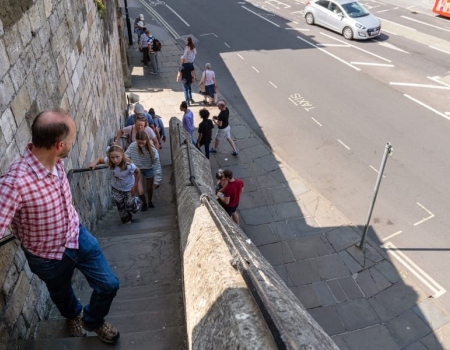 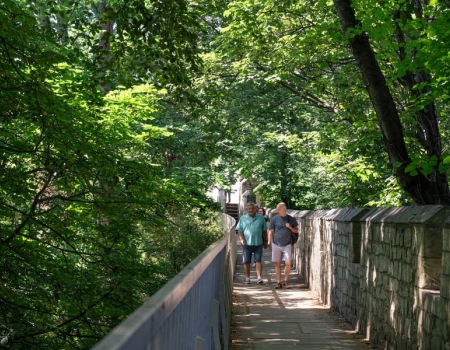 The 3-level museum starts on the top level of Monk Bar, where a short movie and series of placards tell the story of the Wars of the Roses, in which 2 royal houses fought for the crown over a series of bloody battles. The story continues a level below with the incredibly complex royal family tree, posters detailing the life and reign of King Richard III, and scale models of battle formations. There’s also a small display on the discovery of Richard III’s remains, which were found under a carpark in 2012. 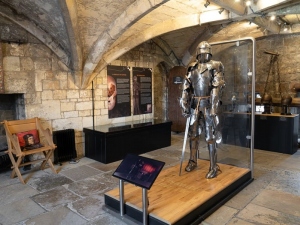 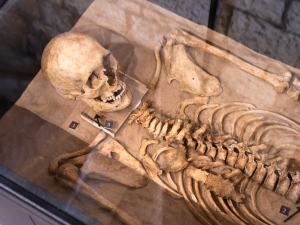 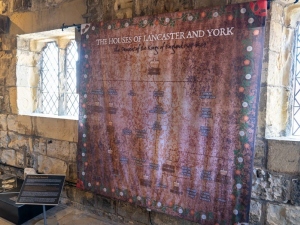 York tip: I recommend watching the TV series The White Queen before visiting the Richard III Experience. The show isn’t 100% accurate historically speaking, but provides enough context to better understand the information in this museum.

The next attraction, Fairfax House is a 10-minute walk south from the Richard III Experience, so stop on the way for lunch at one of York’s many international restaurants or traditional British pubs. I recommend Goji Vegetarian Café and Deli or Drakes Fish and Chips.

Show your York Pass to enter the 18th century townhouse and former winter home of Viscount Fairfax. The architecture style, classical furniture, and exquisite interior decorations provide a peek into the lavish lifestyles enjoyed by the elites of Georgian England.

2:30pm – Get groovy at the York Castle Museum

Walk 3 minutes southeast from Fairfax House to the York Castle Museum and present your York Pass at the ticket desk. This museum is a perfect example of how York makes history fun. It presents the everyday lives of locals from Victorian England to the 21st century in exhibits that appear frozen in time.

The first exhibits show Victorian period rooms of upper-class and lower-class families. The differences between lifestyles is really quite pronounced. The main event is a recreated Victorian street, “Kirkgate” complete with period-dressed actors and an operational candy store. As we get closer to present day, one exhibit focuses on the impact of WWI on everyday lifestyles and another on 1960s British rock music, tv shows, and movies. 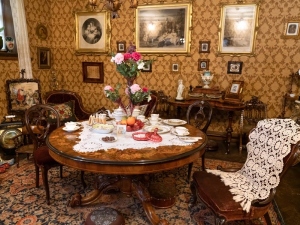 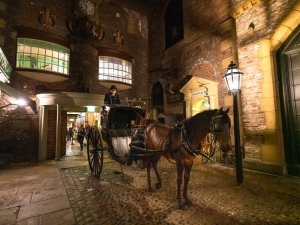 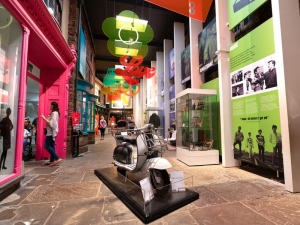 4pm – Admire York from the top of Clifford’s Tower

Clifford’s Tower is a 1-minute walk north from York Castle Museum and included in your York Pass. The imposing tower was originally part of the 13th century York Castle constructed by William the Conqueror to fortify his rule over England. Today, the tower serves as a lookout point providing 360° views over the city and River Ouse. 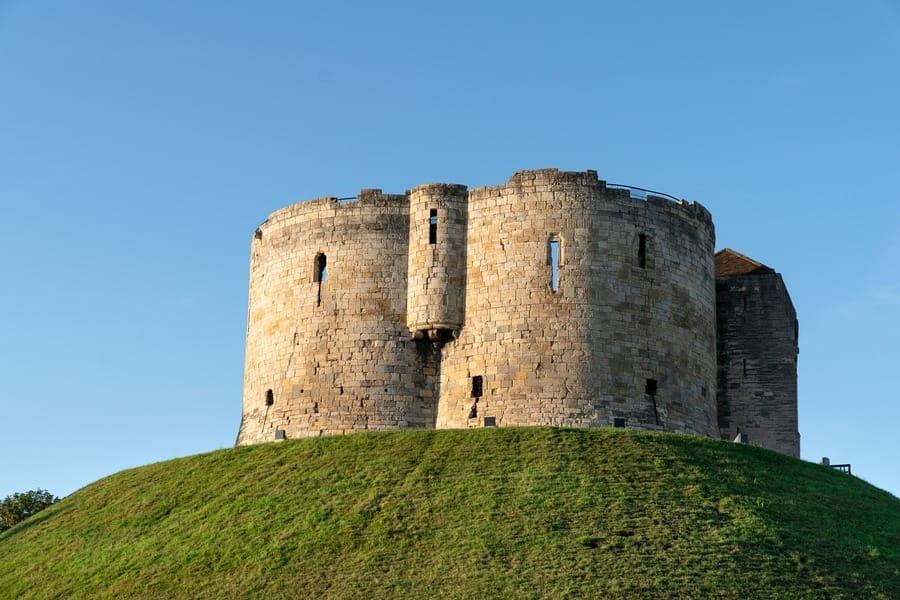 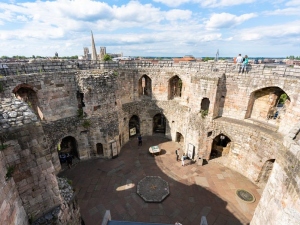 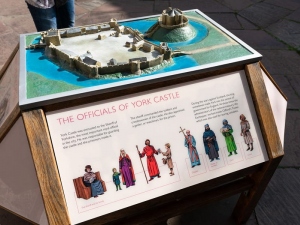 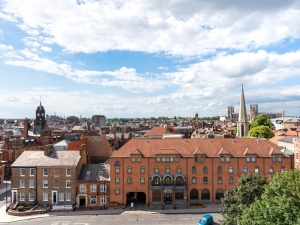 Walk 5 minutes west from Clifford’s Tower to King’s Staith Landing and hand in your York Pass cruise voucher for a 45-minute river cruise. Boats run regularly throughout the day depending on weather and season. The 4:30pm cruise is guaranteed between May and August.

Our captain, Aaron, filled us in on the history of York’s river system and pointed out notable landmarks, like the York Minster and an elite school that’s almost 1400 years old. The warm sun shone brightly on the day of our cruise, so remember to bring sunscreen. 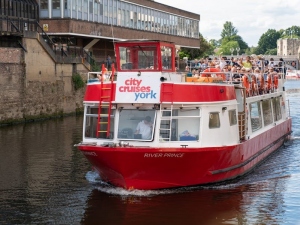 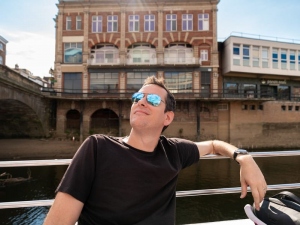 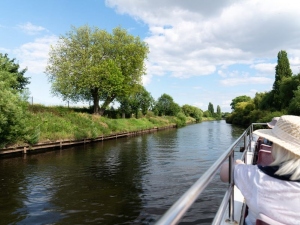 Next to Kings Staith Landing is the Kings Arms, a traditional pub with a selection of craft beers and ciders and riverfront alfresco seating. Grab a pint of your favourite brew to enjoy by the river. 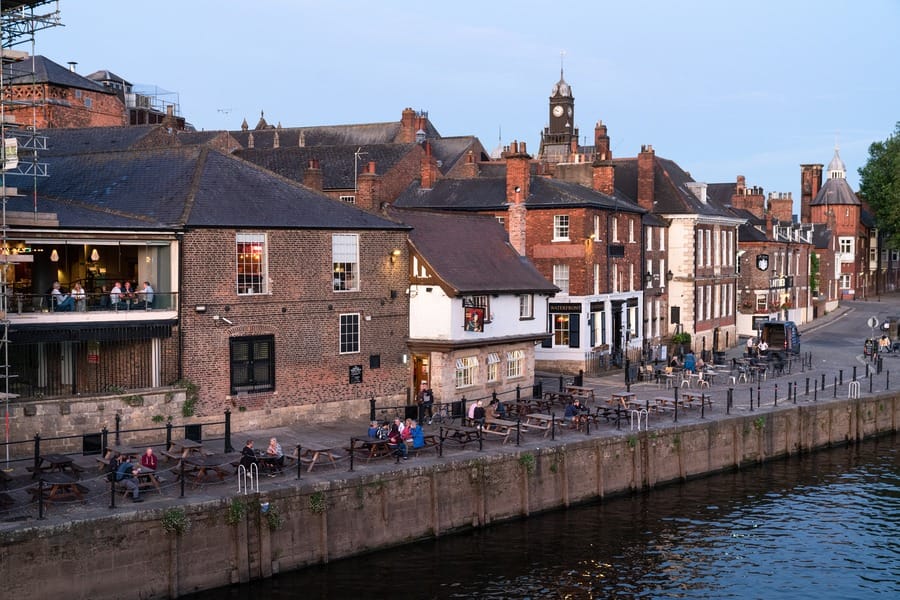 Walk 8 minutes north from Kings Arms for a taste of York’s international food scene at Los Moros, a cosy restaurant serving Northern African cuisine. This restaurant gets pretty busy so I suggest calling to reserve a table before you go.

My favourite thing about Los Moros is their use of fresh, local ingredients and home-grown veggies and herbs. They offer several vegetarian and vegan-friendly dishes too, so I went a little overboard ordering Morocco-inspired dishes like falafels, vegan shakshouka, butternut and chickpea couscous, and Moroccan salad.

The entirely authentic flavours transported my tastebuds the souks of Marrakesh – a surreal yet enjoyable out-of-body experience. 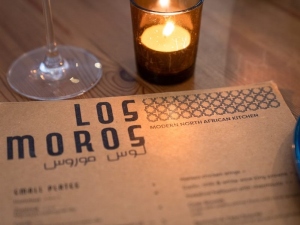 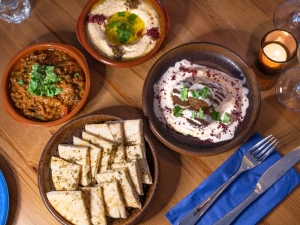 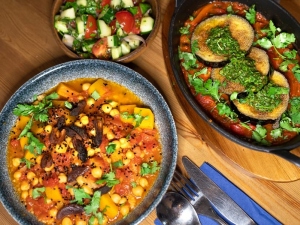 10am – Amble along The Shambles

Start your morning with a casual stroll along York’s narrowest and most picturesque pedestrian street, the Shambles. Some of the houses’ second stories extend so far over the street below they almost touch. Apparently, this was a sneaky tactic to build larger houses without paying tax on a larger land area. Today, the wistful buildings are stores selling chocolate, jewellery, souvenirs, and Harry Potter merchandise. Yes, there’s actually 3 Harry Potter shops on this street, which served as the inspiration for Diagon Alley. 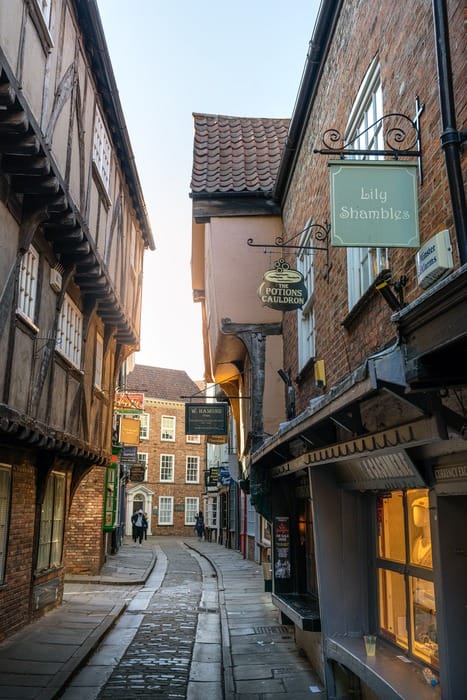 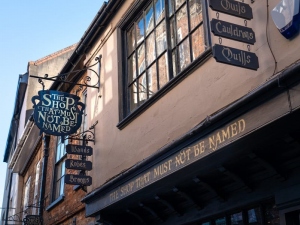 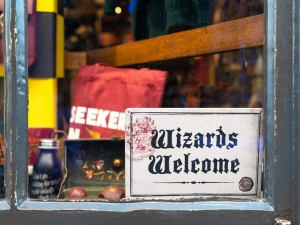 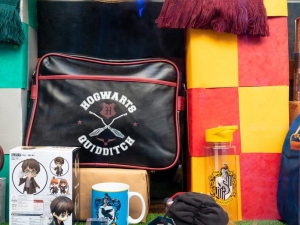