Where Do You Pee On A Speedboat?

Home » Destinations » Ambergris Caye, Belize » Where do you pee on a speedboat? Our journey to Ambergris Caye
Share with friends Tweet Pin

After a very late night at Xcaret and packing we had to get up early to finish our packing. The Property Manager arrived at 8:15am and kindly offered us a ride to the bus station. We arrived at 9am for our 9:20am bus ride to Chetumal.

We purchased the tickets at the station. It was $50 for Josh, Mia and I (I think Mia was half price), Caius was free. And then we sat down to wait and wait and wait. Finally about 9:50am the bus arrived and we were loaded on. Baggage was stored in the bottom with set seating in the top. The bus was a super comfy coach. Plush seats that recline, toilet in the back - pretty comfy.

It’s the first time we had ever taken a long journey on a bus and it was pretty easy. The kids had iPad & George (our android tablet) while I blogged on my laptop. The first part of the journey Caius and Mia shared a seat then when a few people got off at the first stop there were spare chairs and they had their own.

The 4.5 hours went surprisingly fast. As it was over lunch I had brought a loaf of bread, paper plates, plastic knife and our trusty nutella and peanut butter jars, which made everyone happy. My only tip was try to pick front or middle tickets, the toilet can get a little smelly.

Of course we arrived late in Chetumal and after a $5 taxi ride to the ferry port we stood in line waiting to buy our tickets to the last ferry of the day at 3pm. 3pm came and went but we were promised a ride on it so not to worry. It was a long process I am not sure why, but finally we were served. Ferry tickets for 3 were $155, Caius was free. Then we headed next door to the Immigration department to depart Mexico, which was a $50 exit fee (Josh & I), with kids free.

Finally with stamps out of Mexico we headed down the pier to a large number of people waiting.

The luggage went on board and then the pile of people were let on. There was not much room. Luggage took up a lot of room at the front of the boat and walking to the seats there was hard. I ended up with crappy seats at the front with 2 kids while Josh took a back seat. There was nowhere to put my legs and soon I realized that was the least of my worries. 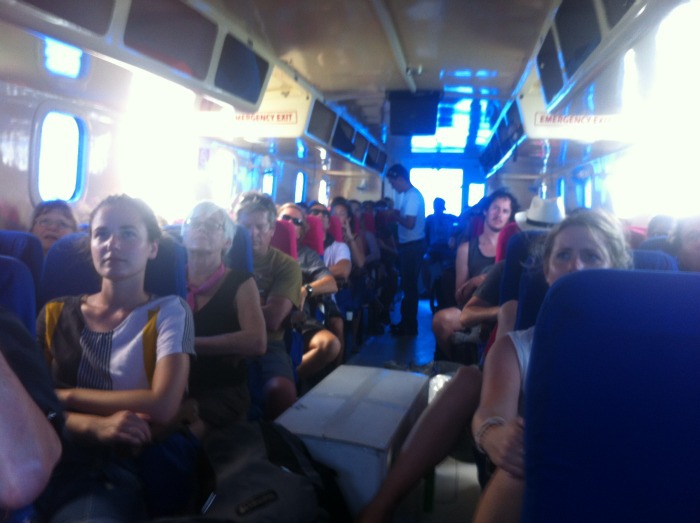 It felt like we were hitting concrete. The front of the boat slammed hard on every wave and I found a small measure of comfort in the two pillows the staff handed out. Mia quickly fell to sleep on one chair leaving Caius and I to share the single seat. 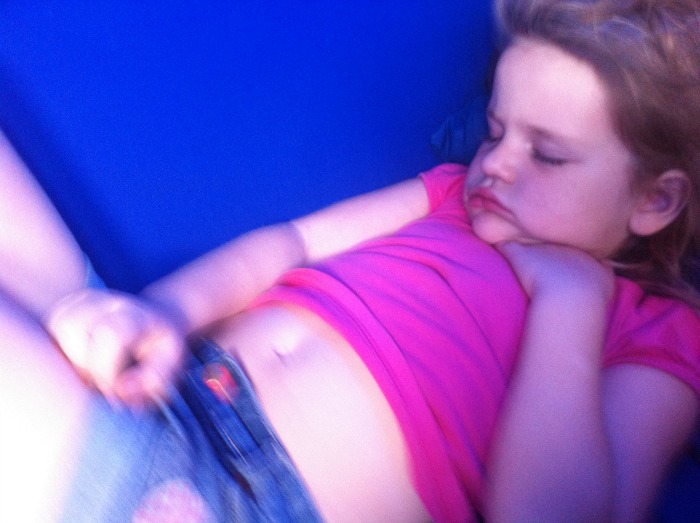 After an hour the ride calmed down and the staff sweetly hand out cookies and a cup of coke. It was a welcome relief. I got chatting to some New Zealand girls on their way to Caye Caulker and we shared travel stories.

The staff announced we were 15 minutes away from land on our 90-minute journey when my daughter wakes up in a panic. She has to go to the bathroom. With 5 minutes of pleading with her to wait and there is no bathroom and nothing I can do, she escalates from sobs to screaming and clutching.

I see no solution. I am not going to ask them to stop a speedboat of people to drop her over the side; I doubt she could even work under so much pressure. She can’t wee on the floor. So I ask her if she would like a nappy. Hysterics! She is not a baby; she will not use a nappy. Another 3 minutes pass and she is still crying. I told her a white lie.

“Mummy has used the nappy before, it’s okay to use the nappy. You don’t have to wear it, just wee into it.”

Sobbing she finally has no choice and proceeds to wee in the nappy. What a relief! She grinned, “That wasn’t so bad.” No kidding!

We pulled into San Pedro, Ambergris Caye, Belize as the sun is setting. It made a remarkable pink and orange swirling reflection across the ocean.

Immigration took a long time, and luckily we were on a beach waiting outside a shack so the kids were happy to play in the sand. Finally we got a stamp and were allowed into Belize.

After a short taxi ride we arrived at Xanadu. Starving, we headed to the closest restaurant, Rico’s on the Beach. It was a gorgeous restaurant on a pier and was decked out for Valentine’s Day. They had a set menu and we didn’t care we were so hungry we agreed to the ridiculous price. They scrambled to find us a table and chairs, because everything is, of course, reserved on such a romantic night.

Valentine’s dinner with 2 exhausted kids, not so romantic for us or anyone else. Well at least I got to celebrate Valentine’s Day sunset on a tropical island right?

What would you have done?

We asked our Facebook friends what they would do in this situation. Here are some of the great answers we received:

So what would you have done?

"I respond to every comment by private email. So please leave me comments, I love chatting to you" - Josh Bender
Posted by karin Holmes on Feb 24th, 2013
oh my poor Mia, she was very good to do this .
Posted by Ughubfghy on Sep 6th, 2019
Ask her just to hold it cross her legs hold her crotch