Long before radio, TV or the cinema was the world of puppets. But just like “video killed the radio stars” so, too, did the fine art of marionette initiate its slow demise as movies invaded homes across the globe. 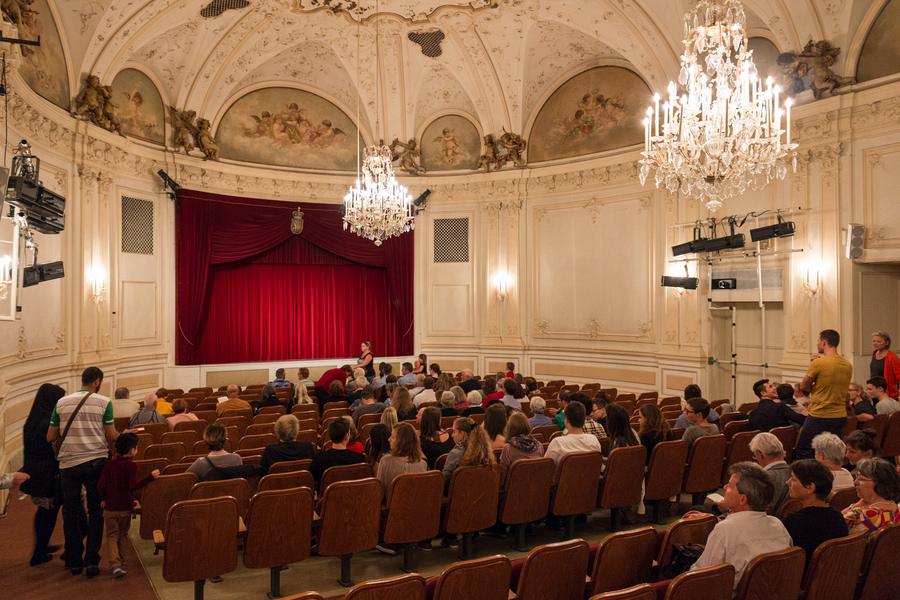 Established in 1913, Salzburg Marionette Theatre is one of the oldest marionette theatres in continuous operation anywhere in the world. It originally performed famous Mozart operas (which are still popular these days) and additional productions like Sound of Music have been added in more recent years.

Puppeteers for the theatre are trained in the theatre itself using a well-proven model that is now used in marionette theatres worldwide.

Throughout the year The Salzburg Marionette Theatre stages some 160 performances plus a further 60–100 on tours around the world.

We were so blessed to be able to step behind the scenes of the theatre with Director Barbara Heuberger. She indulged our most curious of fantasies from meeting the puppeteers to seeing the stage from above. 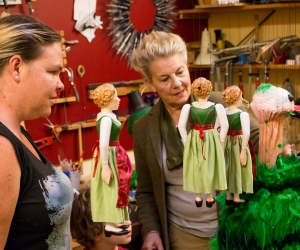 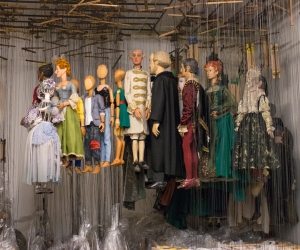 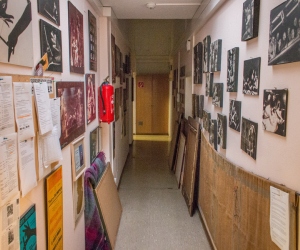 Our kids’ favourite part of our tour was seeing the storage room for the puppets. Currently, some 500 puppets are "employed" at the Salzburg Marionette Theatre and we recognised characters from Alice In Wonderland, Sound of Music and plenty of other popular productions. 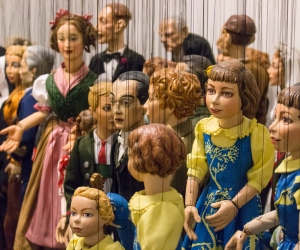 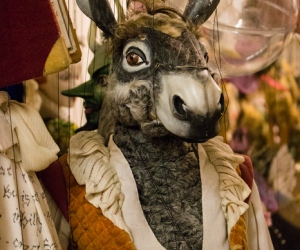 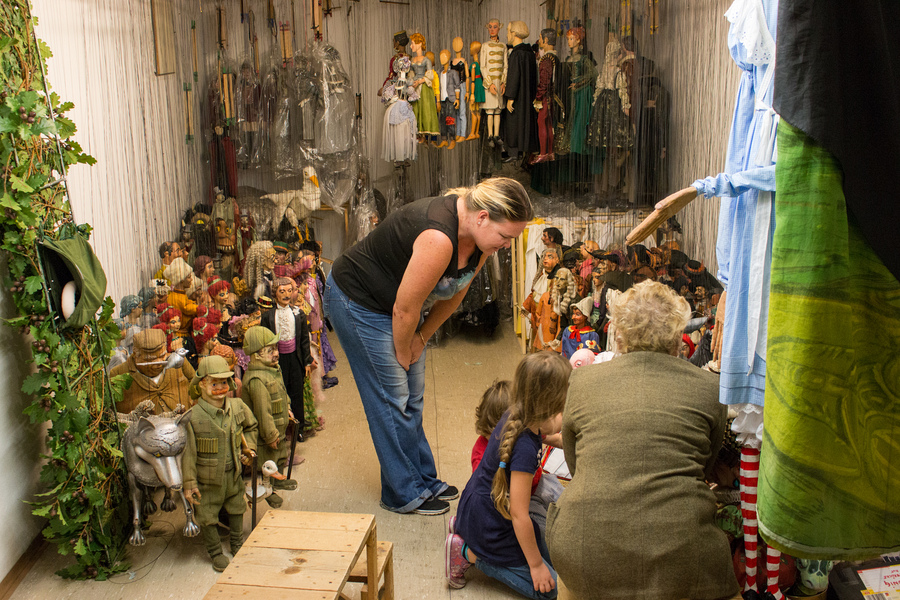 The way these little wooden people moved and their intricate facial experiences were a truly emotional moment. These handcrafted wooden puppets on strings fast became our own adopted Pinocchios that we were sending wishes to the stars so they would all become real… well, except maybe the dragon or wicked Queen of Hearts. 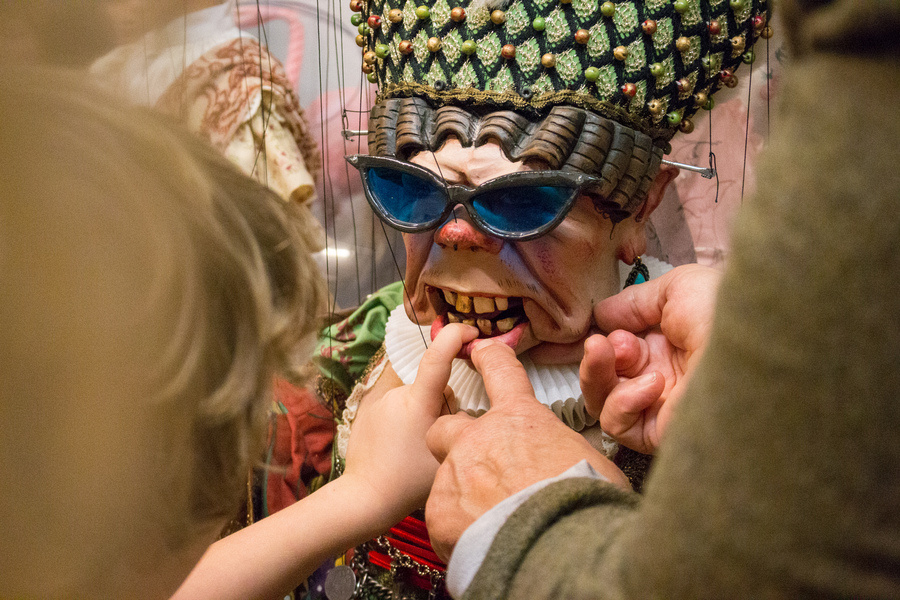 As imperative as the puppets, is the actual stage. And a behind-the-scenes look at the stage was like being a child on a visit to Disneyland. I felt in my element, astounded and contentedly wide-eyed in my discovery of how the puppeteers unfurled their magic on set. 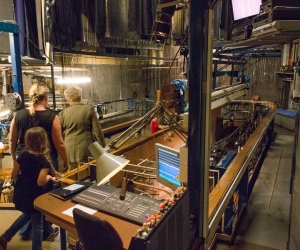 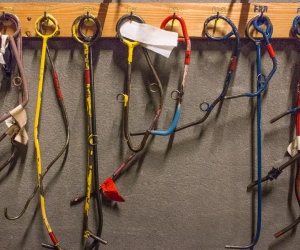 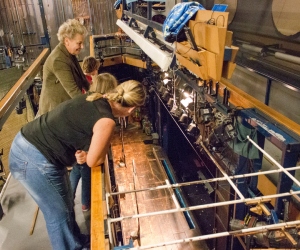 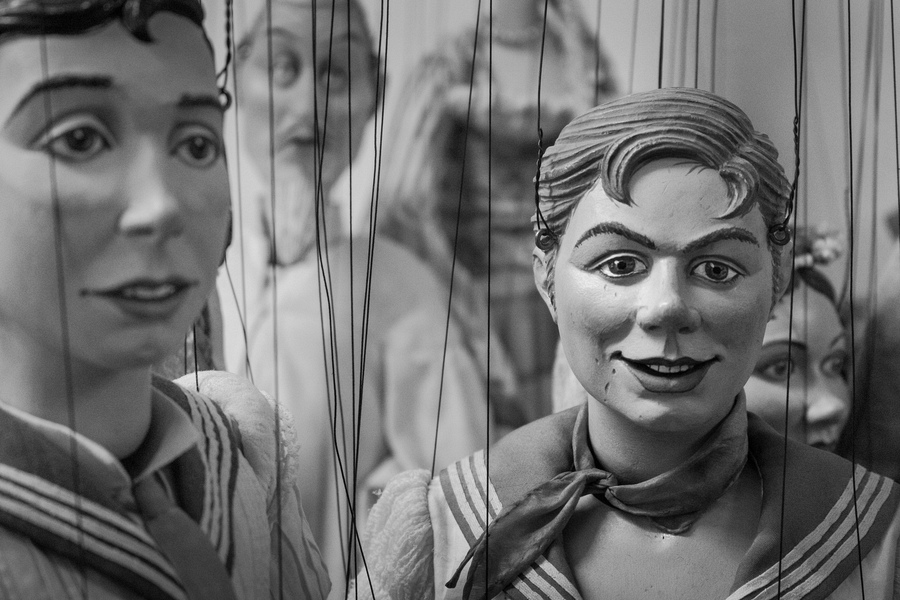 It wasn’t long before we were ushered out from backstage to the front of house as the show prepared to start.

The theatre has been restored to its original beauty, although slightly larger in size than the early days. 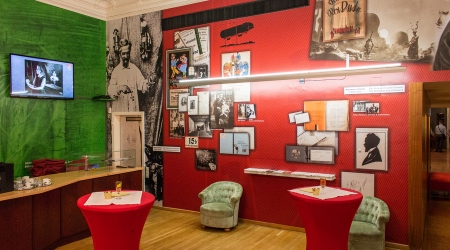 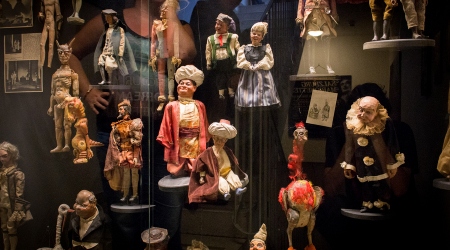 The original productions used to feature live actors and musicians, however these days the actors produce soundtracks at the theatre and a recording is played for the performance. On top of the sound, there are superb lighting effects, gorgeous sets, and in any one production, between 20 and 90 different marionettes.

We were scheduled to watch Sound of Music, however one of the puppeteers had an unfortunate accident (took the quote “break a leg” too literally) and the show was replaced with The Magic Flute.

The kids were slightly saddened as our original choice was in English, and The Magic Flute was in German.

Thankfully I had been aware of the change earlier that day and we had watched a YouTube video on the story of The Magic Flute so we knew exactly what was going on. The theatre also provided two screens either side of the stage with occasional subtitles, just enough to get the gist of the story, but not enough to catch the full intricacies of the humour and drama.

The show was magic and it wasn’t long before reality blurred with the imagination. I hardly realised there were puppets on the stage, rather they were tiny real-life individuals.

The kids did not find the performance as much to their liking as we did, or perhaps it was just the late hour after a long day that set off their grumpiness. Caius fell asleep, while Mia did make it through until the 9:30pm finale. Because of the late schedule I wouldn’t recommend an evening show for young children, however they have specially designed family programs with shorter running lengths and afternoon start times, which are perfect for kids. In our evening performance the majority of guests were well-dressed adults out for a special night in Salzburg.

It is my hope the dying art of the Marionette Theatre lives on, even if it’s only a few world class theatres like The Salzburg Marionette Theatre that carry on such a special tradition and entertaining family friendly form of art. 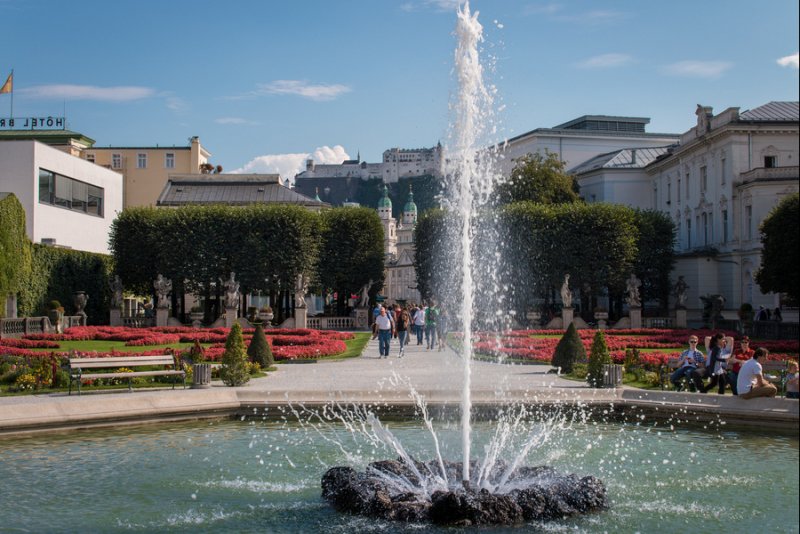 Salzburg was easily my favourite city in Austria, and from the moment we arrived I fell madly, deeply in love with it. Filled with effortless old world charm and subtle classical… 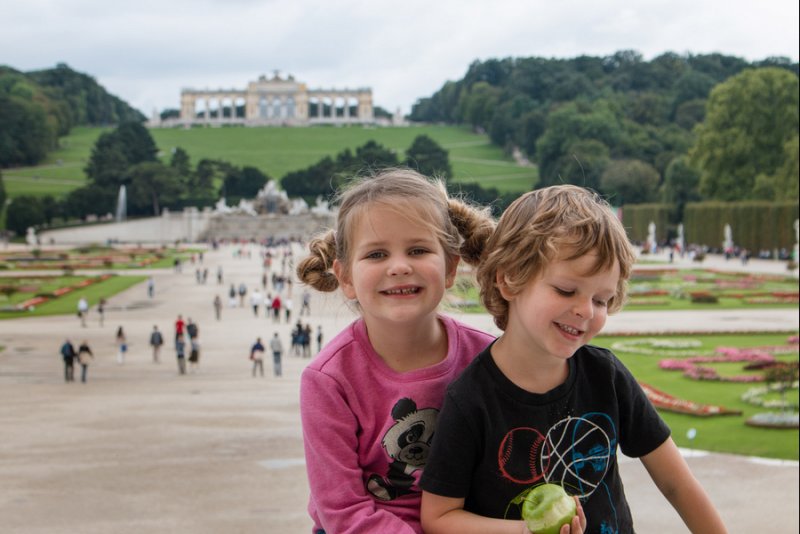 9 Things To Do With Kids In Vienna, Austria

Although the city of Vienna has a well-known history associated with classical music, operas and art, it is also home to schnapps, Swarovski Crystals, and psychoanalysis. All the… 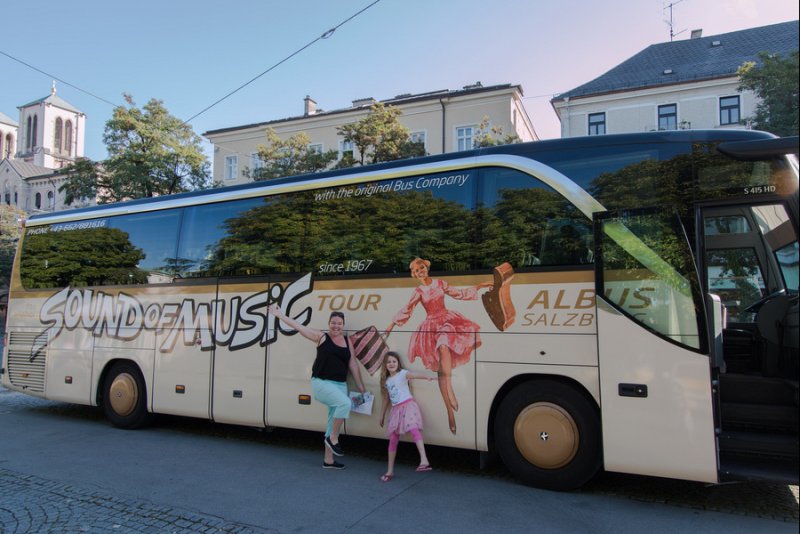 This is the most authentic way to see many locations around Salzburg used in the Academy Award-Winning film, The Sound of Music. We sang the songs, ate the strudel, and climbed… 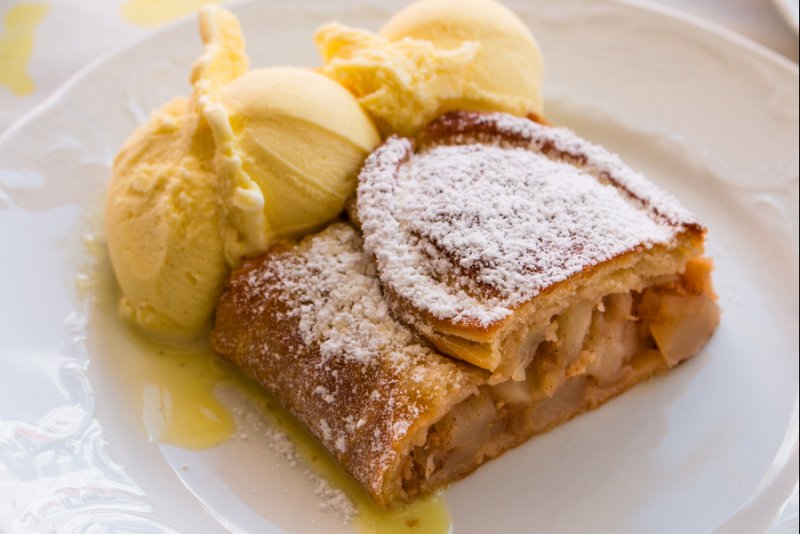 Other than the Sound of Music’s “My Favourite Things” song to guide me, I didn’t know much about Austria’s food before arriving. Famous for their sweet tooth, it should be no…

How fascinating I would love to see a show

What an awesome day trip, a piece of history but also fascinating at the same time! We have friends in Vienna and I am going to suggest this to them right away!

What a fabulous opportunity! Even though I'm actually quite scared of puppets and just looking at your photos sends shivers down my spine, I'd still be fascintaed to see behind the scenes. Such a shame though that you were at an evening performance from your kids point of view.

What a great write up. You took me back to my youth when we would go to marionette theatre for birthday parties. Amazing to see them in mass with your photos. You're right, it doesn't take long looking at them to forget there are strings attached.

Oh my gosh...that's so creepy! I have to say that it'd be cool to attend one of these shows but I'm pretty sure I'd have nightmares for days afterwards!! X-D