As far as we know there are at least 5 waterparks in the Sunny Beach (Bulgaria) area, be it hotels, resorts or regular standalone parks.

While we didn’t visit all of them we decided to review the two largest and most popular so you can decide which one is going to be the best choice for your vacation (aren’t we nice!).

Both opened for the summer season in the last weekend in May and both operate free return shuttles to the park from bus stops along the main road in Sunny Beach. You will not miss these as they have a sign at the bus stop and usually a young girl handing out brochures daily. 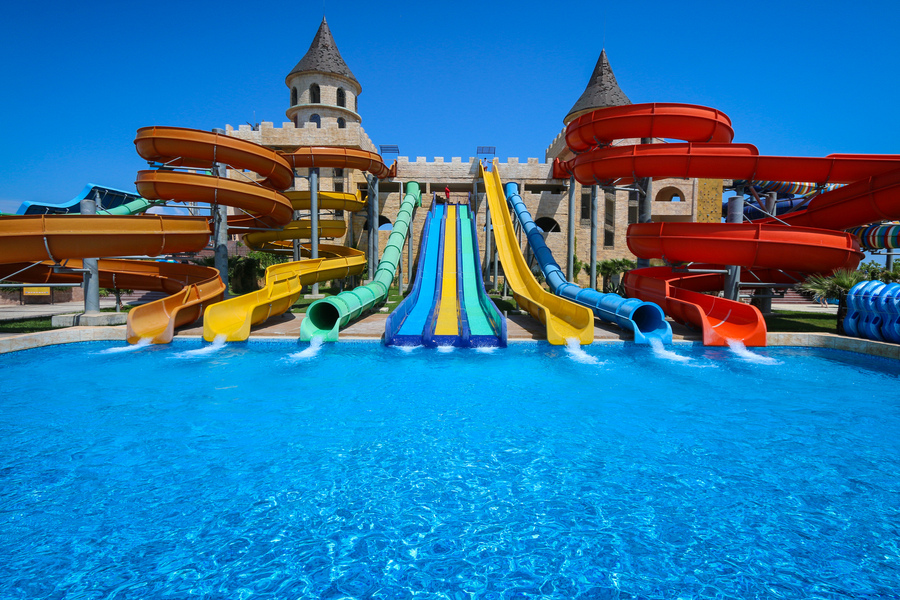 This park is situated about 10 minutes from the centre of Sunny Beach in the town of Nessebar, Bulgaria.

We visited on the first day of the summer season, before the big crowds inundate Sunny Beach, so Aqua Paradise was virtually empty. No lines resulted in instant gratification. It was like our own private waterpark!

We were so lucky to have Zoe and her daughter with us. A reader of our blog she had first contacted us during our Israel visit, however we missed each other. Coincidentally she was on vacation in Bulgaria and we decided to meet. 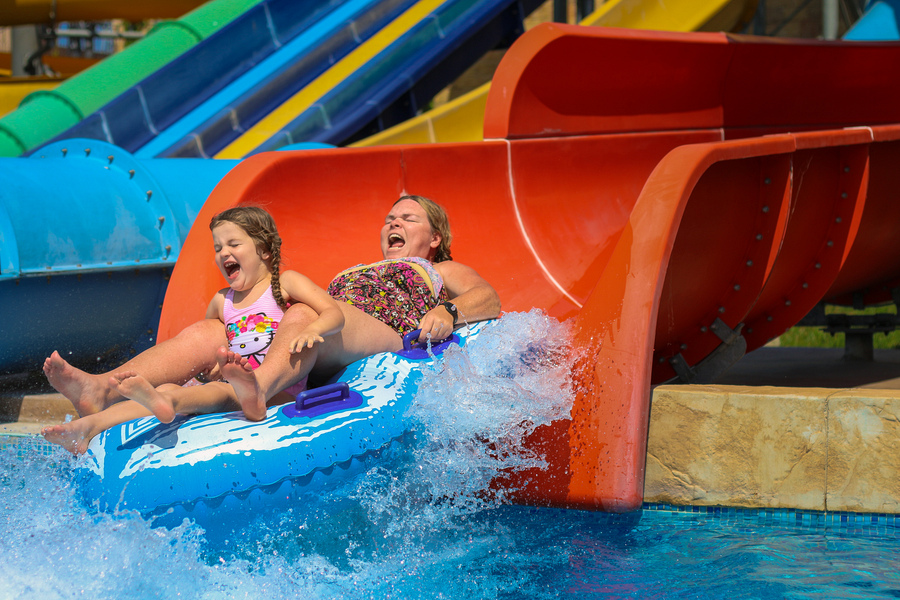 They operate a convenient cashless armband system so you don’t have to carry soggy notes to pay for lockers and food. Lockers were found in the women’s and men’s toilets. Children under 130cm were not allowed on ANY slides except the small children’s water play area, which was pretty disappointing. 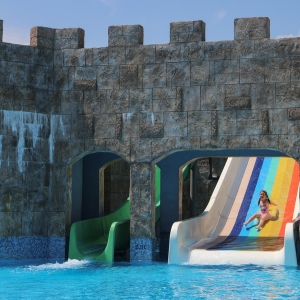 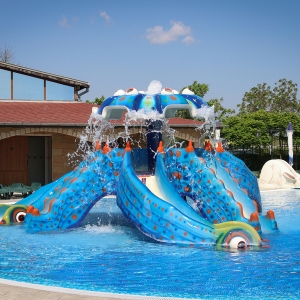 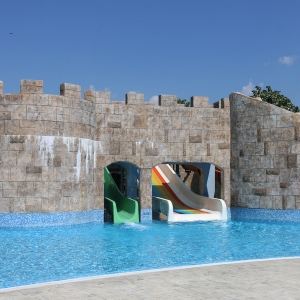 However we managed to convince the staff that our kids were strong swimmers so after some coaxing, they were allowed to slide down as long as we were with them. 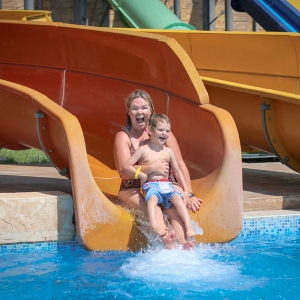 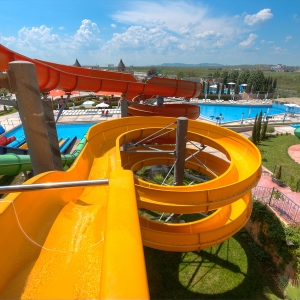 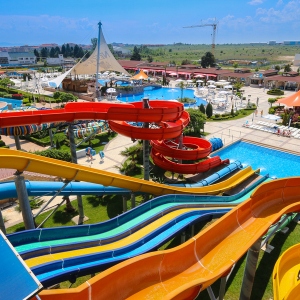 The food at the onsite restaurant was served in very small sizes (Josh had to eat 2.5 meals) and relatively expensive considering the restaurant prices around Sunny Beach. Most of the food stalls were still closed when we were there and what was available, was not particularly good except my freshly grilled chicken.

As the ticket and food prices would suggest, these parks are made for tourists not for locals.

The kids play area was lot of fun for the little ones, albeit a little slippery on the paving around the pool. The kids area would be best suited for ages 2 to 9. 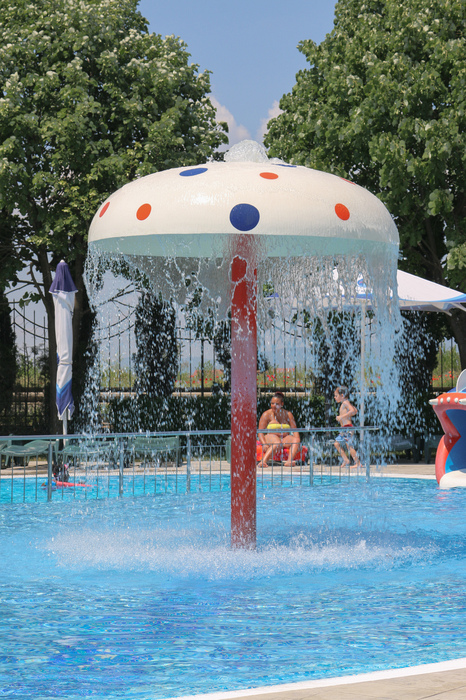 What they lacked in kids slides were made up in adult slides. There was a nice range of what I’d categorise as “adventure” slides. These would get the heart pumping and induce a scream or two. 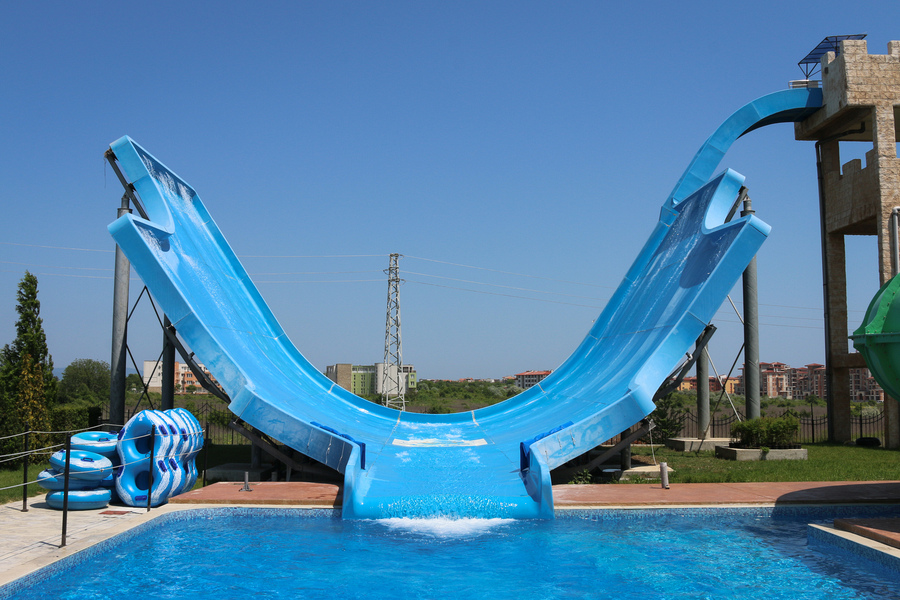 Like the shuttered food stalls, it seemed there were a number of slides not yet in operation since it was the beginning of the season. I would think if they plan on only having some slides available, they should not charge a full price entry ticket. So the bang for our buck was a bit lacking in that department.

Not the best waterpark, but certainly not the worst we’ve been to and still a fun day out in the sun.

What To Love: Cashless system in the park. 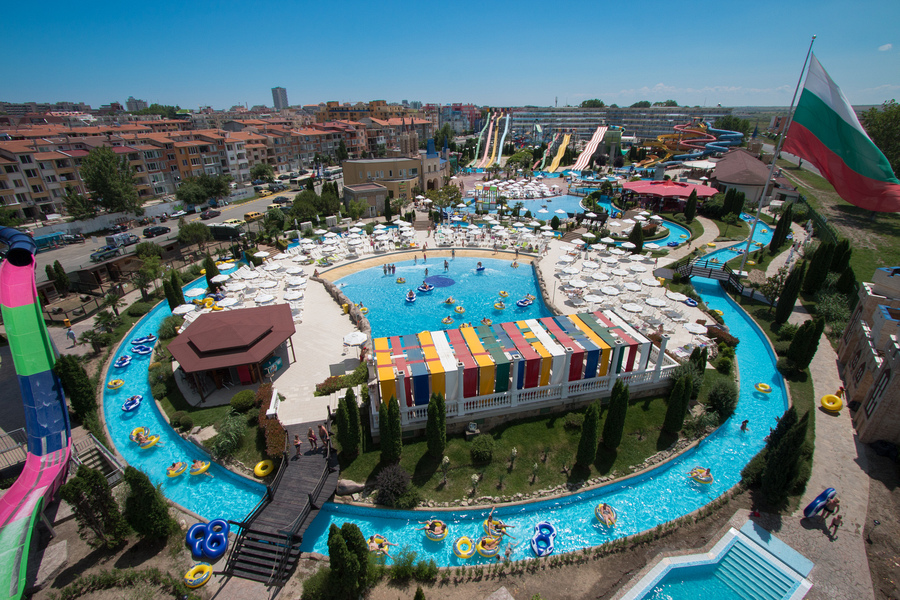 This park may not necessarily cover more area than Aqua Paradise, but there are definitely more slides and activities. We visited during the 2nd week of June and it was already in full swing. 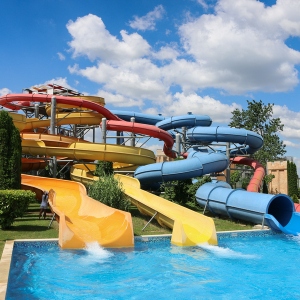 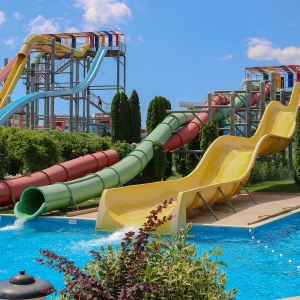 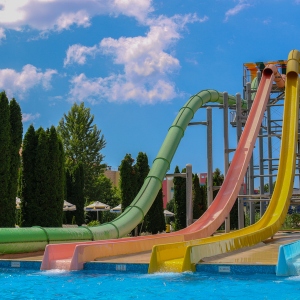 The kids were allowed on most of the slides as long as accompanied by an adult (the height policies were not as strictly enforced as Aqua Paradise). Although we appreciated the freedom, this was not always such a good thing, as some of the slide staff didn’t really know how to sit the kids in the inflatable tube and a few times we were pushed off before anyone was ready.

They have one particular slide which was really awesome - It featured two uphill segments as well as several downhills, open and enclosed tubes and even rainbow coloured bands which give the feeling of going back in time as they whoosh past. The kids had to sit “monkey style” on our backs so the double tube didn’t tip backwards. It’s also happened to be longest and highest waterslide in the region – 20m tall and 165m long. We rode it at least 4 times and the kids loved it. The long climb to the top never fazed them. Although I found the rocking tower the scariest part.

There is a small shallow toddler pool and play area which was ideal for 1 to 4 year olds, and a larger water playground with tipping buckets and numerous slides, best suited for 3 to 16 year old. The children really loved this area. However, I’d recommend keeping a close eye on them because the one nonchalant lifeguard wasn’t adequate to supervise the children - he seemed more interested his tan or doing push ups. 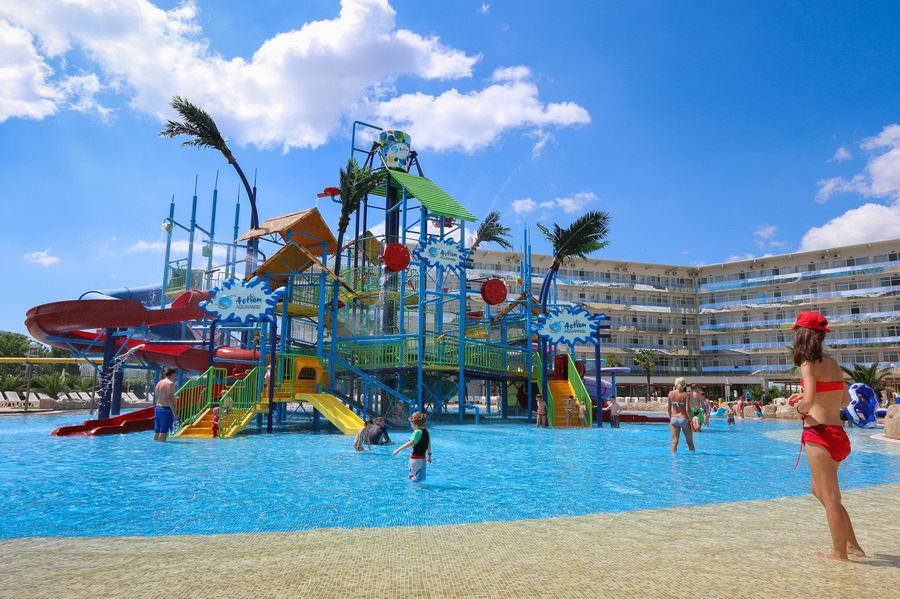 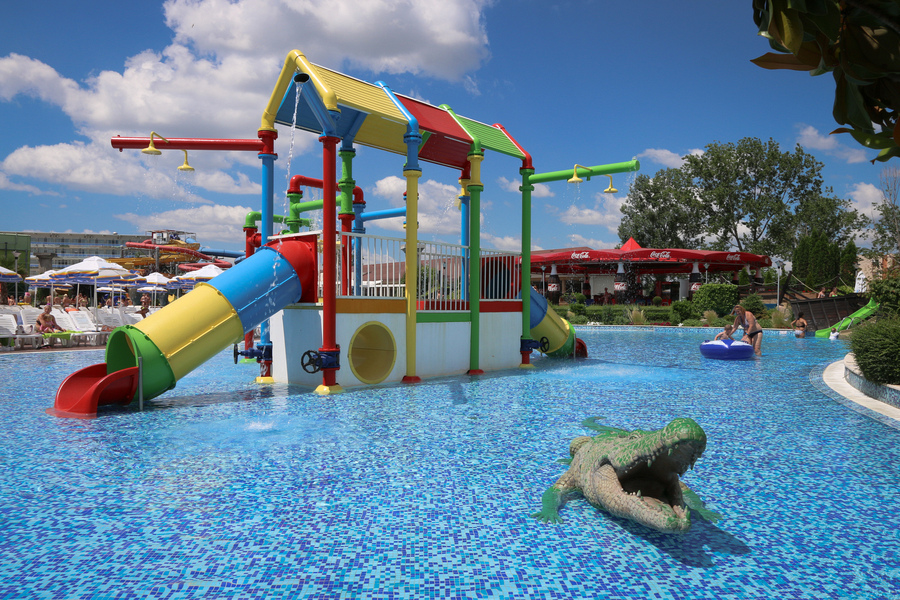 In the middle of the day a dance and music stage performance was held. My kids were bored after one lip-synced, beep-boppin tune and they moved back to the slides.

As we walked around I noticed the grounds were maintained much better than Aqua Paradise. In fact, there was an abundance here of 2 things that are very rare in Sunny Beach – manicured gardens and rubbish bins.  I was impressed about the attention to detail; even garden beds that were tucked out the way were perfectly trimmed and hedged. 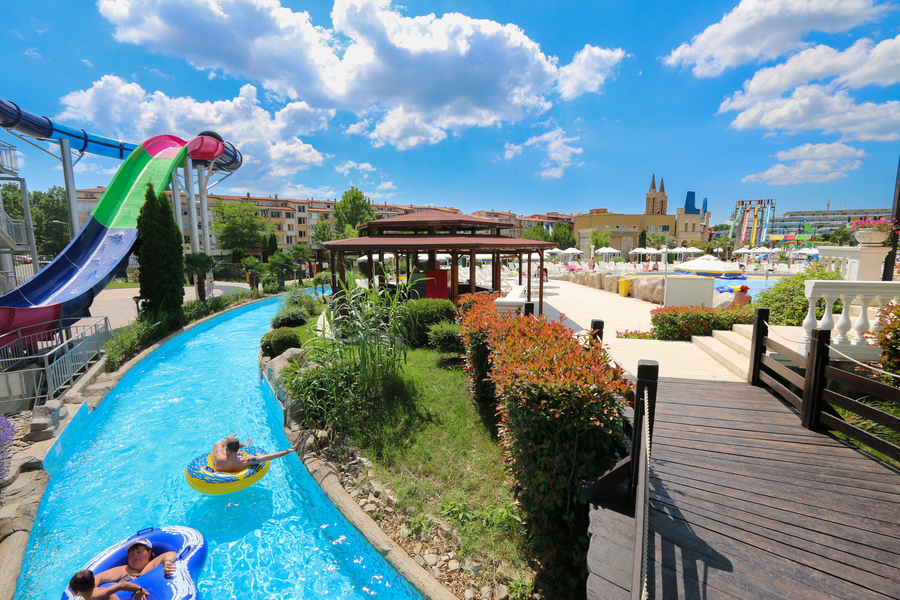 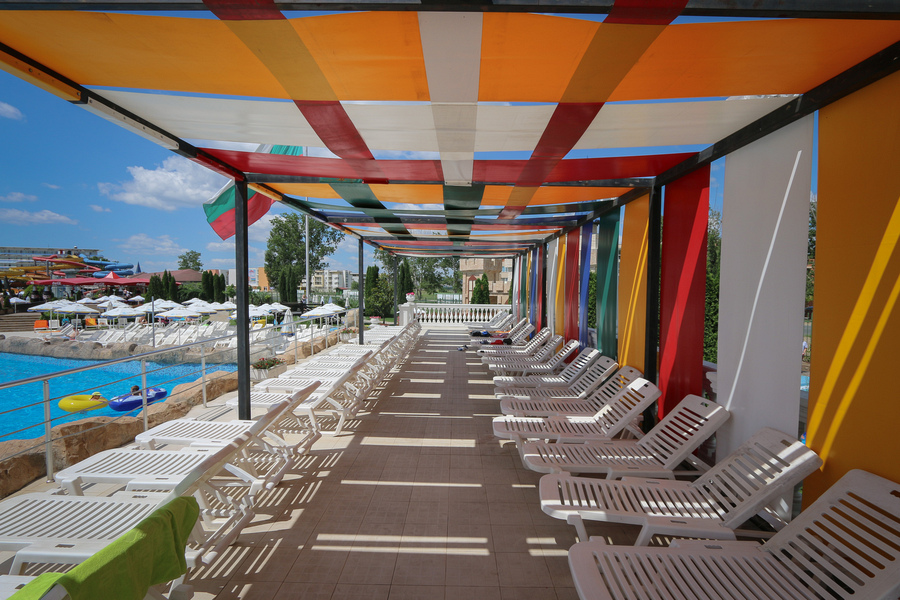 By midday inflatable tubes were surprisingly hard to come by. Throughout the day a lot of guests started taking them back to their deckchairs. We realised most of the available tubes were piled on the far side of the park near the uphill slide. It would have been great if the staff could have re-distributed them through to the rest of the park where the majority of the slides were located. It seems they were all too busy trying to create entertainment for the guests. There was always something happening such as shows, games or races.

The food was as disappointing as Aqua Paradise – cold dry pizza and overdone burgers, however the prices were a little cheaper. They also had a somewhat more formal restaurant (as much as it can be when eating in wet swimwear) where the food looked to be of better quality. 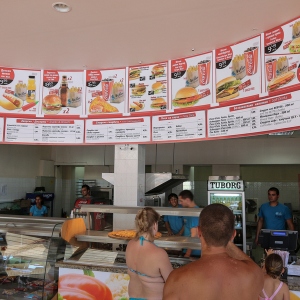 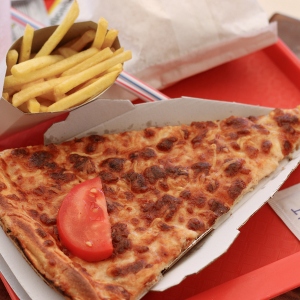 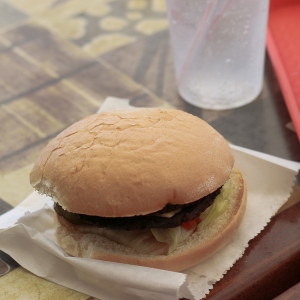 When we entered the park we weren’t allowed to bring in our own food other than fruit and water. But luckily they were happy to store it for our collection on the way out, unlike Atlantis The Palm in Dubai.

As a pleasant bonus, there was a small animal farm which amused the kids. There was a pony, deer, peacock, pheasant, rabbits and a couple goats. Very cute!

Surprisingly, they don’t use a cashless system in the park which is one drawback. The lockers were 5 lev, but since we had to go in and retrieve our wallet every time we had a hankering for a drink or ice cream, I felt this lessened our spending quite a bit.

What To Love: A larger number of slides and multiple water playgrounds for the kids.

And The Winner Is…

Here’s the head-to-head breakdown for each category:

If we had to choose one park, then unanimously Action Aquapark was the better choice. There was more variety and the kids loved the water playgrounds and animal farm.

I’ll be honest, it’s no Waterbom (Bali) and definitely no Xocomil (Guatemala), but the Bulgarian’s don’t do it too bad. If only someone could teach them how to cook a burger then this could be a really great day out.

"I respond to every comment by private email. So please leave me comments, I love chatting to you" - Josh Bender
Posted by Karin on Jun 15th, 2014
Hmm food an issue in Bulgaria but great pics
Posted by Rhiannon on Jun 17th, 2014
Looks fun! Sucks about the food though! Thought Bulgarian food might be more interesting!
Posted by Boz on Jun 18th, 2014
I love waterparks, so loved this article. There was only one big frustration for me - where on Earth is Sunny beach? I couldn't see a reference to the country anywhere"
Posted by Erin on Jun 18th, 2014
Hey Boz, sorry about the frustration there. There are several places we mention where Sunny Beach is, including just to the right in the Tags or above in the Related Posts. It's in Bulgaria! :) Thinking about a visit?
Posted by Kamilla on Oct 16th, 2014
my son and I was at action Aquapark June 9th, he is 8, and 134cm and he had the best day ever, he could try whatever he wanted without momma bear saying no..
Posted by Franz on Apr 2nd, 2016
My soon-to-be 9 year old is going to love this!