The Biggest Thing To Happen To Perth, Australia: Outback Splash

I admit initially I was slightly concerned returning to Perth. It’s not New York City, it’s not even Prague. But had I really ever looked at it through a tourist’s eyes? Or was it just my old hometown, filled with reminders of the mundane suburban lifestyle of being “home”?

As soon as we stepped off the plane in Perth I grabbed a tourist brochure from the airport in the hope of discovering Australia the way my readers want to. Excitingly, we arrived not a moment too soon, because Perth was about to witness the opening of a brand new waterpark. This sort of thing doesn’t happen very often here.

The Maze was not a high priority on the radar of tourists before it’s new owners purchased it in 2006. Since that point the park has been going through substantial renovations and enhancements to put it on the tourist map for Perth.

Our last visit was nearly 6 years ago (pre-kids) and on December 21st we went again. Sure, we were excited for the kangaroo enclosure, the koala viewing, mazes, playgrounds, jumping pillow, mini golf and so much more, BUT The Maze Owner, Paul Woodcock, claimed they had opened Australia’s Largest Water Playground, “to rival the East Coast”. 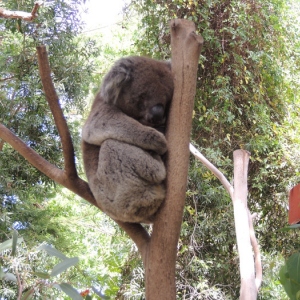 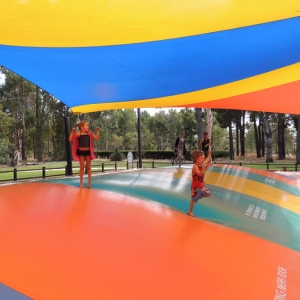 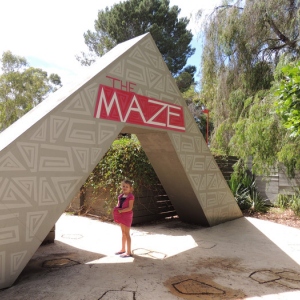 Now that was something to see. 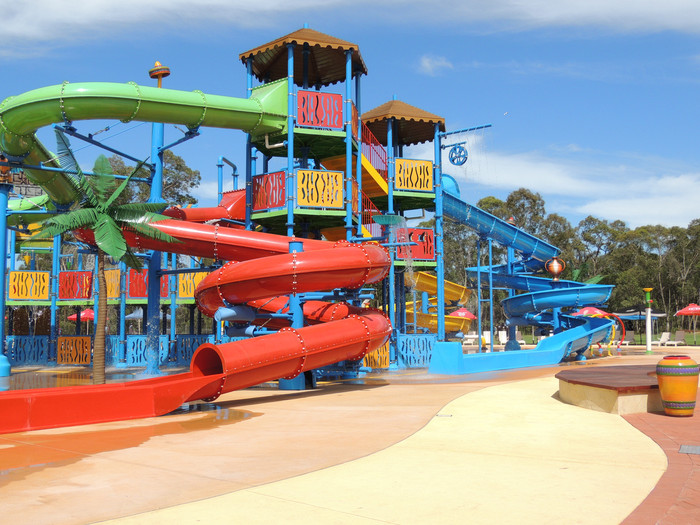 The drive to the park was surprisingly faster than I remembered - only 30 minutes east from the last Mitchell Freeway North exit and there were signs along the way to make sure you’re heading the right way. But once we got there, it couldn’t be missed. I easily spotted the bright, eye-catching colours from the road and the kids infectious gaiety started.

We arrived early and visited the parklands. The grounds are filled with native Australian flora making it the perfect location for a picnic and there are a multitude of activities available. But my kids could not go past the Giant Jumping Pillow, suitable for all ages, covering an area of over 220m2. In fact we returned several times during the day to this highlight attraction. 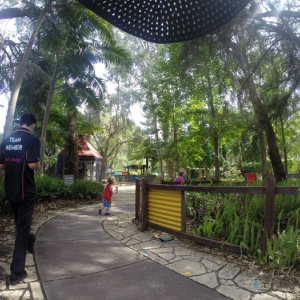 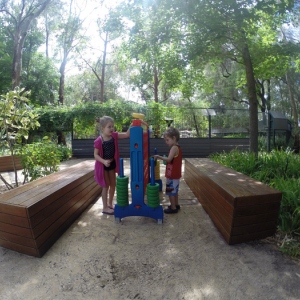 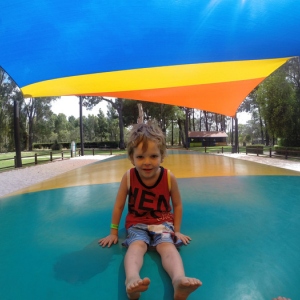 At 10am we moved to the waterpark. As it was the opening, news teams from several local television stations were descending on the park and the atmosphere was electric. The Mayor of Swan, Owner Paul and General Manager Phil ceremoniously got dunked by the large tipping bucket of water to officially open the water playground. 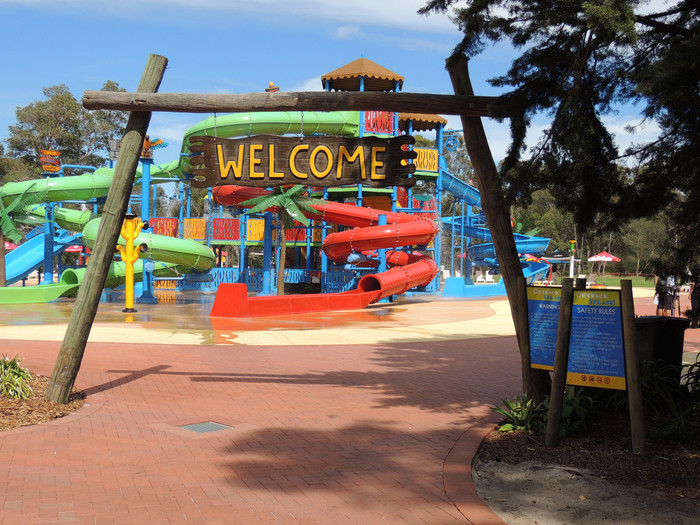 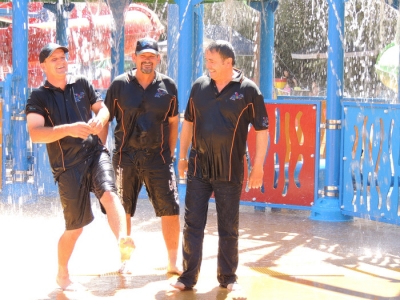 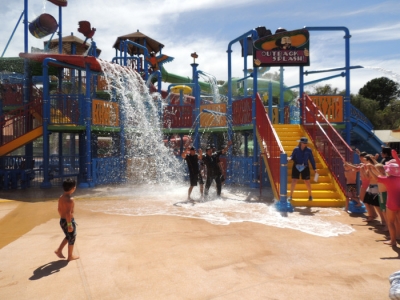 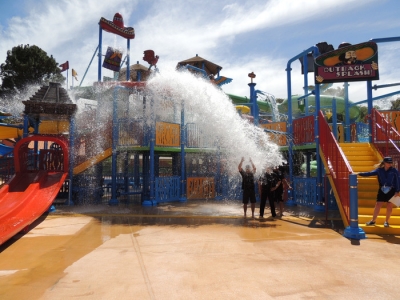 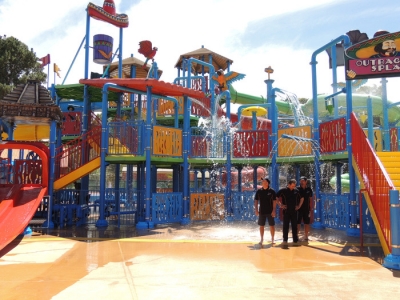 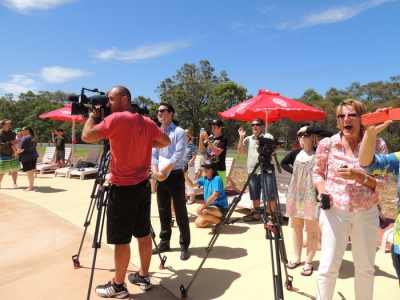 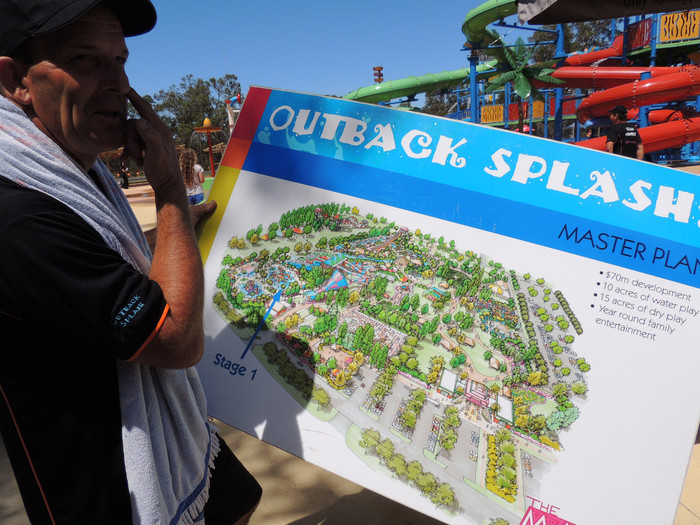 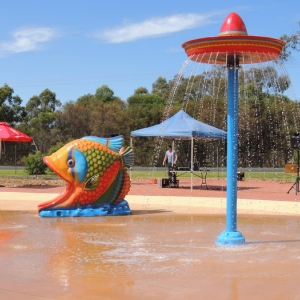 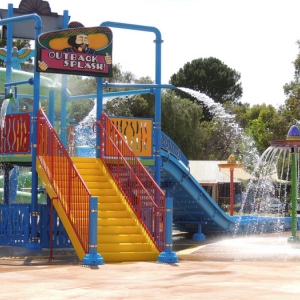 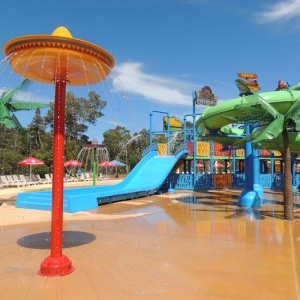 My birthday present made its grand debut on this lovely, warm summer day. It seems I wasn’t the only one as the GoPros were in abundance on all the slides. Mia even got to strap one on for the Channel 7 news. I noticed she also made an appearance on Channel 9 too – a little star in the making! 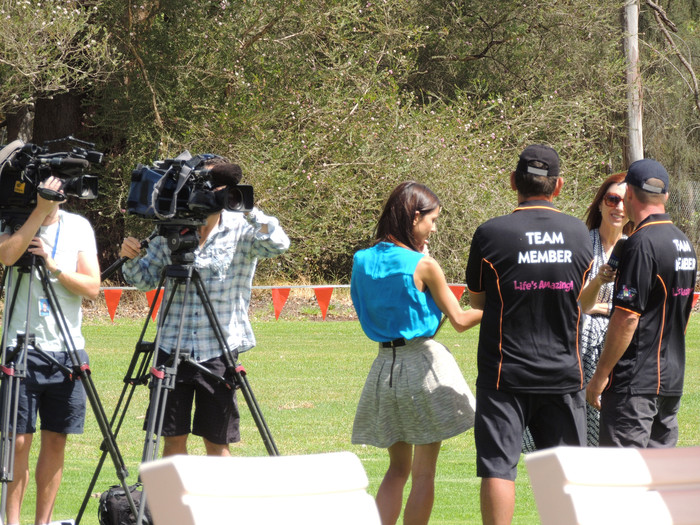 The family slide was a favourite, because we could all go down together. For adults if you pick up a mat the slides are even faster. For little ones they can tackle them mat-less for a slower easier pace. There are 6 slides and the yellow one seemed to be a favourite with both kids returning again and again.

The best part about the waterslides is that they are part of a bigger park. There are so many things to do, so when Mia came back cold and wet, we headed to try and get through the maze. After getting lost in the labyrinth of wooden panels, with the hot sun beating down, it was such a relief to head back to the slides. 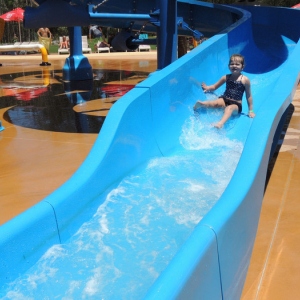 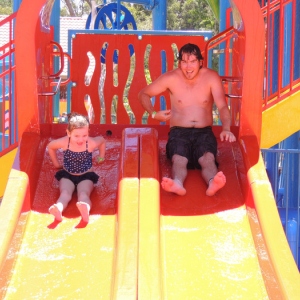 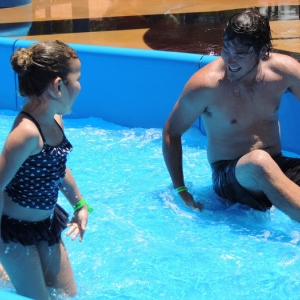 I had planned to leave for lunch, however the kids were not ready to move on so I purchased food from the café. This would be my only drawback for the park as a pricy chicken baguette cost nearly AUD$10 and a kids meal of pizza and chips was one of those microwaved frozen pizzas. I would recommend bringing your own picnic or using the BBQ facilities while there, perhaps heading to the café for an ice-cream treat later in the day.

Finally after 5 hours I managed to convince the kids it was time to go. In all honest truth I didn’t want to go either - I had only managed 3 of the 6 slides, but I could see Caius’ batteries were wearing out. Next time we go back I’d love to take a picnic and stay all day. Or maybe enjoy an intimate breakfast with the koalas one Sunday morning. 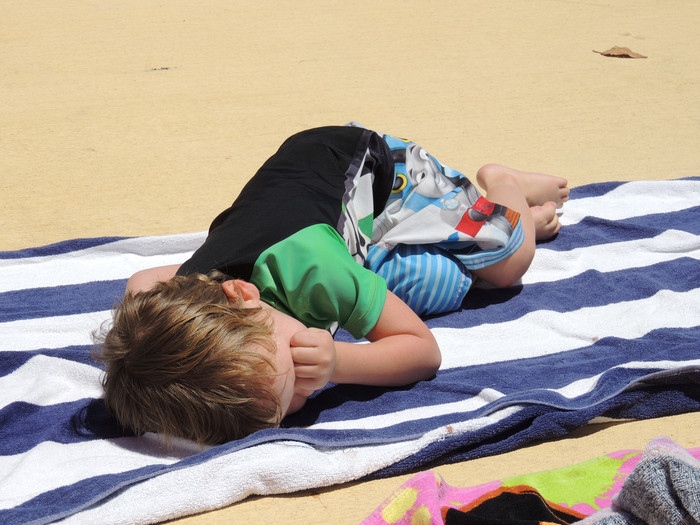 Outback Splash may be Mexican themed, but with a “true blue” name like that and its beautiful bush location, it is an instantly iconic Australian attraction. I am confident that it’s not only a drawcard for tourists but will be making a splash for all the Perth residents as well - and just in time for the summer heat wave. By the time the 6th stage is completed Perth folks won’t need to fly cross-country to the Gold Coast for a world-class water theme park. It will be in their outback-yard.

"I respond to every comment by private email. So please leave me comments, I love chatting to you" - Josh Bender
Posted by Karin on Dec 30th, 2013
Sounds fun
Posted by [email protected] on Tour on Dec 31st, 2013
This is actually on the top of my list for day trips this years. At $33 it sounds like a great day , especially when you compare the price to other adventure parks.