2019 has been a pretty monumental year so far, and not in the least because it dished out the highly anticipated final season of HBO’s Game of Thrones.

The last few gripping episodes pushed hard core fans (including me) to the edge of their seats, jaws firmly embedded on the floor in utter disbelief. I’m amazed that months after the final episode aired, fans are still turning to the Internet to vent their feelings about the 8th season’s plot.

The devilry of Game of Thrones was how it conjured strong connections to central characters before yanking them off the screen with unceremonious deaths. In a twisted way this attached us to the remaining characters, almost like they were part of our collective tribe. So, when we recently visited Croatia, where a large chunk of the show was filmed, we wanted to see the sites where Daenerys kept her dragons and where Cersei took her infamous walk of shame.

But I’m as much of a history buff as I am a GoT fan, so I wanted Game of Thrones tours in Croatia with some substance, shedding light on this Mediterranean country’s history and culture. In Split and Dubrovnik, I booked local expert guides, who walked me through their cities, pointing out historical buildings, their favourite hangouts, and of course, Game of Thrones filming locations where cast and crew made magic happen.

The TV series may be over, but it’s a lot of fun to relive favourite moments by visiting the filming locations on these Game of Thrones tours in Split and Dubrovnik. 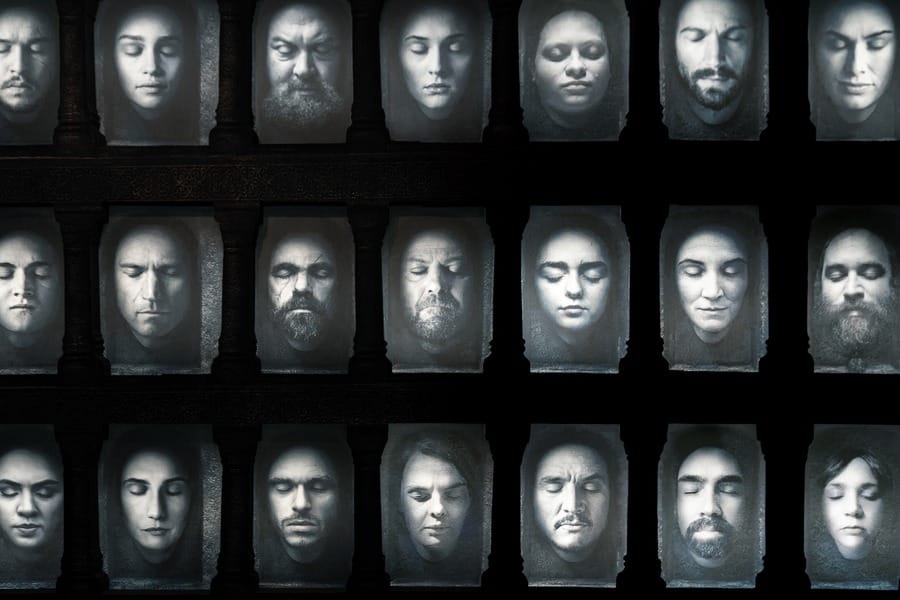 Game of Thrones Museum in Split

My first stop in Croatia was Split, a whirling seaside city centred around the 1,700-year-old palace of Roman emperor, Diocletian. After Diocletian’s death in 316 AD, many locals moved inside the palace walls, and it continued to evolve. Today, the city’s fusion of ancient and modern can be found in trendy restaurants, bars, shops and B&B’s packed tightly within the ancient limestone walls. 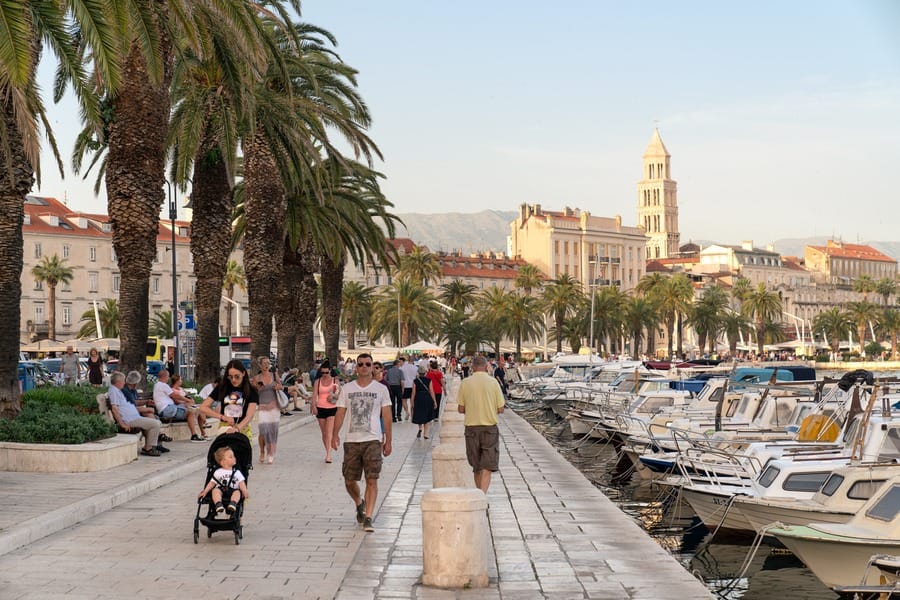 Split’s waterfront with the palace in the background

Split’s antique atmosphere didn’t go unnoticed by Game of Thrones creators, who chose Split Old Town and nearby Kliss Fortress as the filming locations for the city of Meereen, and neighbouring town Kastel Gomilica as the backdrop to the free city of Braavos. We explored all 3 sites on a 4-hour private Game of Thrones tour led by Split local, Filipa, from ToursByLocals.

Our tour started inside the walls of Diocletian's Palace, where GoT favourites like Daenerys, Tyrion, Varys, and Grey Worm were filmed walking down narrow alleyways during their time in Meereen.

Filipa started with a short overview on Split’s history, from the construction of Diocletian’s palace to modern times. Unlike most 1,700-year-old UNESCO heritage sites, Split Old Town is, and always has been, lived in by locals - a “living museum”, as Filipa put it.

A large chunk of Meereen was filmed inside the palace basements, called substructures, so that’s where we headed first. In the west section we found the main hall, where the Unsullied rallied the Meereenese slaves and where Daenerys threatened to feed the slave masters to her dragons. Filipa held up printed screen shots to make the resemblance even more real and told us the Meereen throne room was also filmed in this main hall, with a little help from computer fairies.

We then crossed over to the east section of the substructures which were much less dark and gloomy than the popular west side. Filipa explained the history of the rooms before we came across a corridor I immediately recognised from the Sons of the Harpy massacre in season 5.

I miss you, Ser Barristan Selmy! 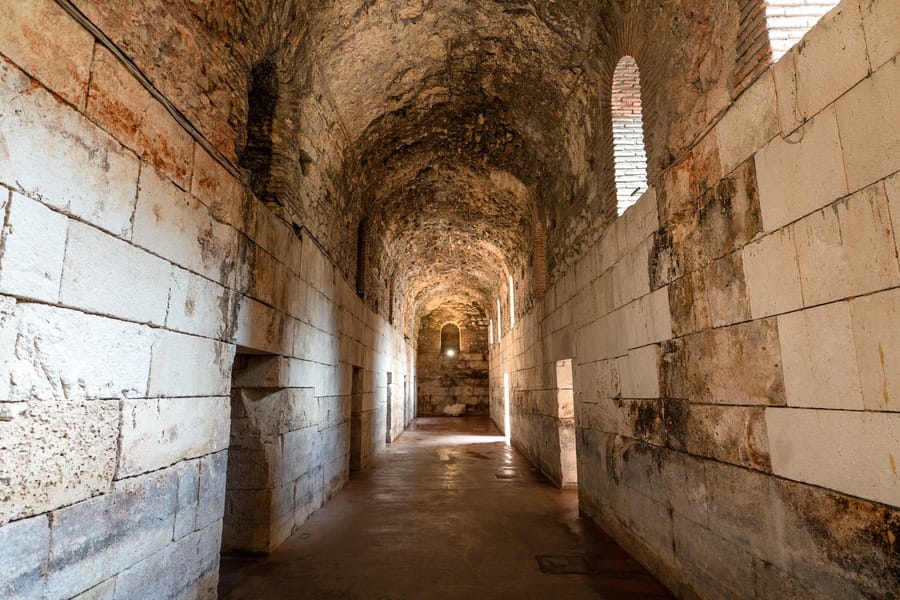 We exited the substructures and wandered through the picturesque alleyways of Split, where Filipa pointed out several landmarks like Saint Domnius Cathedral, the Temple of Jupiter, and the narrowest street in town, the aptly named “Let Me Pass Street”. She also recommended places to visit in our own time, like the Split City Museum, and her favourite restaurants and bars. 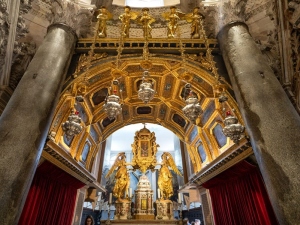 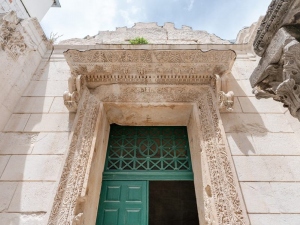 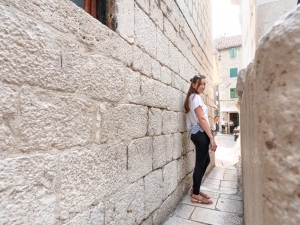 We made a short stop at Papalićeva Street, the filming location of the “Kill the Masters” graffiti scene in season 5, before meeting our driver to the next stops on our tour. 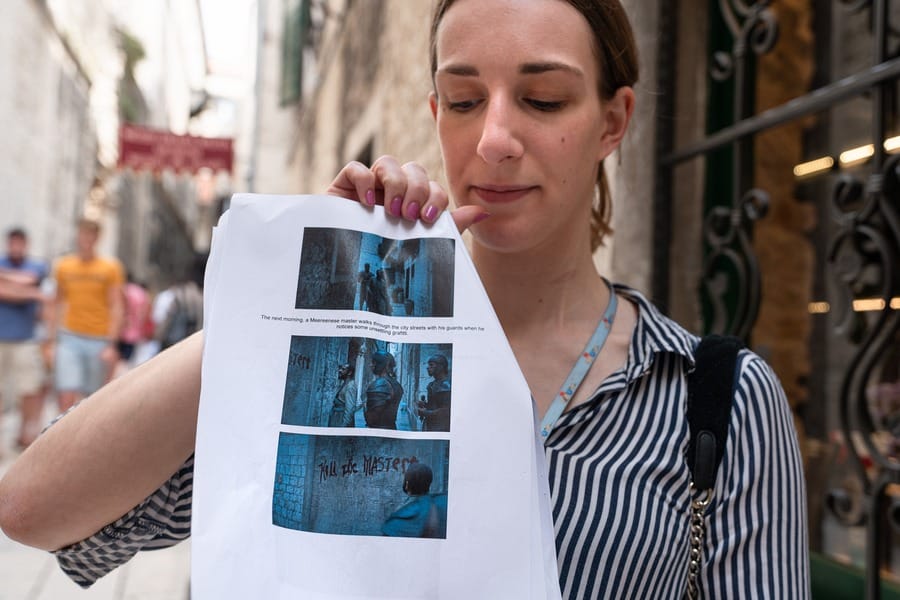 According to Filipa, HBO originally wanted to film the free city of Braavos in Venice, Italy, but since it was too expensive to film in the overcrowded canal city, the sleepy Croatian town of Kastel Gomilica was chosen instead.

We drove about 20 minutes from Split to Kastel Gomilica and I sensed a rare serenity as soon as I stepped out of the car. All I could smell was sea salt, and all I could hear were waves gently breaking against the jetty to the rhythm of the soft sea breeze. I could have easily pulled up a deckchair and spent the rest of the afternoon unwinding in the sunshine, but there were Game of Thrones sites to see! 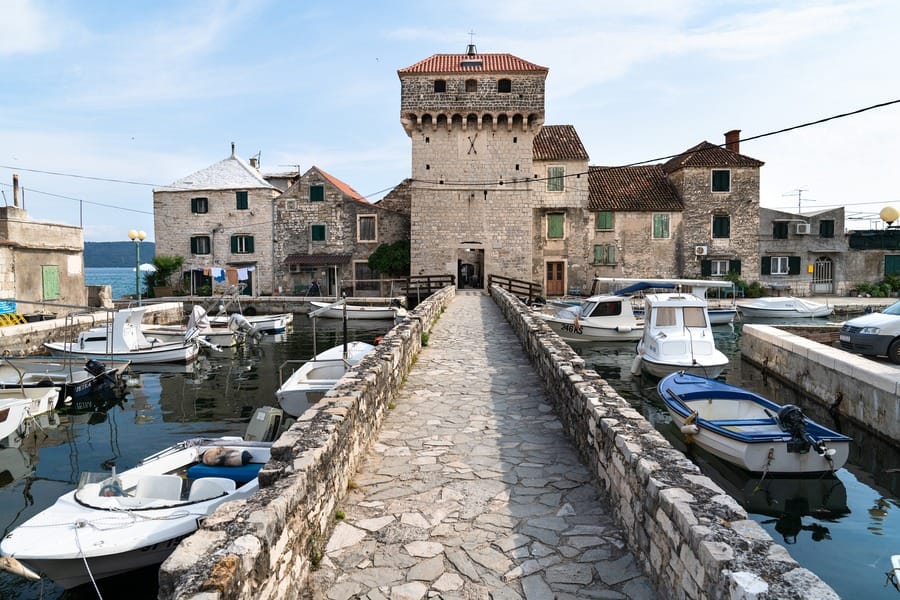 Most external shots of Braavos were created by computer nymphs, but this teeny tiny town is where the Braavos market was filmed and where Arya hid her sword, “Needle”. According to Filipa, locals from Kastel Gomilica were hired as extras for these scenes.

Next, we jumped back in the car for a 20-minute drive to Kliss Fortress. Along the way, Filipa shared more of Croatia’s history and pointed out the best places to taste local wine and olive oil.

Before Game of Thrones, very few international tourists visited Kliss Fortress which Filipa considers a shame since it has such rich Croatian history. Kliss was originally a 9th century castle home to generations of Croatian kings. It was then transformed into a fortress from which Croatian soldiers defended their country during the 16th century Ottoman invasions. 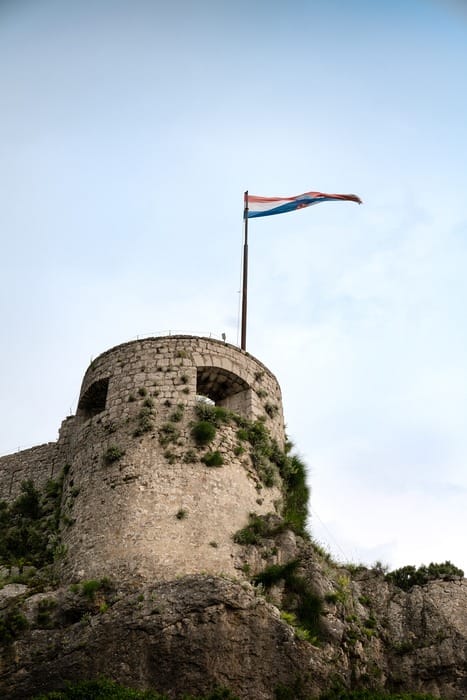 Our driver parked at the bottom of the fortress while Filipa led us up rocky steps to marvel at breathtaking landscapes from several lookout points. The untouched fortress looked quite familiar as the city of Meereen, minus a CGI pyramid or two, and Filipa held up screen shots to remind us when we stood exactly where Tyrian and Varys entered Meeereen, or where Daenerys addressed the people after the bloody disputes between the Unsullied and Sons of the Harpy. 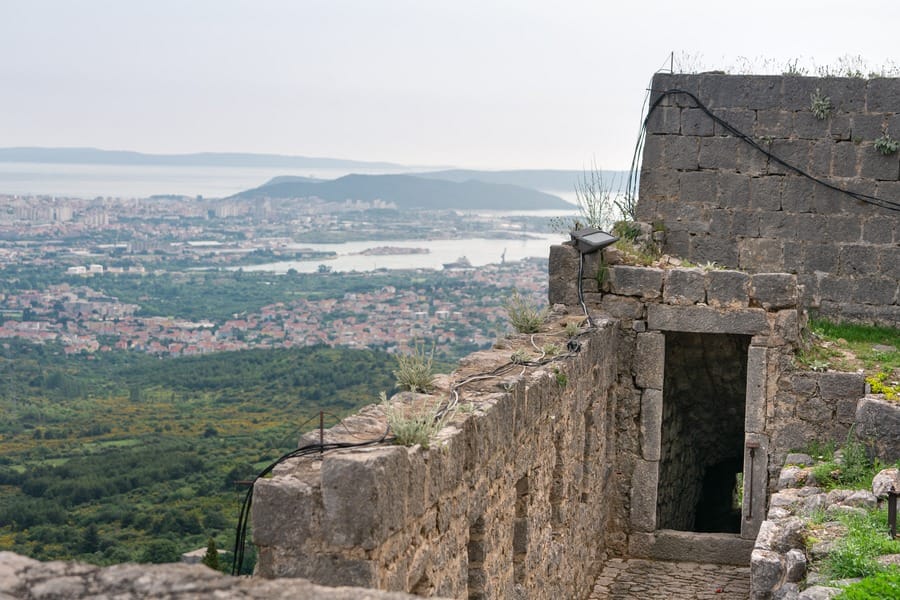 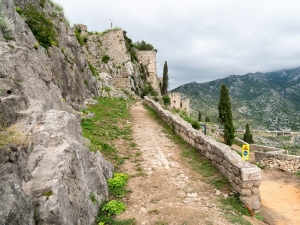 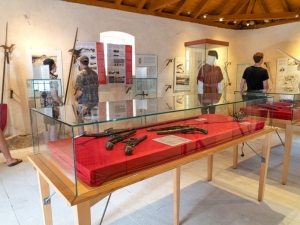 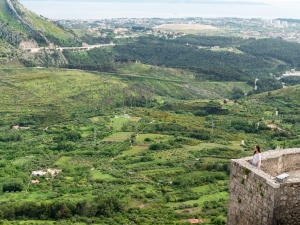 We visited a small history museum, and the door to which Daenerys was pictured entering to visit her chained dragons (who were magically back in the palace substructures miles away). Since we didn’t have TV magic to teleport us back to Split, we walked down to our driver for the short and very scenic drive back.

These 3 locations are standard inclusions in Filipa’s Game of Thrones tour, but she is more than happy to customise your tour upon prior request. We asked to visit a nearby river where Missandei was filmed bathing (in her birthday suit) in season 4, the Roman Amphitheatre of Salona, and a new Game of Thrones Museum and merchandise shop in Split Old Town. 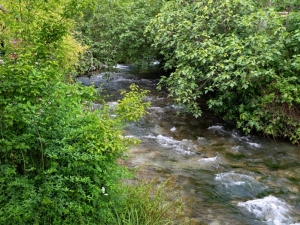 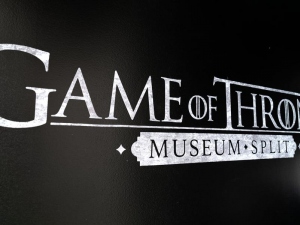 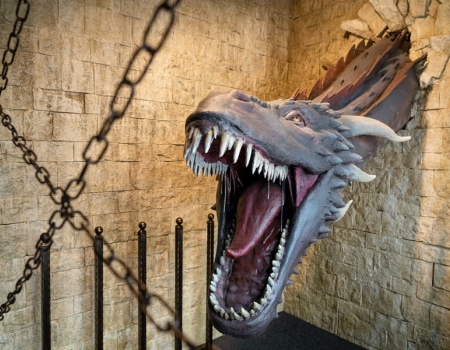 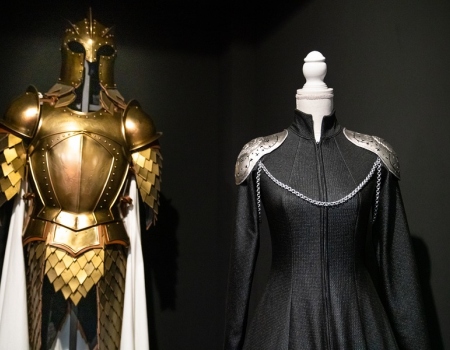 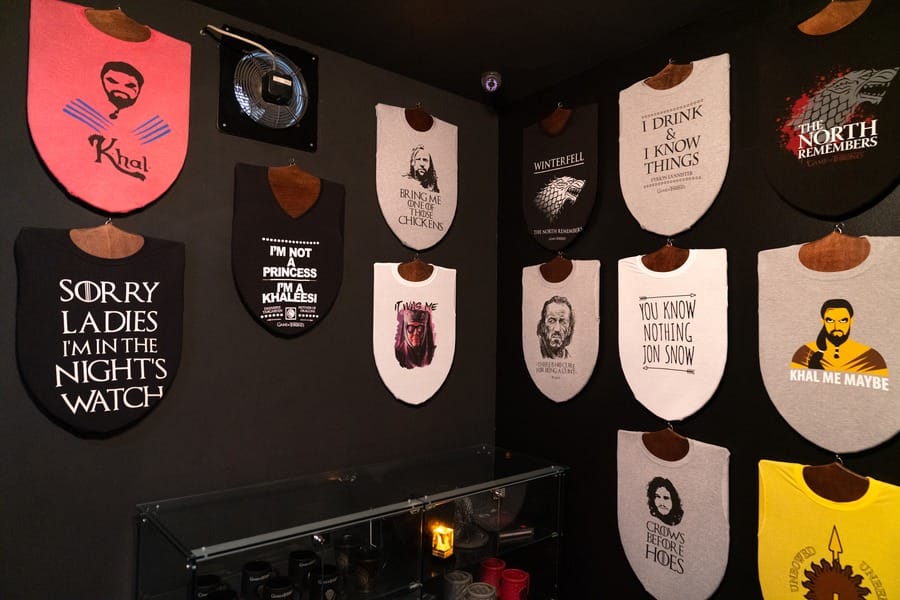 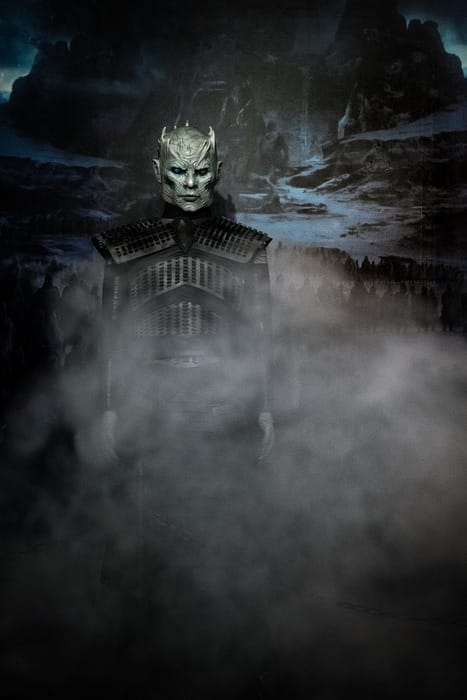 Discover Kings Landing on a Game of Thrones tour in Dubrovnik

After a few days soaking up the sunshine in Split, we hired a car and drove around 3 hours south to Dubrovnik for our second Game of Thrones tour in Croatia… and to sip cocktails by the sparkling sea, of course!

If you thought Split had historic vibes, then Dubrovnik will make you feel like a kid in a candy store. The city’s towering 13th century walls hint at its glory days as a prominent trading city-state rivalling the Venetian empire. They also made for ideal scenery for Kings Landing.

To relive the many scenes set in Kings Landing and learn a bit about Dubrovnik’s 1,500-year-long history along the way, I booked a 3.5-hour private Combo Game of Thrones & History Tour with local guide, Marina.