I stood in the ruins looking through the circular gape or a ceiling watching the clouds roll by. Blue sky littered with floating white clouds passing above it like a framed moving picture. It was so beautiful I wanted to capture the moment and I did, briefly.

Our walking tour with Elizabeth Bell’s Antigua Tours was completely different from our Spanish-Mayan friend Roberto. Our landlady, Ana, put us in touch with Elizabeth, who was recommended her for shuttles and tours. Elizabeth invited us to do a walking tour with her and we decided it would be worth taking the kids this time for a little bit of ruin exploration.

Wow. Elizabeth is a woman in the know. She is formally educated and extremely knowledgeable with an experience that dates back over 40 years. If you need to know something about Antigua she will know. Chances are she helped build it, pay for it or restore it. Although she modestly does not advertise that anywhere. 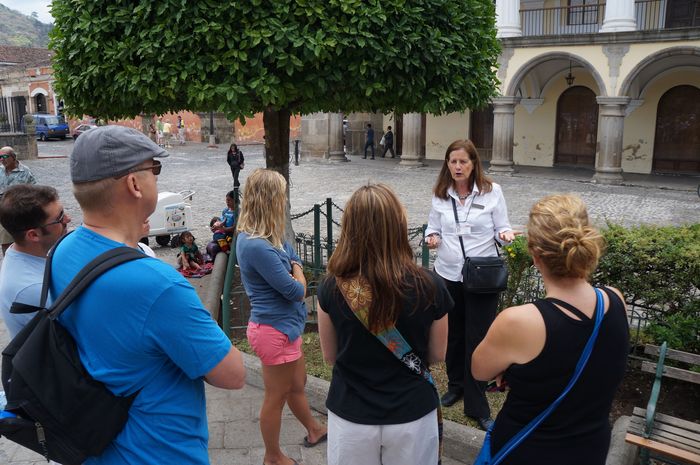 Our day started at 9:30am in Central Park where we gathered with some other tourists. First stop was City Hall on the north side of Central Park. You can come upstairs at any time to take some of these amazing views, but the story behind it was worth listening to. 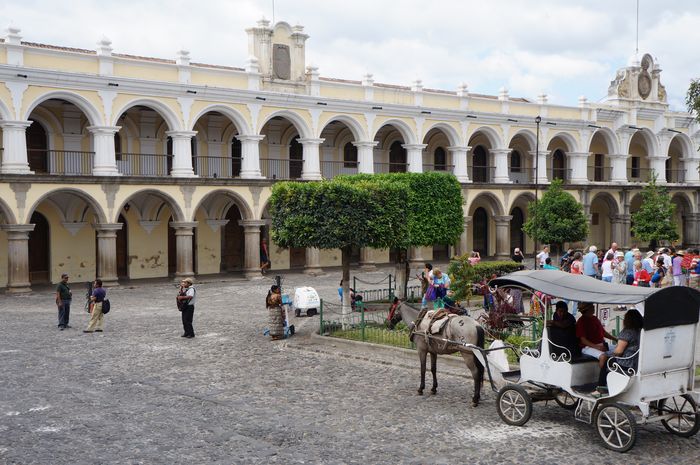 Next stop a quick glace at the south side of Central Park featuring the Spanish king’s crest on top of the use-ro-be palace.  This beautiful building is currently in preparation to be opened as shops and stores, however they will not open it until every last spot is taken and ready.

After a quick lesson here we entered the cathedral, a beautiful old 1600's building housing ancient statues and art. Catholics worship here, but so do Mayans and not to the same god interestingly.  Elizabeth teaches us the history, the religion, the restoration and the use of the processional statues.

Behind the cathedral are the semi-restored ruins of the original cathedral. It has to be my most favourite part of Antigua with a crematorium, burial grounds and more. The kids got good and filthy in here and Elizabeth was thoughtful enough to point out a tap and make sure the kids are cleaned up as the soil here in Guatemala is, well, dirty and causes sickness. 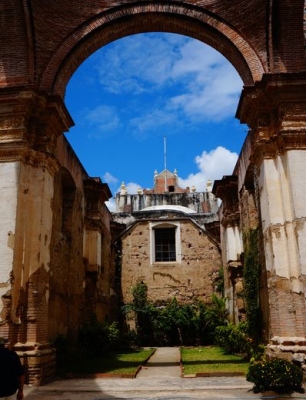 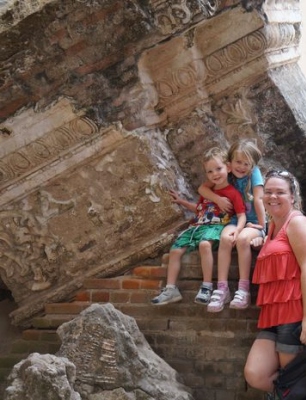 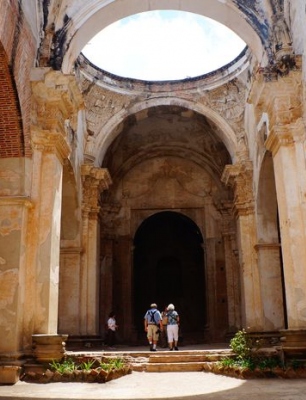 After the ruins Elizabeth walked us through the streets and we ask questions as we went along. Soon we had an inclusive beverage stop at Fusion, opposite my favourite bakery where she sat down and she taught us even more. The staff at Fusion was fantastic and gave me advice on Caius’ tummy pains and offered the kids are free ham and cheese sandwich. We came back for dinner a couple days later. They definitely have some of the best steaks in town.

Once everyone had drunk his or her fill we were on our way to the jade store where I meet the jade queen herself. 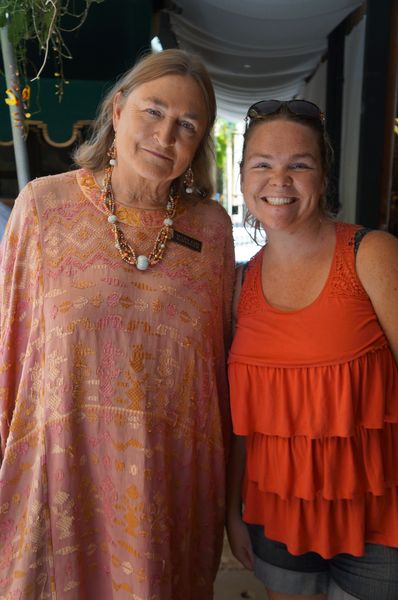 We learn about the different types of jade, how it’s created and got to check out the jewelry pieces. I tried on this beautiful set for US$575, but was declined a photo of the $20,000 pearl and jade set, wow. 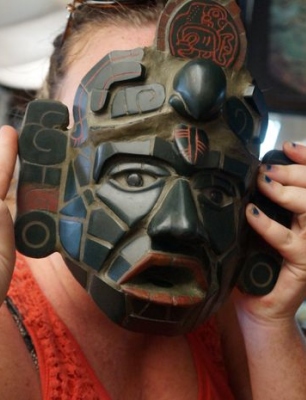 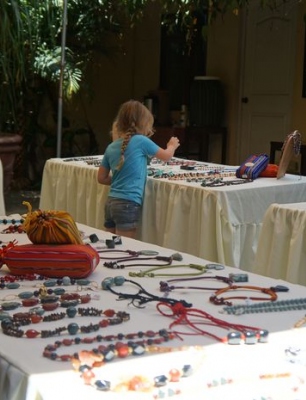 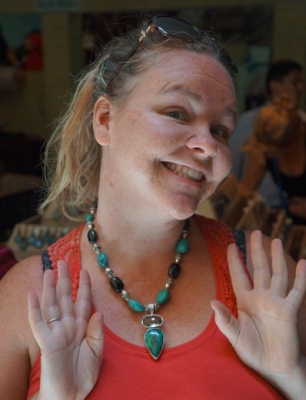 We stopped by Elizabeth’s shop front to grab some maps before heading to Hotel Santo Domingo. A place we had the most amazing brunch a few days early and didn’t even realize what we had almost missed.

Back behind the restaurant the hotel goes on forever, originally a monastery convent it was then converted into a hotel with several museums. It is also one of the most famous wedding destinations in the world, and easy to see why. 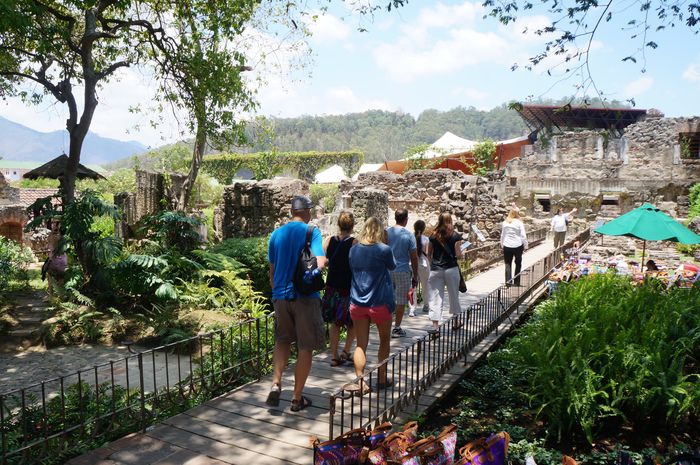 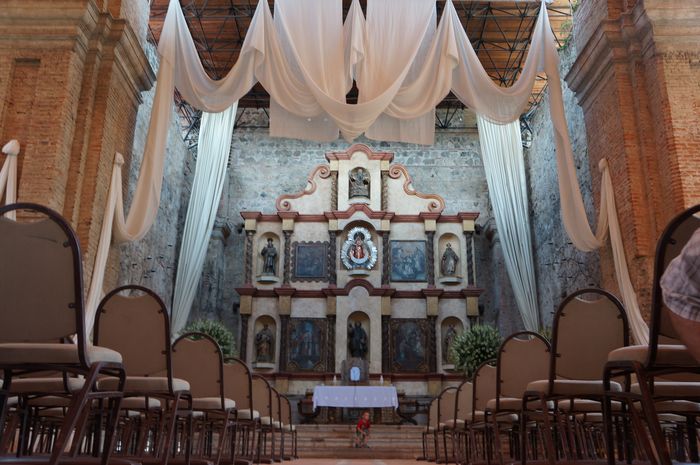 The Museums Promenade is a cultural route created by an agreement between San Carlos de Guatemala University and Hotel Casa Santo Domingo.  It is a route that makes it possible to visit the museums installed in what was the church and convent of Santo Domingo and Santo Tomás de Aquino (Saint Thomas Aquinas) College. During the time of the Spanish domination these places constituted one single unit.

We entered the first museum, which was to the left of the altar in the church. The Colonial Museum contains works produced during the sixteenth, seventeenth and eighteenth centuries, and the beginning of the nineteenth century.  It includes religious paintings, silver pieces such as lecterns, crowns, monstrance’s and chalices; sculptures in domestic woods and great format of archangels, saints, virgins, cherubs, spirits, and painted metals.

Our next museum was the Museum of Pre-Columbian Art and Modern Glass, which offered a comparative sample of Pre-Hispanic objects manufactured in ceramics, stone and other recent glass pieces. These were mostly displayed in glass cabinets and were simply fascinating.

Our last visit within the hotel was the Marco Augusto Quiroa and Artist Halls. They were setting up for the next art display, however what really fascinated me in this place was the glass floor revealing ancient fallen ruins. 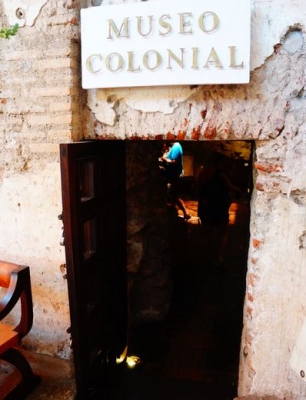 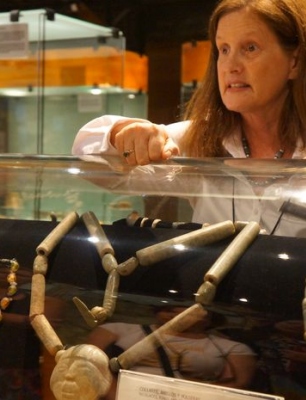 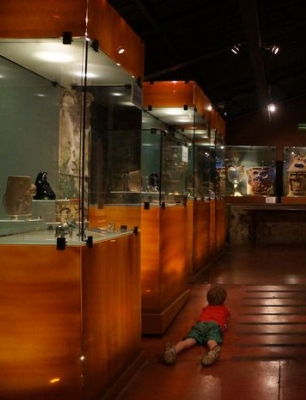 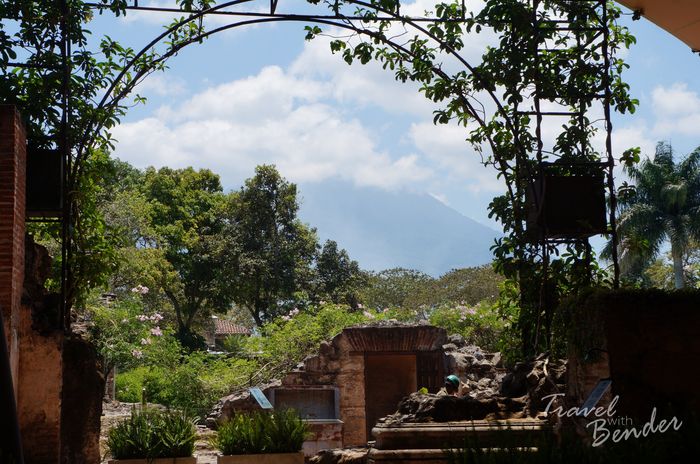 Elizabeth left us there to wonder at will and the crowd applauded her tour with enthusiasm. I know those around me learnt as much as I did. This kind of tour is right up my husband’s alley and he was thrilled with the level of detail Elizabeth presented.

While the tour was not specifically aimed at kids they still had a blast climbing ruins and running amok. I may have missed bits and pieces as I cautioned them from running onto the road and warned them away from several pieces of expensive jade, but they were mostly entertained through the whole tour.

If you want a good dose of history and ancient lessons on the secrets of the beautiful town of Antigua, book with Elizabeth, she is in the know and on the ball.

"I respond to every comment by private email. So please leave me comments, I love chatting to you" - Josh Bender
Posted by sarah on Apr 15th, 2013
Very interesting!
Posted by Nicole @ Suitcase Stories on Apr 15th, 2013
I love walking tours! Its the best way to get a fee of the place you are in. This one sounds great! I hope to visit Antigua soon so Ill put this on the list!
Posted by Heidi Wagoner on Apr 16th, 2013
Oh how I loved Antigua. I love these photo stories so much. Brings back memories and makes me feel like I am there. Wonderful!