Cruising the Coast: Jerusalem to Nazareth

It’s not everyday we get to sit back and relax on a long drive. In most locations we hire a car and drive ourselves around, which we absolutely love. But occasionally it is nice to take the hands off the steering wheel, look out the window, write a few blogs or engage in friendly conversation with other passengers. And in Israel we found the perfect way to do this.

You read about our first hostel stay in Jerusalem, well they also have a hop-on hop-off bus service.  And while our friend Adam (Travels of Adam) managed to make his way around Israel by public transport very easily (you can check out his tips here) we decided the Hop On Hop Off was more our style. 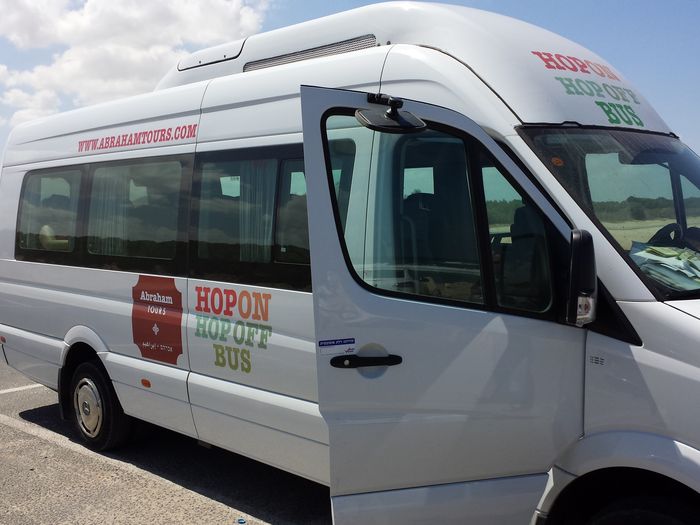 You can plan a route and whenever the bus stops hop off for a few hours or a few days and when you are ready jump on the next bus coming through. It’s a fantastic way to see the majority of the sights in Israel with minimal planning. We decided to do the bus route in one full day with a 3 night stay in Nazareth before another full day heading back to Jerusalem. You can read the journey back here.

Running on Sunday, Tuesday and Thursday this route will take you from Jerusalem to Tel Aviv, Caesarea, Dor-Habonim Beach, Haifa, Akko and Nazareth.  The bus came for us at 7:30am so it was another early start making sure our body clocks were on Israel time. Surprisingly the bus was very comfortable.  It was a mini bus with reclining plush seats, overhead storage as well as boot storage and big windows.

There were a few other passengers, but not enough to fill the bus so we enjoyed spreading out and having some space. Since we had no passengers to pick up in Tel Aviv we actually bypassed it and headed straight to Caeserea.

Caeserea is a favourite of ours. We had been before in 2007, but loved going again and actually made plans to visit quite recently. The town was built by Herod the Great (same guy who built Masada) in about 25 – 13 BC as a port city, basically to suck up to the Romans. It had been damaged by earthquakes, fallen into disrepair and rebuilt many times over the centuries and now stands as a ancient ruin for tourism. 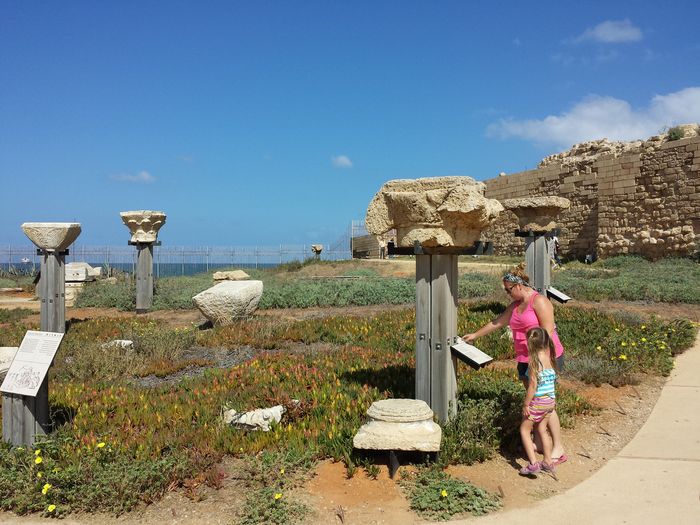 I love the ampitheatre with its ancient steps. I love to sit and imagine what performances they would have enjoyed in those days, pulling in super sized crowds. 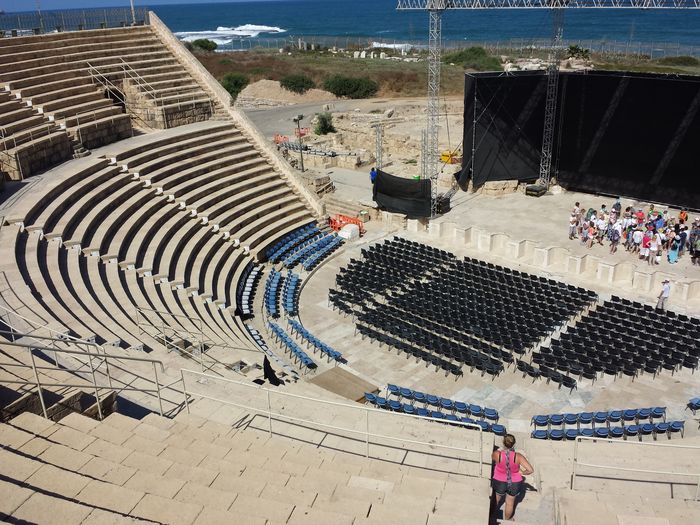 I love the Hippodrome where the horse racing took place. Its view of the sea is spectacular and we had a great surprise with the waves crashing against the ocean wall. 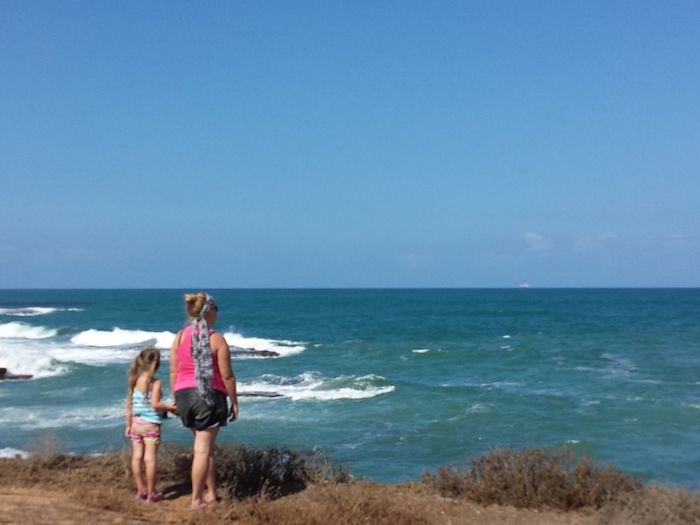 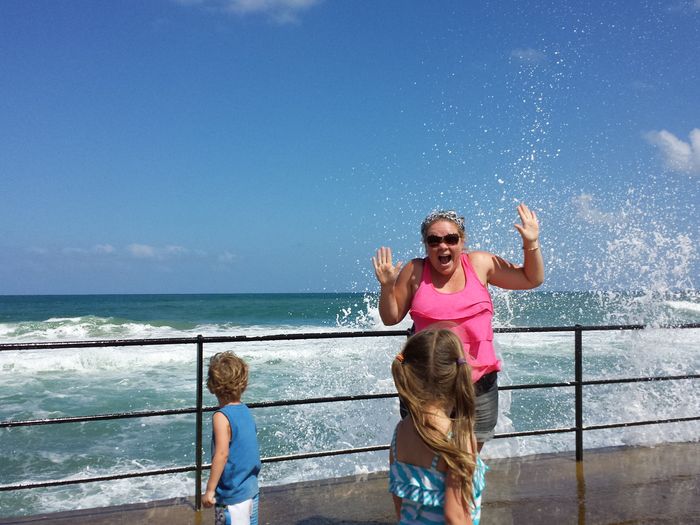 Towards the northern end there is a theatre where you can watch a short documentary on the periods and powers of Ceaserea. While we were waiting we were invited to check out a hologram display where you could ask questions to different hologram figures about their time in Ceaserea. I found this fascinating and the kids were enthralled with the flickering computerised characters materializing out of thin air. Caius particular had to say goodbye several times to each character before he could even leave the room.

We ran out of time to see the second free movie and are determined to go back. This place is magical. 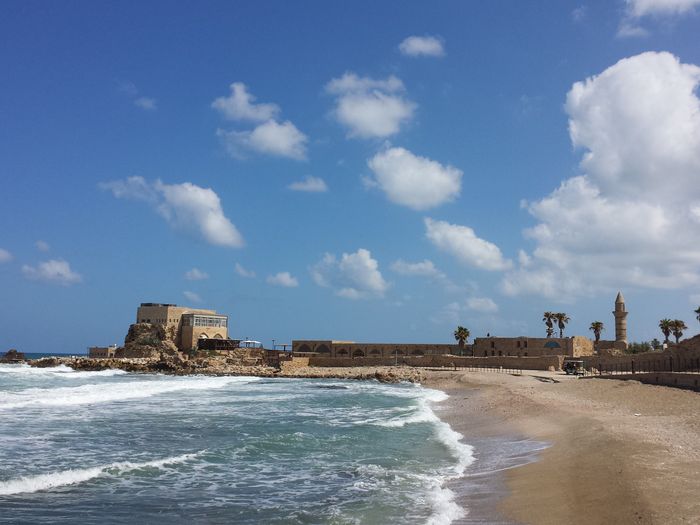 After Caeserea we stopped for a quick photo opportunity at the aqueducts along the beach. It wasn’t long enough and we knew we would come back to see this amazing construction feat. 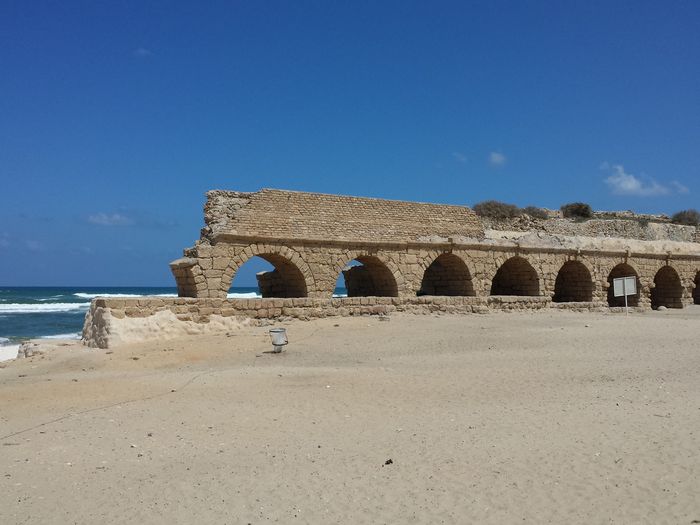 After a quick stop in a small village to pick up some shawarma and salad our guide dropped us off at the beach. They brought out a giant fold-out mat for us to sit on and our group chilled out for a picnic lunch and some fine conversation.

Not many people made it in the water as we spent the time on the beach chatting and playing matcot. Matcot is a popular paddle ball game in Israel similar to beach tennis, often referred to as the country's national sport.

One of our guides was studying religion and history and was an absolutely fascinating guy to talk to. It was all-too-soon he had to stop regaling us with his stories to get back on the bus.

Our tour driver was fantastic. While the tour caters for independent travel, he was so knowledgeable and filled us in on each area as we drove there. He would let us know what there is to do and we often caught him wondering around checking in on everyone and making sure they knew where to go.

We only had a quick stop in Haifa to take snaps of the Baha’i Temple, which was fine with us since we lived there. We had been to Haifa plenty of times and the Baha’i Temple is definitely worth a visit if you are dropping in. 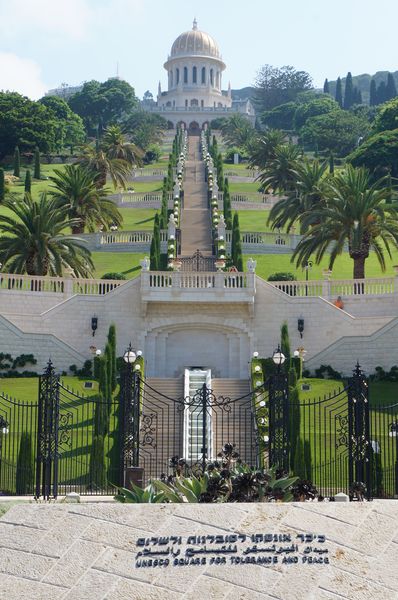 In the Western Galilee region of northern Israel at the northern extremity of Haifa Bay is Akko. The city occupies an important location, as it sits on the coast of the Mediterranean, linking the waterways and commercial activity. It is said to be one of the oldest continuously inhabited sites in the world with first settlement dating back to 3000 BC. That’s old.

The city is mainly known from its Crusader days and after a quick dash through the market we decided to visit the Templar Tunnels underground. The Templars were a military-monastic order. The tunnel is 350 meters long and it extends from the Templars fortress in the west to the city's port in the east. It crosses the Pisan quarter and in the past served as a strategic underground passageway that connected the palace to the port.

The walk was cool and interesting with lots of head-ducking moments. There were animated stories playing in the dark tunnel with a choice of listening in English to the stories of the Templars. It was a quick walk, but one we enjoyed. 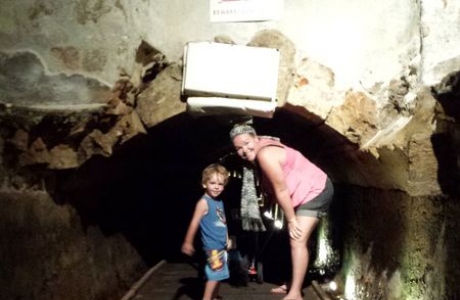 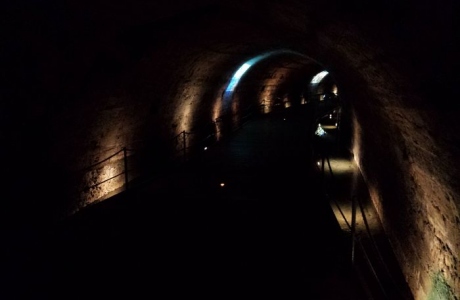 Back at the bus we waited for everyone to arrive and were rewarded with a glass of bubbly overlooking the ocean with our new friends. 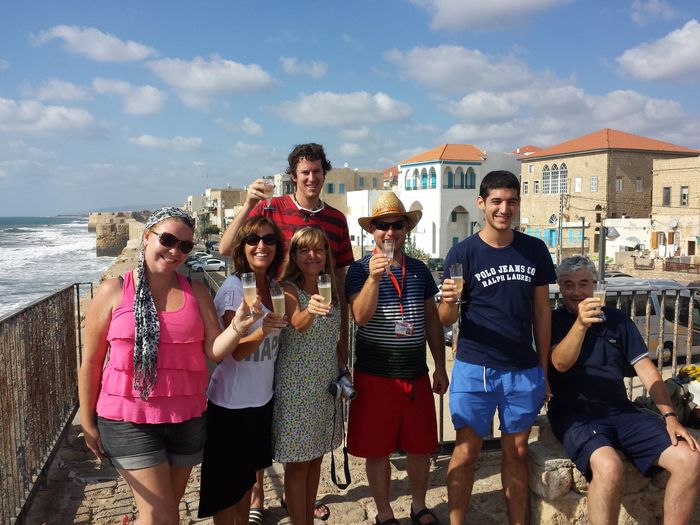 Our final stop was Nazareth where we would plant ourselves for three days until the bus returned for the Jordan Valley route. As we drove in our bus was unable to transverse the tiny roads to the guesthouse, so we took a quick walk from Mary’s Well at the centre of town to Fauzi Azar Inn (read more: you won’t believe what is happening in Nazareth).

We waved goodbye to all our friends and our wonderful driver and headed to our new home. It was a brilliant day and I loved not being behind the wheel. With 3 nights to rest in Nazareth I couldn’t wait till our trip back.

"I respond to every comment by private email. So please leave me comments, I love chatting to you" - Josh Bender
Posted by karin Holmes on Aug 4th, 2013
So much history,