Wildly out of control in pitch-blackness with only the downward slope of the tunnel and the gushing water giving you direction… then BAM! You are out of the tunnel spinning around and around in a large dark cavity. But wait! There is a small hole in the middle of the cavern with a shimmering blue glow. You try to prevent the fall, but the slippery slope and running water leave only one way out. It is inevitable. Headfirst with a clumsy attempt at a dive through the blue opening and SPLASH! 9 feet deep of startling cold water greets you.

The Mexican sun is hot. It might be under 30C, but the sun is a scorcher. There was only one thing to do. Head to a waterpark.

And what better way to spend the day than eating, swimming, drinking, swimming, eating, swimming, and drinking. That’s right ladies and gents I have found a place for everyone and it’s Wet N Wild Cancun. Situated at the southern end of the Hotel Zone in Cancun on the magnificent aqua waters of the Caribbean is this all-inclusive waterpark. 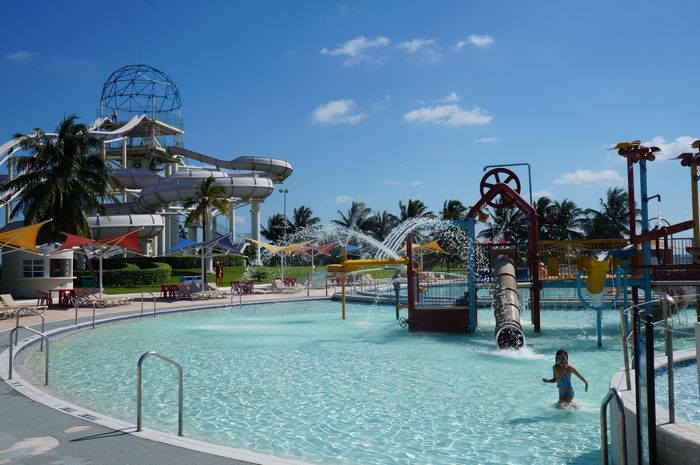 The park is not overly large. There are only 4 waterslides (each doubled to allow maximum people, or 7 in total), a lazy river, a wave beach, a small kids aquatic playground, a few pools and bumper boats. And I do believe the number of food and beverage locations almost outnumber the slides itself, with 6 outlets. Between eating and drinking all day we found plenty of stuff to keep us busy for 4 – 5 hours.

Out of the 4 water slides, I have to mention the Space Bowl. After climbing the stairs to the top you launch yourself through a chute at about 30mph to pop out of a giant bowl into 9 feet deep water. The ride is crazy and one has an open bowl so you can see what is about to happen. The other is all pitch black. I admit to going on these slides 4 times, they were hilarious! Check out the video below.

The food in the park is typical western fast food. But if you order the right thing you can eat well. My favourite was the wood-fired pizza, freshly made and the salad. The kids loved the bowls of pre-cut fruit and the French fries. There were hamburgers, hot dogs, nachos, pizza, tacos and even a seafood paella. My son devoured the refried beans and rice like there was no tomorrow. We also enjoyed a few ice creams and iceypoles (popsicles) while there too. 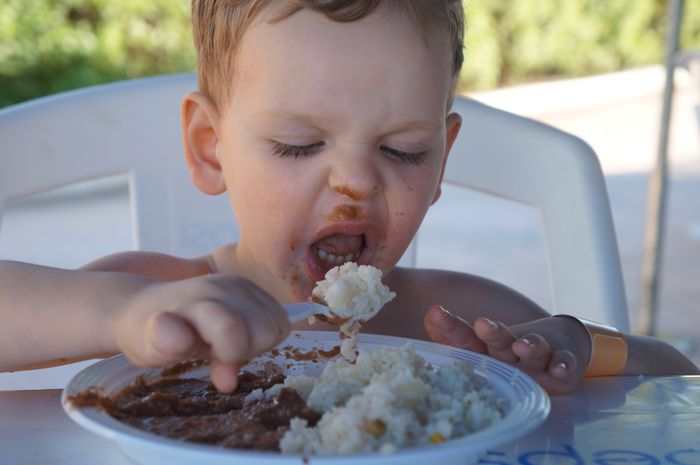 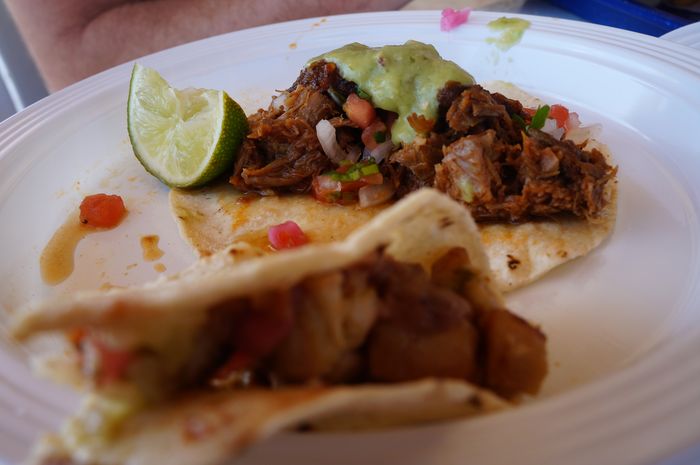 On tap throughout the park are Pepsi and Coke beverages. There are also several bars to purchase Pina Coladas, Screwdrivers and more - all included in the price and served to you in a plastic cup with a straw.

I am not sure how old the park is, however the scariest part of this day would have to be those rusted metal and broken concrete stairs up to the rides. I’m hoping they are working on these, because I studiously tried to avoid looking at them to avoid freaking out.

Once at the top of the stairs your worries cease. The views are inspiring and breath-taking. Aqua blue seas, white sand and gorgeous tropical trees all to view while waiting for your turn, which was surprisingly fast for us. 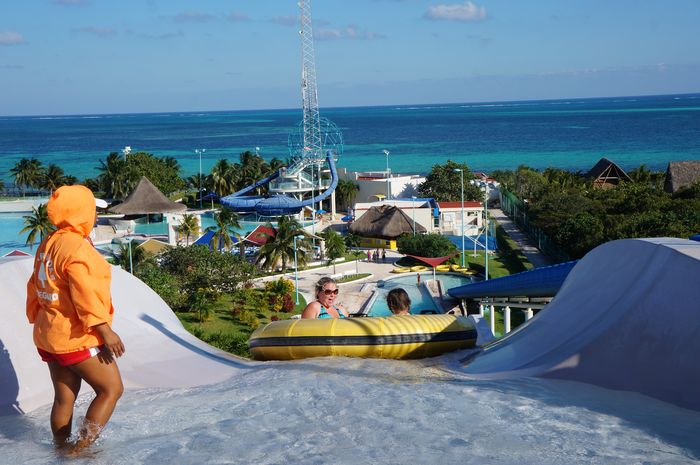 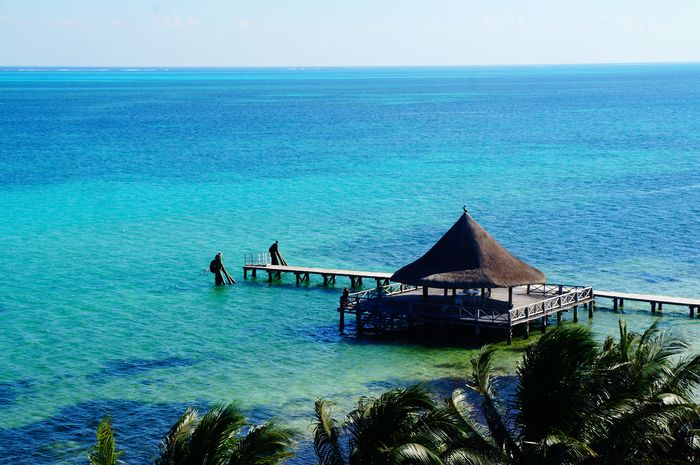 All slides are for 42 inches and above so my 4 year old was happy to go on all of them, except the Space Bowl and Kamikaze. After seeing an older lady unable to swim fall head first into the 9 foot deep pool of the Space Bowl and sputter around we decided against this one (important to note they have life guards at the ready with floating devices for those who can’t swim).

My 2 year old was happy to chase the numerous birds around the park. Please don’t leave your food unattended or even hold a chip in the air. Noticeably the park is taking precautions against these very fearless birds, but they are still lurking about. He also enjoyed the kids play area and the wave pool.

The bumper boats were also a favourite for my daughter and son. We went on these twice and just floated around bumping into each other, which my daughter found much ticklish glee. 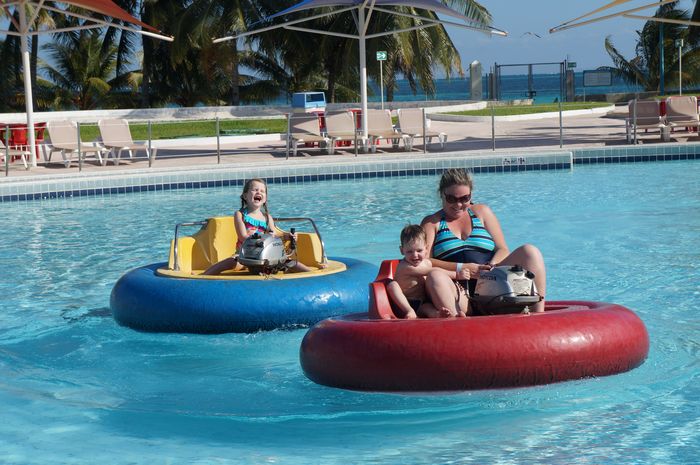 We couldn’t find any tubes to go in the lazy river, so did not check this feature out. A staff member told us that they were being replaced.

There are a few items not included in this all-exclusive waterpark, which we found a little unusual. You have to pay an extra $4 to get a locker. I’m guessing this is for number control if the park is full and you cannot obtain a locker. Also apparently the tubes for the lazy river need to be rented, as do towels. We didn't bother with towels since we usually dried within seconds of leaving the water.

Swimsuits, photos, gifts are also available for purchase in the park. But the best thing you can purchase seperately is a swim with dolphins. We were unlucky enough to not have any time to for this, but we did watch for some time as people interacted with those gorgeous smiley creatures in the water.

We loved the fact that food and drinks were included though. Kids get hungry in water and after 30 mins to 1 hour of playtime there was always the “I’m hungry” moan and we could quite easily saddle up to one of the restaurants and let them eat till their hearts content.

Overall we found this waterpark extreme fun, and the food and drinks is a massive bonus. Adults are $49, children ages 3 and up are $43. If you get there at opening 9am and leave at closing 5pm you could actually get 3 meals out of this price!

There are plenty of deck chairs around the park, however shade is a bit limited so bring a whole lot of sunscreen. Other activities are also included such as water balloon fights and more. There is also a DJ on site pumping out sometimes loud, but very atmospheric music. 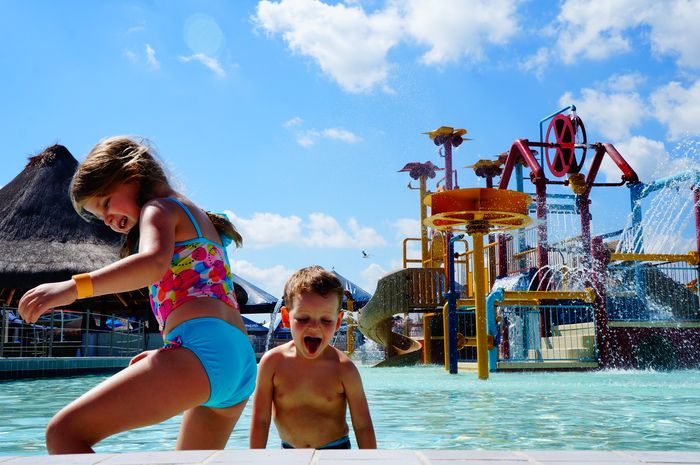 March is a high season for them, which I would avoid. If you can imagine a whole bunch of college Spring Breakers drinking and sliding all day, it’s probably not the time you want to take the kids.

Would we go back? For sure. It’s great value considering the other parks we have been to. A great way to stay cool and entertained on a hot day in Mexico without the sand in your pants.