Driving down the road I spotted Gurney. This is the shopping centre I had been looking for. I passed a do not enter sign, so kept driving. Finally I flick on my blinker, pull in and suddenly there is a cop in front of me asking me to pull over.

I turn to look over my shoulder, look around. There is no ‘no-entry’ signs. There is a no right turn sign that he is pointing at.

“You mean that? Doesn’t that mean that when I get in here I can’t turn right?”

He shakes his head and explains that it means I can’t turn in here. Since I was following a motorcycle, I proceed to ask him why the motorcycle is allowed to, but not cars.

“The motorcycle went straight, I could not stop him in time. You turned towards me so I stop you.”

“So how about I back up and go straight so you don’t stop me either?”

He is not very open to this idea and asks me for my address so he can make the ticket. He then tells me that his friend has already taken down my number plate so he has to prosecute me and I have to pay the fine of 300MYR ($100).  We argue the point continuously about how the sign is not accurate and how ridiculous it is that he didn’t stop the motorcycle. Finally he asks me for my driver’s license. I am so glad I got that stupid $35 piece of a paper from Australia, this is the second time I’ve been asked for it. I am also relieved that since I left it in our last hire car, I had just returned from picking it up that very day!

“I live in Batu Ferringhi, I don’t have an address, I’m a tourist.” I explained

He responded, “I need your address so I can make the fine.”

I replied, “I don’t know my address.”

He walks away like this is all too hard and I glance at my watch knowing that I am going to be late for my movie that starts in 5 minutes.

He comes back and says “Perhaps my boss will be okay if you give him some money.” 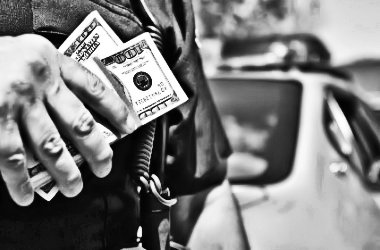 I blink quite slowly. Did he just…? Did he ask…? I think he just asked for a bribe in the nicest Malaysian sincere way. I look at my husband, “he wants a bribe.”

By now my husband is keen to get out of this mess and go to the cinema, “how much?”

“Well the fine is 300MYR so maybe 100MYR will be enough for my boss to not make the fine."

I love how this is not about him at all, but about some “boss” who he is working for. Josh has had enough with all this nonsense and does not even both to haggle with him and reaches over to give him the 100MYR ($33AUD).

“No, no, no” he stresses. He pushes our hand down below the window and says we must do it like this. He puts his writing pad into the car covering the money and takes it out wishing us a nice day and letting us go. josh says to me, "Hopefully he buys his kids something nice."

I have just bribed my first corrupt cop… or rather I have accepted the suggested bribe made by a corrupt cop.

I have to say I am very surprised. In an Islamic country like Malaysia where there are strict religious codes of conduct I did not expect the police force to be filled with such men.

While we were in Bali we thought everyday we would be pulled over and have to bribe a cop, but in the 2 months we drove we were only once pulled over and after giving them our International Drivers License we were waved on. I have to say I am very disappointed this would happen in Penang, our island paradise.

Have you ever had to bribe (or accepted a bribe) from local law enforcement? Where were you? Join the discussion below.

We asked the question on Facebook and got some very different and amusing tales. Check them out:

"I respond to every comment by private email. So please leave me comments, I love chatting to you" - Josh Bender
Posted by Malaysian Meanders on Oct 5th, 2012
My friends driving from Penang to KL were pulled over and told that they should pay the fine directly to the cop. Hmmmm.... Interestingly, he was nice enough to make sure they still had enough cash to pay the tolls for the rest of the way.
Posted by Amanda on Oct 5th, 2012
I've never bribed a cop, but I was on a tour this summer where we bribed border crossing guards in Albania and Montenegro so that our large group could cross the borders without stopping to get our passports stamped...
Posted by Erin on Oct 5th, 2012
Malaysian M - what a nice cop haha.
Amanda - why didn't you want your passport stamped?
Posted by Sam on Nov 6th, 2016
I forgot to bring My passport one night when i went on a walk. Cops stops me and ask for if which I said it's in the hotel. So he wanted me to pay 2000 ringgit or I spend 3 nights in jail until my embassy sends my id to the police station.