My mother is one of my bestest friends. Of course it hasn’t always been like that. She started off as my source of life and growth. She brought me into the world. She became my complete dependence as she fed and nourished me. Later she became my discipliner as I found my voice. It wasn’t too soon after that she became my enforcer and my director. My voice of wisdom, despite my deaf ears. During my teenage years she was an after thought and finally as an adult she became my confident, my judiciousness, my friend. 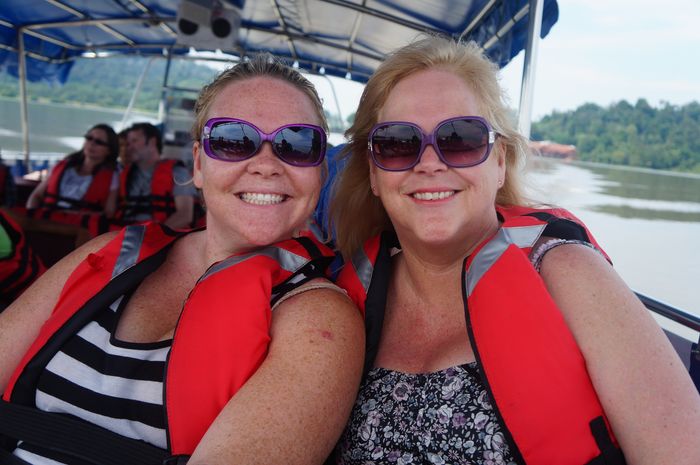 It had been many months since I had seen my mum. Well not exactly. We Skype nearly weekly so I do see her, but that’s not the same. When I lived in Australia my mum lived 5 minutes away from me. She was in the perfect location for the pop-in and a babysitter. And now we were flights apart.

When she decided to come visit us in Penang not only was I ecstatic, but my husband was ecstatic (babysitter back), and my kids were over the moon. We counted down the days to her arrival and then it was time to pick her up at the airport.

We went many places in Penang with my Mum including Penang Hill where my son got concussion (thank God mum was there), but there was one journey we wanted to take with her and that was to Orang-utan Island.

Across Penang Bridge and a good hour past that is a place called Bukit Merah. There in the middle of nowhere is Orang Utan Island. We ended up buying a 3 park pass to the island, animal park and water park. Don’t bother. Maybe if we had stayed the night we would have had time, but we didn’t and it was a waste of money. You can use the ticket over a 3 day period, however we had no plans to return all the way out here.

There is a boat that takes you across the murky river to a small island. On that island is where the orang-utans live and you are in the cage. A caged walk through goes through the middle of the island where the orang-utans play on ether side, staying close to the cages because of the food stations and to entertain themselves with the humans visiting.

What a beautiful idea. One young one was especially entertaining. Climbing a tree, grabbing a vine and pushing off the tree to spin in circles before the thin vine could no longer handle his weight and he crashed to the ground. To the delight of us caged humans he shook it off, climbed the tree and started all over again on another vine.

Despite watching these amazing creatures the walk was hot and we quickly headed back to the boat. Before the boat is a nursery centre with baby orang-utans pulling faces through windows. If we only came for this it would have been worth it. 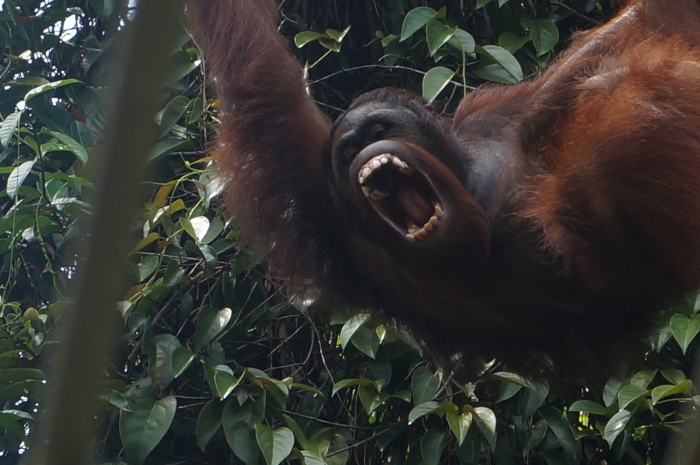 We took a rickety sky ride over the water park while Mum offered to stay to watch our sleeping boy. The water park looked old with peeling paint and rust. We already knew we would probably skip it from that view.

It was so hot by now we decided to eat lunch in the air-conditioned restaurant and stayed for quite some time. After that we checked out the wildlife park, which unfortunately while quite large and nicely set out, did not seem to be treating their animals with any amount of the love lavished upon the orang-utans on Orang Utan Island.

Hot and tired we finished there for the day and made our way back over the bridge home again. If you have a spare day I would recommend Orang Utan Island no problems. They are such fascinating and entertaining creatures.

Just skip the other attractions.

"I respond to every comment by private email. So please leave me comments, I love chatting to you" - Josh Bender
Posted by Laurel @Capturing la Vita on Jan 10th, 2013
What a beautiful experience to have with your Mum! She must be so proud of you and your family. I know I would be if my kids chose that life. So wonderful for you to be offering experiences for her as well.