Universal Studios, Singapore: Not Just For The Kids

Nope, this is not my children at Universal Studios. This is me!

Our third day in Singapore, after getting the free tickets from RWS Invites we headed to Universal Studios. It opens at 10am and really there is no point getting there earlier to line up, just walk in after everyone else is in there about 10:30am.

Our free tickets got us an Express Pass, now I don’t know if you have ever been to a theme park with 45 minute queues and tried waiting that out with toddlers, but it definitely would NOT have worked. The Universal Express gets you to the front of the line. Yup, you do get that smug smirk on your face as you walk past all the people in the queue and head to the front where like royalty your seat awaits you and you sit down before anyone else. VIP, yes please.

To the right as you enter is a rental area where we hired a double stroller/car/pram thing for AUD$12. Mia and Caius could both fit in, the bag could hang and I didn’t need to freak out wondering which way the kids had gone every time. Best investment ever! 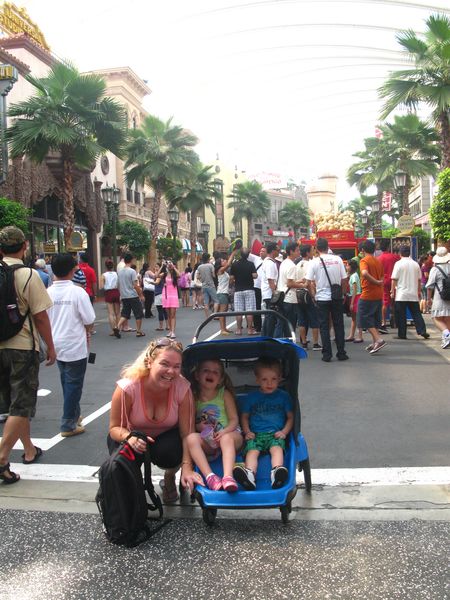 Our first ride was in the Madagascar Land. What I thought my kids would love turned into an absolute nightmare for them. Caius would not let go of me and Mia could not stop crying. She hates the dark, so when we are on a fun boat seeing the Madagascar crew before it enters a dark tunnel with angry lions, etc. it was not fun. But the ride itself is magnificent, huge screens playing images as well as characters popping up, all the time on a moving raft. If your kids are not as sensitive as mine or maybe over 4/5 they would love it. It’s not fast paced and is very movieish.

This was followed by the Madagascar Crew doing a little show and hugs and photos with them afterwards. My kids loved this and as little one’s do I could see their little faces just believing these were the real deal. Caius could not stop waving as we said goodbye to those fluffy little penguins. The spot is not shaded and it is very hot standing there watching the show, thank goodness it is very short and we managed to be at the front of the line for cuddles and photos. 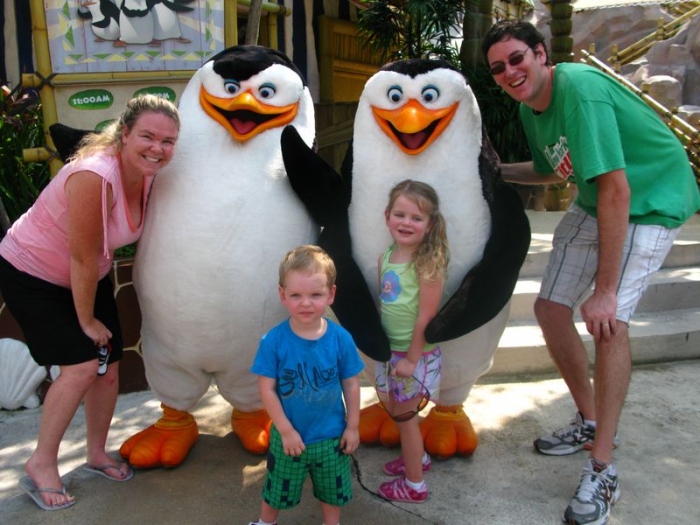 From there we went to Far Far Away, or better known as everything Shrek. Again many tears from my daughter during the 4D movie and standing in the dark dungeon. The movie is in 3D and the seats move and water sprays out, it’s really awesome. But the scary dragon had my daughter in my lap with my hands over her ears so she couldn’t see or hear. My 2 year old watched the whole thing with no qualms.

On exiting the movie there is a Ferris Wheel, which both kids loved. It’s aimed for small kids and I rode along with them, very tame, very nice.

Within Far Far Away there is also a rollercoaster ride which I went on by myself considering the kids were too small and Josh is not a fan. The posters are amusing to read while waiting and it’s a fairly tame ride, good for kids.

Also there is a Donkey Live show, which we never got around to watching this time, but seeing it previously is definitely worth doing. Funny show.

Next is the Lost World or Jurassic Park. One of my favourite parts of the whole park. Josh grabbed a Churro & a drink and sat down with the kids, while I jumped on the Jurassic Park Rapids Adventure, one of my favourtie rides. A nice little boat ride until the dinosaurs get out and you are lifted 3 stories into the air and then dropped down a steep waterfall, fun for everyone.

Even better the look on people’s faces at the 45 minute wait sign and then my bypassing that and heading straight to the front.

When I got off soaking I then took Mia on the Dino-Saurin ride which just goes round and round and up and down if you want it to. She loved it. By this time Caius was asleep.

We then made our way to the WaterWorld Show, which is really cool. You have a choice of stadium seating in the soak zone, splash zone or I’m-a-baby-and-don’t-want-to-be-wet zone (my interpretation). I’m guessing Mia was just so tired by now, because she again was crying through the show. There are loud bangs and pyrotechnics and she spent the show in my lap with my hands over her ears and her head in my chest. I think she almost fell asleep. Caius got a bit scared by the noises and raced to see Daddy a few times, but not too bad.

There are lots of stunts, lots of people getting wet, planes and jet skis and this is defiantly worth a watch if you can make it to 1 of 2 shows.

In the Lost World you can also do Rock Climbing and go on a ride called the Canopy Flyer. The Canopy Flyer wasn’t on my express pass and the wait was 60 minutes. Not my cup of tea until I discovered the single rider line. Single riders are used to fill in gaps and they get to take the exact same express pass road right to the front. Goodbye queue, oh hello here is a group of 3, miss, you can get straight on. Woohoo. 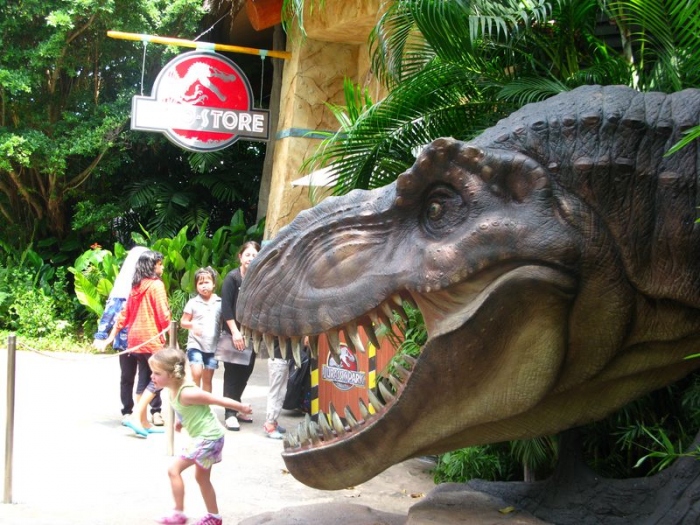 Otherwise known as The Mummy movie. Again one of my most favourite ride’s Revenge of the Mummy. Not for kids this ride is a scary roller coaster ride in complete darkness. So much fun! I love this kinda stuff and I love having a husband who is happy to sit them out watching the kids.

There is a Jeep ride for kids in this part as well, which we skipped because the Sesame Street Show was starting….

We bypassed Sci-Fi world to hit New York, which are shops and restaurants and a main street. We arrived just in time for the Sesame Street Show, which had both kids laughing, clapping and jumping out of their seats to run for cuddles from Elmo & Cookie Monster.

Meanwhile Josh visited Lou’s Pizza Parlor and came back with 3 giant slices of pizza for everyone. YUM!

The Lights, Camera, Action show here is also worth watching. 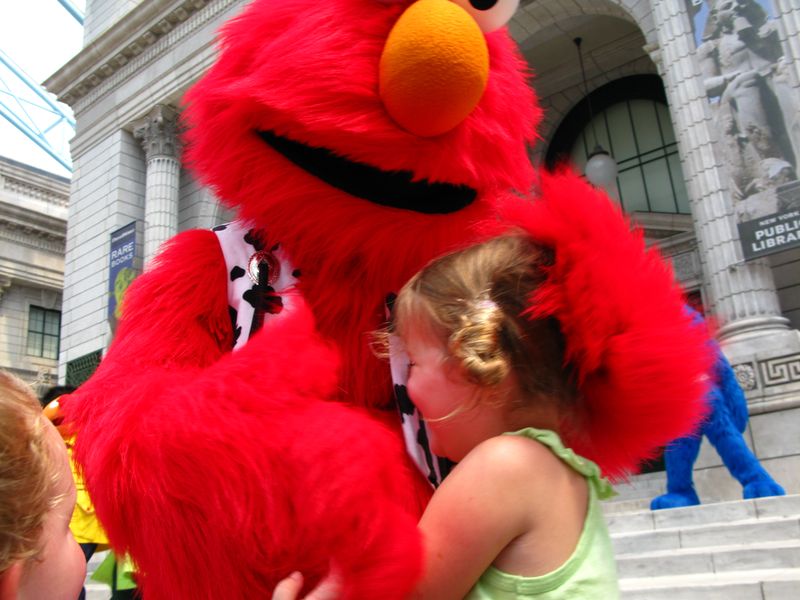 Universal Studios by myself

By this time both kids were extremely tired and cranky. So we made our way back to the hotel to put them both down for a nap. And then as I mentioned earlier my husband gave me permission to take his Express Pass and go back to Universal Studios and do all his rides. I left him napping on the bed and raced back to Universal Studios, giddy as a school girl.

How I love scary rides! I did Revenge of the Mummy & Jurassic Park Rapids again, jumping to the head of the queue with Josh’s pass. I then headed to Sci-Fi world and headed to the worlds tallest dueling roller coasters, Battlestar Galatica. I did the blue one- Cylon, where your feet are dangling in the air and you flip and trip and speed through mist around the other one, Human. I did the red one Human, where your feet a planted and is pretty tame… Then I did the blue one again, so cool!

Also here is the brand new Transformers 3D ride. I felt like I was in the movie. Again this has a Single Line queue, which is similar to the Express Pass. You sit in a ride that moves and shakes and spins to different screens playing a movie. I felt like I was being thrown off buildings, being sucked into hurricane robots and being saved by Optimus Prime. I sat there just thinking, even muttering outloud, “this is so freakin cool, I’m in the movie.”

Oh, previously while we were running past this section Josh also got to have a photo with Optimus Prime, a dream come true for any man lol.

Finally after another 2 hours in Universal Studios by myself I headed home at 6pm to see my lovely family. Caius was still asleep so Mia and I walked down to the Malaysian Hawker Food Court and picked up some yummy cheap Malaysian Food. We took it back to the room, where Caius was still asleep. He slept through till morning and soon Mia was back in bed and Josh and I were relaxing watching a movie.

Great day! Highly recommend. I have also been to Universal Studios LA and this is completely different, more of just a movie theme park and rightfully exciting in its own right, but not to be compared.