There are some real great places to eat in Bangkok. There is anything from the delectable street food on every corner to clean, air-conditioned restaurants in malls to Guinness Book Record Holder restaurants with seats for over 5000 people and 1500 staff.

The Royal Dragon is located on the 1st kilometer of the Bang Na-Traf Highway. It was recorded in 1992 as the world’s largest restaurant. This is not just a restaurant, they also have a unique style of service from ziplines to roller-skates to walking-on-water. There are two performances every night, 6:30 & 8pm, of cultural shows, music, dance and Thai boxing. 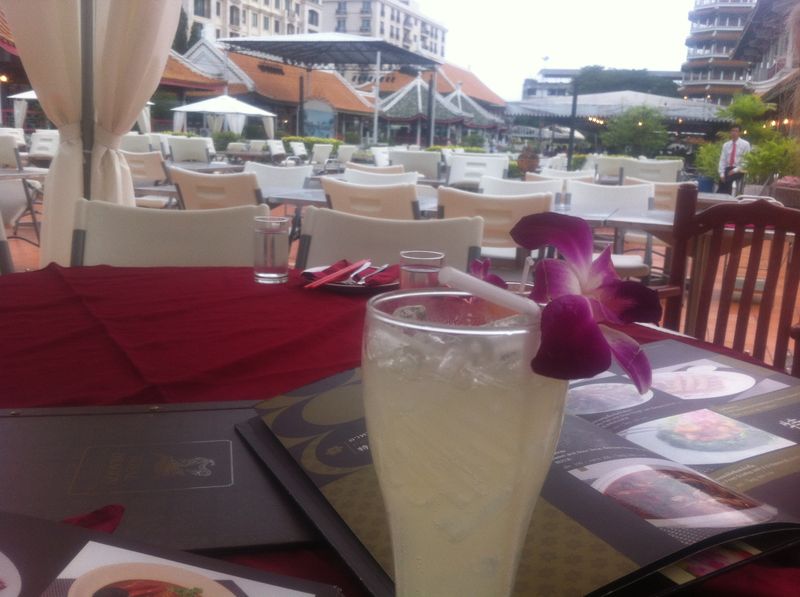 Our meal was exceptional Chinese quality and the kids loved watching the waiters on their skates. But when the show started, they quickly dismissed their seats to run to the edge of the water to watch the floating stage performance. A great evening out.

Other amazing places we have eaten would be the 5th Floor International Food Court at MBK. When you enter you are given a card to purchase food on. Then the choices are plentiful – Greek, Lebanese, Italian, Japanese, Thai, American, Mexican, and so on.

I had a delicious Greek salad and chicken kebab, while Josh went Lebanese and the kids had fish and chips. Afterwards you take the card to the cashiers and they ring up the bill. It’s nowhere near as cheap as the 6th floor hawker type food, but it was certainly a tantalizing dream for our tastebuds.

While at MBK we did a quick shop at the supermarket and found ourselves some French Salad chips. I had to buy them, because they must be healthy right? Did I also mention the supermarket staff were on skates too, busy boys. We also went on a search for some Vegemite as I was having withdrawal symptoms. Marmite everywhere, how disgusting, until finally we found it!

A discussion on our Facebook page about who loved it and who hated it, had someone asking for advice on what to actually do with it? So we made a quick video on how to spread vegemite on your toast. Vital tip: It’s not Nutella, spread it thinly! And may you eat in ecstasy. How do you eat your vegemite? Comment below!

While out and about, Josh and I also tried different types of street food. Josh was a fan of meat on a stick and you’d often spot him gobbling down some warm roasted pork. I love fried banana and, of course the kids are always a fan of spring rolls. 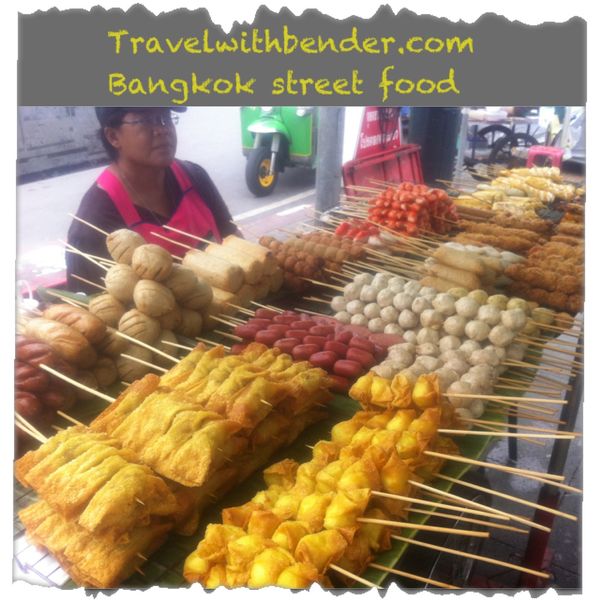 One of our last afternoons, once all our work was completed, and we had a few hours till we had to pick up the kids, Josh and I made our way to Khao San Road - the “backpackers district”. This is a short street not too far a walk from the Grand Palace.  This road is one of Bangkok’s most famous streets, now a melting pot of many cultures, yes even McDonalds, KFC, Subway and Burger King have found their way there.

Our first stop was Pad Thai 50B ($1.50) with egg and chicken. We went with one so we could try the other delicacies. It was a big plate and absolutely delicious. After my first try in a food court where the spice near burned my tongue off I was in love. This was simple and plain and you could season as you see fit. Add to that a few Spring Rolls, 10B each ($0.30), and we had finally found the real Thailand.  It took 3 weeks, but I finally had found Bangkok.But you won’t find a lot of Westerners in those stores, despite their location, because the street is filled with cheap and divine street food.  This is also the budget travelers dream with sunglasses, clothes, bags and hats all on a bargain rack. I suppose if you are dodgy enough you could help yourself to a counterfeit PhD, drivers license, birth certificate or student card. When I tried snapping a photo of this practice the man was not impressed with me and shooed me away. 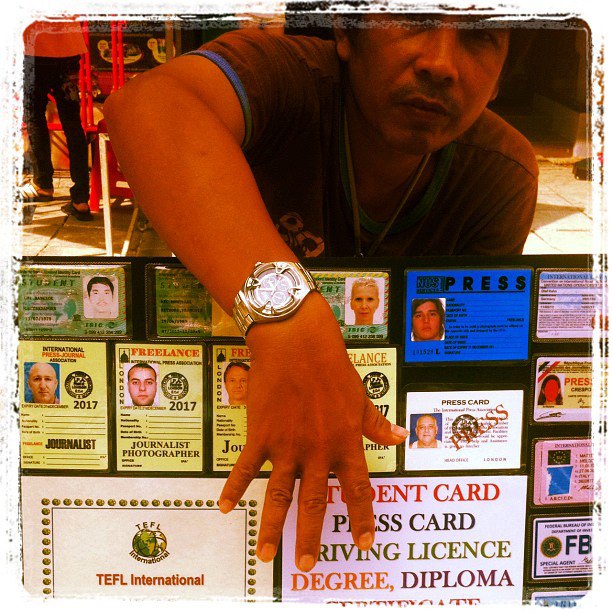 A little while later we found a lady selling Roti pancakes, 50B ($1.50). I had been searching for this one and was ready. My first Nutella and banana, my second banana and chocolate. I could not get enough. It is crispy, warm, sweet and delicious. I could live on it! My second last day in Bangkok and I find this. You can guess what I found on my last night in Bangkok – Pad Thai and Banana Roti!

After our indulging lunch on Khoa San Road we walked past the Grand Palace to the river. Once we found the port a lady was quick to sell us a private boat. The taxi ride had been long and ludicrous in the afternoon traffic, taking over 1.5 hours. We had to pick up the kids fairly soon and she promised us if we got our own boat it would come now and we would be to the last stop within ½ an hour.

We paid our 800B ($25) and within seconds she had a long boat there ready to take us where we willed. A long beautiful wooden boat, I felt like we were on our own private gondola ride down the river. But the main difference was this boat was fast and there was no Italian love music playing in the background. The river was brown and really dirty. But the view was still amazing. We passed Wat Pho, Wat Arun and several other distinguishable buildings and interesting architecture. 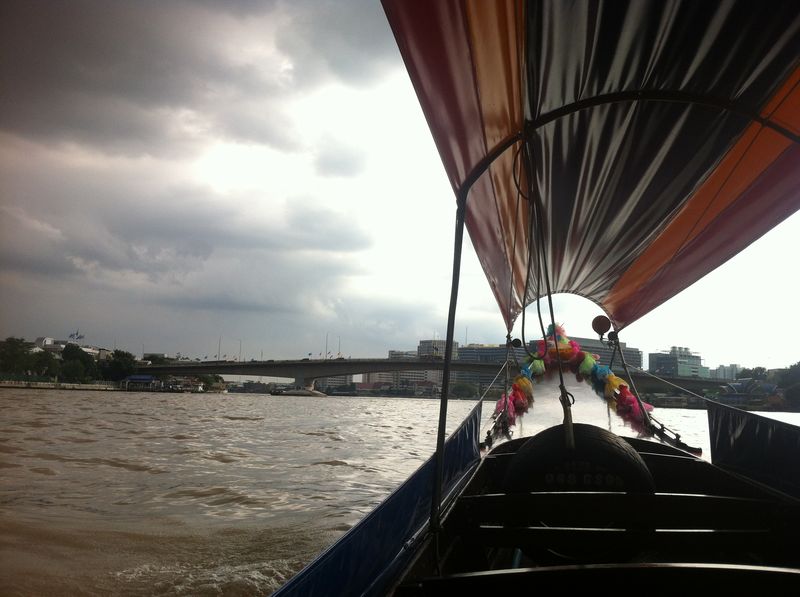 The boat ride was less than 15 minutes. 15 minutes compared to the 1.5 hour taxi ride – wow! A Tuk Tuk was right outside and we convinced him to take us to our kids for 100B. Within seconds it started to pour. The plastic came down on the Tuk Tuk and the streets became flooded. It’s amazing how quickly the streets flood over here with such a quick and sudden down pour.

We reached the kids school fairly quickly and their faces beamed to see the Tuk Tuk would be taking us home. We were quite wet when we arrived home, but pretty happy with our ride as he brought us down Soi 41, which we had not been down before. We jumped across the road to our favourite restaurant, Korean BBQ, and thus ended our food journey in Bangkok, oh except the Durain cake I was tricked into eating. See my 7 hour hairdressing drama!

View all our drool-worthy photos in our Bangkok Food Journal!
We also did a cooking class in Bangkok, so yummy!

"I respond to every comment by private email. So please leave me comments, I love chatting to you" - Josh Bender
Posted by Karin holmes on Sep 23rd, 2012
Interesting read xx
Posted by Mike @ IowaVoice.com on Nov 23rd, 2015
I thought the food was wonderful. Meat on a stick was definitely a favorite of mine, as well. Did you try the bugs? :)