“Where you going? You know it’s a Public Holiday. The shop is closed. Perhaps you’d like to go this store instead.”

If we hadn’t read about the well-known Gem Scam we would have totally fallen for the smiling, seemingly genuine Thai man.

Bangkok is well known for its temples. When you get to the Grand Palace there is a voice-over telling you that the Palace is open every day and to dismiss anybody who tells you it is not. We didn’t face anyone telling us otherwise on our arrival at Grand Palace and found the announcement amusing. 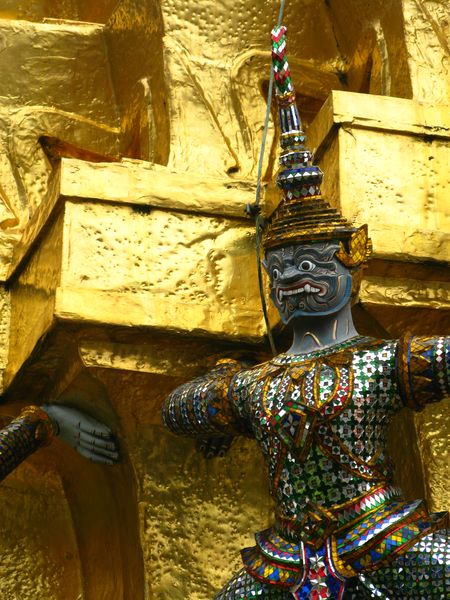 Once inside the place is busy, but beautiful. One building holds the Giant Reclining Buddha. It really is giant. As you walk into the building you hear this ping ping ping and wonder if there is some kind of work going on somewhere. On rounding the bottom of the statue and starting up the other side there is numerous people purchasing coins and dropping them one by one into small containers, filling the chamber with a beautiful tinkle.

There is plenty to see here from the miniature Angkor Wat to weapons and lots of gold. The kids did not find it at all interesting and we barely managed to get out of there before a melt down. We went in the morning and by noon it was well on its way to being a piping hot day.

The next temple we visited was Wat Pho. Josh and I decided after the episode at the Grand Palace that the kids would not be interested in this one either and after dropping the kids at school made our way to Wat Pho. 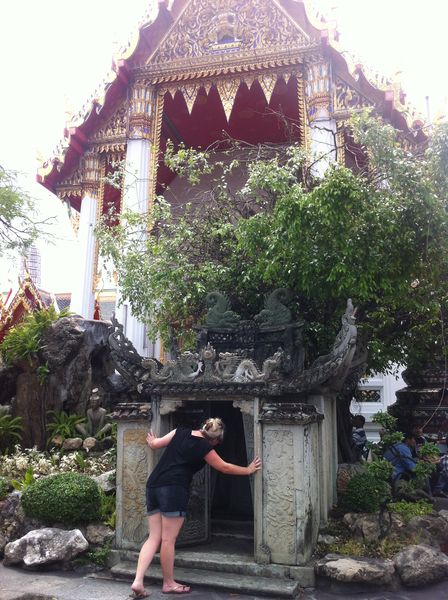 Wat Pho is a Buddhist temple in Phra Nakhon district, Bangkok, Thailand. It is located directly adjacent to the Grand Palace. Known also as the Temple of the Reclining Buddha, its official name is Wat Phra Chettuphon Wimon Mangkhlaram Ratchaworamahawihan. Other then all the beautiful historic architecture and cats, the University of Massage is located in there & it is considered the birthing place of Thai Massage. Josh and I stopped to have a foot massage at the University. It was pretty good, the girl performing my massage told me she had not even studied there, so I am not sure it is worth going just for the massage, you could get similar on the street outside and cheaper. Temple entry & 2 foot massages was $24.

On our way out of Wat Pho we were stopped by two gentleman who informed us that our ticket included the laughing Buddha or the small Buddha or some other Buddha. As they started talking, I realized they were doing exactly what I had read the gem scammers do. They asked for our map, to show its location (gain your trust, reveal it's not so far) and pointed out that they could get us a good deal on a Tuk Tuk. So subtle, we said no thank you and went on our way. Later walking past the same way we managed to save some UK tourists from the same scammers, map out, ready to go.

You can learn more about this scam here, but the general gist is they offer to take you to a better palace, temple, Buddha, shop. They show you where it is on the map and get a Tuk Tuk for you. On the way they mention a great gem store you should visit. When there they hard sell you cheap gems in bulk to take back to your home country to sell. Often the gems are just glass and not worth anything at all.

Our first encounter with these men was the day we decided to go to the movies. We got to Siam Paragon (the other side) about 11am and were approached by a lovely Thai man. He asked where we were from and told a story about his son studying in Australia. He then told us he was a teacher and that it was a public holiday today and that the shops were closed. He mentioned he knew of one shop that was open if we wanted him to show us. At this time we were believing every line, but as I glanced across the road I could quite clearly see people coming in  and out of the mall. Considering we really only wanted to see a movie I declined his offer and we headed across the bridge.

As we were walking through the busy mall seeing school kids running by on excursions and everything absolutely open we were still pondering how such a nice guy could be a scammer. We laughed at the situation pleased we had resisted the scam. These are nice guys, don’t be fooled. And whenever possible try to warn others!

After Wat Pho we made our way to the river and a small restaurant to the left called Stiltz to admire Wat Arun. Wat Arun is much more beautiful from a distance than up close and so we decided to actually just sit and admire it. The food was average, but very cheap and we enjoyed sitting on the brown river admiring the comings and goings of people on the boat and the lovely Wat Arun. 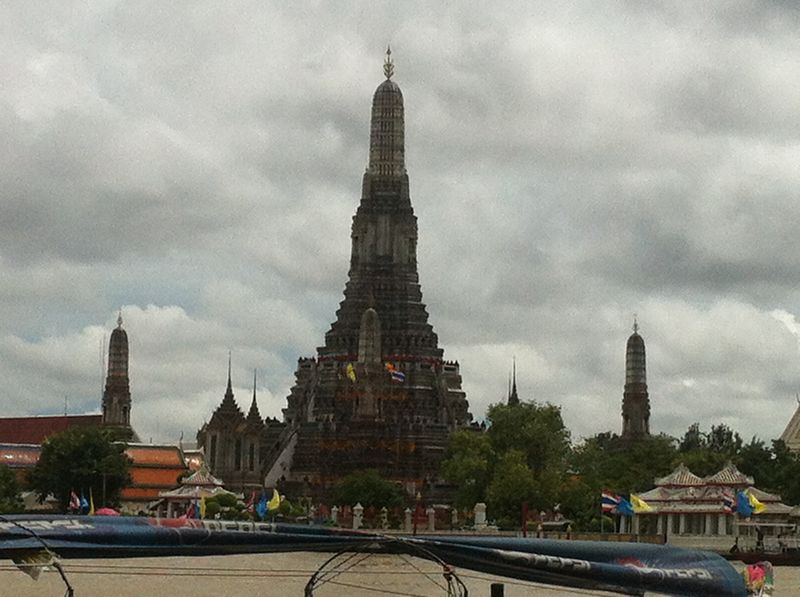 We wandered back towards the street munching on freshly fried bananas and basking in the hot summers day, pleased to have all 3 temples now under our belt.

Want to see more of our photos on the Grand Palace & Wat Pho - check our photo journal!

"I respond to every comment by private email. So please leave me comments, I love chatting to you" - Josh Bender
Posted by Graham Franklin on Feb 4th, 2015
Sad to hear of the scammers that approached you, but Wat Pho and Wat Arun are stunning temples in Bangkok. I know a little of bit Thai, this is what I say "falang nit noi dang kab", which means "white foreigner has no money", seems to works!