Our day started again at 10am with Ismail of Travel Atelier picking us up from our hotel. The Goreme Open Air Museum was located less than 10 minutes away. It is regarded as one of the most popular attractions in the region and is a UNESCO World Heritage Listed site. The complex contains numerous rock-hewn churches and houses as well as incredibly intricate frescoes (wall paintings). Most of the structures date between the 10th and 12th centuries, but Christians lived in the area from as early as the 2nd and 3rd centuries.

We decided to start with the museum first in the morning as the kids would have the most energy and there was quite a bit of walking to do (for little legs). Each cavern contains a host of interesting stories behind them, the people that lived there and the events that took place. Whilst there was some signage, having an experienced guide made the walk much more enjoyable. 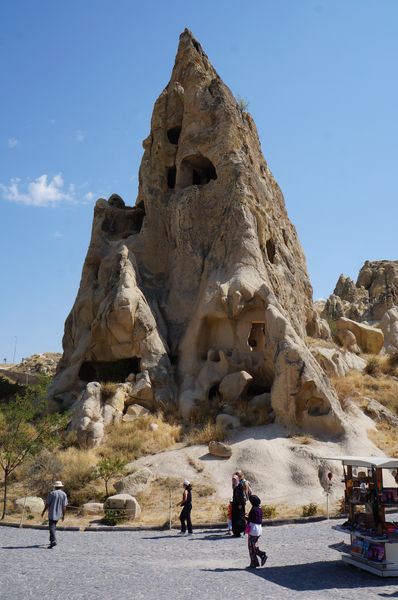 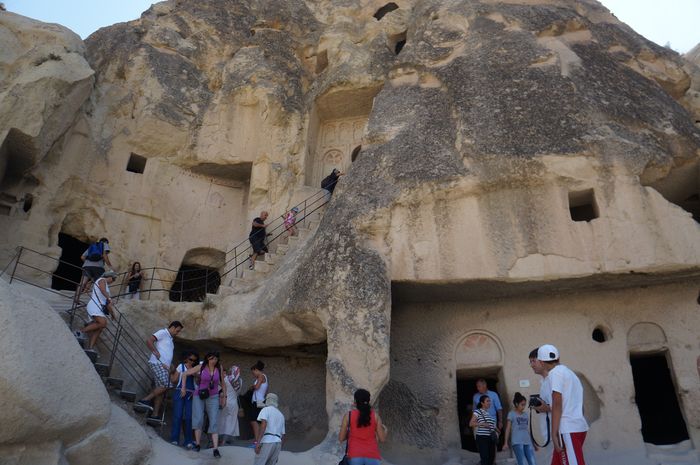 On the walls and roofs of the churches were intricate, vibrant paintings (frescoes) that depict stories from the bible as well as saints. However, photography wasn’t allowed inside most of the churches to protect the delicate paintings. 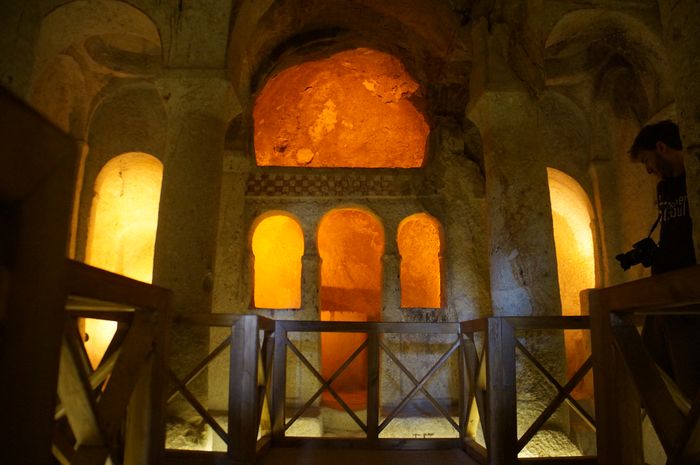 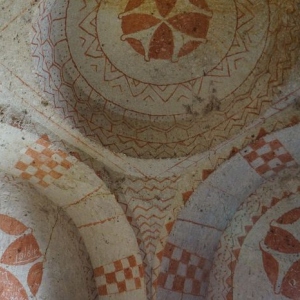 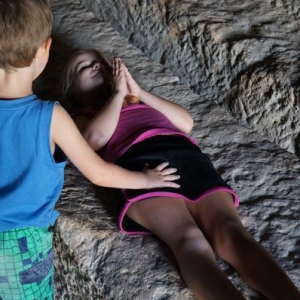 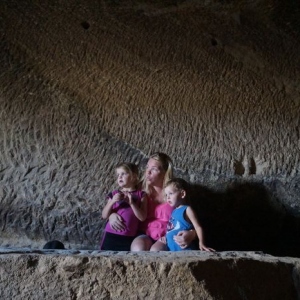 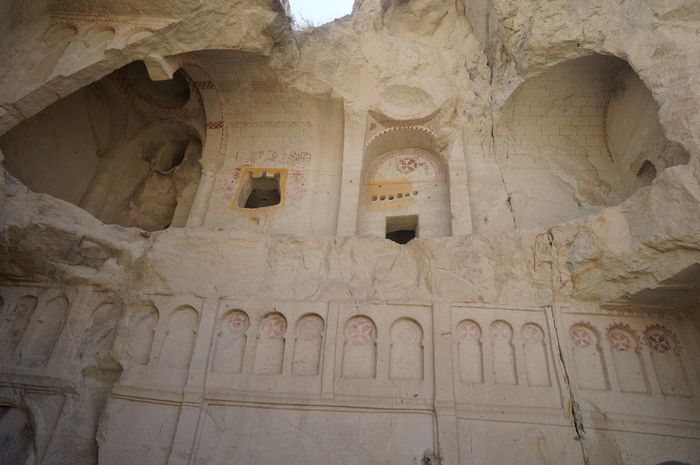 Our guide, Ismail, shared some interesting background stories like the invading Muslim armies scratched out the eyes from most of the figures in the paintings because they believed it would take away their power. 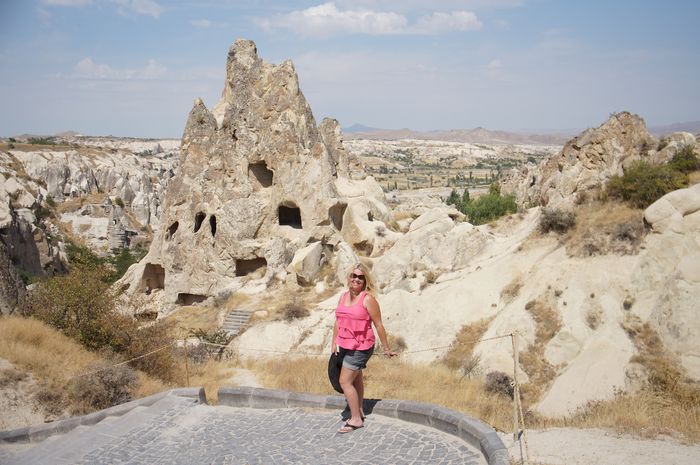 Ice-cream and a Show

As we were leaving the Open Air Museum, we came across a famous Turkish ice-cream vendor. These are more than simple ice-cream carts, they are an experience. The vendors use long, large scoops to pick up the ice cream and proceed to flip and stretch it, pretending to place it in a cone then handing an empty cone to one of the kids. It was very amusing although Mia got a bit frustrated why it took so long to get her ice-cream. But it was all fun and the ice-cream was quite tasty too. Different from other countries in the fact that it’s more gelatinous in texture and less creamy so it lasts longer in the hot Turkish weather, with fewer drips. There are often ice-cream stands like this in popular tourist locations, so when you’re in Turkey keep an eye out for one. 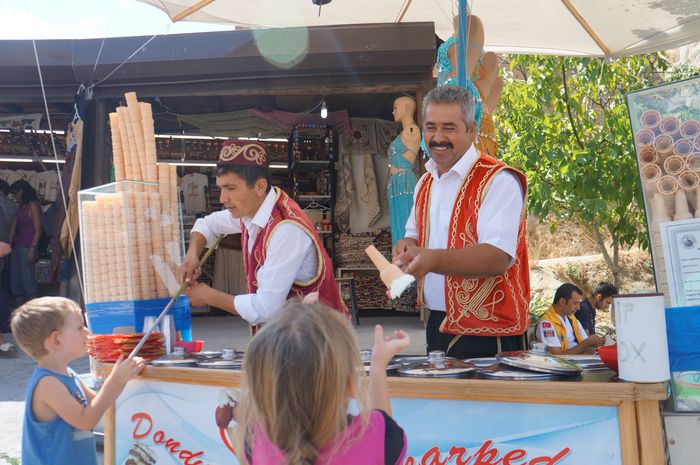 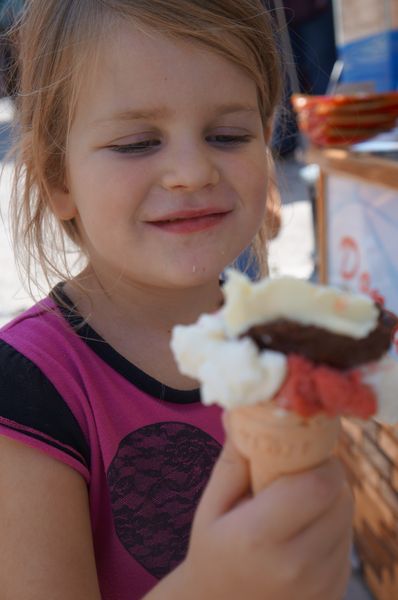 As we were near the iconic Love Valley, we stopped there for a few panoramic photos. 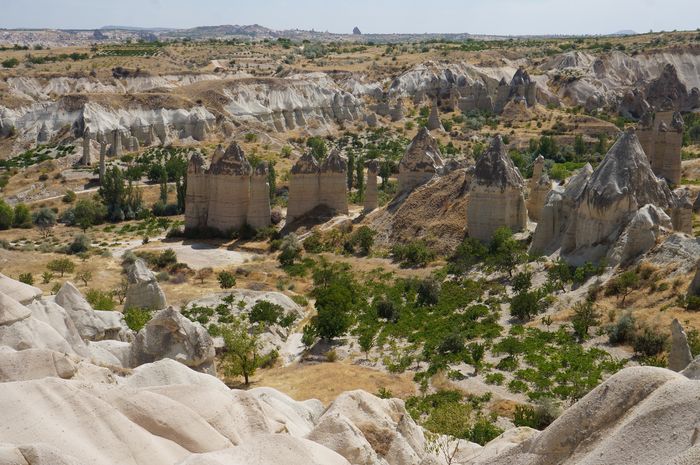 By this point, we had hungry tummies, so Ismail took us to a local popular restaurant Aravan Evi. The food here was excellent and the set menu included: tandoori soup, stuffed pumpkin flowers, stuffed grape leaves, salad, cheese pastry, bulger, beans, and beef. The restaurant was a family business and provided really friendly service. We sat around a traditional lowered table on cushions, which was prefect for Caius to recline and have a well-earned rest. 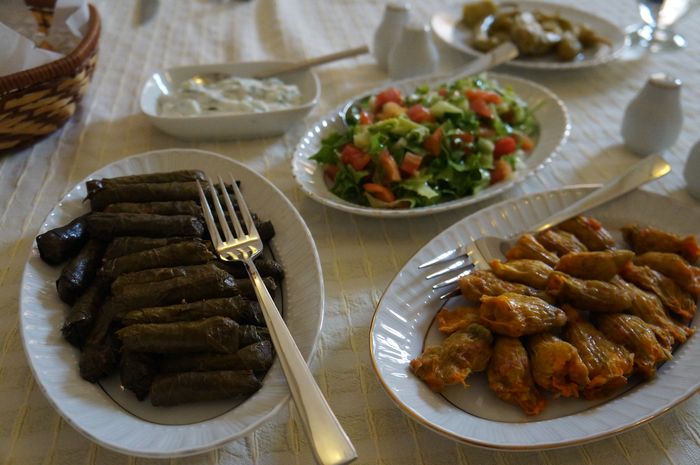 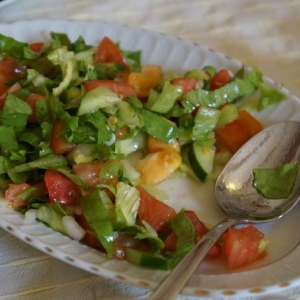 The restaurant is attached to a bed and breakfast owned by the same family. So if you’re visiting the region and looking for an authentic Turkish experience, then this is a good way to go. 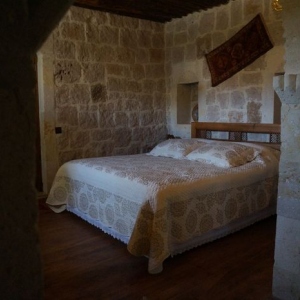 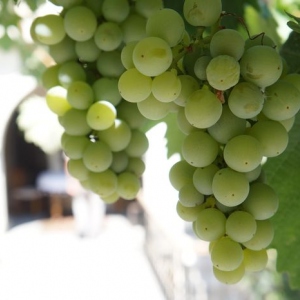 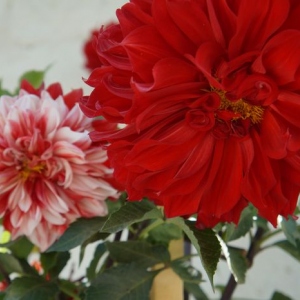 We piled back into the minivan and headed to our next destination, the Greek Village. This is so called due to the fact that many Greeks lived here prior to the formation of the Turkish republic in the early 20th century. When the Ottoman Empire was dismantled hundreds of thousands of Turks were migrated from Greece to Turkey and vice versa. We only stayed a short while in this town and I picked up some credit for my Turkish SIM card while Erin and the kids tried free samples of Turkish delight and dried fruits at a nearby shop. 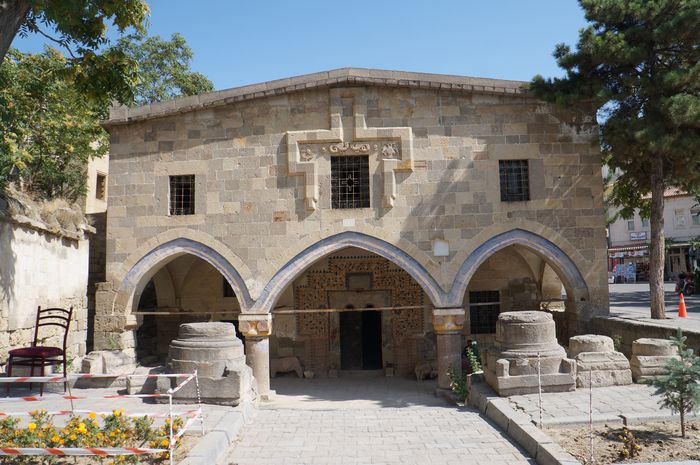 Now I Get Why Rugs Cost So Much

Located near the centre of the village was a well-known rug factory and shop. We were provided a tour of the facilities and were shown how the entire rug production process worked – from collecting and dyeing the wool and silk, through to patterns and working the looms. The shop worked with a collective of thousands of local folks who make rugs in their own homes, and sell through this shop all over the world on a commission basis. Some of the rugs take as long as 18 months to create and were meticulously hand-crafted using a “double knot” method which makes a more durable and better quality rug. We learned a lot about the process of making rugs and will certainly never look at rugs the same. The Turkish government provides incentives to keep this ancient craft alive and subsidize the cost of insurance and shipping all over the world, so you can get one of these rugs delivered to your door free of charge. The cost of the rugs varied from $50 to $150,000, with most of the large dining or living room sized ones around the $2,000 to $8,000. Usually these kinds of hand-made rugs would last over 100 years. We were very tempted to purchase one, but simply didn’t have anywhere to put it as we continued our nomadic travel around the world. 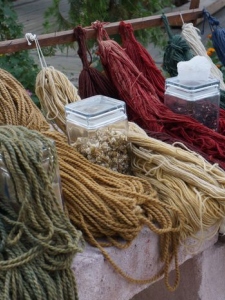 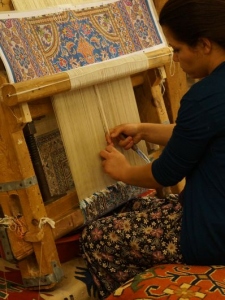 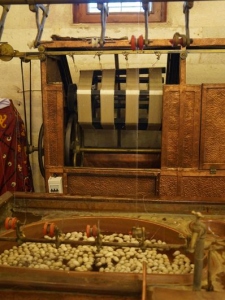 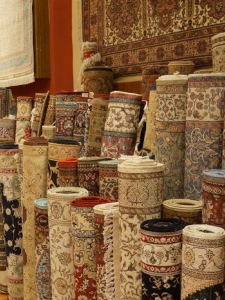 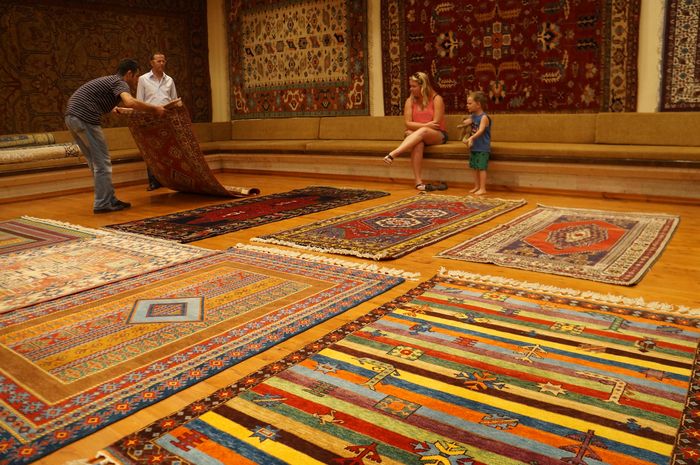 Our final stop on the tour was the Uchisar panorama lookout. The sun was starting to get low and cast a beautiful warm glow over the valley. One of the stalls here was selling a natural Viagra, very amusing. And a flock of pigeons had made themselves at home near a tree decorated with ceramic decals of a blue eye – a common symbol in the Middle East designed to bring good luck and protection from “the evil eye”. 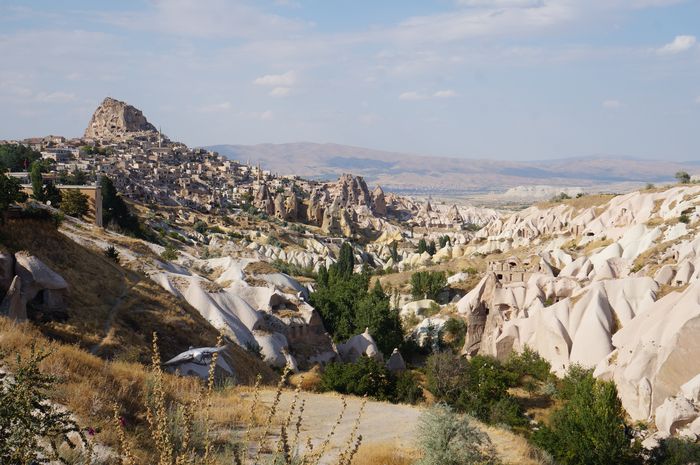 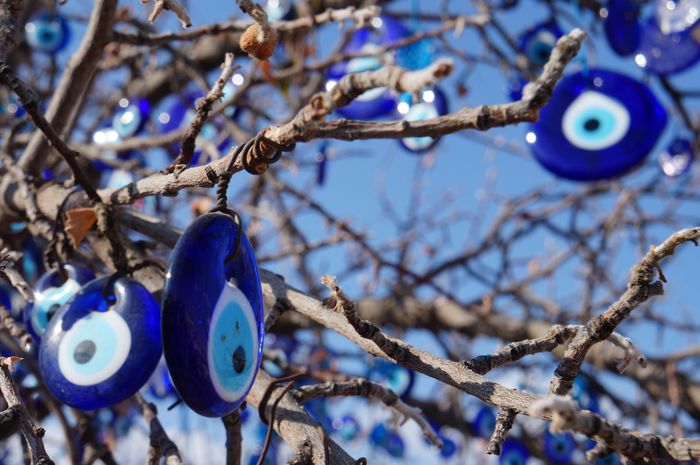 Ismail had been a wonderful guide and friend to us and was very kind to give Mia and Caius gifts that would remind them of their time in Cappadocia – soft plush hot air balloons. The kids were very excited with their new toys. 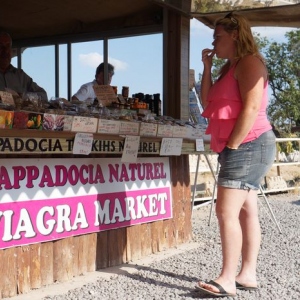 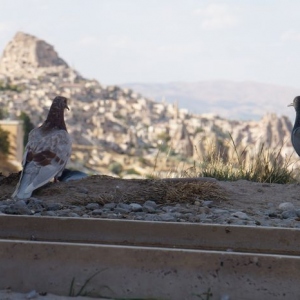 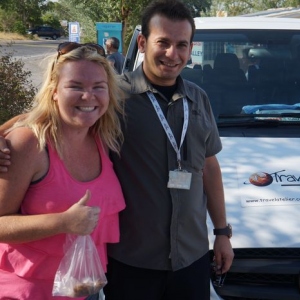 Our day was finished and we were driven just down the road to our next hotel stop, Taskonaklar. Ismail was super friendly and professional throughout our tour. There were still lots of things to do in the area that we couldn’t fit in, but for our timeframe and with young kids, I was really happy with what we were able to fit in just 2 days. Our stay in Cappadocia was a truly memorable event for our family with hot air balloons and fairy chimneys. I hope our journey has helped inspire you when you visit Turkey.

"I respond to every comment by private email. So please leave me comments, I love chatting to you" - Josh Bender
Posted by Kerri Frazier on Oct 4th, 2013
Wow! I am getting so excited to go to Cappadocia. Thanks for sharing. I love the photos
Posted by Osiris Tours on Apr 16th, 2016
Cappadocia is amazing place. The life style was established by Basil of Caesarea who encouraged Christian monk to gather in the monasteries and pray together.