It started like any travel day. The cab was on time at our house at 5am for our transport to Stansted airport in London. It was dark and cold. We coasted through the city and down the M11 motorway. With 2 miles to go it looked like we would even be early for our check-in.

Then the traffic stopped.

I’m not talking about a traffic jam crawling pace. I am talking completely stopped. Our driver followed a Stansted bus into the emergency lane, until that came to a standstill as well. At that point he moved back into the traffic to free the lane up, and not a moment too soon as police cars roared past in full flight, followed by flashing ambulances. Something was going down.

After 90 minutes sitting in the car with my hungry and tired children and not moving one inch, I decided to take a walk and see what the hold up was. It was 7:30am. Our flight was due to leave at 7:55am. Things weren’t looking good. Some research on my dying phone reported that a semi-trailer had dislodged a load of steel cables and caused some serious damage to cars and the road itself. The roads were not expected to clear until 10am. Strewth! 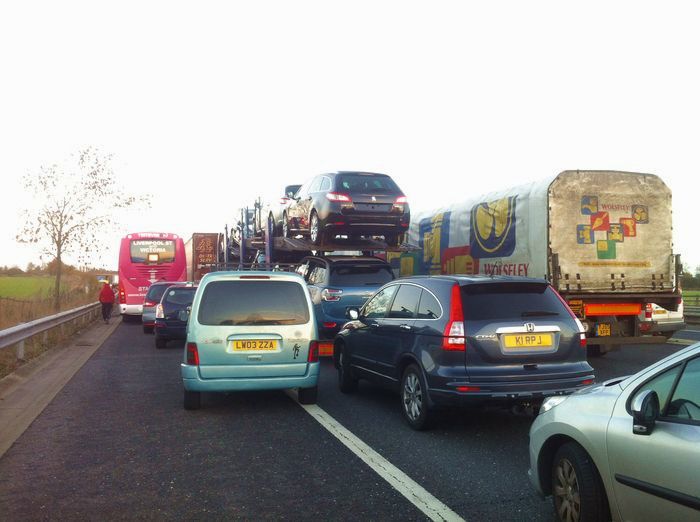 It wasn’t a long walk, but it was an eerie one. I felt like I was in a scene of The Walking Dead or some apocalyptic movie: 4 lanes of traffic all at a complete standstill on their way out of London. Cars loaded with bags of the people heading to the airport. A number of passengers even started getting out of cabs and desperately walking down the motorway, with anxiety in their eyes, desperate to avoid missing a scheduled flight. The crunching of their luggage wheels on the gravel road pierced the still, crisp morning air. I walked between cars, no longer even in lanes, until I came to the scene.

Flashing lights, a severely smashed car, luggage strewn across the highway and deep gouges in the road from the steel cables strewn like dropped drinking straws. A yellow-vested policeman was talking to two men and I stepped up to listen, asking questions as well. No fatalities, a few people hurt. The semi had gone up the embankment once a car braked suddenly in front of him and then lost it’s load. Cables crashing down onto the cars behind it. It was amazing no one was killed. 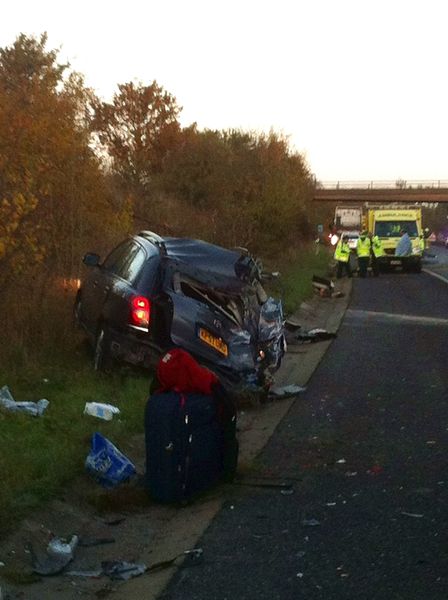 The police expressed immense frustration at the motorists standing in the emergency lane. Even the pink airport bus was there and many police were forced to walk to the scene as they could not get close enough because of the traffic jam and crammed emergency lanes.  That only slowed their progress. 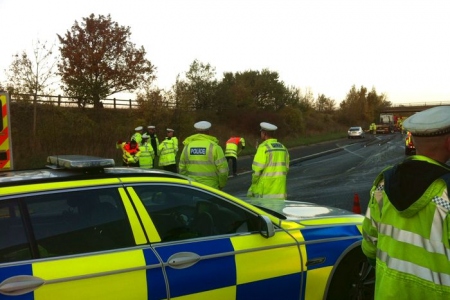 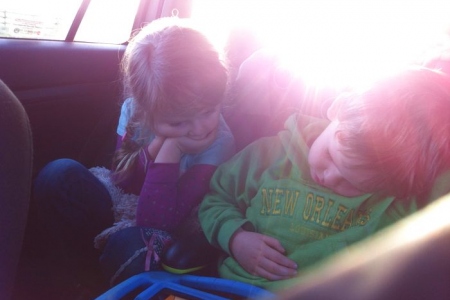 I walked back to our cab. The air was frigid and puffs of steam escaped my mouth as I breathed. The November sunrise was starting to brighten the dark motorway. 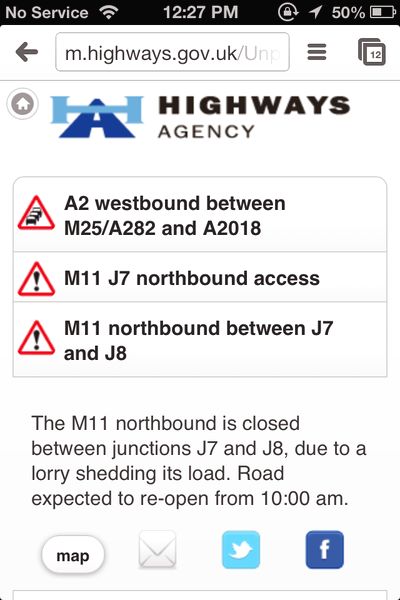 It was not much longer before traffic started flowing through the one lane police could open. We reached Stansted airport about 8:45am, nearly an hour after our flight and 3 hours after our expected arrival.

With no breakfast and a 5am start you can imagine how grumpy the kids were. The easyJet queue was becoming quite lengthy so we divided. Josh lined up for easyJet while I joined the germanwings queue. 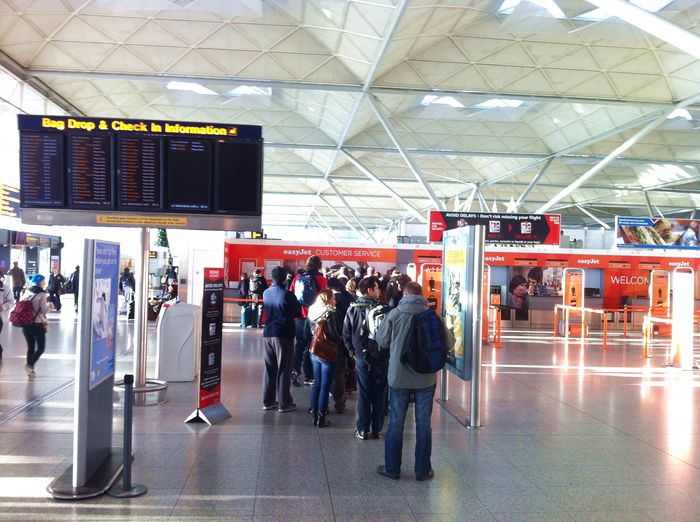 The lady representing germanwings was treating all passengers before us very rudely and I dreaded my turn. When I approached her I kindly remarked, “I bet you’ve had a frustrating day dealing with this.” She glared at me and snapped back, “I have had a fine day, but now I am getting annoyed.” Wow, great way to welcome a customer!

I explained what happened and in a rehearsed, unsympathetic way, like she had said it 50 times that morning, she told me there was nothing she could do about it that I would have to forfeit my £396.96 flight and purchase another flight. She had nothing available until Monday at triple the price. She then suggested I go to easyJet across the isle and book with them, it would be cheaper.

I asked her if the company offered any type of compensation and she told me that she works for 6 companies, not just for germanwings and is very sure there is nothing she can do. I asked her for confirmation that I did not catch my flight so I could try and gain compensation from our travel insurance and she told me she definitely could not do that, as she doesn’t work for germanwings. I would need to call the company and ask them to print it and send it to me.

As you can imagine we did as she suggested and booked flights with easyJet that Josh had just managed to get to the front of the que. The new flights cost £576.26. They only had 2 available seats on today’s flight, so we had to book the flight for the next day.

We headed to Burger King to feed our starving children and used the free 1-hour wifi (an airport with paid wifi – craziness!) to book accommodation at the Raddison Blu for US$181.47. It was a 2-minute walk next door and they were so kind to offer us an early check-in so we could all head to bed. The room was a family suite, which consisted of 2 interconnecting rooms and was rather large. Josh and both kids fell asleep and I sunk into the bed to let my creative juices flow into my writing.

It’s been almost 15 years since my first international flight and this was the first flight I have ever missed. It was unavoidable and disappointing, but I’m a “light at the end of the rainbow” kind of girl and after 2 weeks on the go in London I relished our day in the hotel at Radisson Blu immensely.

A manager at germanwings called later that night offering us a free change to tomorrow’s flight. We let him know it was a little late for that after his representative told us earlier there were no flights until Monday and suggested we book with easyJet.

We heard from germanwings on the 21st November saying they had refunded £137.44 of the £396.96 flight. There was no letter attached, just an invoice. A little confusing at first, but we worked out what it meant. About a month later a representative called us again and we came to an even better outcome. I have to say despite the rude staff at the airport (who was a third party attendant) the management at germanwings were very proactive, and despite the time delay, helpful. I look forward to flying with them again in the near future. And applaud their customer service, so great to see from an airline.

During my time at the airport we used Skype to call Travel Insurance Direct whom we had a policy with. We have used them twice in our travels, once for my stolen iPhone in Guatemala and also for my son’s fractured wrist in Israel. The friendly Aussie was a relief after dealing with 3 hours of traffic and incompetent airline staff. He let us know travel delay by motor vehicle accident was included in our policy and to save all receipts for accommodation, transport and the new flights to make a claim. We got all this information together and within the month they accepted our claim and provided us with a refund.

This is now our 3rd claim with Travel Insurance Direct. Each time they have been on the ball and very efficient. We will continue to use them for travel insurance.

Our flight with easyJet did not go smoothly the next day we had problems at check-in and the airline staff on board were bored, tired and rude. After a complaint to their management we did not see any resolution like we did with germanwings. I am determined never to fly easyJet again. They were by far one of the worst airlines to fly with in terms of customer service and we’ve flown a lot of airlines. Even RyanAir was better by a country mile. It drives me crazy when you have airlines like WestJet giving their customers free Christmas presents and then uncaring plebs at easyJet who can’t even offer a smile.

Anyway we finally made it to Prague, although one day late. It was a shame, because we thoroughly enjoyed Prague and could have really used that extra day. But what an adventure we had and certainly something worth writing about. I can’t say “I’ve never missed a flight” ever again, but at least I have a whale of a story to share instead.

"I respond to every comment by private email. So please leave me comments, I love chatting to you" - Josh Bender
Posted by Dariece @ Goats On The Road on Jan 4th, 2014
Hey Guys! Wow, I can't even imagine how hungry the kids must've been..even I would have! Glad to hear it all worked out in the end :)
All the best to you in 2014.
Posted by Deia @ Nomad Wallet on Jan 4th, 2014
Wow, that lady at the airport wasn't doing a very good job representing the airlines. But it sounds like that travel insurance has paid for itself!
Posted by Tom @ Waegook Tom on Jan 5th, 2014
I think I'd have been majorly freaking out if I were you. I'm a show-up-at-the-airport-freakishly-early kinda guy, and have yet to miss a flight (*touch wood*). That rep at Stansted sounds incredibly rude, and the excuse that she didn't work for GermanWings wouldn't have cut it with me - she was still representing them, and doing so poorly. As for EasyJet, I've had delays almost every single time I've flown with them, and don't expect anything resembling service from their crew. Since they charge for absolutely everything, I'd have no reason to interact with the crew anyway.

Anyway, here's to hoping you don't miss any flights in the future! I wonder how many passengers were actually on that GermanWings flight - it must have been a lot for them to notice and reach out to you!
Posted by Monica | The Travel Hack on Jan 6th, 2014
Oh dear. This is absolutely my worst nightmare, especially when it totally isn't your fault that the flight was missed. What a shame you missed out on an extra day in Prague but it's great to hear you had a good time!
Posted by 4565656 on Jan 17th, 2014
its germanwings, not GermanWings. Btw, these workers dont represent the airline, because they are paid/hired by sub-companies that often belong to the ground staff plc. They just wear the uniforms.
Posted by Erin on Jan 17th, 2014
Hope everyone got my emails. Thanks 4565656 for the spell correction. We understand the airport staff don't work for the airline, as mentioned in the post, but I disagree they certainly do still represent them and airlines need to be aware of this. It's the first face/experience after all.