Every year on the 26th January we have headed to the city of Perth for Australia Day.  It’s the only day of the year people are as patriotic about Australia as the Americans are pretty much every day. Aussies drape flags like superhero capes around their shoulders and flock to the city centres for fireworks, cricket, snags on the barbie and beer. Cars spontaneously sprout flags out the windows, adults forego fashion and paint their face blue, red and white, and everyone is wearing something that resembles a patriotic message in Aussie colours, which is, ironically, manufactured in China.

What is Australia Day?

Australia Day is the official national day of Australia, much like the USA’s 4th of July. It is celebrated annually on 26th January, which marks the anniversary of the 1788 arrival of the First Fleet of British ships into Sydney, New South Wales. Ask the average Aussie and they probably wouldn’t know that. They’d just know it’s a day they don’t have to work and get paid for it. Woohoo! 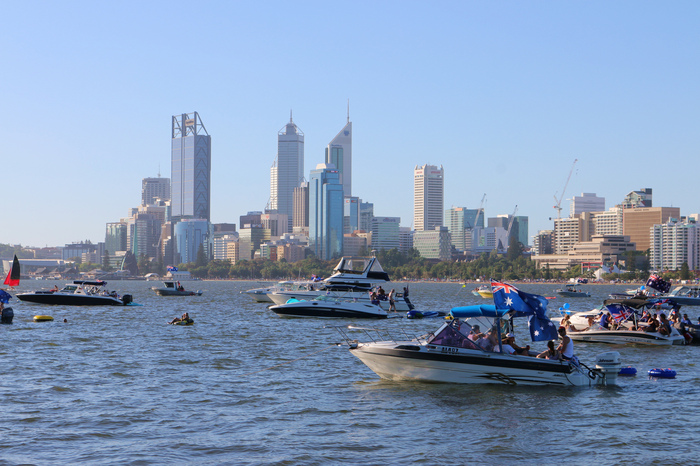 As soon as Christmas is over the shops start filling up with Australia Day gear from large flags to earrings, hats, glasses, ties, dresses, you name it. The budget stores in Perth like Crazy Clarks or Red Dot will have these items at a great deal. If all else fails wear green & gold or blue, red & white. 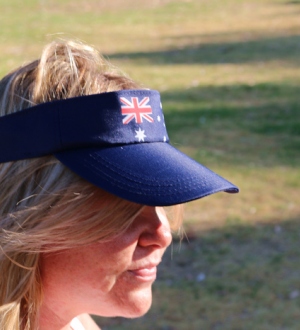 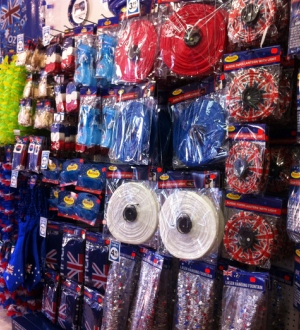 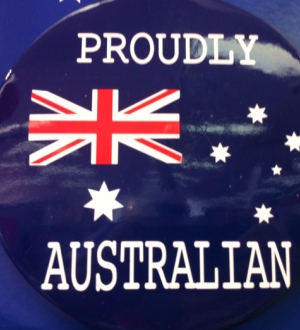 Every year the City of Perth puts on the largest community celebration in Australia. As the sun goes down, along the Swan River fireworks go off synchronised to music simulcast on a radio station. And along the river’s shores you can be part of any number of different activities. This year it happened to be the 30th anniversary of the Perth Skyworks. Special events included a free Entertainment Zone at Langley Park, Air and Water Show and of course the spectacular Skyworks fireworks finale which featured special lasers and water. 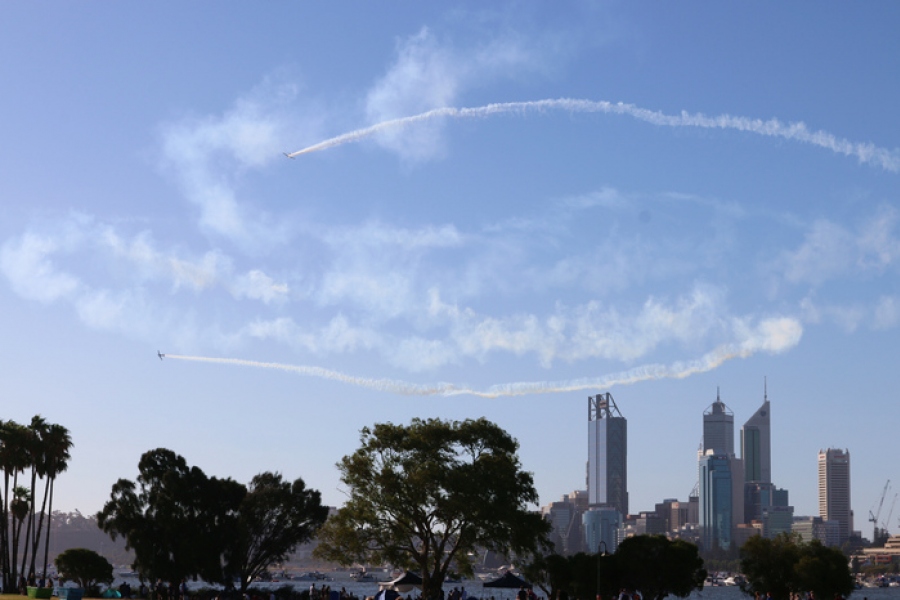 Most of the surrounding roads into the city close early. Kings Park often shuts down by 6am, the Narrows Bridge which is accessible via the Mitchell Freeway closes around midday and the Causeway closes about 7pm.

We have taken trains in previous years, which can be an exciting and atmospheric adventure. Getting in is fairly easy going, but you do face a reasonable walk towards the river. Getting out is a madhouse and can be likened to peak hour on the tube in London, but with a lot more “Aussie Aussie Aussie Oi Oi Oi” shouting.

With two little ones in tow we now prefer to drive in. We like to arrive around 4pm and take the Grahame Farmer Tunnel and turn down the Great Eastern Highway. You can risk street parking or just pay $5 and follow the signs to Rotary Parking.

You can read all about road closures on the Perth Skyworks website. 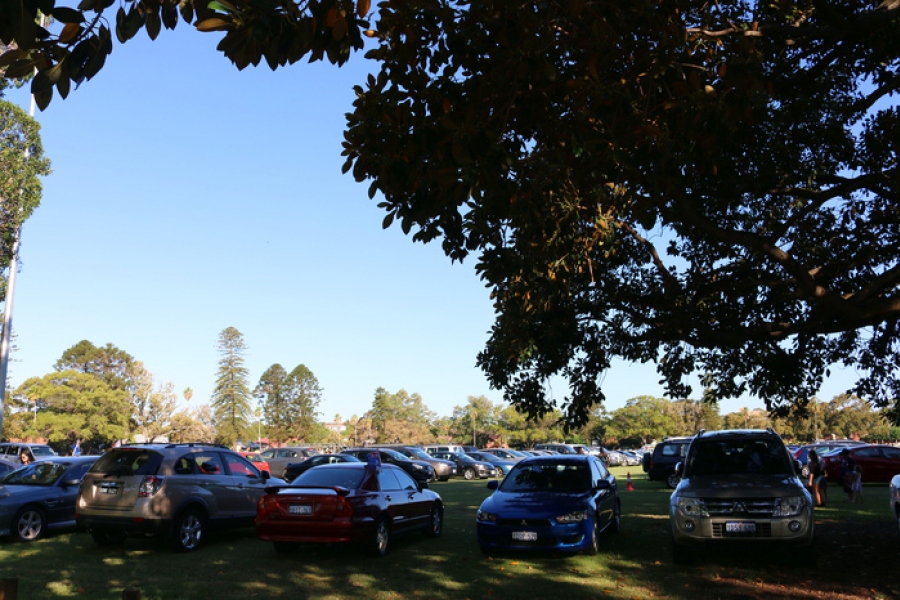 There are some people who find the city crowd too much and local councils hold their own parties around the suburbs, but the city really is the place to be on this special occasion. Nothing else comes close. 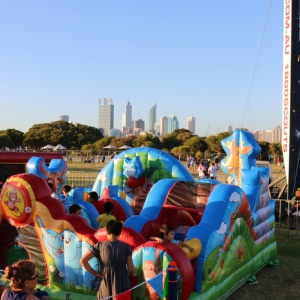 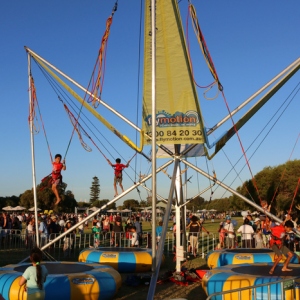 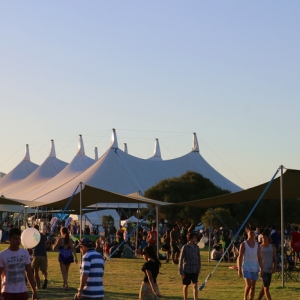 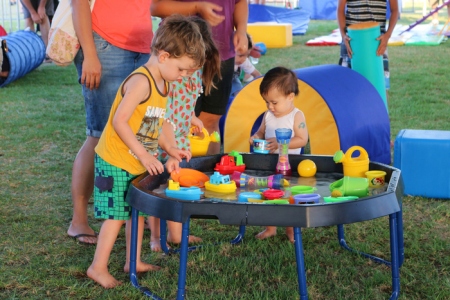 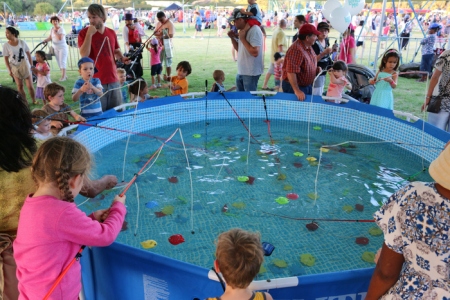 While we live North of the River we have been attending South of the River for the skyworks for many years with a big group of friends. The new Celebration Zone is an added bonus now that we have kids. 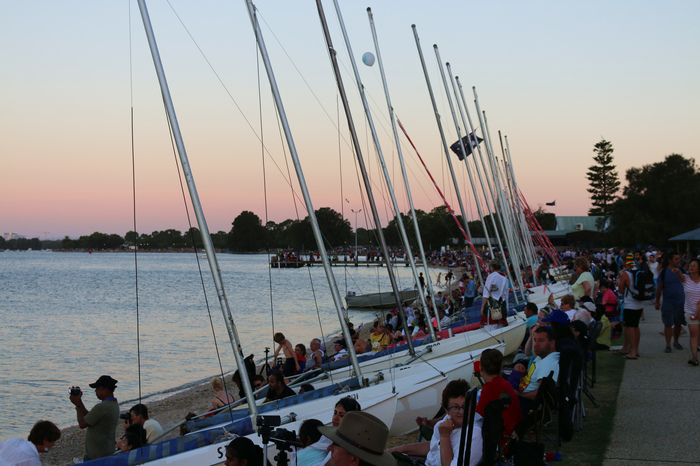 There are designated BYO picnic spots, but you won’t find many Aussies paying heed to that rule. Just be aware the cops are on patrol and will be fining you if you are drinking alcohol in public. 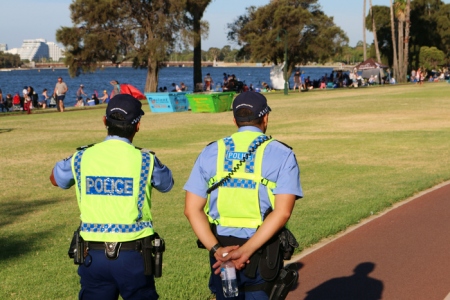 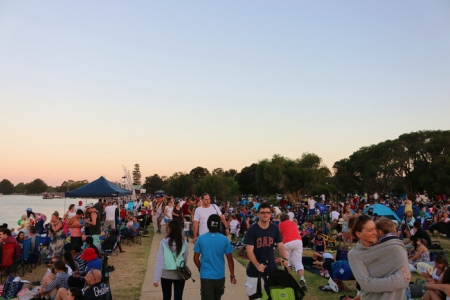 Most Aussies will bring their Esky.  Esky is an Australian brand of coolers that quickly became the collective name for any sort of fridge box. Loaded up with snags (sausages) for the barbie, salads, lamingtons or pavlova. Of course there is the younger generation who just bring take away or snack food – chips, lollies, chocolate (although not such a great idea since late January is the hottest part of the year).

You probably want to bring a picnic blanket, umbrella and chairs. We’ve also seen mattresses or splash pools down on the river shores as well. 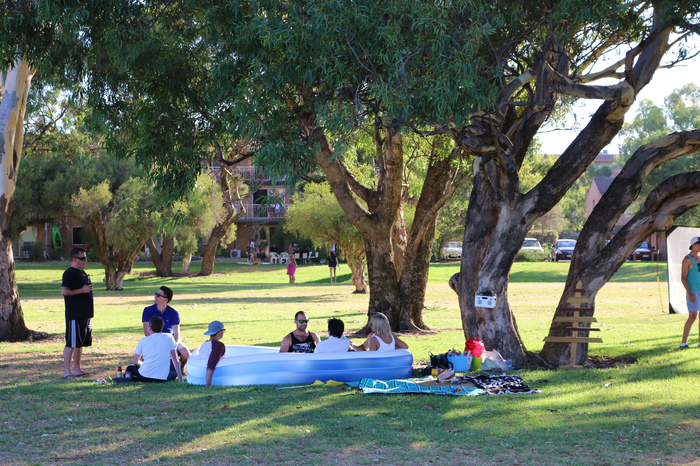 A portable radio is a good idea as Aussie tunes play all day long. Don’t forget the sunscreen, it gets very hot during the day, but maybe also pack a jumper/sweater just in case the evening is cool. 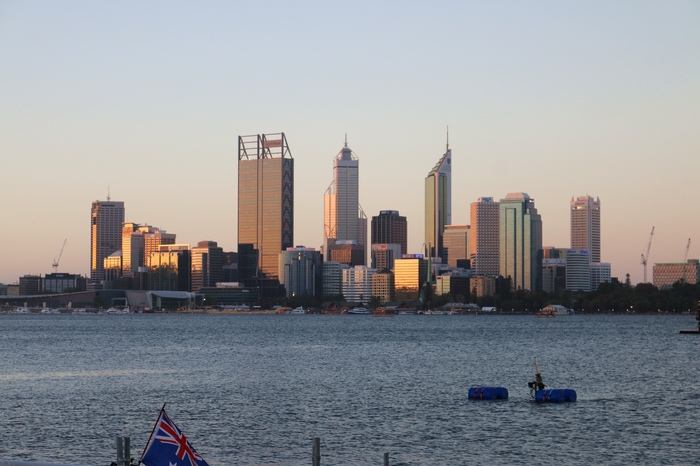 What Not To Bring

The City of Perth prohibits people from bringing large stereos, spas, fridges and other large objects to the foreshore on Australia Day. If you’re clever enough to bring a spa down to an open park, and get it working (without any power outlets nearby), then in my opinion you deserve to keep it there.

Generally most people spend the day drinking and laughing, playing cricket or frisbee with their friends in the hot Australian sun. We love spending the afternoon eating and talking with all our friends and in recent years taking the kids to the kids play zone.

At 8pm the fireworks start accompanied by Australian music from the local Mix 94.5 radio station. If you miss this Channel 7 often plays a delayed telecast around 10:30pm. 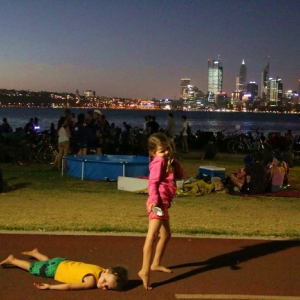 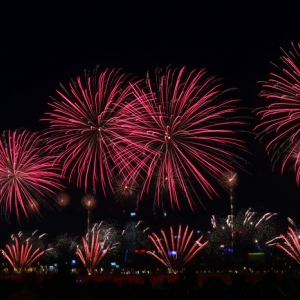 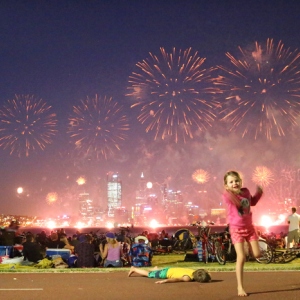 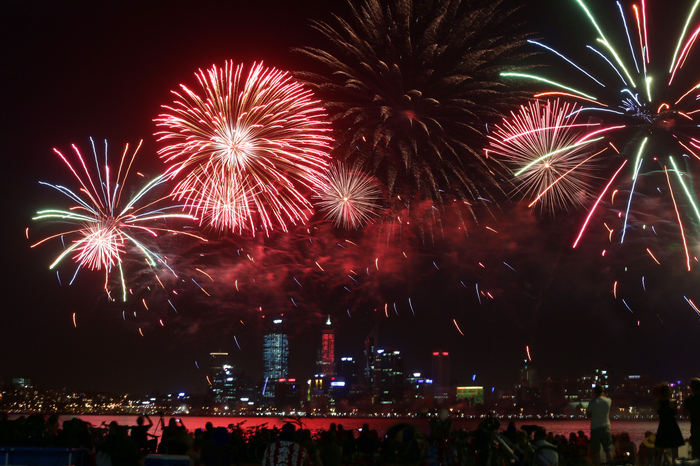 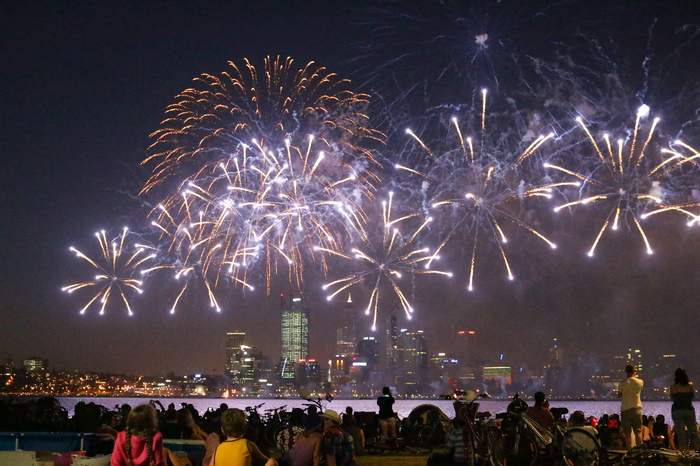 The day encapsulates the soul of Australia with its laid-back fun, sports, food and beach. The comradeship felt by one and all makes this day an event not to be missed if you are visiting Perth on the 26th January of any year. Oh and by the way, it’s a public holiday, which means if you are lucky enough for it to fall on a weekend Monday’s the day off to recover. A long weekend is definitely worth celebrating, oh yes, and the foundation of a country too.

"I respond to every comment by private email. So please leave me comments, I love chatting to you" - Josh Bender
Posted by Kara on Feb 6th, 2014
Just found your travel site! I love how you shared all the things to see and do for Australia day! If it was me I would be taking my kids out on the water! I started a Travel blog that showcases reviews from families/couples. Stop by sometime!
http://peekabootravel.com
Posted by car rental glenelg on Feb 7th, 2014
I have never been to Aus in time for Australia Day.It looks so beautiful and really a magical city.That’s great bunch of information. I want to thank you for sharing this informative post. The last point of this post attracts me the most.
Posted by freshnod on Feb 8th, 2014
Australia is my dream country. I can’t wait to visit Australia. it looks breathtaking.photos are really unbelievable.Thanks a lot.
Top Places to visit
Posted by Michael Orobona on Feb 15th, 2014
It's too bad so much of the green space in front of the Quadrant (near William Street) is gone. That was a great place to watch the fireworks.