What Do You Mean Exciting Food In London?

Nicole had our attention. We heard about the Eating London Food Tour she organised in the East End and I wondered if it could really be possible. When I thought of British food, I thought of bland flavours, plain dishes and an overall lack of excitement. I never thought of doing a food tour while we were in London. So we went along to see if 2 fervent food lovers could be impressed with classic British fare.

We met Nicole, the tour leader, along with the other handful of curious tourists at Spitalfields Market in the East End of London. A fellow Aussie, she relocated to London and has got to know the real East End inside and out. Now she has recently started sharing her experience and expertise in a well-organised food tour. This tour is part of the same company that ran the Eating Italy food tours we enjoyed in Rome.

I have to apologise in advance since the photos on this post are not up to our usual quality due to a rather unfortunate incident later in the afternoon after the tour when my camera didn’t end up making it home with us and I lost all the photos of the whole day. So all we have are mobile phone snaps, but hopefully you’ll get a pretty good idea of how our day went.

After the greetings and introductions we got started towards our first destination, St. John Bread & Wine. As soon as we stepped through the door the smell was intoxicating. If they ever sold a perfume with this scent, they would sell like hotcakes. We sampled the bacon sandwiches, which feature a unique preparation process that involves soaking the bacon for 2 weeks in secret brine. It’s the only place in the world you can get this amazing bacon. The meat was juicy, succulent and definitely left me wanting more. The homemade tomato sauce also hit the spot. This restaurant utilises nose-to-tail cooking so no parts of the animals are wasted, and the menu changes daily so you will always get a (pleasant) surprise when you visit. It has been rated as one of the top 50 restaurants in London, and we can easily see why. 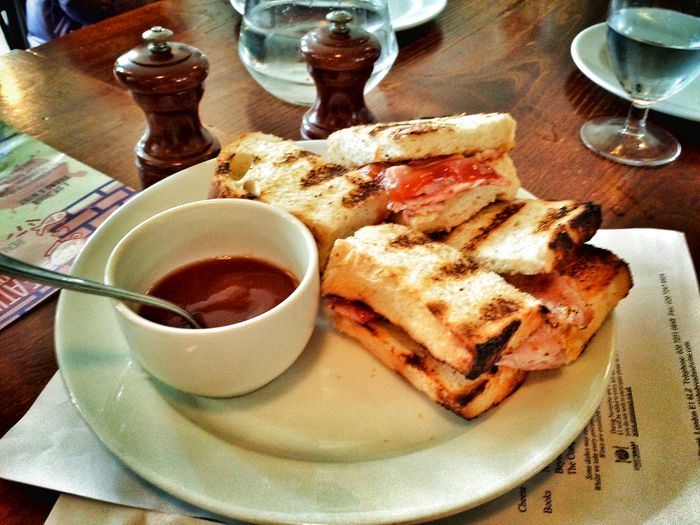 Next on the menu was The English Restaurant. This is one of the oldest houses in the area, established in the 16th century. The interior is decorated with timber re-purposed from a 17th century church. Here we sampled the humble bread pudding. But this was no ordinary bread pudding. If bread puddings had a king, this would be it. We have tried this common dessert in several countries and Erin had never been a fan until now. The English Restaurant has done something worthy of accolades. 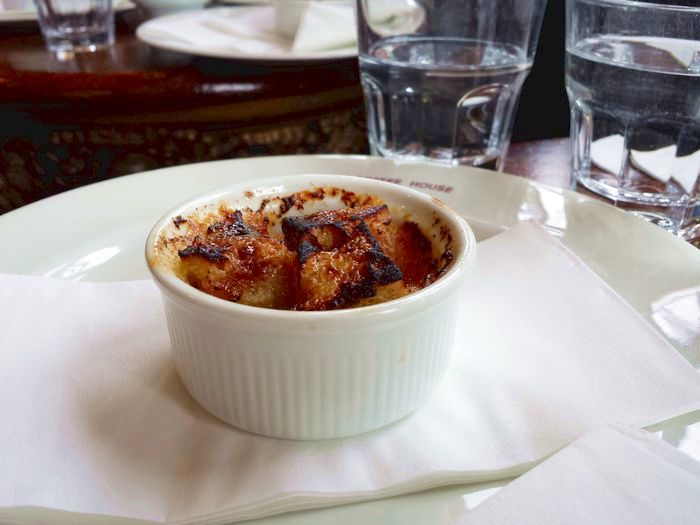 Back in the Spitalfields Markets we visited Androuet, a cheese specialty store originally opened in France. The young founders of this particular store are very passionate about cheese and mature their own cheeses in a cellar below the store. This store is home to an award-winning blue cheese claimed to be the best in the world.  We sampled several flavourful cheeses including Waterloo Brie, Cheddar and Stilton. 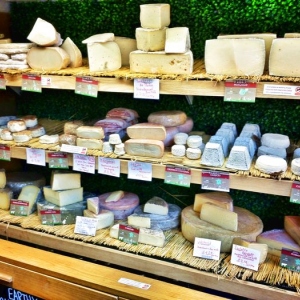 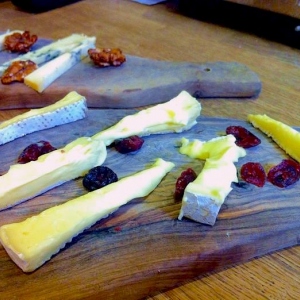 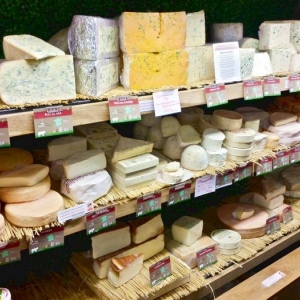 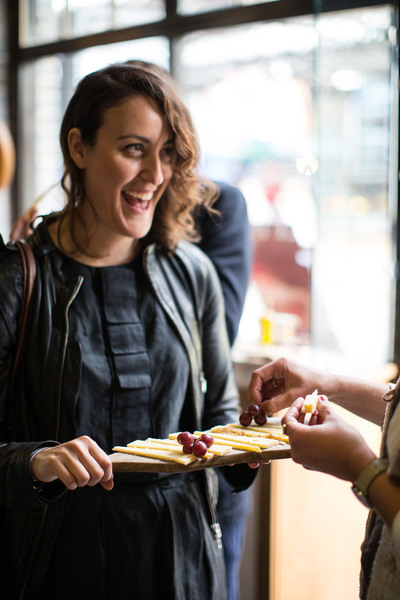 After a short walk we made our way to Poppies, known to be one of the top 100 places to eat in London. This iconic restaurant has been a finalist for 3 years in a row in the competition for England’s best fish and chips. And having tried their food, it’s easy to see why. The fish is caught fresh daily by 3rd generation local fisherman and prepared by hand in-store. I’ve never eaten fish quite like this. The batter was light and crunchy and the fish melted in my mouth. The chips were equal to the challenge. You haven’t really eaten fish and chips until you’ve experienced Poppies. They have taken this British staple to an entirely new level. Just thinking about it makes me want to fly half way around the world to eat there. Australian's number one take-away food is Fish n Chips, but none compares to this. 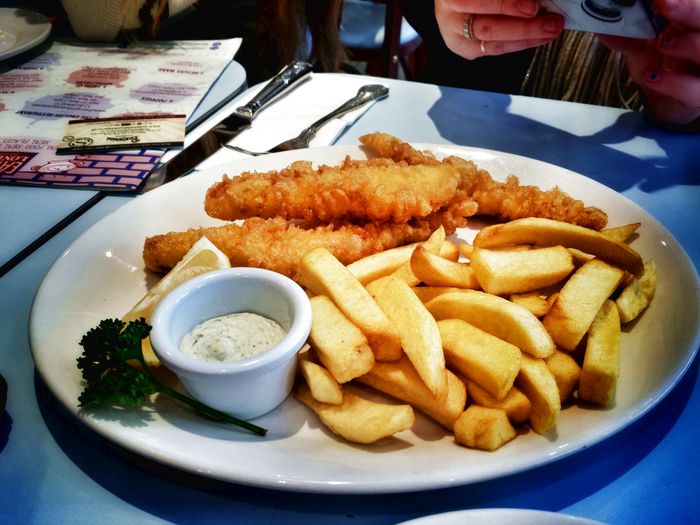 Next we took a walk through several historic streets that have been home to various migrant groups over the centuries, from Irish to Bangladeshi. We saw a building that started out as a church, was re-purposed into a synagogue and now turned into a mosque. Nicole took us to her personal hangout spot, the Pride of Spitalfields. It was a small, cosy pub with a range of beers and a famous permanent guest – Lenny the cat. This pub is home to the Best British Cider of 2012 and considered by locals to be the best pub in the East End. We sampled a few local ciders and continued on our way. 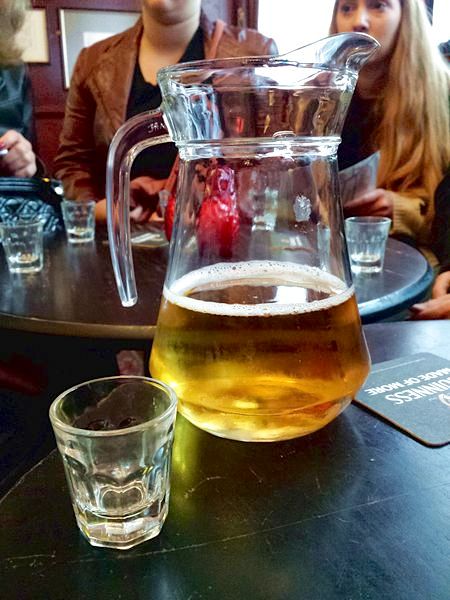 Just around the corner we found Aladin, a curry house that was rated by BBC as one of the world’s best curry houses. A restaurant visited by British royalty, celebrities and locals in the know. It takes a lot to stand out in this suburb, there are over 50 curry houses in just a 3 block radius from this spot. Nicole organised some of the best Indian food we’ve tasted in a long time, including lamb pathia, vegetable bhuna and chicken madras. You might not think of curry as being particularly British, but it is actually the most popular dish in the country. 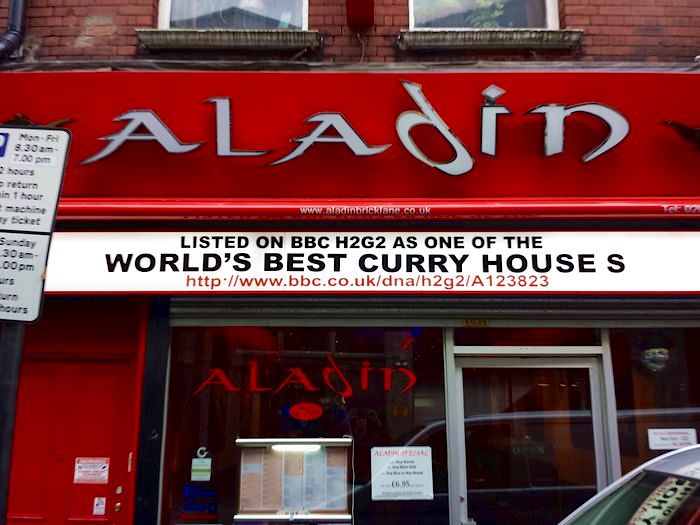 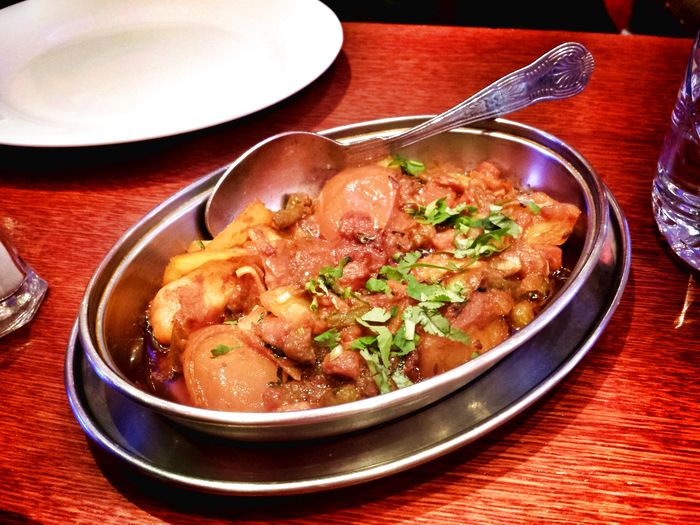 By this point we were really full, so Nicole lead us through the colourful and vibrant East End streets to free up some space in our tummies for what lay ahead. The street art we found was striking. Some of the world’s most recognised and in-demand street artists have left their mark on this neighbourhood. 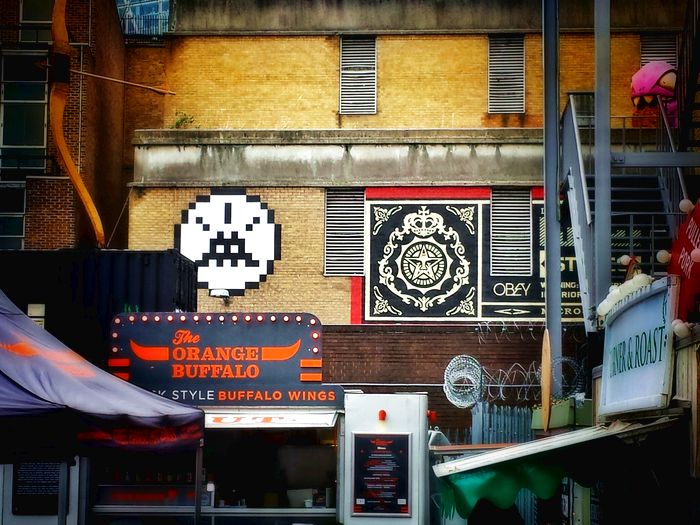 Our next destination, Beigel Bake, was so busy we had to wait outside while Nicole organised our food. This restaurant is 1 of only 2 bagel shops left in London, originating from Jewish migrants. It is open 24 hours a day and is constantly busy. It reminded us of the New York delis we ate at. The succulent, tender, corned beef was deceivingly simple yet mouth-watering. 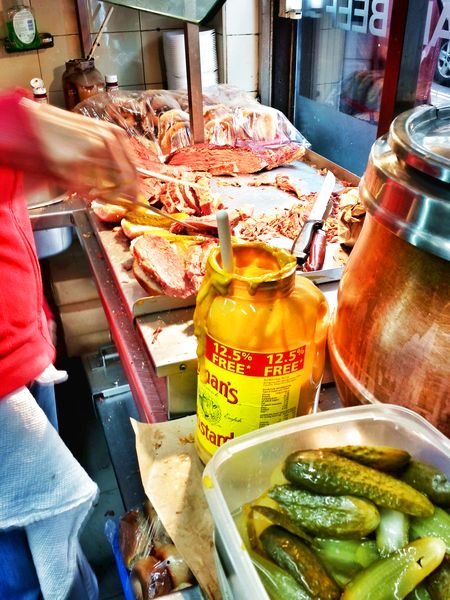 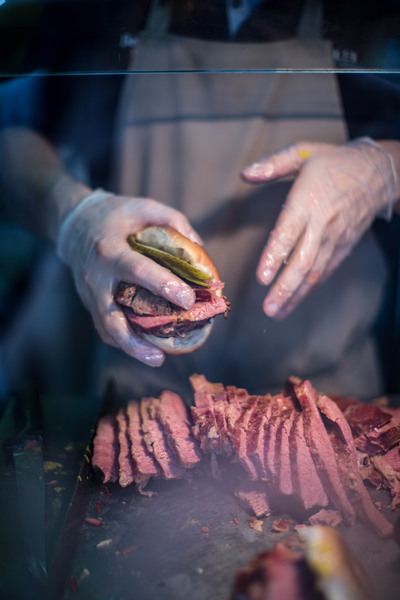 The last destination on our tour was Pizza East for a slice of salted caramel tart and tea to finish off what was essentially an 8-course meal. The interior décor was quite elegant and modern, but unfortunately the restaurant didn’t allow guests to take photos of it. That seemed kind of strange in the era of see-what-I’m-eating-on-Facebook and food-flooded Instagram.

By the end of the tour our bellies were extremely full and our tingling tastebuds had sampled the tastiest food London had to offer. What I loved most about this food tour was the sample sizes were in actual fact meals and we didn’t need to eat again for the rest of the day. But, more importantly, I had found the answer to my enigmatic question – was there exciting food in London? Well, I can confidently say “it was splendid, old chap” and it has left me hanging for more.