Can a 3 Year Old Enjoy a Manduca Baby Carrier?

Our package never arrived in Gautemala as planned and we carried our 3-year-old son everywhere. Luckily the team at Manduca managed to catch our package and redirect it to New Orleans where it was waiting on our arrival. 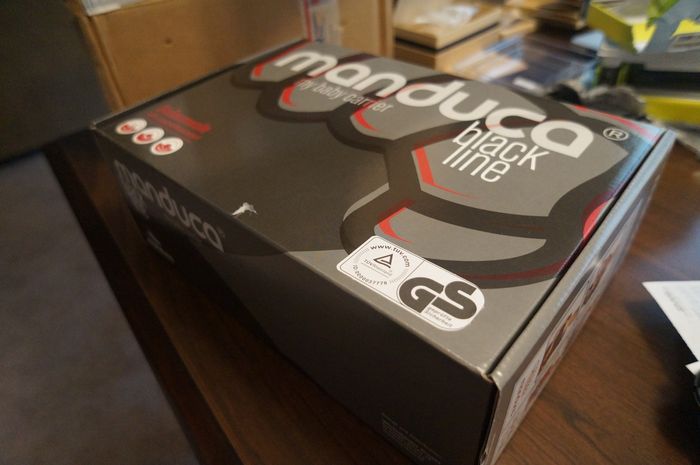 As we unpacked this precious gift I was very excited. My son is a cuddler. He loves to be held and carried and fall asleep in my arms, so this was sure to make that part of him more comfortable for us and for him. I wanted to encourage this side of his nature and it is hard to do with loaded hands on cameras, bags and other things. 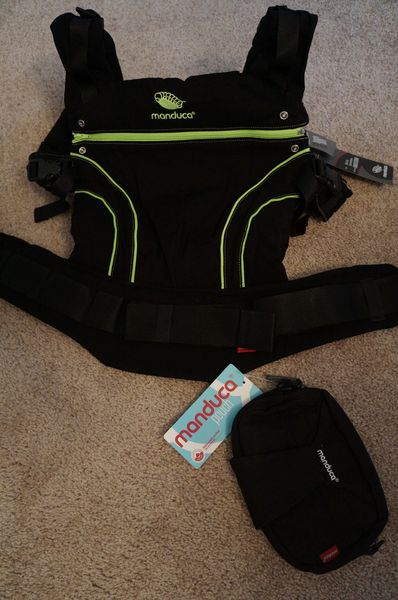 The Manduca is easy to put on. The straps are thick and comfortable on the shoulders and the special zipper to make the carrier bigger or smaller is a fantastic piece of technology.

The first time we used the Manduca he cried. I guess there was a lack of control he was not used to, but soon Daddy was galloping through the streets of New Orleans like a horse and he was fast asleep. 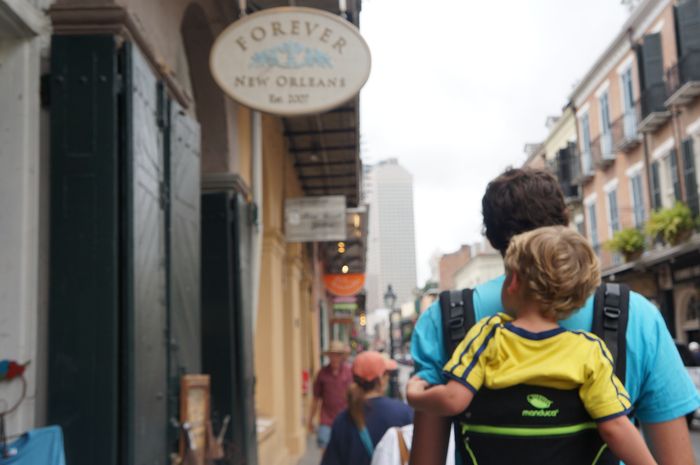 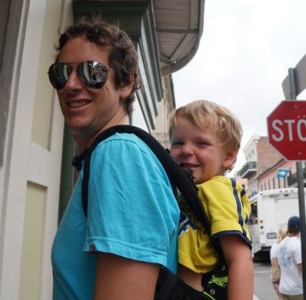 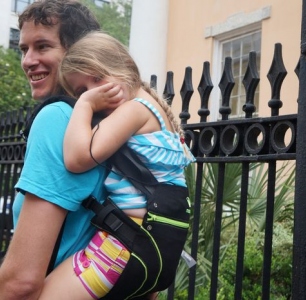 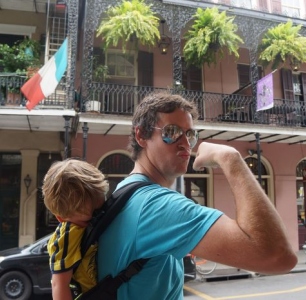 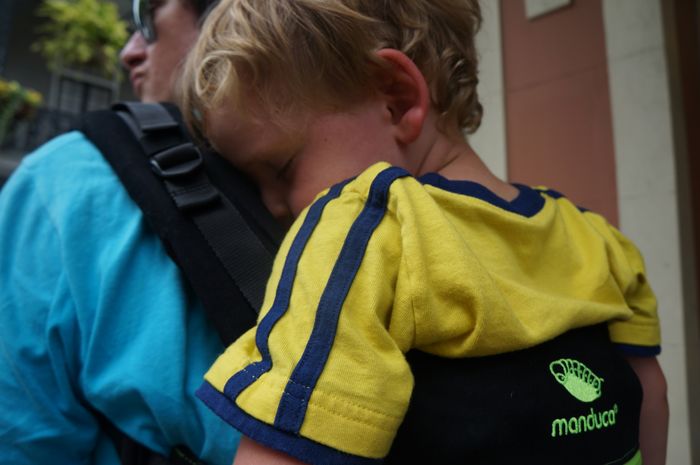 Having owned a carrier previously I could see how this Manduca was different. For instance it will carry newborns through to 4 year olds. With our last carrier we stopped using it before they were one. It also has this ingenious little piece of material that pops out to cover the head so the sleeping baby doesn’t roll around like a flopsy watermelon.

Caius has admitted it hurt his legs where they press into on the thigh, but with tips from the courteous staff at Manduca we were able to loosen the straps and try again. They have these helpful videos on their site, which show you how to put them in and carry them properly so that there is no issues.

The next time we used it we were hiking to Lower Yosemite Falls. We had contemplated the pram, but were so glad we didn’t. Josh started with Caius on his back, but found the weight a little unbalancing as he climbed over the rocks. Caius, again, while started laughing at the piggyback, was also complaining about his legs. 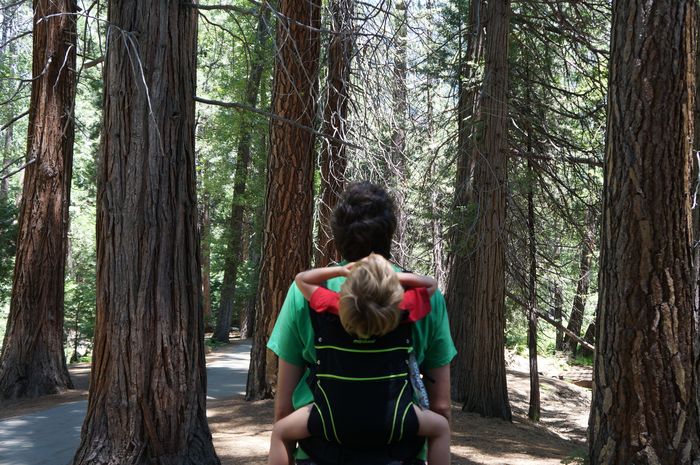 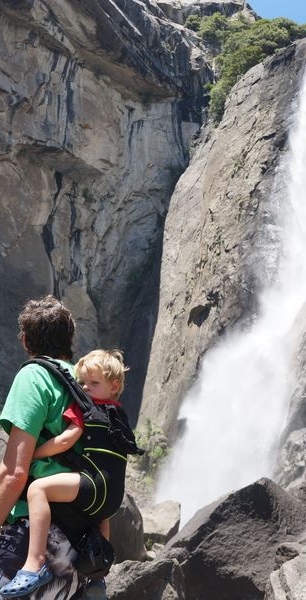 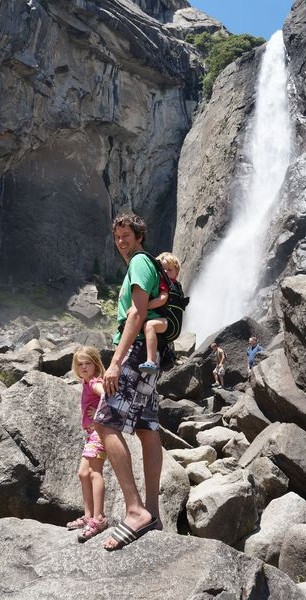 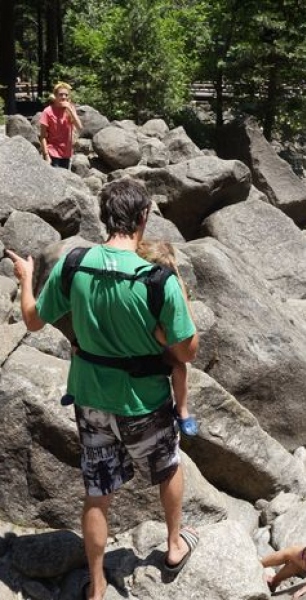 Knowing he loves to be held in the front we decided to try the front. While he is very tall for this position he did love it. He fell asleep in that comfortable rocking position. His head lay on his daddy’s shoulder and he smiled sleepily at us. It was also easier for Josh to maneuver over rocks with better balance. 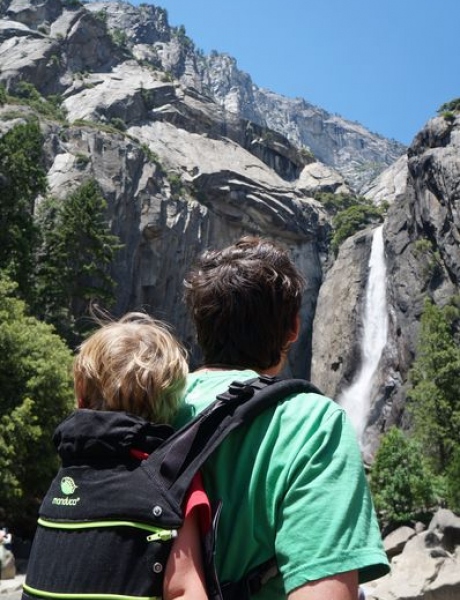 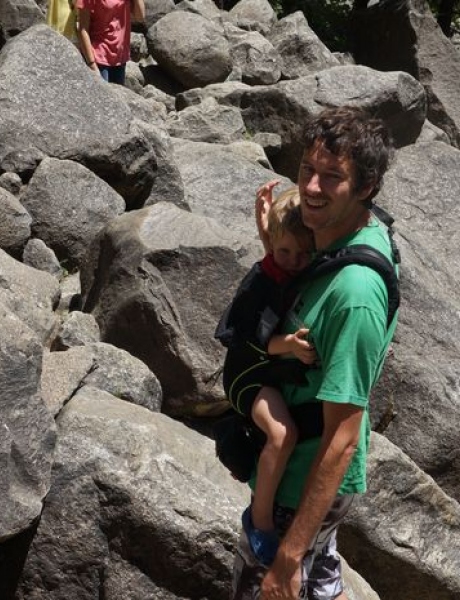 Overall we are extremely happy with the Manduca, especially since we thought my son was past any help at his age and height. My husband would love to see even thicker straps and a solution to my son’s sore legs, but other then that we plan on using our Manduca until my son doesn’t fit any more. Which could be a while since our 4-year-old daughter enjoyed a quick piggyback ride in it.

Parents beware this will make travelling easier and you will want to go more often... It may even cause you to hike - that was a first for us! 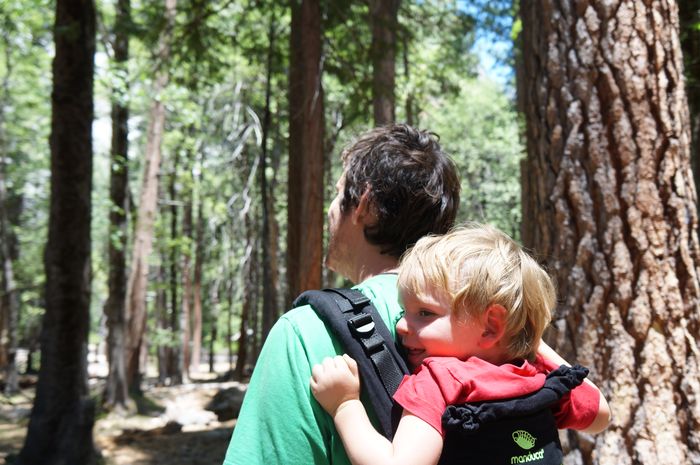 "I respond to every comment by private email. So please leave me comments, I love chatting to you" - Josh Bender
Posted by Karin on Jun 19th, 2013
Great carrier I guess it is because Caius has such long legs lol
Posted by Madeline (The Places We Go) on Jun 20th, 2013
Great review! I know we have talked about carriers on facebook. We chose the kinderpack for our 2.5yo because the toddler size has a wider seat base that extends all the way to his knees. Even then he sometimes says it's cutting in so it depends on positioning too and making sure the weight is in the bum not on the thighs, with knees higher than bum. I've also read good things about the tula carrier.
Posted by admin on Jun 20th, 2013
Oh that is so great to hear about the knees higher then bum I will try that, thank you!!
Posted by Sensi on Jun 20th, 2013
Hi there, good to read about your 3 years old in the carrier and good to know that it works! But..Dads shoes on these rocks...it's very dangerous, i never would do that. Take care :)
Posted by admin on Jun 20th, 2013
You are right! He thought we were going to the beach, but when we saw this waterfall we could not just go by it. However we hiked it all and had no mishaps at all, totally worth the risk!
Posted by Laura on Sep 18th, 2013
You could try attaching something like a stirrup to both sides of the waistbelt. You could just take scarfes or something like that and tie one to either side so he can rest his feet in and his legs are not drawn downwards.
Thereis one carrier that has something like it integrated but it's easy to build it by yourself.