I'm Not Crazy for Driving in Bali! 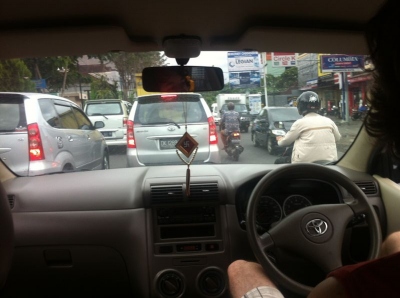 I have been asked so many times why I chose to drive in Bali? Do I have a death wish? Am I an adrenaline junkie? Isn’t it dangerous, scary, out of control?

The roads of Bali are a mess. Not only are most roads physically impaired with giant pot holes, no markings, no speed signs, but the traffic… cars on one side, bikes on the other and in front and behind. Not to mention the lights that have several intersections going off like a clock in which half the time people don’t even acknowledge, oh and did I mention the roundabouts which no one goes around or the lines on the ground which don’t mean anything and a 2 lane road which is often 3, 4 or 5 lanes at any given time?

It’s an accident waiting to happen and for us Western people who find this fascinating and so dangerous the pleasures of having a chauffer drive you around for $40 a day seems a small price to pay. But what if you could do it cheaper? A scooter costs a couple of dollars a day and the tourists flock to them. I had no interest in a scooter since ten years ago my husband and I hired one in Phuket and I came off of one. Not only that but with a 2 year old and a 3 year old I did not see that working and for all sakes and purposes why would you want to be on a road in a scooter with nothing but a hard hat on your head when you could get a car with a bunch of metal between you, the road, the holes, the elements and the other drivers?

Hiring a car in Bali is easy to do; everyone has one or knows someone who does. We managed to hire one for 150,000 rp (approx. $16 AUD) per day. This includes full insurance. You need to make sure that is on the paperwork when you hire it so you don’t get caught out. Ask for the excess rate as well.  This price is for a 7 seater car, so be prepared to bargain down if you are wanting a smaller car. We like the 7 seater because for the longer day trips both my kids get a full seat to lie down on and go to sleep… can they do that on a scooter?

Fuel is about 150,000 rp ($16 AUD) to fill up and really doesn’t run out very much. It works out to be less than 50 cents per litre. There are no other costs associated with it. This is approximately how much my car back home cost me, before the rego, insurance and licensing…. And fines.

I didn’t drive for the first 2 weeks, it looked crazy and I admit terrifying. My husband drove everywhere. Our first trip to Kuta from Ubud took 2 hours… Our 2nd trip 1 hour.  He hardly ever drove faster than 50 km an hour and we rarely drove at night. The first time I drove I had to. I was meeting a friend in town and all of a sudden it was time.

I’ll never go back. In fact my husband knows I love it so much he lets me drive everywhere now. Driving in Bali is actually freeing. There are hardly any rules so you can do what you want and it works. The tooting is friendly and cautionary, as opposed to bullying and threatening. You can change lanes without indicating or just drive in the middle of the lanes. The round abouts are confusing and when in doubt following another car is always easiest. It can get hairy at busy traffic lights when all the bikes come in front and around you, but you let them take off and follow behind them and soon they are on the left scooting out of your way as you zoom past them.

Some little courtesy’s I have learnt while here: 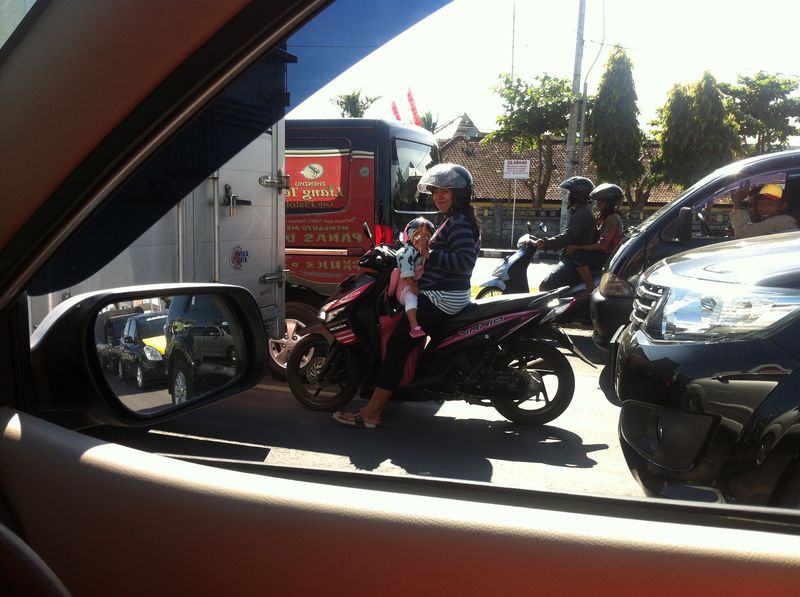 We have been using our iPhone GPS to navigate. It doesn’t require Internet to run (although it does to search a destination) and the blue dot is very helpful. Still having a navigator and driver is better for this, since driving requires full attention. A lot of places in Bali (well where we live) are actually not mapped and it’s been fun just driving around and learning where to go and where NOT to go.

So am I crazy? Well I will let you be the judge, but we have been driving over 6 weeks now with no accidents or bumps and have never seen an accident either. (Well except for the little mishap with the dog I ran over, but that doesn’t count.) Everybody is courteous, bikes move out the way and no one wants to be in an accident, they love their cars and treat them really well…. It’s a shame not the roads, but let’s face it all those bumps and curves and twists – it’s never dull.

Driving in Bali is like living your life. You can get a driver and be “safe” in the back of his car, while someone steers your life for you. Your boss, your bank, your debt. Or you can get out on the road, go over some bumps, but still be free as bird, driving where you like, when you like for much less!

"I respond to every comment by private email. So please leave me comments, I love chatting to you" - Josh Bender
Posted by Karin holmes on Jun 9th, 2012
Great Erin