Why Missing The Northern Lights Wasn’t A Bad Thing

The wintery wind whipped past my face and gently falling snow splattered against my helmet visor. An arm firmly swung out from a few metres ahead and the line of roaring snowmobiles stopped.

The moment had come.

I slowly stepped off the vehicle, moving like the Michelin man in my puffy outfit. Craning my neck I looked to the sky in search of the Northern Lights.

Snow silently fell gently, softly, delicately, catching on my eyelashes and melting onto my face.

I blinked once. Twice. And finally my vision was clear. There above me was the night sky in Lapland... filled with… 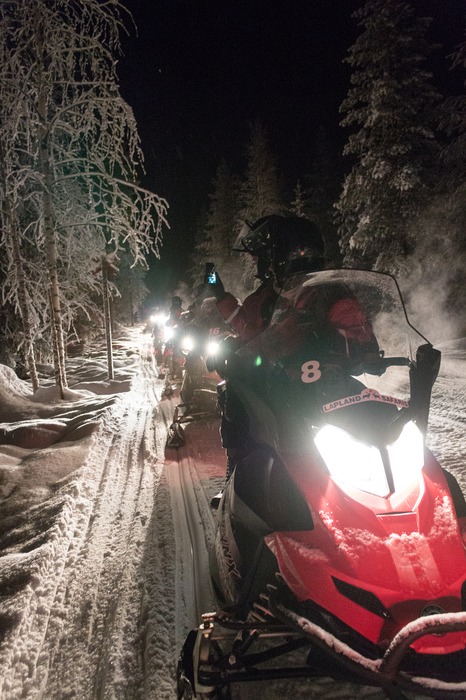 High on our family’s winter wish list was to witness the majestic Northern Lights. Even my kids knew we were heading to Lapland, Finland to chase this indescribable phenomenon. We had researched everything we needed to know – clothing, weather, tours, photography techniques, you name it. We were ready and chomping at the bit.

Lapland Safaris asked us on their Aurora Borealis Safari by Snowmobiles and after such a successful Husky Safari we were excited to accept. 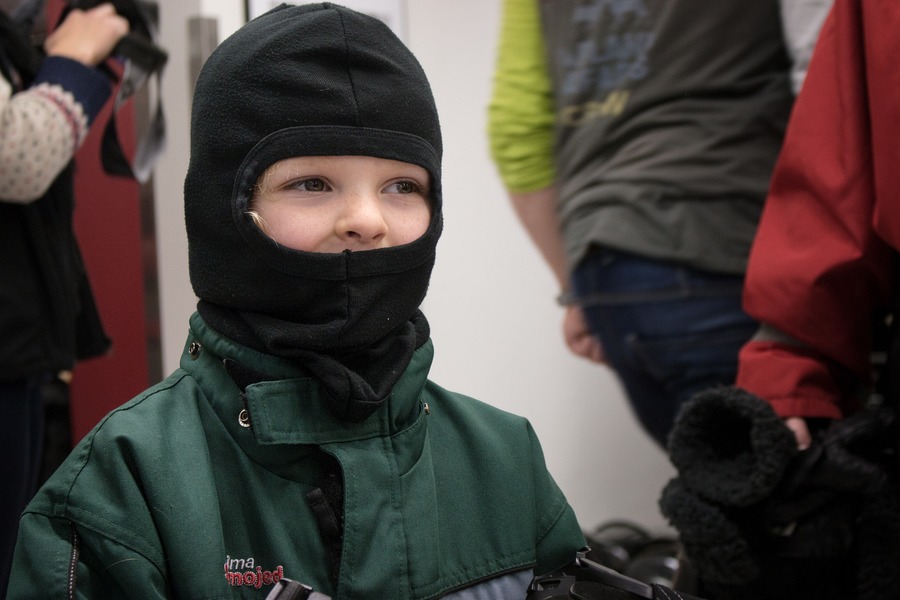 We met at the Lapland Safaris head office in the centre of Rovaniemi at 5:30pm to get suited up and ready for departure at 6pm. They had kindly let us hold onto our suits from the husky ride 2 days prior, so we arrived already dressed and prepared. We stocked up on helmets, scarves and gloves before hopping onto the bus which drove about 10 minutes to our waiting snowmobiles. 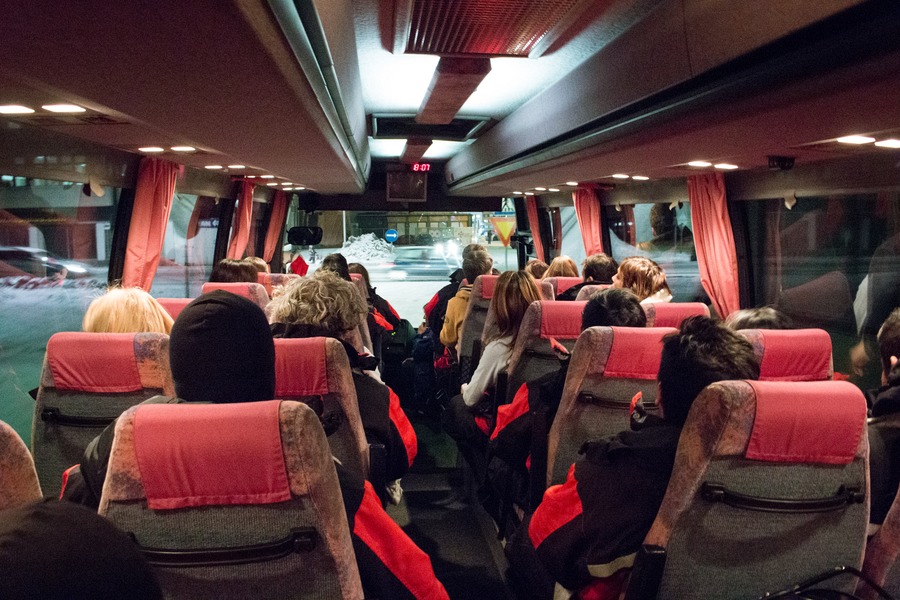 Our tour leader provided some basic safety instructions and explained the meaning of hand signals he’d be using.

The kids were relieved to find out they would be taking a ride on a sleigh pulled by a staff member on a snowmobile. We tucked them in with warm blankets and deerskin, and then Josh and I hopped onto our own snowmobile. 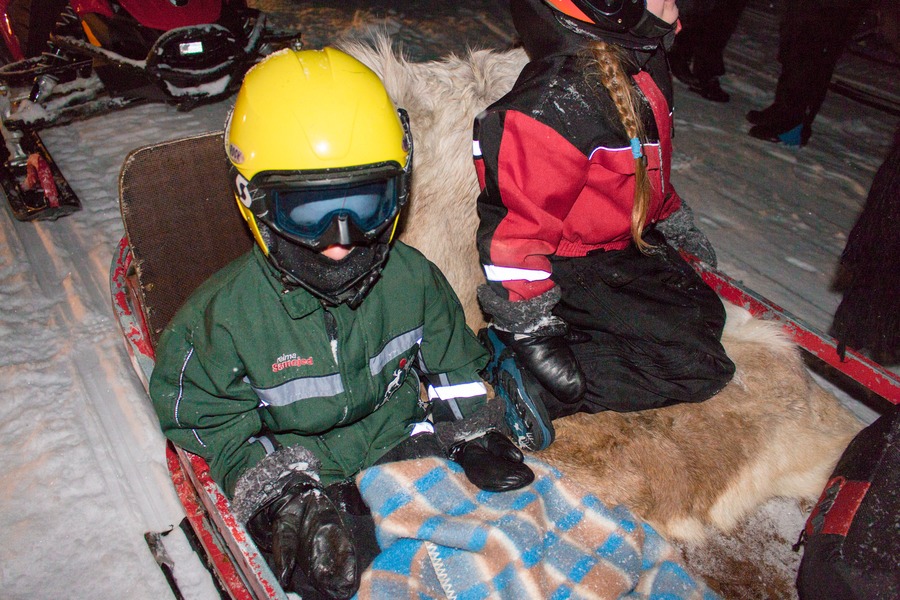 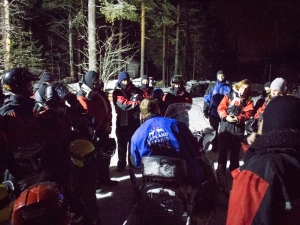 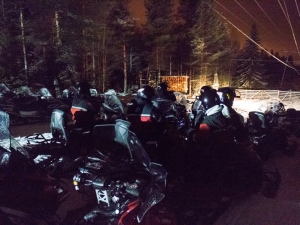 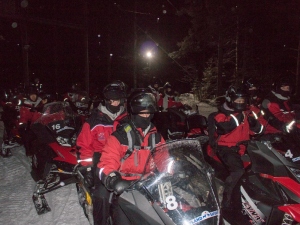 (it was very, very dark, so apologies for the darkish photos)

Before we knew it, our vehicle was skimming across the snow, snaking through the icy Finnish forest.

It was cold, at least it looked cold. Not as cold as it was supposed to have been considering it was mid-December, but for us Aussies it was cold. December normally means flip flops, BBQs and beaches. Now it was dark, and I was sure there were no BBQs (or beaches) for several hundred kilometres. 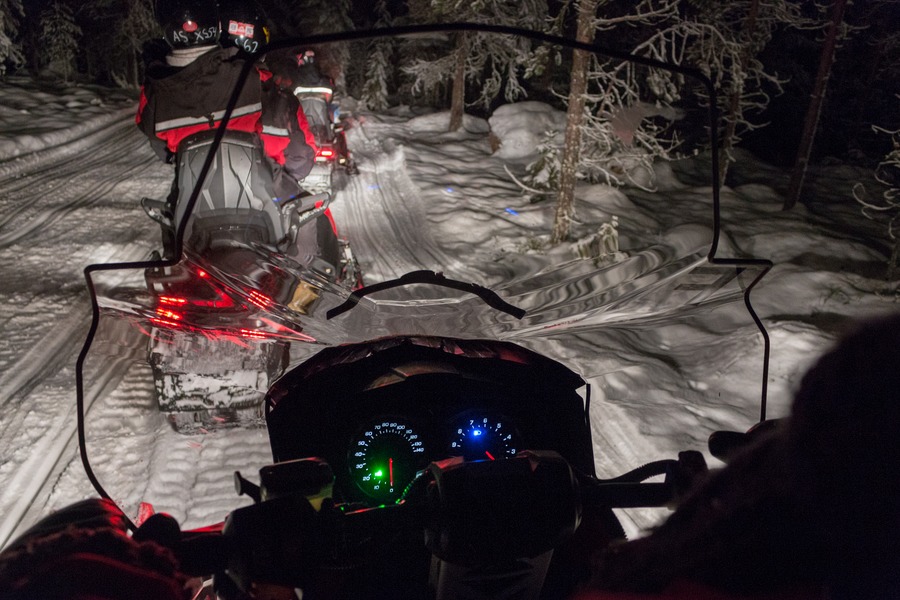 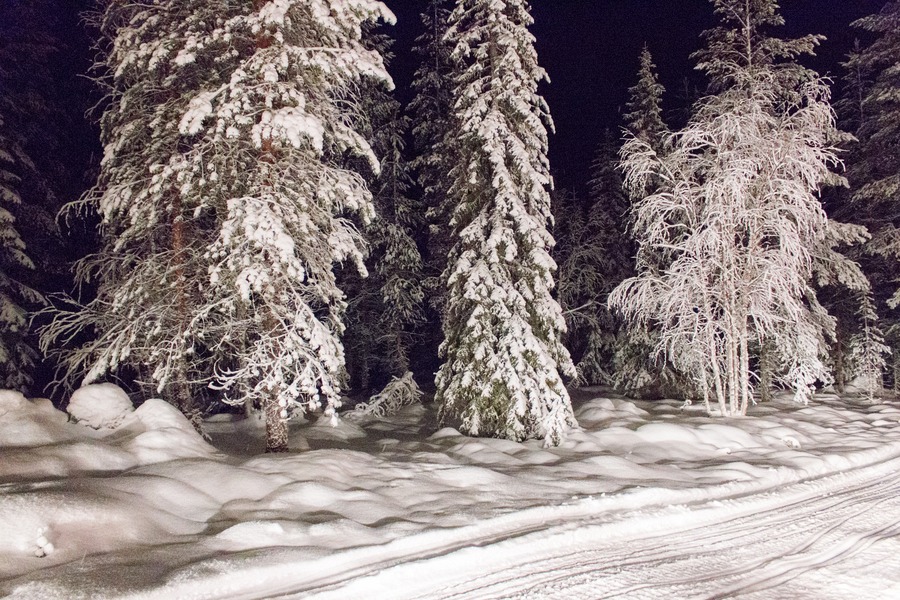 Once our tour leader’s outstretched arm was seen, and we knew what to do. The caravan of snowmobiles came to a halt. We were in the middle of nowhere, literally. Without the vehicle lights shining the way, the countryside landscape was pitch black. Snow was falling gently, and the trees were still. There was no wind at all. The flakes occasionally caught on my eyelashes and instead of the annoyance of momentarily blindness, I was fascinated with their presence, their shape, and the way they melted. 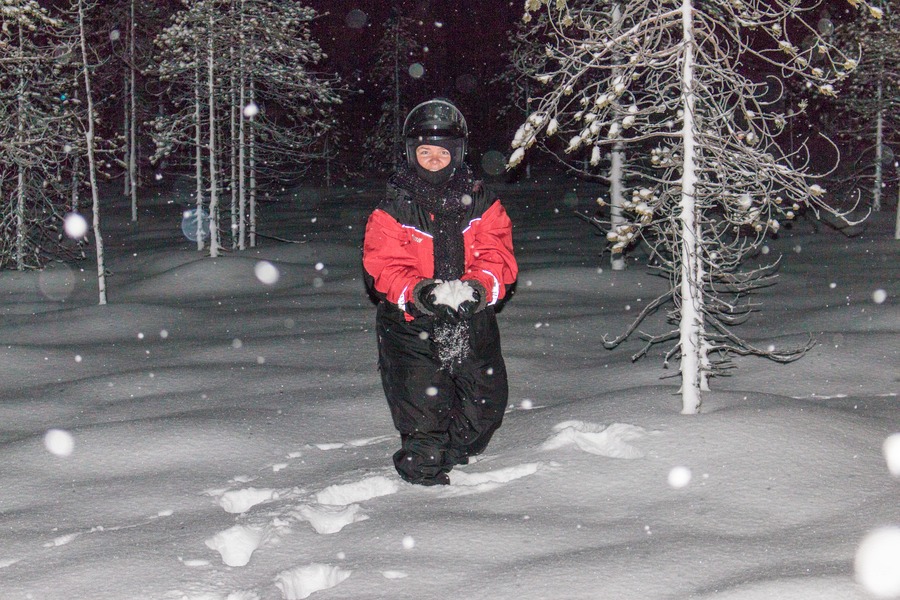 The kids took this opportunity to step into the deep crunchy snow and fell with abandon into it like they were jumping into a pile of autumn leaves or a heap of soft pillows. It was too hard to resist. Ignoring the conventional adult thinking, I threw myself onto the ground and we all stretched out our limbs, flailing like a flightless bird, making beautiful snow angels. 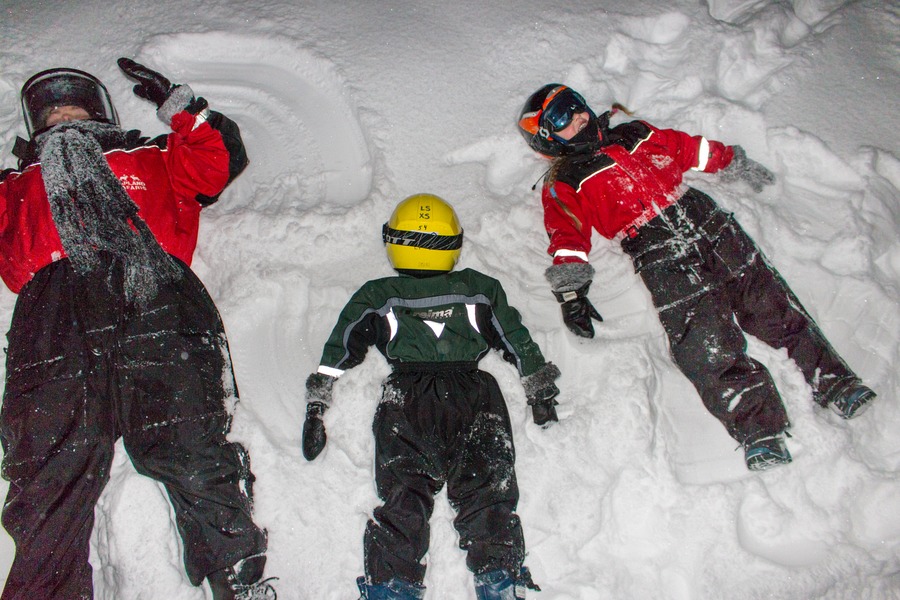 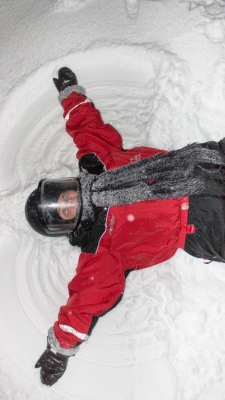 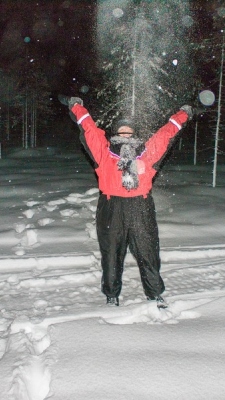 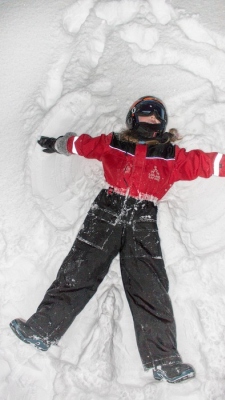 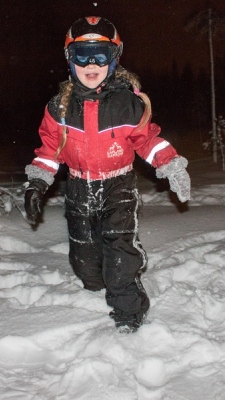 This was an experience I’ll never forget. The sensations were strange – I knew it was cold just by looking around and reminded by the small amount of bare skin exposed to the elements, but the thick suit kept me toasty warm the whole time.

It was during this break we were supposed to see the Northern Lights. Now we had been pre-warned at the head office that the weather conditions were not ideal that night. There was too much cloud cover. Argh! When I looked up, all I could see were low, thick clouds. But it wasn’t a monumental disappointment. Sure, we hoped to see the renowned dancing lights in the sky, but in all honesty we were still having as much fun as a kid in a candy store. Much more than I anticipated, especially considering the lights were a no-show. 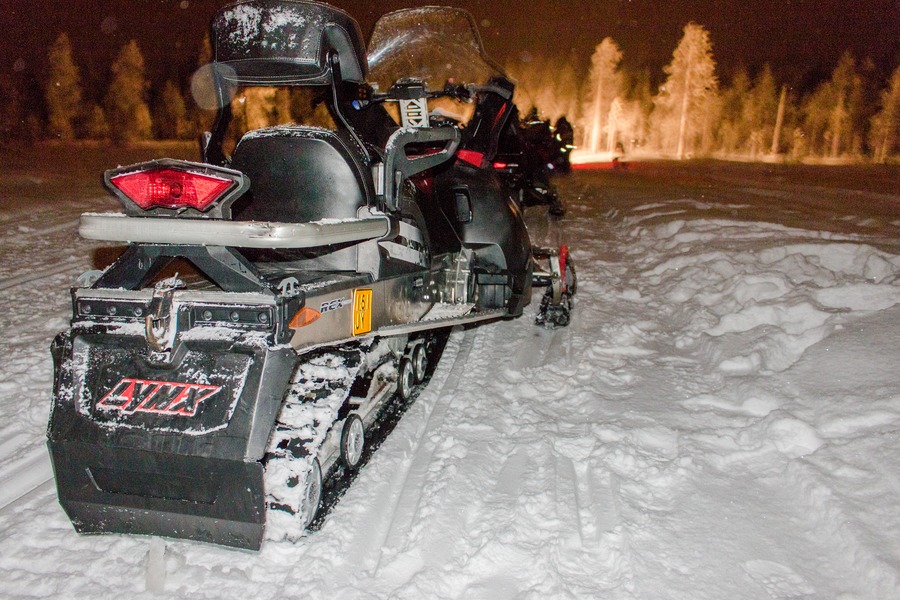 After rolling around for a short break we leapt back on the snowmobiles and continued through the countryside. Josh and I switched positions a couple times; taking turns to drive the snowmobile.

As we neared the end of our route, we stopped at a kota – a wooden tepee – which was lit up with bright, friendly colours. 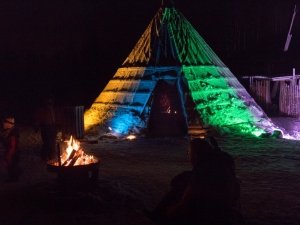 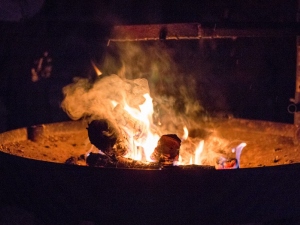 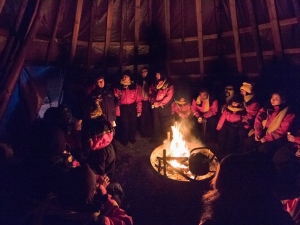 No, it couldn’t be! I rubbed my eyes, convinced there was a mirage in front of me. Would you believe it, but there was actually a BBQ in front of the kota grilling sausages! Amazing! They must have realised there were Aussies on the tour and didn’t want us to miss out

No, the sausages are a regular part of the tour, and we were also provided cups of yummy, warm berry juice.

After being guided into the kota, a staff member explained in great depth everything you could want to know about the Northern Lights. It was both educational and entertaining. Sitting around a roaring fire, sipping a warm drink and chomping on a sausage was a delightful finish to a surprisingly fun Finnish experience – even if we didn’t see what we came for. 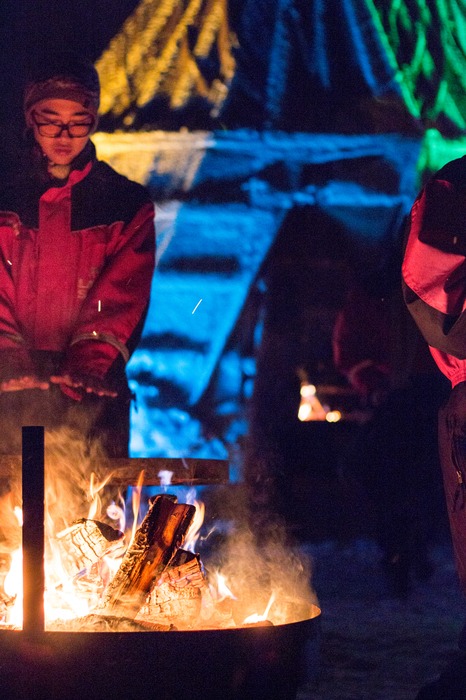 Once we were sufficiently warmed and fed, the tour leader guided us just 3 minutes further until we reached our starting point. It was getting really cold by this time so I abandoned Josh on the snowmobile (I didn’t have to twist his arm to take a solo ride) and joined the kids in their sled. We were tucked under blankets and both fell asleep snuggled next to me as we glided effortlessly through the frozen, white countryside. 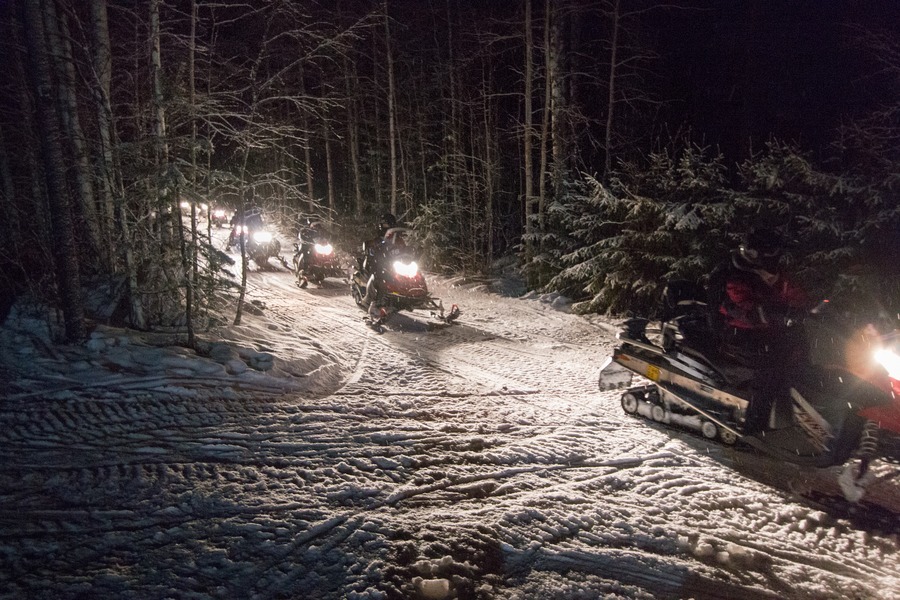 When we arrived, the bus was waiting to return us back to Rovaniemi. I waited for Josh to pluck a sleeping child from the sled and our first snowmobiling experience had come to an end.

The only things that could have made the snowmobiling tour better would be 35°C temperatures and the beach, or perhaps just clouds that could be controlled at our whim, because it sure would have been nice to see those Northern Lights. I think I’ll have to take those matters up with the only person who can do something about it. Santa!

During our stay in Roavniemi we stayed at Santa's Hotel Santa Claus. You can read reviews here.

"I respond to every comment by private email. So please leave me comments, I love chatting to you" - Josh Bender
Posted by Mark on Feb 21st, 2015
You may have missed the Northern Lights but I guess anyone can see that the entire family had fun, right? That's always the most important thing. The entire vacation is definitely pretty much worth it as long as you achieve that.
Mark
Hottubhideaways.com